Now, more than ever, the world needs trustworthy reporting—but good journalism isn’t free. Please support us by subscribing or making a contribution.

A group of Washburn Rocks volunteers congregate to paint rocks and socialize. 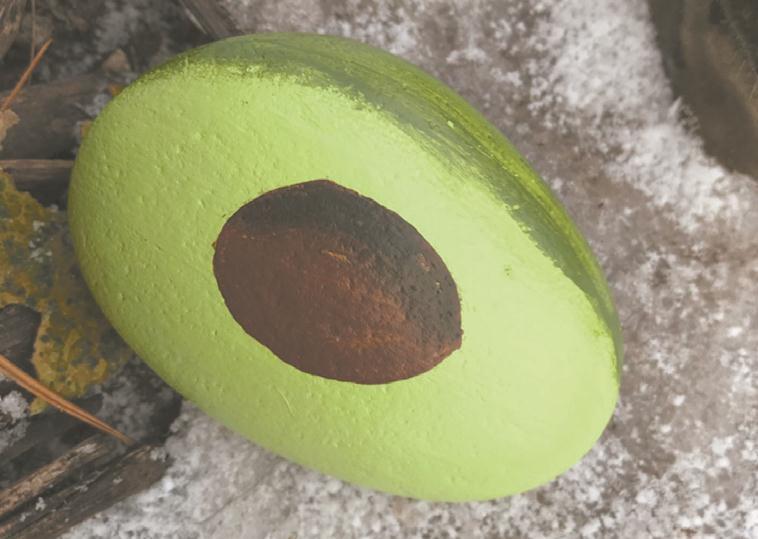 A rock painted to resemble an avocado is a standout example of the work of Washburn Rocks volunteers. 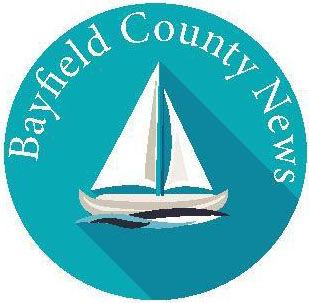 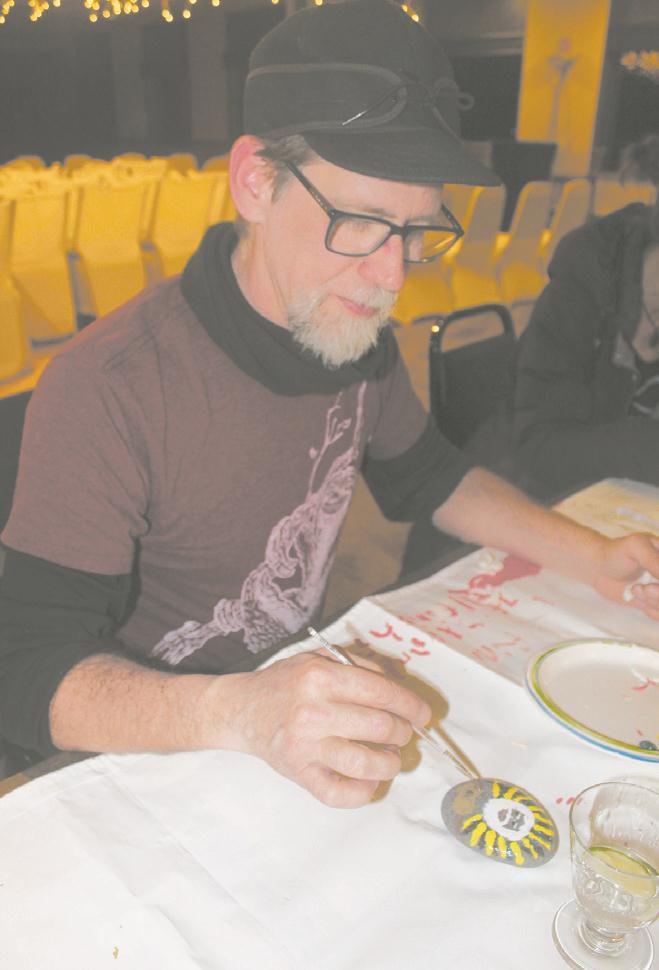 Scott McCafferty draws inspiration from his late friend Don and paints his likeness on a stone on Wednesday at Harbor View Event Center in Washburn. 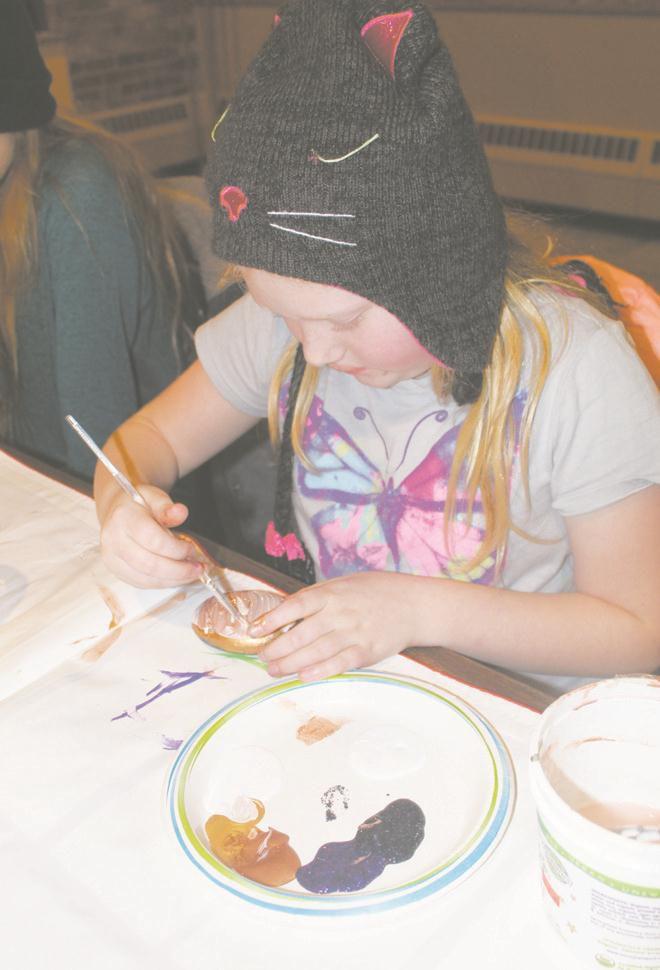 Nine-year-old Addi Warren paints a rock at the Washburn Rocks get-together on Wednesday at Harbor View Event Center in Washburn.

A group of Washburn Rocks volunteers congregate to paint rocks and socialize.

A rock painted to resemble an avocado is a standout example of the work of Washburn Rocks volunteers.

Scott McCafferty draws inspiration from his late friend Don and paints his likeness on a stone on Wednesday at Harbor View Event Center in Washburn.

Nine-year-old Addi Warren paints a rock at the Washburn Rocks get-together on Wednesday at Harbor View Event Center in Washburn.

I gazed upon a table littered with jars of paints, from acrylics to glitter, running the gamut of the rainbow from red to violet with a few funky shades thrown in the mix.

I nervously stood on the cusp of my debut as a painter of rocks. I hadn't lifted a paintbrush in a purely artistic endeavor since junior high, and my forays into the world of house painting are better left to the imagination.

I entered Harbor View Event Center in Washburn on a recent Wednesday evening knowing what to expect based on information from Washburn Rocks' Facebook page.

Volunteers congregate about once a month to paint rocks, which are then distributed in natural areas in Washburn for people to discover. The treasure-hunters are encouraged to take photos of the rocks and post the pictures and stories about the discoveries at #washburnrocks.

The rocks and supplies are free, so I personally had nothing to lose — except my pride — as I floundered amid a sea of paint, rocks and brushes.

Let's just say I paint pictures with words, and my art comes via camera lenses.

Not knowing where to start, I covertly emulated a couple of Washburn residents — Kate Stolp and Darlene Neff — who had blithely poured paint onto paper-plate palettes, picked out their brushes and already were merrily dabbing and brushing color upon smooth lake rocks.

I chose to ignore that they were newbies at rock painting like me and already had the hang of things.

Being drawn to shiny objects, I poured two globs of glitter paint — one in red, the other in blue — upon my paper plate for my first rock.

Lesson No. 1: It takes a lot of glitter paint to cover the stone with a decent base layer.

As I dabbed — because strokes just don't work well with glitter — I cast my eye toward the glittery rock Kate was working on and shamelessly stole her ideas.

I set aside the rock, determined to redeem myself on my second attempt. But first I performed some more covert surveillance of my fellow artists.

Pretending I was actually working as a reporter and photographer, I sauntered over to the table where Rose Lawyer, Michele Tegen and Scott and Gina McCafferty sat. I was particularly drawn to Scott's stone that showed the face of a white-haired, bearded man with rays emanating from his head.

Everyone burst out laughing.

No, Scott said, his late friend Don was the inspiration for the painting.

I then chose another stone, added some bold-colored acrylics to my paper plate, picked up an additional brush and returned to my table.

I rolled up my sleeves, determined to channel Bob Ross and paint some "happy little clouds." I ended up with sunflowers.

I laid a thick layer of blue on the top two-thirds of the stone and covered the bottom part with green. The others, of course, had wisely started on one rock, then set it aside to dry while tackling another.

Did I mention that all except two of the 11 people in the room were first-timers like me?

But Rose, who had set up the get-together, had a hair dryer ready for those of us who didn't want to sit around watching paint dry — even if they did have a glass of wine in hand to help pass the time.

I took another swing around the room, focusing on the table where Lynda Warren painted with her 9-year-old daughter, Addi, sister Tonia Al-Bahrani, and her daughter, Hazel Engstrom.

Addi, who had never painted rocks before, had quickly grasped the need to let layers dry before adding designs. Meanwhile Lynda was well on her way to creating a beautiful rock bearing an uncanny resemblance to Van Gogh's Starry Night.

Impressed by Addi's streaked base layer of golden browns and creams, I decided to take my third rock in a more avant-garde direction.

Lesson No. 3: You don't need as much acrylic paint as you think you do, and swirling reds and yellows around on a rock looks like you were playing with ketchup and mustard.

And upon that lesson, I concluded my rock painting for the evening.

Washburn Rocks began in fall 2018, said Rose, who posts upcoming nights on Facebook. Anyone can show up to become "volunteers for a night."

Initially, Washburn Rocks volunteers bought materials out of pocket, but the Washburn Community Education Foundation donated $300, allowing the supplies to be provided for free. The rocks show up as donations as well.

"Many I think have come from area saunas," Rose said. "Sometimes when I show up at Harbor View, there's a bucket of rocks waiting."

Rose labels the rocks to help finders connect with Washburn Rocks, and then the volunteers — which have numbered anywhere from four to nearly 30 per night — paint them before they are sealed with polyurethane.

Volunteers then hide the stones in public places around Washburn, such as the parks, school forest, walking trails and beaches.

It's exciting for people to hunt for the stones or stumble across them unawares, but the rockpainters may be forgiven for saying the best part of the endeavor is meeting with fellow artists for a fun, meditative and creative evening.

"I think it's just kind of an altogether groovy little space to come to be quiet and chill," Scott said.