Skip to main content
You have permission to edit this article.
Edit
Home
Subscribe
Classifieds
Publications
Weekly Print Ads
Get and Submit
Advertise with Us
About APG Media of WI
Employment Opportunities
1 of 3 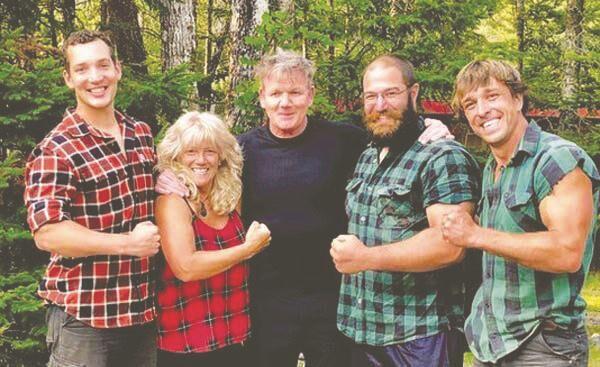 Gordon Ramsay (third from left), world-famous chef and TV personality, appeared in the summer of 2020 at Timber Tina's Great Maine Lumberjack Show in Trenton, Maine to learn how some lumberjack skills. With him in the photo are (from left) Cole Schlenker from New York, owner Tina Scheer formely of Hayward, Mark Bouquin of New York and Thomas Lancaster of Hayward. 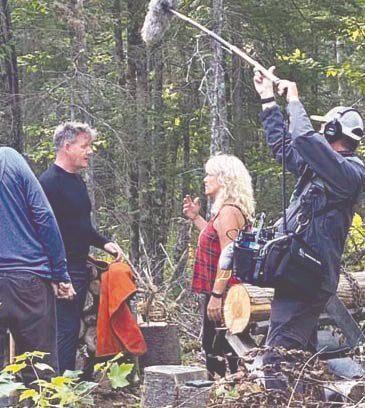 Tina Scheer talks with Gordon Ramsay in 2020 during the shooting an episode of "Gordon Ramsay: Uncharted". The show is called "Maine Ingredient." and will air Sunday, June 13 on the National Geographic channel. 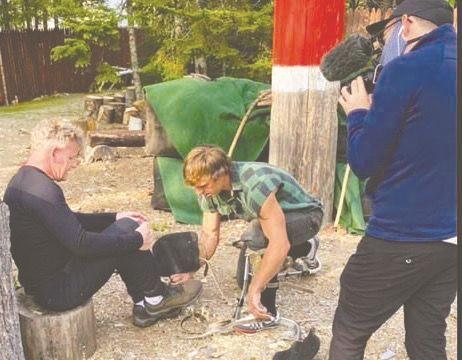 Gordon Ramsay (third from left), world-famous chef and TV personality, appeared in the summer of 2020 at Timber Tina's Great Maine Lumberjack Show in Trenton, Maine to learn how some lumberjack skills. With him in the photo are (from left) Cole Schlenker from New York, owner Tina Scheer formely of Hayward, Mark Bouquin of New York and Thomas Lancaster of Hayward.

Tina Scheer talks with Gordon Ramsay in 2020 during the shooting an episode of "Gordon Ramsay: Uncharted". The show is called "Maine Ingredient." and will air Sunday, June 13 on the National Geographic channel.

Two persons with Hayward roots will be appearing on national television with a world famous chef, restaurateur and TV personality this upcoming Monday, June 13.

Besides being all over cable television, scenes from his shows pop over social media, usually with Ramsay painfully grimacing after sampling an unsatisfying entree and then loudly questioning the head chef skills and inevitably rummaging through the cold storage snorting several obscenities while uncovering slimy chicken parts stored in a plastic container under the remains of last month's special.

From a safe digital distance, Ramsay is fun to watch, but in person he's a possible painful wakeup call to one's ego, but Scheer said she had just the opposite experience.

"I though he was really genuinely nice," she said. "He was very interested in my business and how I got started."

"This area is just like Wisconsin but a mile away you have the Atlantic Ocean," she said.

Scheer's show features all the traditional lumberjack skills, such as crosscut sawing, chopping, log rolling and climbing — just like her brother Fred holds in Hayward by the Lumberjack Bowl, and her other brother, Robert, does from Ketchikan, Alaska.

Last summer, Ramsay was in Maine shooting for an episode for Season 3 when Scheer was contacted.

"He had been out lobstering or clamming with local people and he came to me to get firewood to cook on the beach," she said.

"Uncharted" features Ramsay traveling around the world, soaking a little bit of the local culture while exploring local foods and local dishes. The show is similar to Anthony Bourdain's "No Reservation" and "Parts Unknown," but one big difference is Ramsay prepares his version of local entrees while Bourdain just tasted and opined.

Sheer convinced the cable show that Ramsay should visit her business and learn some lumberjack skills.

"I started showing Gordon how to throw the axe," she said, "and then I told the producer that I'd love to show him how to crosscut saw, and I asked if I could bring in some others to demonstrate."

The producers chose athletic-looking Lancaster, who later convinced Ramsay to put on some climbing gear and try pole climbing.

"I also taught him how to use a hot saw, chain saw, and we raced but he complained I had an advantage with my modified saw," she said.

"He was delightful," she said. "We were working together in the forest and he just thought it was great. He was not at all what he is like on 'Hell's Kitchen.'"

This is not Scheer's first appearance on national television. In 2013 she was in a different Nat Geo series "Ultimate Survival: Alaska" where she had to live in the wilderness with only the items she carried in on her back. In 2006 she appeared in one episode of CBS's "Survivor: Panama."

With their appearance on "Gordon Ramsay: Uncharted," Scheer and Lancaster are the second and third persons with ties to the area who have appeared on a national, cable food-theme show.

Heather Ludzack, owner and chef for the Brick House in Cable, has made four appearances on the Food Network with another famous chef and TV personality Guy Fieri. In 2014 she was on "Diners, Drive-Ins and Dives," and then three subsequent episodes of "Grocery Games," also with Fieri, including one shot last December.

And talk about coincidence, Scheer and Ludzack are also friends and Scheer is a Hayward High School classmate of Ludzack's husband.

"Heather and I are buds," she said.