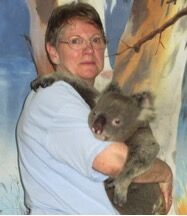 Grace was born on April 7, 1943, in Ladysmith to George and Lettie (Baker) Wilson. She was raised on the Wilson dairy farm along the Chippewa River, northeast of Exeland. Grace attended Windfall Elementary School, Exeland, followed by Bruce High School for two years with her final two years at Ladysmith High School, where she graduated in 1961.

Grace and John first lived in several Twin City suburbs and then spent 29 years raising their family in Rogers, Minnesota. She worked as a bookkeeper and office manager at the local Chevrolet dealerships, Knapp Chevrolet and Miller Chevrolet, for 28 years before retiring.

In 2005 John and Grace built their dream home in the woods outside Spooner, where they spent 15 years enjoying retired life.

Grace and John enjoyed many great trips during their years together, including cruises to Alaska, the Panama Canal, Baltic Sea, and Mediterranean Sea; and vacation trips to Germany, Belgium, Switzerland, Scotland (three times), Australia, New Zealand, and Hawaii (for their 50th wedding anniversary).

In her retirement years, Grace enjoyed traveling, reading, puzzles, games, and spending time with family and friends. She was a founding member and an avid supporter of the Northern Lights Branch of the Clan Cameron Association of North America. Her warm smile and ready cup of hot coffee are fondly recalled by many who attended the Scottish Fair at Macalester College in St. Paul during those cool spring days in May.

Crescent Tide Cremation Services in St. Paul is assisting the family with arrangements. Condolences may be left online at www.crescenttide.com/obituaries-minnesota/. A memorial service will be held at a later date.

In lieu of flowers, those wishing to honor Grace may consider making a donation to either the Minneapolis Heart Institute (www.allinahealth.org/give) or the American Heart Association (www.heart.org).

Do you believe racism is systemic in the United States?