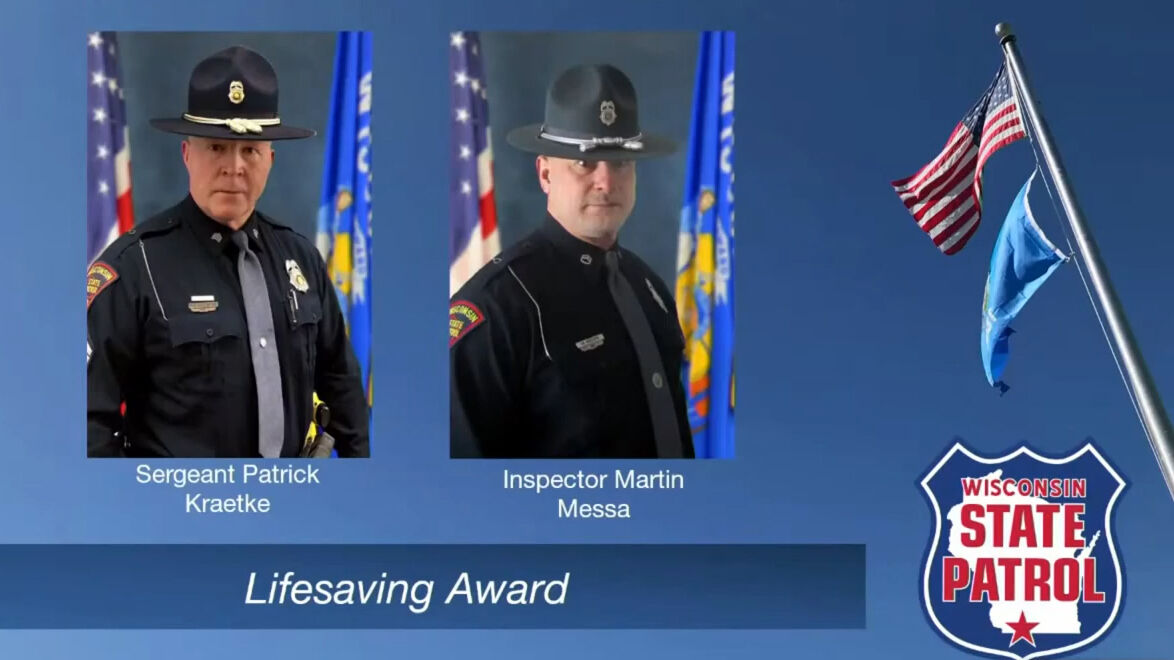 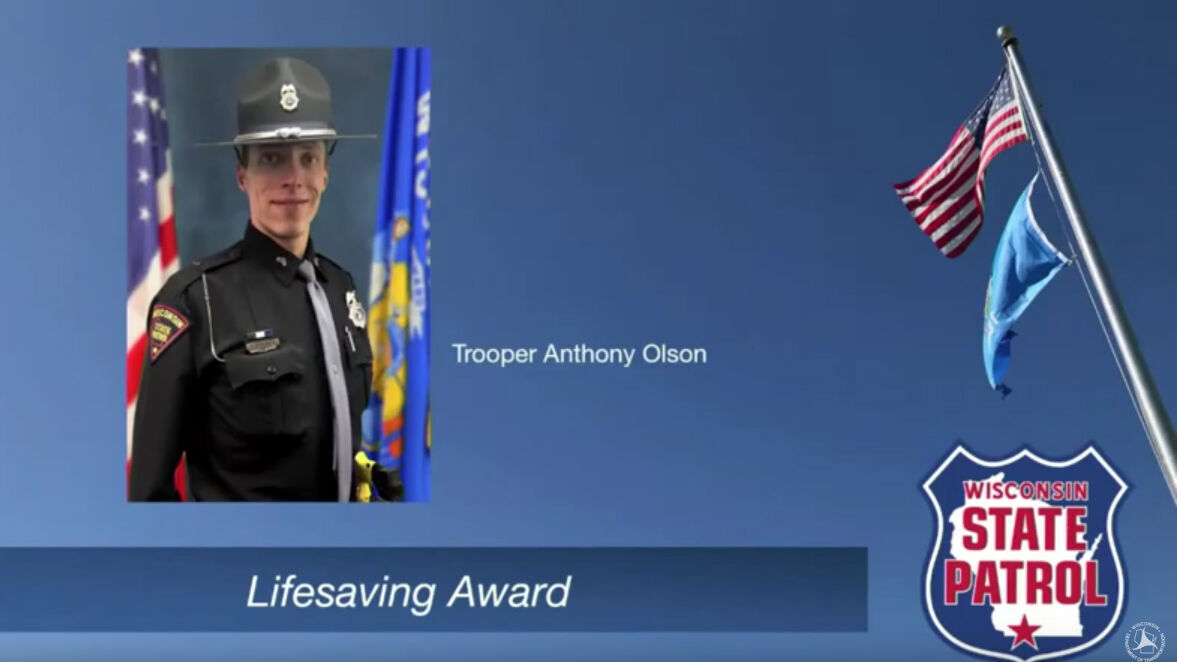 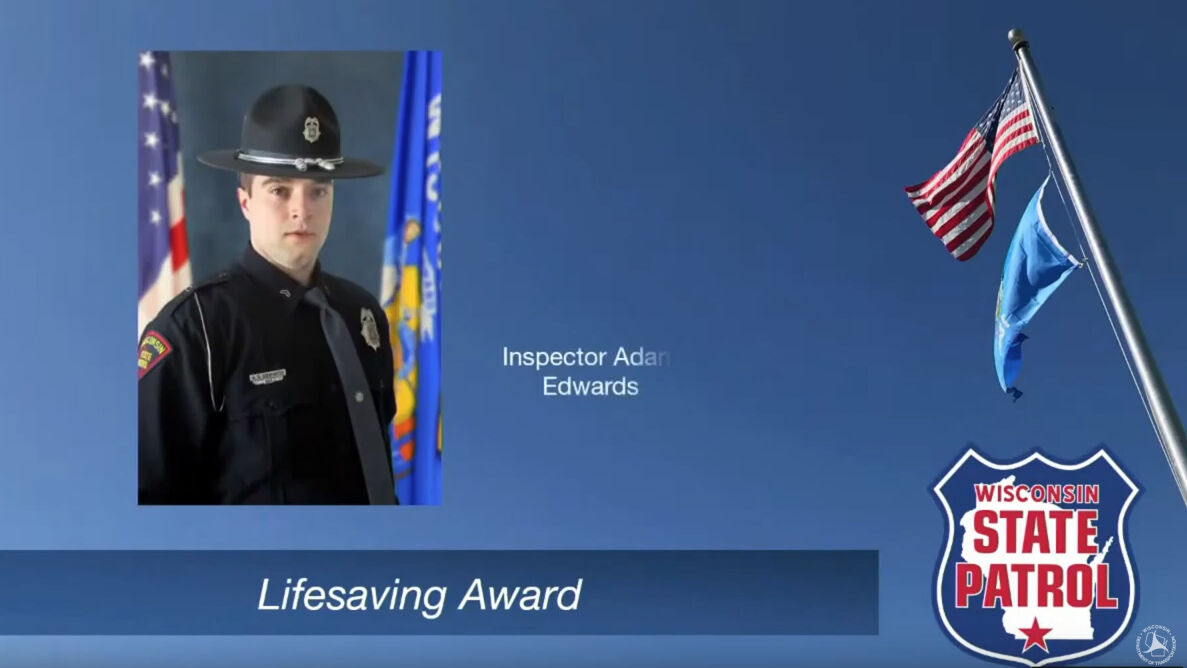 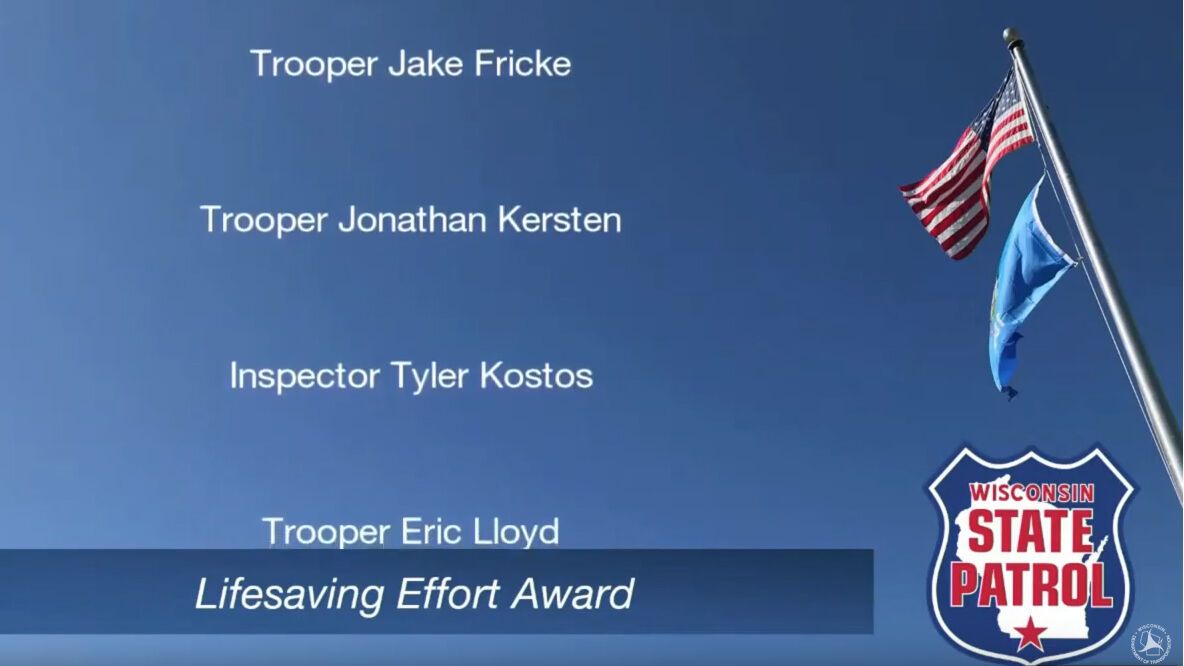 During the annual State Patrol awards ceremony conducted virtually on Thursday, Feb. 18, 77 officers and other patrol employees were honored for their lifesaving efforts and exemplary public service, including three for incidents in Washburn and Burnett counties.

“As we present these honors today,” Gov. Tony Evers said, “we are mindful of the courage and resourcefulness to respond to these situations where you find somebody perhaps on perhaps the worst day of their lives, your willingness and selflessness to face danger in the course of your duties, to serve your fellow Wisconsinites, truly exemplifies the best Wisconsin has to offer.”

“This year, as in no other year of our lives, has underscored just how much we all rely on good public servants, who dedicate their lives to helping people in the toughest emergencies, often times risking their own lives,” Lt. Governor Mandela Barnes said.

“You provide leadership in times of crisis – on duty and off,” said Department of Transportation Secretary-designee Craig Thompson. “Your training, experience and compassion make a difference in the lives of our citizens whether at a vehicle crash, a drug overdose, a mental health emergency or apprehending criminals who threaten public safety.”

Troopers and inspectors from the Spooner post who earned awards include:

Sergeant Patrick Kraetke and Inspector Martin Messa responded to a report of a possible heart attack victim in Washburn County on May 13, 2020. Upon arriving, they found a man lying on his back at the intersection of Larson Road and Townline Road.

They assessed his condition and were unable to locate a pulse. Both officers administered CPR on him for approximately 20 minutes until emergency medical services arrived. An automated external defibrillator was used, and several shocks were administered. His pulse was re-established, and he regained consciousness.

He was transported by MedFlight to the University of Minnesota Hospital in Duluth, where he recovered.

Trooper Anthony Olson responded to a residence in Burnett County for a possible heroin overdose on May 10, 2020. Family members advised that a man was in the bathroom, not breathing, and there were a syringe and possibly heroin in the bathroom sink.

An automated external defibrillator was applied which advised “No Shock,” and the first responders continued CPR until North Memorial emergency medical technicians arrived and took over care. The man was breathing and had a heartbeat prior to being transported to Spooner Health, where he made a full recovery.

While transporting a subject to the Douglas County Jail on May 1, 2020, Inspector Adam Edwards observed that the man under arrest was slouched forward in the back seat of the cruiser. Edwards stopped the cruiser to check on him.

Edwards opened the rear door, again asked if he was OK, and the man began to convulse. Edwards removed him from his cruiser, placed him on the ground, and checked vitals. The man was breathing sporadically.

With the assistance of a Douglas County deputy, the man was placed into a recovery position until emergency medical services and fire personnel arrived and took over care.

The man was taken by ambulance to a hospital where he admitted to hospital staff that he had taken methamphetamine and fentanyl prior to being arrested.

Trooper Jake Fricke was among the troopers and inspectors honored “For performing significant lifesaving measures during the compassionate performance of duty.” The listing of awards did not provide details of individual Livesaving Effort Awards.

The award categories and details on the awards can be found at bit.ly/StatePatrolAwards.

This year’s program can be seen here: