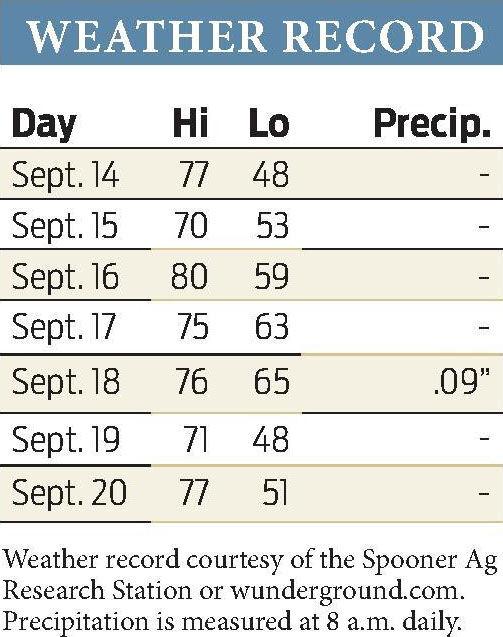 River Street/Highway 63 north of Spooner from the Highway 70 intersection reopened to all traffic Friday, Sept. 16.

The road has been under construction since March, and River Street north of Highway 70 has been closed since then. The Wisconsin Department of Transportation (WisDOT) has been putting in new pavement, storm water and sewer systems, new street lighting and more. During the project, traffic has been rerouted on various detours, with people needing to access the north end of Spooner via side road and cross streets from Highway 70. River Street has been closed from Highway 70 up to the fire station north of town for the past month or so.

The project was originally slated to be done in November, but WisDOT project manager Beth Cunningham said due to good work crews and few disruptions, the project moved quickly and was ahead of schedule, with the finish date moved up to Sept. 30 at that time.

On Friday morning, Christman said street lighting will be in place when the poles are delivered. Due to the supply chain, lights are on back order and temporary posts will be set up. Officers will be monitoring these areas to make sure the roadways are kept safe, Christman said in a Facebook post Friday.

Brenenstall also happens to be the only female player on the team.

The daughter of Jimmy and Kristen Brenenstall, Savannah became interested in football while watching games with her father.

"In sixth grade, I tried football for a year," she said.

However, she had to stop playing, as she didn't have much time to devote to the sport, and she wanted to move up from flag to tackle football.

"I wanted to be stronger ... to gain strength," Savannah said.

When the summer before ninth grade rolled around, Savannah signed up for the team and went to camp. Camp was a bit nerve-wracking, though fun, she said, as she was the only girl. However, she added, "They're very supportive."

This year, Savannah joined the Lakers team as one of three quick guards.

"I mostly play defense because I'm better at it," she said.

The Lakers' first game was Aug. 26, and her mom said she hoped this would be the first of many Friday nights with her daughter.

"We are so proud and happy that Savannah is pursuing one of her favorite sports, despite any fears or reservations she may have had going into the season," said Kristen. "Football is a huge commitment! The Shell Lake football coaches and players have been welcoming and encouraging to her both in practice and in games. It's been so fun to watch her play and see how confident she's becoming on the field and off!"

Savannah said that she loves "the fact that I could tackle somebody." She also likes the fact that an eight-player team means everyone gets time on the field.

"Everybody's important," Savannah said. "There's no way you could hide anybody. Everybody has a role."

The first game was rough, she said, as she was tackled by a much bigger player.

"They knocked me down every time," Savannah said. "It was kind of fun!"

She almost had one tackle at a recent game. "I was close," she said.

The team practices Monday through Friday, and Savannah plays on junior varsity Monday and Friday nights. She does get to practice with the varsity team. The JV players then learn the varsity plays and how to be stronger.

"It helps them learn, but it also helps us learn," Savannah said.

Savannah loves to condition for game nights, working out in the weight room and running to get in shape. She also likes the fact that since "basketball is right after football," she'll be ready for her next sporting season.

Along with sports, Savannah is involved in her school with band and choir and sings in the a cappella group, Tonal Recall.

Savannah loves her position on the team, and she has bigger goals, including becoming captain eventually.

"My goal is to manage to get on the varsity team," she said. "Wouldn't it be cool to be the first girl captain on the football team?"

Savannah hopes to play sports in college, as they are "fun and healthy."

The Lakers will play their Homecoming football game this Friday, Sept. 23.

SHELL LAKE – The City of Shell Lake will be conducting a test of the city water and the lake for PFAS (per- and polyfluoroalkyl substances), as approved by the City Council Monday, Sept. 12.

According to the Environmental Protection Agency, PFAS are long-lasting chemicals and their components break down slowly over time. They can be found in water, air, fish and soil, and exposure to humans and animals can be harmful.

Council President Ken Schultz said that even though PFAS remains in water forever and there is no way of treating it, it is an educational point to know if the city water has PFAS and to continue monitoring it.

The cost for testing would be $2,420, but Public Works Director Mitch Brown said that Jack Harrington was able to secure funding from the Department of Natural Resources so there is no cost to the city. He added that testing could be done immediately.

Brown said that the frequency of future testing would depend on whether or not PFAS was detected the first time around.

Firefighting foam would be the biggest issue, though Brown said it has rarely been used in the city. If this test does not detect PFAS, the city would not have to make plans for future testing.

Schultz said that if the city water and lake are currently free of the chemicals, there is a good chance they won't in the future, either.

The council unanimously approved the testing.

City Administrator Andrew Eiche said ATV/UTVs currently branch off County Highway D onto Old Highway D and reconnect. The city had approved this access because of the nearby trail system.

Now, he said, the Town of Sarona wants Washburn County to open County Highway D all the way to Highway 53 for ATV traffic, so the city needs to consider a recommendation to send to the County Board. He added that if the city denies this request, the county can override it, which he doubted would happen.

Eiche said the Town of Sarona ends at Stone Road, which is the city limit for Shell Lake.

Alderperson Stephen Smith asked if there is less traffic on Old Highway D. Eiche said the ATVs currently have to veer off the main road, but they do cross oncoming traffic. Smith said the mixed speed of traffic, with ATVs' limit 35 mph and regular traffic 55 mph, could be dangerous. He added that ATVs in Dewey Township have no speed limit, and they also have to take into consideration horse and buggy traffic.

County Board Supervisor George Cusick, who represents Sarona, said there is an ATV park along this route, and County Highway D connects two trails. There are many businesses along this route that welcome ATV customers. Cusick said there are signs alerting traffic to horses and buggies.

Schultz said that Police Chief Dave Wilson told the council he didn't see a problem with this opening since many ATV/UTV drivers are already coming from Sarona and most of the City of Shell Lake is open to ATV traffic.

Eiche said statistics show it is safer for ATVs to drive on pavement, since many rollovers occur when they drive in ditches and there is a lot of uneven terrain on the current route.

One citizen commented that Old Highway D is already designated as an ATV route, along with Stone Road.

Schultz moved to recommend opening all of County Highway D through the entire city limits of Shell Lake, and to place signage at entry points on Old Highway D on the existing trail. The motion passed unanimously.

In other action, the council:

• Heard a report from Town & Country Days Chair Tammy Fulton Schultz on this year's festival. Schultz said this was the biggest year ever for the truck pull and car show, and they will need new parking options for both in the future. The committee hopes to bring in new Saturday events next year. Schultz thanked the city crew for their help, and said that if they want to bring back the street dances, they will need more volunteers.

• Got an update from Mayor Sally Peterson on the three city lots up for sale. Peterson said the city is waiting for a written opinion from their attorney before they can move forward.

• Approved a new Community Center agreement to adjust the addendum to reflect no hanging of items on the artwork and pictures inside, and eliminating the wording suggesting the city supplies rags and towels at the center.

• Approved keeping the current lake and ATV campgrounds and boat slip rates the same in 2023.

• Will purchase an AED (automated external defibrillator) and enclosure for the Community Center, with up to $2,500 coming from the center fund.

Events will be held Friday through Sunday, Sept. 23-25. There will be concessions and fun for all ages throughout town, sponsored by the Barronett Civic Club.

Most events take place near or in the Barronett Community Center off Highway 63.

Saturday, a craft fair and farmer's market will be held from 9 a.m. to 3 p.m. The men's slow pitch softball tournament will be held at a time yet to be determined.

The pie and ice cream social sponsored by the Barronett Lutheran Church Women will begin at 10 a.m., followed by the Dairyland Garden Tractor Pull at noon. The "Barronett Brick" Scavenger Hunt also begins at this time, with clues given every hour.

Around 4:30 p.m., a Keg Toss and Barronett Brick Bounce will be held after the softball tournament ends.

Sunday, softball continues at 9 a.m., with a community church service at the same time. A good old-fashioned Sunday dinner with smoked chicken will be held from 11 a.m. to 1:30 p.m.

Registration for the produce and flower contest will begin at noon, with judging at 3 p.m.

At 1 p.m., the Barronett Baker's Battle begins, with judging at 3 p.m.

Sal's on 63 and 20 Mile General Store will sponsor a wine and cheese tasting at 2 p.m., along with kids games and activities held in the community center backyard.

Bare Minimum will perform live music from 3 to 5 p.m.

Hayrides will be given at 3:30 p.m., and a major raffle drawing will finish the day around 5:30 p.m. or following the music and softball tournament.