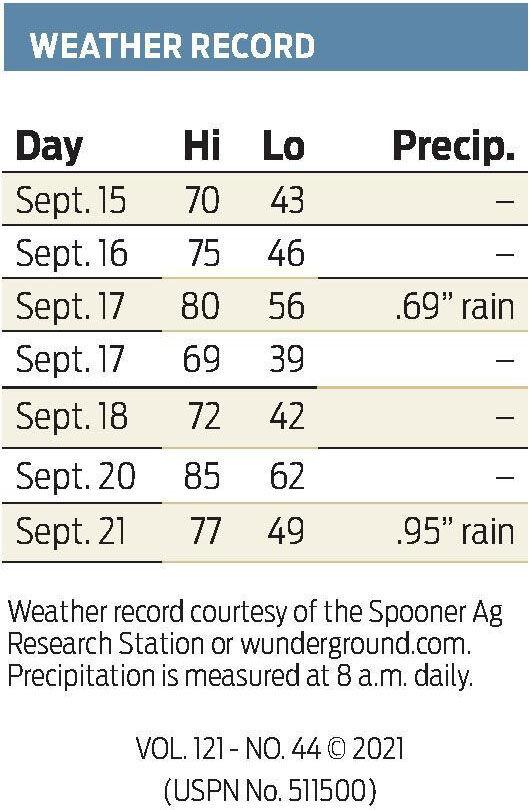 SPOONER – Outbreaks of COVID-19 have "very quickly escalated" at Spooner Area School District, with 22 staff and 34 students sticken as of Monday, Sept. 20, compared to a total of 98 over the entire previous school year.

Students who were "exluded" from attending school because they had COVID-19 or were in close contact with someone who had it was 430 students on Monday – 66% of the elementary students, 29% of the middle school, and 19% of the high school.

For the whole month, 612 students had been excluded from in-person education in the district.

In October 2020, the month with the highest exclusions in the whole school year, 336 students were excluded, district nurse Sarah Hamilton told the board during its monthly meeting on Monday as it considered whether to temporarily order mask wearing at the elementary and middle schools.

That topic was added to the meeting agenda on Friday, after the elementary school closed on Thursday due to the COVID-19 outbreaks. Six people spoke against the mask mandate during public com-

ments, and spirited discussion followed as the board considered whether to impose it to try to stymie the spread.

In the end, the board voted 4-2 to require masks at the two schools until October 6. The vote was 4-2, with Michelle Jepson and Nathaniel Melton voting no.

District nurse Sarah Hamilton reminded the board that the district has a communicable disease plan in place and she must follow related state laws, both as a school employee and a Registered Nurse.

She said confirmed outbreaks in the Spooner schools include:

Elementary School – 32 cases and 228 close contacts. Seven classes have at least two students impacted. One has five positive cases; another has three.

"So we are seeing spread in the classroom of COVID," Hamilton said. "It's very evident."

She said the spread in the high school looks like concentric rings based on the seating charts.

As of Monday, the district was dealing with 56 positive cases in September, 34 of them students and 22 of them staff. Forty-four were active as of Monday. Twenty of the staff cases were over the weekend.

"What we're finding is that if individuals are properly wearing masks, one person will transmit that delta variant to one half other person," Hamilton said. "So you're seeing a negative transmission rate. If no one's wearing a mask it's one to six. We're probably seeing a one to six right now."

According to the county health department, if all of the students are wearing masks and maintain at least 3 feet of social distance, the students would not have to be quarantined if they have not had physical contact with someone who has COVID-19, Hamilton said. High school students would continue to be excluded if they are within 6 feet of a positive case.

Even with those conditions met, nearly half of the students currently would be excluded for numerous reasons, such as because they are sick, are waiting to be tested, their family has declined testing, or they were in close contact with their COVID-positive teacher.

All three principals said their schools are experiencing positive cases. They said filling in with on-staff teachers when a teacher is out is difficult but being done since not enough substitutes are available – or willing to be available at this time.

"I actually spoke to all students today, we just reminded them that we do want to keep the building open, we want to be face to face," said high school principal Dennis Scherz. "So we'll try everything we can to keep you in the building. The good news is I really believe they all want to be there. That's a change from a few years ago. They really appreciate being at school."

He noted that mask wearing is voluntary and that more and more high schoolers are wearing them.

Scherz said that for the next school day, 22 teachers would be out and only three substitutes were available.

The staff are doing the best they can to reach out to those students that are quarantined, he added. The quarantining has happened so fast that students in the lower grades have not even had the chance to learn how to use the electronic devices that they can employ at home.

District Administrator Dave Aslyn said the district does not have many options. The district has to take its direction from the county health department. Procedures in other counties might be different, he said.

"We're going to continue to focus on providing face to face learning opportunities to the best of our abilities," he said. "And again, that's based on a great deal of feedback that we've received. It's based on the learning that took place for us as a district last year, knowing that remote learning whether it's remote only, or even having to be remote one day a week, is not the best long-term solution for students.

"The ability for students to interact with their peers and interact with adults in schools is critical to their well-being," he said. "And we are focusing right now on having adequate staff to continue face-to-face operations in the Spooner schools."

Nobody wants to wear masks, he said, but it is the best option to keep schools open.

Melton said requiring masks for all students is a "dangerous precedent" and the choice should be in the parents' hands. Instead, the school should strongly encourage it, he said.

The children are not being hospitalized or dying, he said, adding, "some of them hardly get sick."

Board member Paul Johnson said the district is balancing a risk, and this one is serious and killing a lot of people.

"The only thing we can do is try to take the precautions and keep everybody safe," he said.

This article continues on spooneradvocate.com.

SHELL LAKE – Jeffery Colegrove, 37, of Spooner has been sent to prison for possessing child pornography.

He had been charged with 10 counts of possessing the pornographic images following an investigation by Wisconsin Department of Criminal Investigation (DCI). Eight were dismissed but read into the record as part of a plea agreement for being sentenced on two of the counts.

Washburn County Circuit Judge Angeline Winton sentenced Colegrove on September 15 to three years in prison and three years of extended supervision on each of the two counts, to be served concurrently. He will be required to be on the sex offender registry for 15 years, practice absolute sobriety, have no contact with minors, and not use the internet unless approved by his parole agent.

Colegrove did not make any comments during his sentencing.

In 2019 the National Center for Missing and Exploited Children had received a cybertip from the website Tumblr regarding images containing suspected child pornography. That led to an investigation by the DCI which revealed that Colegrove's email address was tied to the Tumblr user account connected to the suspected images.

DCI special agents conducted a forensic examination which confirmed that the images were sexually explicit images of children under the age of 18.

A search warrant was obtained for Colegrove's Spooner residence and executed on October 17, 2019. During the search, law enforcement retrieved electronic devices belonging to Colegrove which were ultimately found to contain additional images of child pornography.

During an investigative interview, Colegrove admitted to using websites such as Tumblr, Twitter, and Pinterest to locate images of child pornography when he used methamphetamine, according to the criminal complaint. Colegrove also said that he would save the im-

When he was questioned by law enforcement, Colegrove denied any sexual contact with any children, saying he is not sexually attracted to children and does not know why he looked at child pornography.