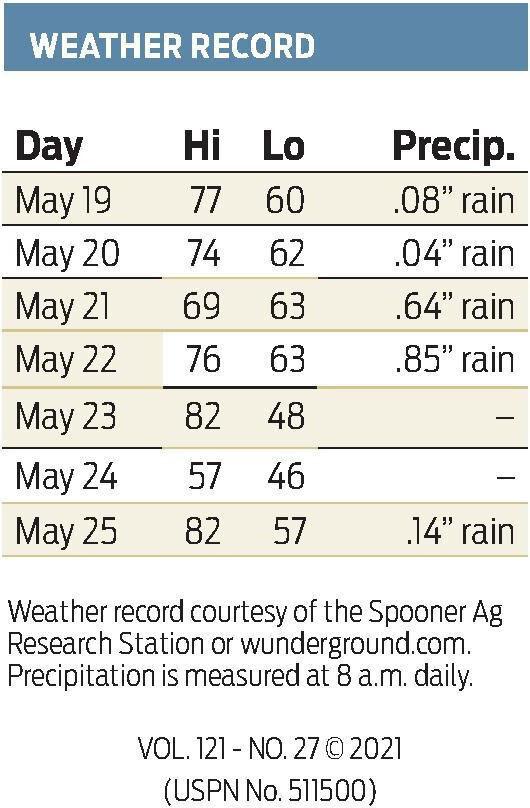 MINONG– Two ATVers are in the hospital after what started as an ATV excursion turned into a crash with lifethreatening injuries.

Alex Ostrowski and her passenger, Nathan Runions, were ATVing on Friday afternoon, May 21, and were on Becherer Drive, which was very wet from very recent rain, when they came up to the intersection with Smith Bridge Road. According to a fellow ATVer who saw the accident, the ATV's brakes locked up at the intersection and the ATV slid sideways before rolling 1 1/2 times and landing on top of Ostrowski and Runions.

They were unconscious and bleeding from head injuries when officers from the Washburn County Sheriff's Department, Minong Police Department, and Department of Natural Resources and emergency medical technicians from Minong Ambulance arrived.

Ostrowski and Runions were taken to Minong Airport, and Runions was helicoptered to Duluth for medical care, and Ostrowski was taken to Spooner Health and then flown to the Twin Cities.

They were not wearing helmets at the time of the accident, according to the Department of Natural Resources.

GoFundMe.com pages have been set up for both of them to help the defray the medical expenses for their critical injuries.

Ostrowski is described on her page as a "beautiful soul." The page said she had brain bleeding and swelling, but the extent of any brain damage

will not be known until she is brought out of her medically induced coma. She has undergone some surgery already and has a "very long road of recovery ahead."

"Please say a prayer, give positive vibes, and cross fingers that Alex will pull through this. She is a very strong willed, determined woman," said Elissa Lisenby, who organized the page.

Runions suffered multiple skull fractures and broken ribs, and Go-FundMe page said he has gone through a long and complex surgery to his skull.

"He remains on life support and is fighting for his life," said the page organizers, Hannah Elizabeth and Jelena Runions. "He is still in very critical condition and we are asking for some help to cover medical expenses as the future is unpredictable at this point."

They said that "Nature Nate" is "is a loving and protective son, a brother most wished they had, the best uncle to his two nieces and nephew that mean the world to him, amazing guitarist, hard worker, a philosophical genius, a driftless gypsy just waiting for his next adventure, the walking history encyclopedia who will demolish you in any political debate."

They said that he "is the easiest target for any comical roast with a soul that takes it like he is auditioning for Comedy Central. Nathan is strong willed and stubborn as a bull."

They said they are praying for Runions and Ostrowski, and they ask others to pray for them also.

An outdoor adventure at Hunt Hill Audubon Sanctuary in Sarona awaited Spooner Middle School fifth graders as they enjoyed their annual field trip on May 20-21. Here, Brenna Dietrich (back) and Jacla Maubry glide across the surface of the water in a canoe. More is in Sports/Outdoors this week.

Economics
Heritage Area could be an economic boost

The numbers are in.

"We have believed firmly since the beginning, which was about 2008, that there are economic benefits," said North Woods and Waters Chair Marty Harding. "But we were not sure what the actual implications of national designation might be for our region."

Results of a four-month economic impact study on the region were released this month. To gather the projections, North Woods and Waters partnered with the University of Minnesota's Carlson School of Management. The work of five students — Vincent Shaw, Brendan Laliberte, Claire Caschetta, Wen Chai, and Hudson Brama — and their director, Dave MacCallum, was supported by the McKnight Foundation. The numbers are more rel-

evant now than ever, as locals decide whether to get behind the designation effort. Earlier this year, NWW received notice that its proposal for NHA designation is eligible for consideration by Congress. But without vocal support from people living in the proposed heritage area, the bill might never get off the ground.

Based on case studies of 25 existing National Heritage Areas and statistics on current visitor spending in the St. Croix Watershed, the proposed North Woods and Waters NHA would see the following:

The group's projections showed that visitor numbers would increase slowly in the first two years, then pick up speed, increasing from the current 640,000 to about 700,000 after five years, and 1.9 million after 10 years.

Visitors would mostly spend on food, lodging, transportation, recreation, and retail. But the benefits would not be limited to those industries.

"Tourism economies are truly complex webs of interacting consumers and producers," said Wen Chai, "so the purchasing decision of a food or service by a visitor can generate a ripple effect throughout an economy like [the St. Croix Watershed]."

Dollars spent at a local cafe, for instance, might then be used by the restaurant to purchase meat or vegetables from a nearby farm. Meanwhile, staff at the same thriving cafe would spend their earnings at local and regional businesses.

Visitor spending would also take a little pressure off the tax base, as area governments would see greater income from sales tax, noted Claire Caschetta. By the five-year mark, municipal governments in the watershed would see, collectively, $1.2 million more per year than if designation had not happened.

"Broadly, the money brought into the community by visitors leads to third and fourth order effects beyond the initial increase in tourism revenue," said Brendan Laliberte. "This is captured by real GDP increases and community-wide increases in disposable income. And as businesses are more profitable, new startups may form, attracting external monetary injections into the community beyond NHA designation. ... All of this should equate to an increase in quality of life for the community members within the St. Croix Watershed."

Once designation occurs, a management plan is developed, which in turn enables benefits to start. National Heritage Area designation would also qualify local initiatives for a portion of $150,000 to $330,000 in federal grant money to be awarded to the heritage area annually.

NHAs get involved in recreation, education, conservation, interpretation, preservation, and economic development. All projects done under the auspices of the NHA would be communitydriven. And according to Shaw, local people would lead and benefit from these efforts.

"Grants fund projects," he said, "which attract people and businesses that really amplify the resources that are already present in a region. ... Many NHAs allow private businesses to help tell the region's stories, and receive help to be able to do that. Other things, like tourist groups, bring visitors to the sites and offer an in-creased revenue stream for local businesses.

"Designation is going to bring greater credibility to the region as a whole," Shaw said. "It acts as a brand image for the region, and it's going to help people make that decision to visit."

The proposed National Heritage Area is comprised of 18 counties in Minnesota and Wisconsin, each made up of many towns with their own history to share, and distinct experiences to offer visitors, noted Hudson Brama. Because heritage areas take existing attractions and programs in the region and get people involved in a way that ties to the larger regional story, they can unify communities through shared cultural roots.

"Through collaboration of their strengths, a powerful experience can be created for visitors," Brama said. "In essence, what [collaborative marketing as an NHA] does is takes all those individual efforts of communities and pulls them all in the same direction so recognition and credibility can be built."

"The infrastructure is already there," said Chris Stein, National Park Service program coordinator for NHAs of the Midwest, who was quoted in the student group's presentation. "This will market the entire package instead of individual parts."

To find out more about the economic impact study or what happens after designation, northwoodsandwaters.org.

Abigail Hessil serves up a steaming cup of one of the many flavored coffees she offers at the brand new Spooner business Redemption Coffeehouse & Roastery. Located just north of Spooner at her grandfather Richard Melton's Poor Richard's Antiques, Hesseil's coffee shop will be opening for Memorial Day Weekend.

It has been a whirlwind period for new Spooner business owner business owner Abigail Hessil – graduating, getting married young, moving back home, and realizing a dream when she opened Redemption Coffeehouse & Roastery.

SPOONER– Abigail Hessil has been working in the coffee business for seven years. She is now gearing up to go out on her own as the owner of Redemption Coffeehouse & Roastery in Spooner.

The business launches just in time for the busy Memorial Day Weekend.

The building is a refurbished shipping container with the inside made specifically for a coffee shop.

it. We used a crane.

"We've done quite a bit of renovation," said Hessil. "We put in a new floor, a roaster, a cabinet. This was a fully functioning Starbucks for three years.

Hessil roasts all of her own coffee to offer unique flavor.

And Redemption Coffeehouse & Roastery is not a single building.

For those who would like to order their coffee and relax outside on site, there is also rooftop seating. For customers more comfortable sitting inside, there is a new indoors shed for seating.

When Hessil was looking for a location to begin the new business, Poor Richard's Antiques jumped out as a natural place to set up shop.

"Poor Richard's Antiques has been in Spooner for so long, it is well known," she said. "I have so many memories here growing up.

"I used to sell lemonade here. I used to get semi-trucks to honk as they passed by. My handprints as a child are in the cement!

"It's so cool to be able to partner with Grandpa."

Hessil is the daughter of Andrew and Kate Melton. A 2017 graduate of Spooner High School, she was married in 2019 to Jackson Hessil from Tomah, who she met at college.

When COVID-19 hit, the newly married couple decided to move back to Hessil's Spooner hometown.

The name of the business, Redemption Coffeehouse & Roastery, reflects Hessil and her family's deep Christian faith.

"Redemption Coffee & Roastery ... I just felt like the Lord gave me that name," she said. "I wrote it down on a napkin. The fact that we are opening is testimony to God working.

"This is so cool. I want this to be a place where people can feel like they fit in.

"I worked at Alley Cats in Spooner with Robert and Michelle Ortman," Hessil said. "They loved the business, they loved the people. I want that here. I want this to be a place where anybody can come and say they fit here and feel comfortable.

"We'll have eight different flavors of ice cream from West's Dairy," Hessil said. "I'll be roasting my own coffee – that makes me a little different. I'll have a lot more control of my product."

Redemption Coffee's "soft opening" was Tuesday and Wednesday this week, with the Grand Opening on Thursday, May 27.

"We'll be open Memorial Day Weekend," said Hessil excitedly. "Hopefully all goes well. I'll be walking in faith. This will be whatever God wants it to be. And I love doing it."