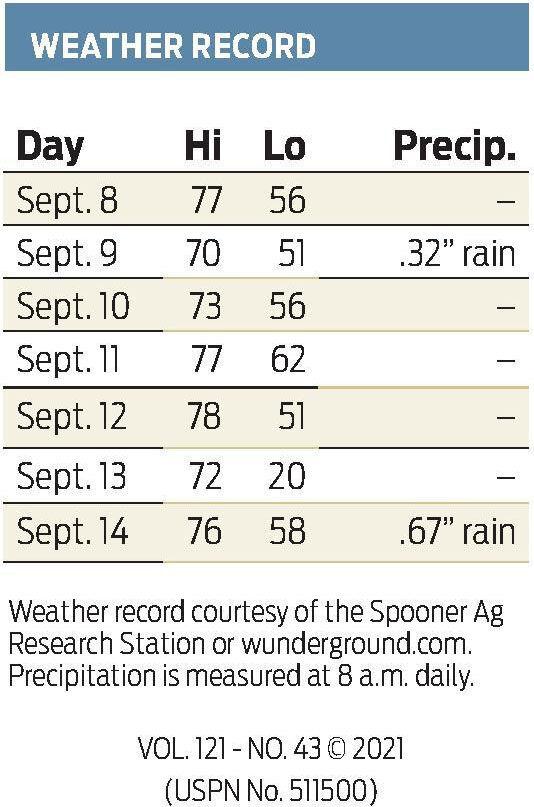 Gathering outside the Spooner Railroad Roundhouse during a break on Saturday, Sept. 11, members of the Army National Guard Recruit Sustainment Program (RSP) line up for a group photo. Organized by Staff Sgt. David Bailey, Spooner, the group spent the day cleaning the historic Roundhouse in remembrance of 9/11 and the terrorist attacks of 20 years ago. Staff Sgt. Bailey and his young troops were welcomed by Terri Reiter (backrow, far right), the chairman of the Railroad Park Board and treasurer of Friends of Railroad Park (FORRP). They were later treated to a cookout.

Medicine
'As contagious as chickenpox'

WASHBURN COUNTY– The trajectory of positive COVID-19 cases in Washburn County does not look promising.

Monday's weekly update from the Washburn County Health Department showed the county had 53 new cases over the past week – and that number was incomplete since the state's disease tracking system had an outage over the weekend, delaying positive case reports.

In the prior week, which included the Labor Day Weekend, the county experienced 41 new cases and one death. Nineteen cases occurred in the last week of August. That was a dip compared to the announcement on August 23 that the county had 31 new cases in the previous seven days – just one fewer than the county had in all of June and July.

"We are definitely seeing an increase in cases," said Washburn County Public Health Director Cheri Nickell. "Delta is as contagious as chickenpox, which is pretty darn contagious!

"Cases of COVID-19 are continuing to rise as the more contagious Delta variant now makes up over 99% of COVID cases nationwide," the health department said early in September.

As of Monday, the county has had 1,777 positive cases (67 of them currently active cases)

and 25 deaths due to COVID-19 or its complications.

The increasing number of cases has the county health department recruiting a limited term communicable disease surveillance nurse who would monitor and investigate suspected cases, and who would do the contact tracing through December 31.

The number of vaccinated county residents is creeping up by increments, now standing at 57% who have had at least one dose, or 8,964 people. That is a slight increase over last week's number, 56.5%. The county stands at 54.4% fully vaccinated.

IT MUST BE YOUNG LOVE!
BILL THORNLEY

Early September in wild Northwestern Wisconsin is a time of colors ... brilliant colors, multiple colors, beautiful colors. In the Spooner area, while most would think of early autumn colors of reds, oranges, yellows, one of the most magical colors is white. A young albino whitetail doe that has become something of a beloved part of the landscape, suddenly seems to have found a boyfriend. As the annual rut begins, the new and seemingly happy couple was spotted nuzzling recently. Young love, Mother Nature style!

SPOONER– The project to demolish the old postal building at 422 Front St. and convert the property into a park could begin as soon as next week.

At the September 7 monthly Spooner City Council meeting, City Administrator Bill Marx announced that he had received an email informing that the city had been approved for a Wisconsin Economic Development Corporation (WEDC) grant previously applied for and on which the commencement of the project had been pending, although the city had not yet received the actual agreement specifying the amount.

Marx said on Monday, Sept. 13, that the grant agreement, which he had since received, awards a match to what the city spends, up to $119,000. Marx said that the remediation consisting of removal of lead and asbestos found in the window calking and floor tile adhesive, estimated at $23,485, must happen first and indicated that the contractor Alpha Omega Environmental is expected to begin sometime within the next two weeks.

Next will be the demolition Marx estimates at $82,000. He said he hopes for the project to be completed this fall into December, but it possibly could extend into next May due to how busy contractors currently are. He said the city will advertise for bids, and opening is planned for October 21.

During the public commentary portion of the meeting, two residents voiced concern over the lack of plans for a sidewalk by McDonald's from Front Street to Hwy. 63 along Maple Street/Hwy. 70.

One speaker added that others she had spoken to felt the same way about a need for a sidewalk where now there is none on either side the length of that block.

In the April monthly meeting, council in a 7-1 vote approved the site plans submitted by McDonald's to purchase the adjacent building, which housed a laundromat and business space, to demolish it and facilitate construction of a second drive-through.

The lone no-vote had come from Alderperson Carol Dunn, which she explained at the time was due to the fact that their plans did not include a sidewalk.

Marx said that the Department of Transportation (DOT) had informed him recently that adding the sidewalk into the River Street Project, which will begin in the spring at this point, would be very difficult since that project's plans are now 100% complete and will be advertised for bids in five weeks.

City Attorney Jeff Kohler recommended appealing to McDonald's, and on Monday Marx said he had spoken to a McDonald's representative who said he will take the matter to the corporation.

Council discussed the probable redistricting of the four city wards due to the expected reformation of boundaries of the Washburn County supervisory districts from which the county board is elected, resulting from the 2020 census. It is designed to keep a more even number of people in each district, or level the playing field, as Mayor Gary Cuskey described it.

However, it was also brought up that changing the city ward boundaries could result in a possible event where an alderperson may end up residing in a different ward than they presently represent. They would stay in the present office until their term expires should that happen.

A creation of two more wards was another possibility mentioned. The city must receive the county's new boundaries, which is believed to be by October 16, before redistricting of wards can occur. City Clerk Patricia Parker also related later that the 2020 census estimated the total population of the city of Spooner in January to be 2,561, which is down 121 residents from the 2010 census.

Alderperson and library liason Chuck Gagnon reported that the Spooner Memorial Library Board approved a bid of $14,000 by SEH, an engineering/consulting firm from Rice Lake, to do a feasibility study to determine the library's needs and the best solutions for the future, with the main concern being space. One main question the study will help answer is whether to build on to the present building or relocate to add space.

• Council approved proceeding with an electric rate case application with River Street lighting (with grant funds applied), a new bucket truck ($275,000), wage increases, and $1.2 million High Speed Protection for sub-stations included. The Public Service Commission (PSC), which regulates the utility, will complete a study and assessment to determine new rates on the utility, which Marx said haven't increased since 2011.

He said the current bucket truck is more than 10 years old, and wage increases will be more compatible with other utilities in the area. He said that High Speed Protection is required and acts like circuit breakers rather than fuses and explained how squirrels, for example, contacting the fuses in the existing system can cause a tremendous amount of damage and expense to other utility equipment as well as the customer's and can shut a substation down for weeks.

He said he doesn't expect the improvement to add much to rates since it's replacing old with new. A public hearing will be held before any rate increases are approved, which isn't expected to happen for another four to eight months.

• Council approved a 6% customer increase in garbage rates, which amounts to a monthly increase for a 35-gallon can from $16.78 to $17.81. Marx said the cost of the cleanups are getting expensive, being up 18%.

• Dunn reported that the Business Improvement District (BID) has been working on a plan for advertising and directing people to the downtown during the River Street Project scheduled to begin next spring.

She explained that directions with signs will be challenging since there will be five phases to the project working up its way up River Street, which may require different directions and therefore the signs to be changed as the phases and location of the project change.

• The K-9 project was referred to Finance Committee for further discussion and more information on funding and grant options and what the actual cost will be to the city.