A 34-year-old Haugen man was convicted by a Barron County jury on Friday, Jan. 10, of killing his 3-month-old daughter in July 2017.

The jury deliberated nearly four hours before convicting Curtis A. Strand of second-degree reckless homicide and resisting or obstructing an officer.

The Barron County Sheriff's Department responded to a call at Strand's home on July 9, 2017, for a 3-month-old child who was not breathing. The child was flown to Marshfield Medical Center where she died two days later.

The baby "suffered a large fracture to the left side of her skull and as a result of that there was an injury to the brain," which caused her death, according to Barron County Court records. Doctors advised police that "it was highly unlikely this type of injury occurred a long time ago and had gone unnoticed."

Dr. A. Quinn Strobel from the Midwest Medical Examiner's Office in Ramsey, Minn., examined Strand-Dostal's autopsy and concluded "the manner of death was a homicide and the cause of death was anoxic encephalopathy due to blunt force head injury."

"I suspect the jury gave him the benefit of the doubt of that," O'Boyle said.

Strand was the only person with the girl when authorities arrived at the home. Strand told authorities that the infant

had fallen off his knee to the floor. But doctors doubted his story, the criminal complaint states.

Strobel said "that the degree of skull fracture required more velocity and acceleration because the degree of fracture that Haeven suffered and the resulting damage to the brain."

Strand later admitted that Strand-Dostal fell off a counter area in the kitchen and struck her head on a hardwood floor.

Strand told police he had a 50/50 custody arrangement with the girl's mother, but it was an informal agreement.

O'Boyle said he stressed to the jury that Strand didn't immediately tell police his story that the child fell, and that medical experts testified that Haeven's injuries didn't match a fall from that distance.

"He's really the sole person who could have caused the significant skull fracture and the severe brain injury," O'Boyle said. "He said, 'I didn't know how it happened.' There was no disclosure (to law enforcement) of any drop that led to the injury."

O'Boyle said the medical experts testified that a drop didn't explain the severity of her damages.

A pre-sentence investigation was ordered, so the sentencing will likely be in late March or early April. O'Boyle said he wants to review that investigation's findings be fore recommending the length of a prison sentence.

"You obviously have the death of a child, which is a paramount factor in the PSI; it's pretty aggravating," O'Boyle said.

Crowned as Royalty for the Spooner High School 2020 Winterfest on Friday, Jan. 10, were Queen Grace Olson and King Riley West. See more on Winterfest this week in Sports/Outdoors. 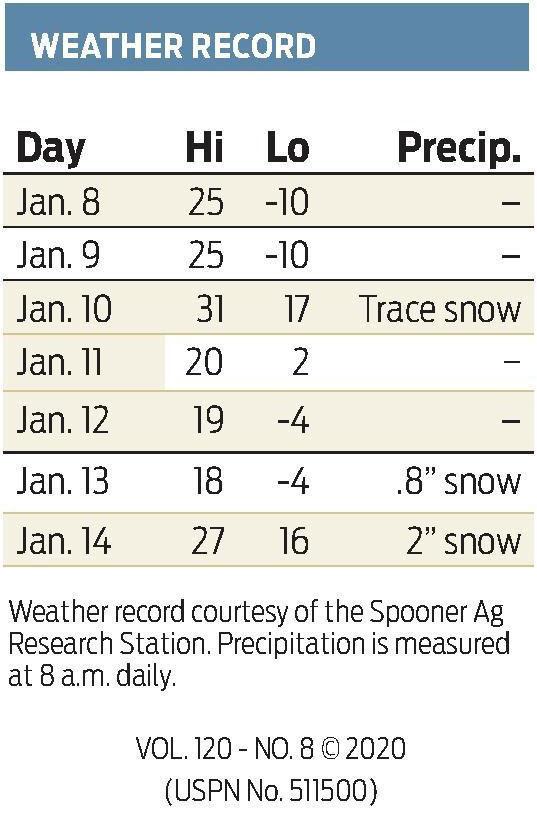 BIRCHWOOD– Birchwood School will put a referendum before voters on April 7 that, if approved, would give the district a five-year, $5.8 million non-recurring referendum for maintenance and operations, technology, and curricular needs for students.

Several informational sessions have been set up to introduce the referendum and answer question. The first was on Tuesday, Jan. 14. Upcoming sessions will be on:

• Monday, March 16, at 2 p.m. Cookies and conversation in the middle school math room.

"A vast amount of time this summer involved analyzing the physical structure of each building and studying student programming capabilities within the district," said Superintendent Diane Johnson. "With decreases in financial support for many school districts over many years, including Birchwood, projects and programming have been delayed and need to be addressed.

"Some of the challenges include repairing the Bobcat building, improving drainage along the south side of building, repairing and/or replacing sidewalks, repairing and replacing roof sections as needed, maintaining students' access to technology, and updating STEAM (Science, Technology, Engineering, Art, and Math) areas, to name a few items."

The timing of the referendum will help keep the tax increase low: The current building debt (for energy-related improvements) is set to be paid off in 2020-21.

"Our goal is to keep school taxes as level as possible, with the understanding that many people who live in this community are on fixed incomes," Johnson said.

wood residents, parents, and staff via email and mail this fall to gauge their reaction to what was then a potential referendum. Almost a quarter – 407, or 24% – of the surveys were returned.

Of those responses, three-quarters would definitely or probably support support the referendum, at the stated tax level, for maintenance, technology access, and maintaining programs and services.

"The survey also indicated about 50% of respondents have an interest in the district exploring the idea of a library/meeting area available for school and community use," Johnson said. "Finally, survey results showed that people believe it is important or somewhat important for the school to explore expanding Fab Lab opportunities and partnerships with WITC."

Johnson said that the district has been planning for a potential referendum for three yearsand waited until the debt was paid before asking for support.

"Staff members are very aware that many people in this community live on a fixed income and costs need to be kept as low as possible," the superintendent said.

One of the comments written on a returned survey was the referendum should invest in "areas of children and families rather than in existing assets."

"We completely understand that the school and its resources need to center around children and families," Johnson said. "The challenging part is the children need to have roofs that do not leak, locker room floors that are not bulging due to water entering the building, or trips in an unreliable van with 230,000 miles on it. If our current budget allowed for us to properly maintain the building, we would certainly do that.

"The district is zeroaided with consistently declining revenue [from the state], meaning, finances are tight. Over the years, the Building and Grounds Committee has made numerous decisions on projects/items that must be replaced in that year (like landscaping the west side so water would not run into the gym again) and items that could go on the five-year plan. Not unlike making choices in your personal spending, district personnel make decisions on how to be the best steward of taxpayer dollars."

A survey respondent suggested the district merge with Shell Lake or Rice Lake.

Though an option, Johnson said that a merger would mean Birchwood taxpayers would pay the tax rate of the school that the district merges with. If Rice Lake, then Birchwood's mill rate would rise from 6.34, the 12th lowest in the state, to 10.4, a 71% hike. If Shell Lake, the increase would be 60% with a mill rate of 10.13.

In response to a survey respondent saying parents and grandparents will be "looking for value, academic excellence and public/private partnerships to support the district," the district recently earned four out of five stars on the State Report Card, representing "exceeds expectations," which put it fifth out of 15 districts in the area.

"Our little school district continues to grow and flourish, even with many financial challenges, because we have supportive businesses, community members, and groups, like the Educational Foundation of Birchwood that provides support to both students and staff members," Johnson said. "The district would like to increase partnerships and are always searching for ways to have students working in the community with mentorships and job shadowing, especially in the technical fields. Those with businesses are certainly welcome to contact the school to see how we can work together to support students.

"Birchwood is very unique in its offerings of outdoor educational opportunities to all students in the district. Through our partnerships with Washburn County, S.C.O.P.E., Exeland Rod and Gun Club, American Transmission Company, and Futurewood, students participate in educational experiences such as dog sledding, skiing, fishing, canoeing, tree identification, and habitat identification, to name a few. Again, we are lucky to have supportive partners working hand-in-hand with the school district!"

City hopes to get grants for construction
BY SHAUN ANDERSON
01.15.20

The project includes new curb and gutter, sidewalks, water mains, sewer laterals, storm sewer and sewer lining, and manholes in addition to resurfacing the street. As explained previously by City Administrator Bill Marx, the project is planned to be completed to River Street in 2022, skipping next year when River Street is scheduled for reconstruction.

Marx explained during the meeting that the city currently lacks adequate funds to complete this year's phase of the project and is applying for several state grants to help cover the cost estimated at $450,000.

The three grants applied for are through the Wisconsin Department of Transportation and include a one-time MLS (Multimodal Local Supplement) program at 90 percent funding, the MSIP (Municipal Street Improvement Program) at 50 percent funding which City Clerk Patricia Parker said the DOT decides approval of; and a third grant called the MSID (Municipal Street Improvement Discretionary) which amounts to $17,330 and which the city receives every four years and will automatically get.

Marx said a public hearing is tentatively planned for March after the that month's general council meeting and after hopefully finding out funding approval.

tional cost to the city such for the fall and Spring cleanup days and additional paperwork.

• Council approved $8,900 from budget for a new emergency siren and $5,395 to come from contingency funds for its installation. The siren, one of four, is located across the alley from city hall and it is old and the winding in the motor is bad, making it hard to run. It often blows breakers, rendering it inoperable.

• Council approved proposal from Indianhead Rifle and Pistol Club (IRPC) which Parker explained later is to develop a new walkthrough archery range in 2020.