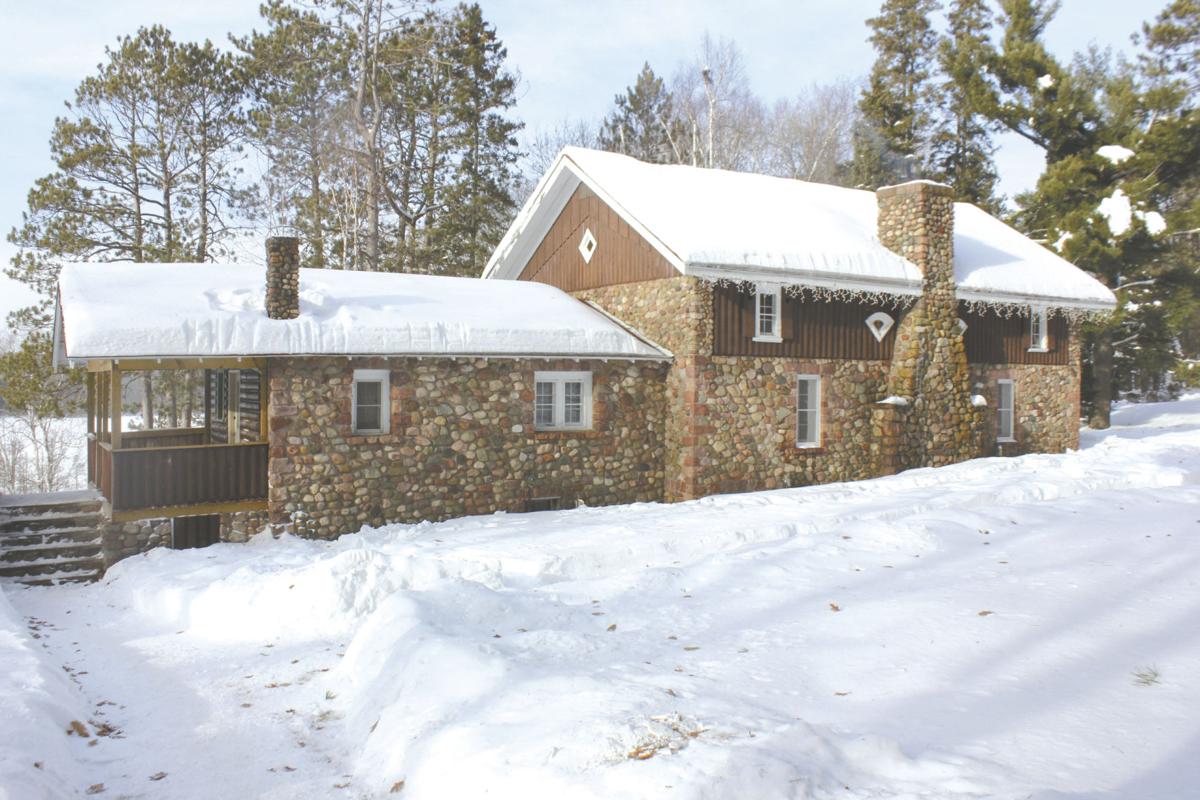 The Hideout, the former lodge of the infamous Prohibition gangster Al Capone, has stone walls that reflect the region's geological history. 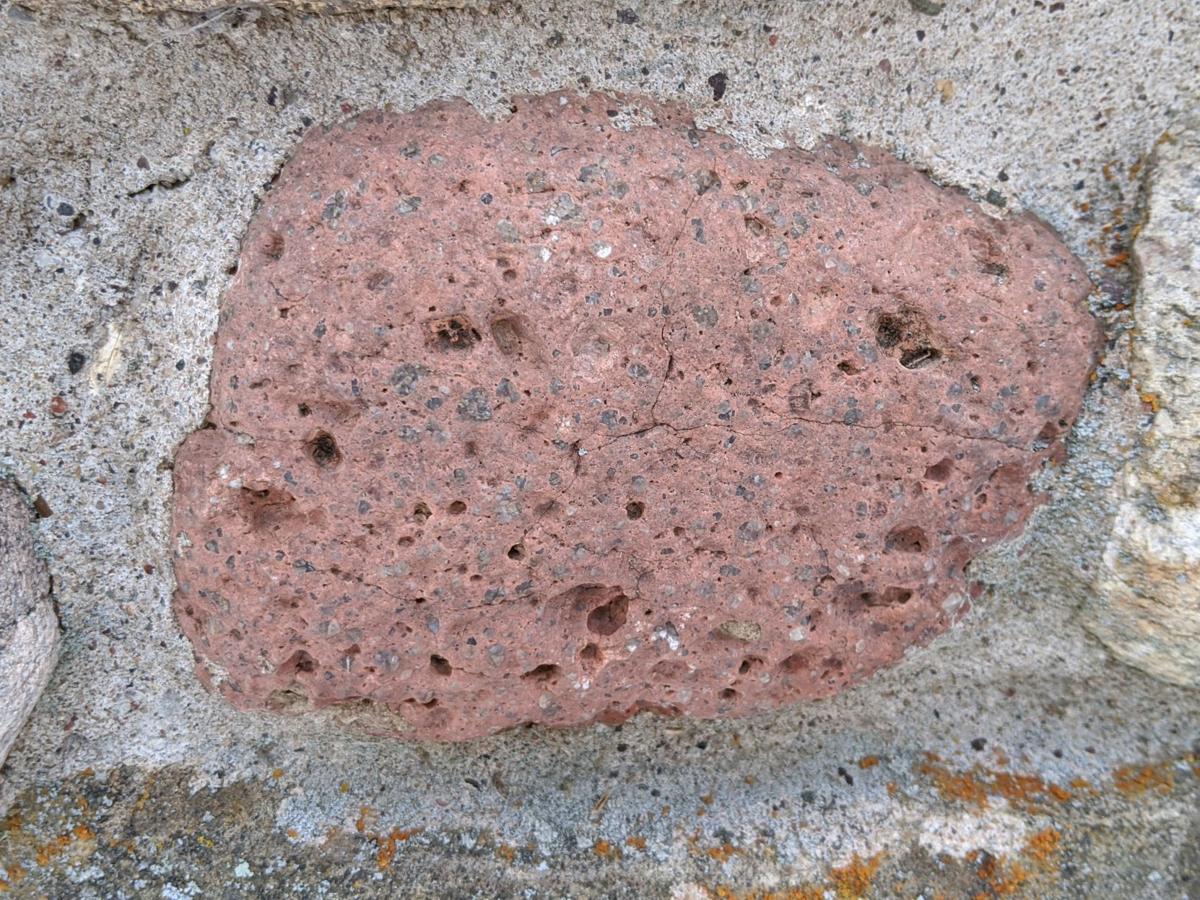 Rhyolite is one of the volcanic rocks that can be seen in the stone wall. 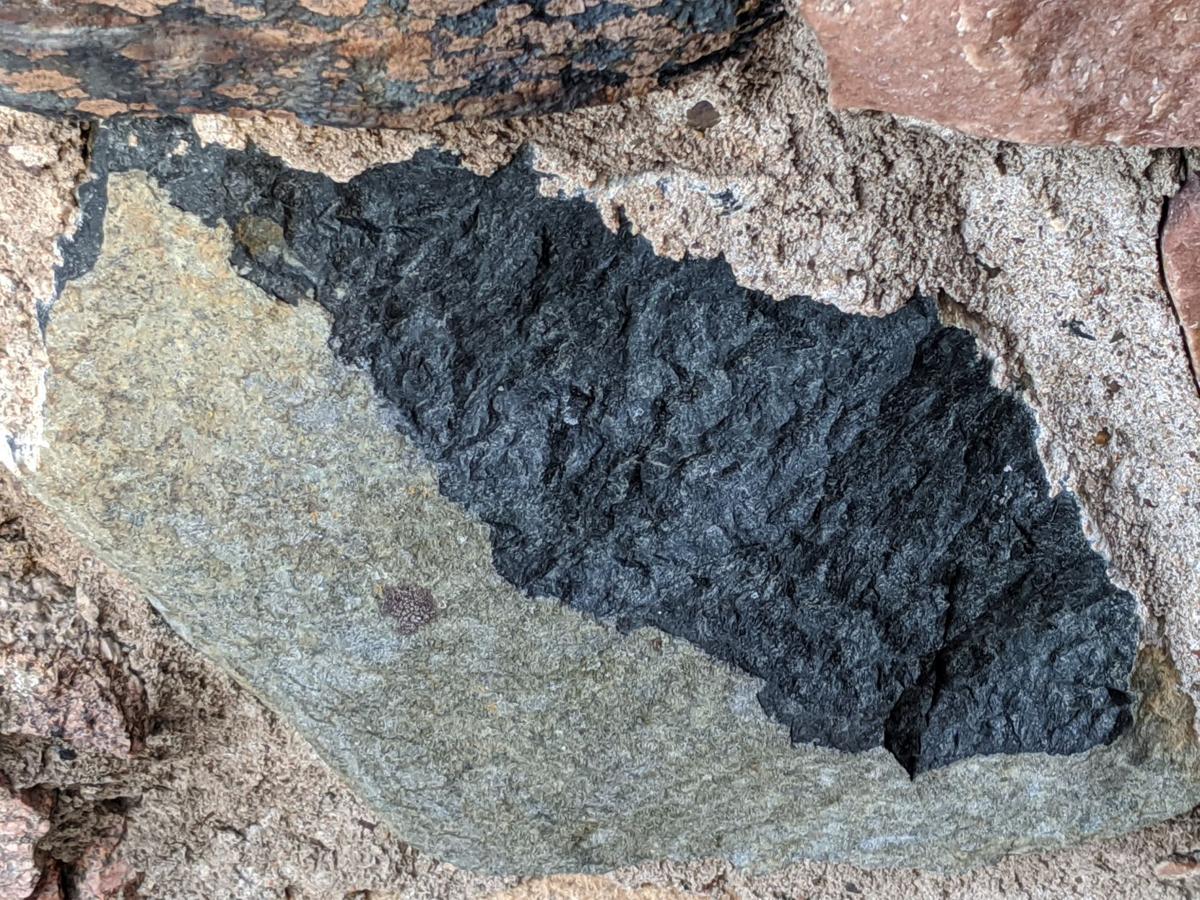 Black basalt is another type of volcanic rock on the stone wall. 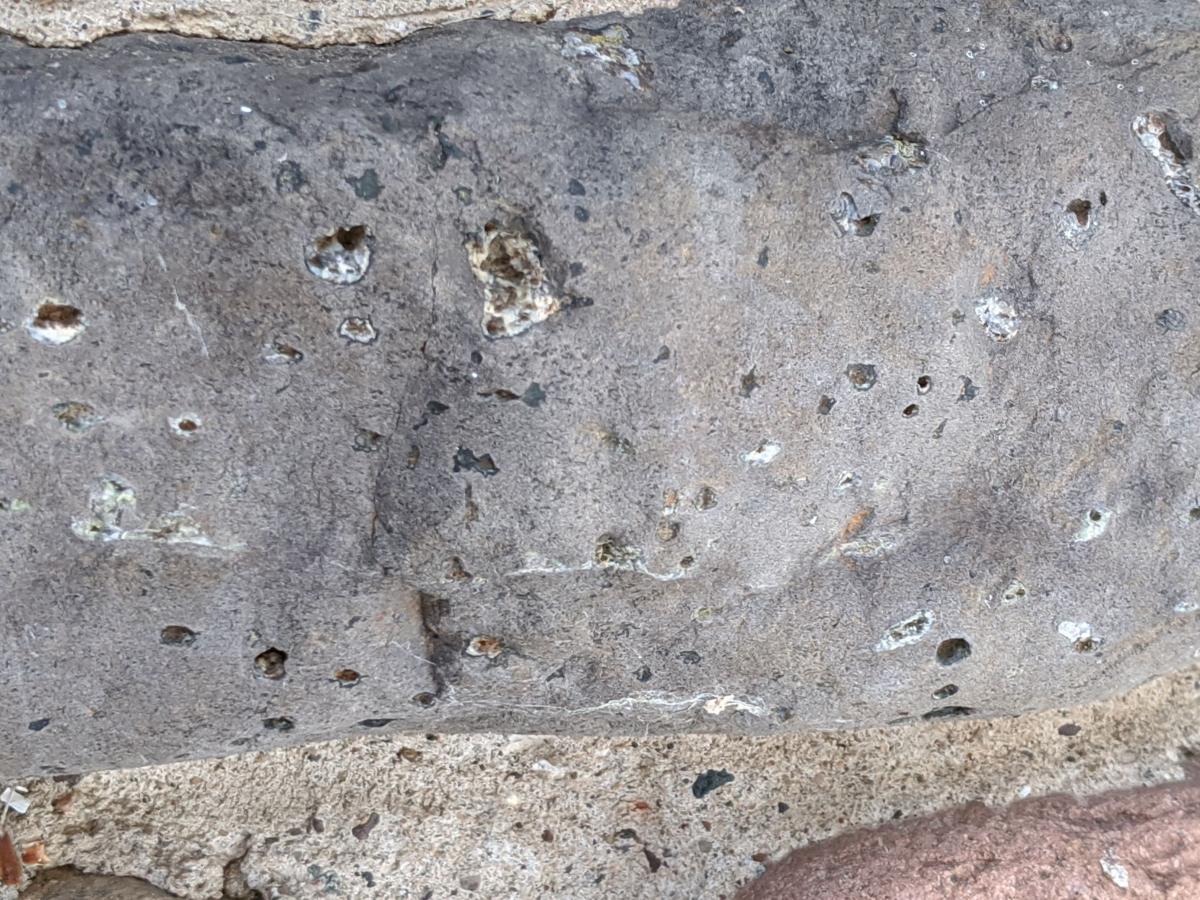 Another volcanic rock is vesicular basalt. 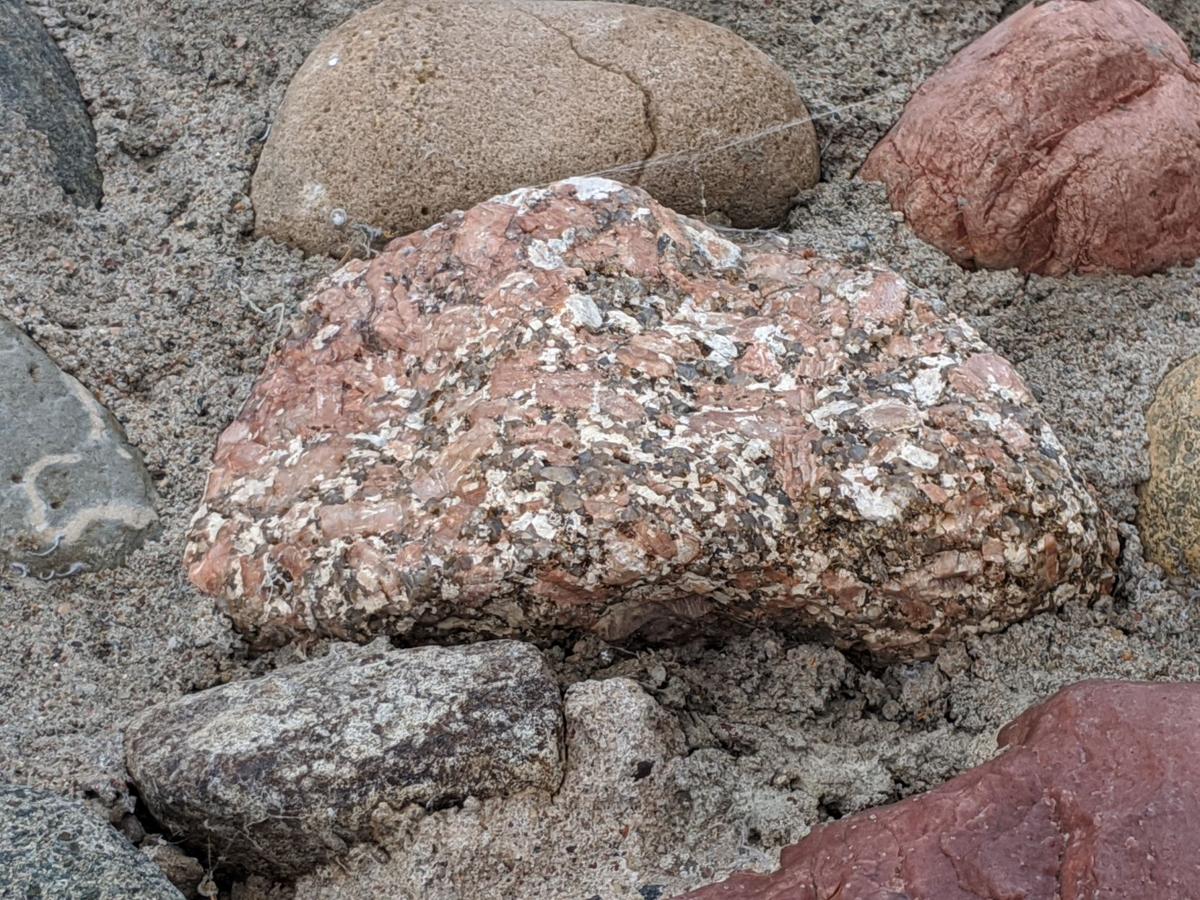 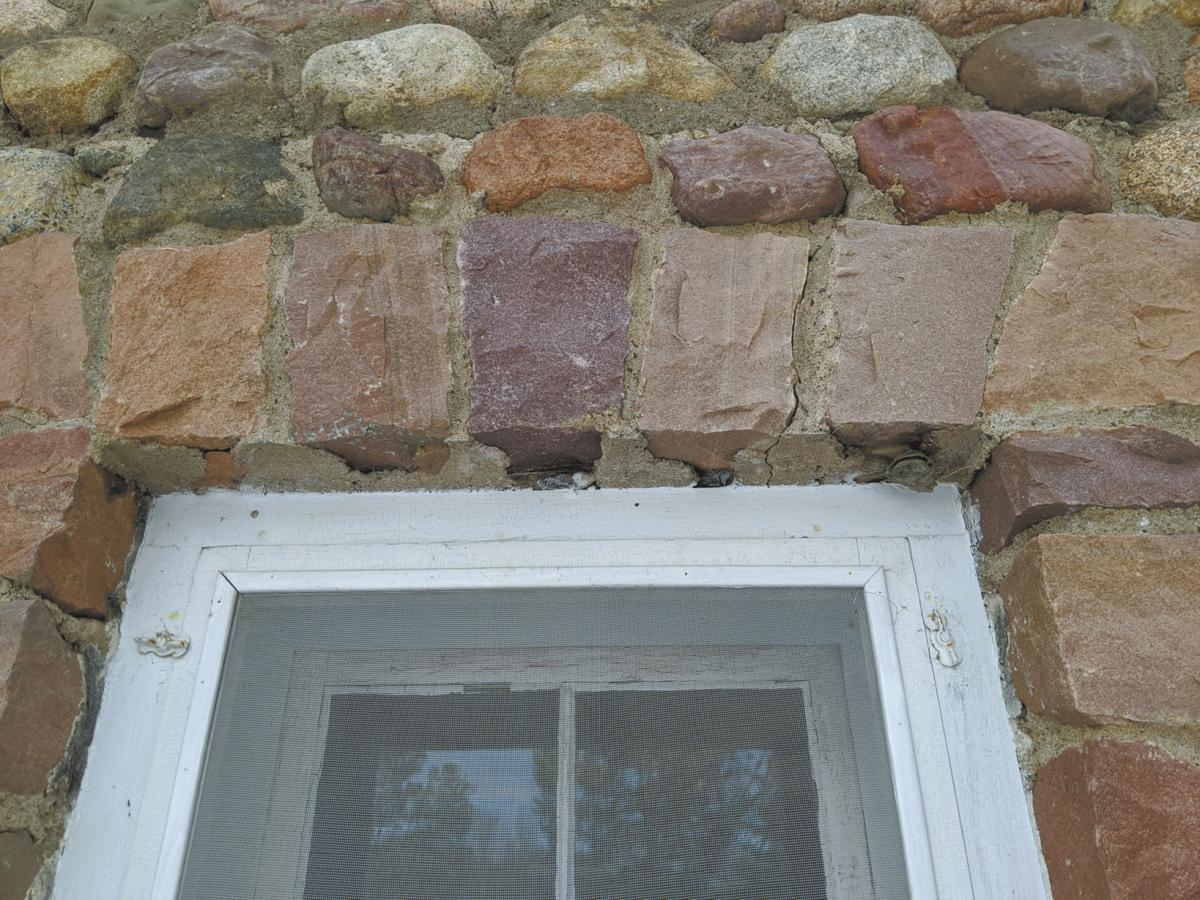 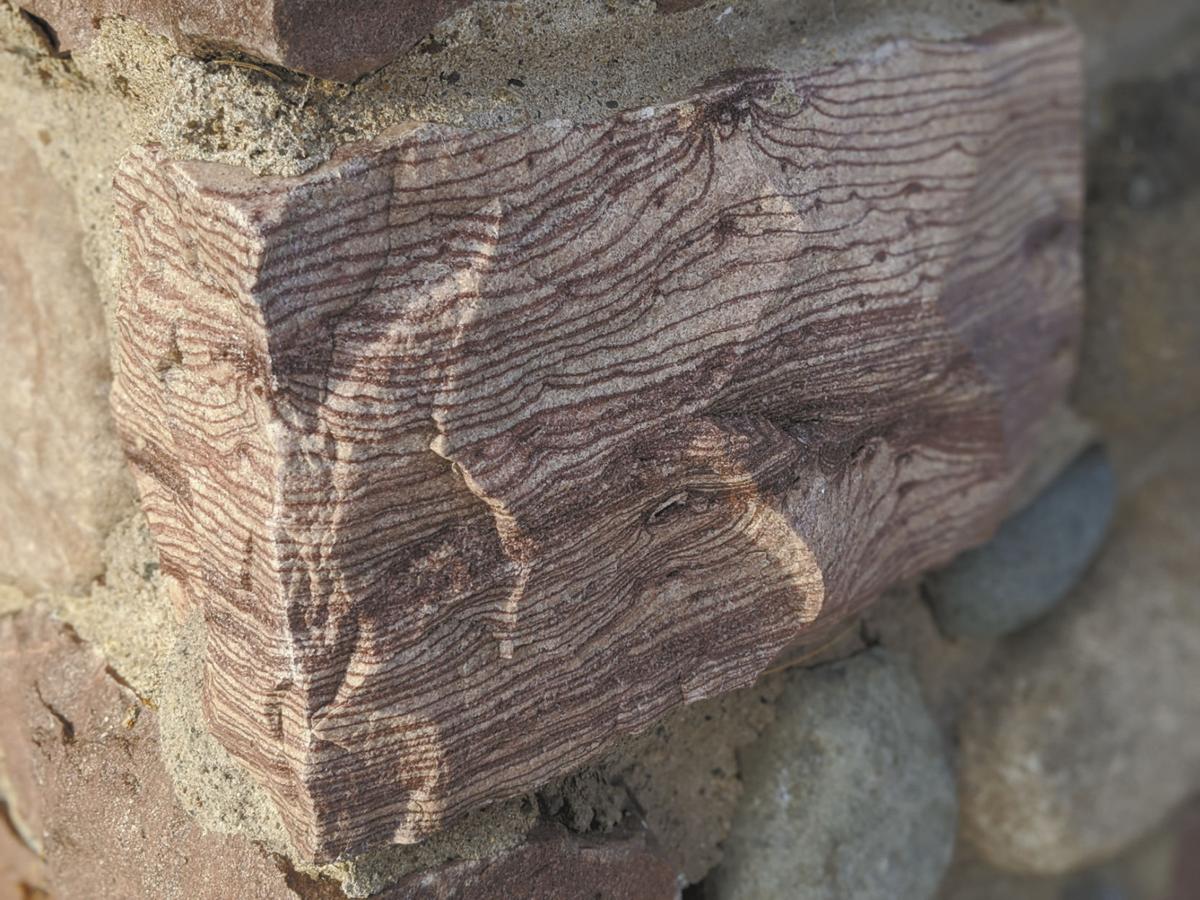 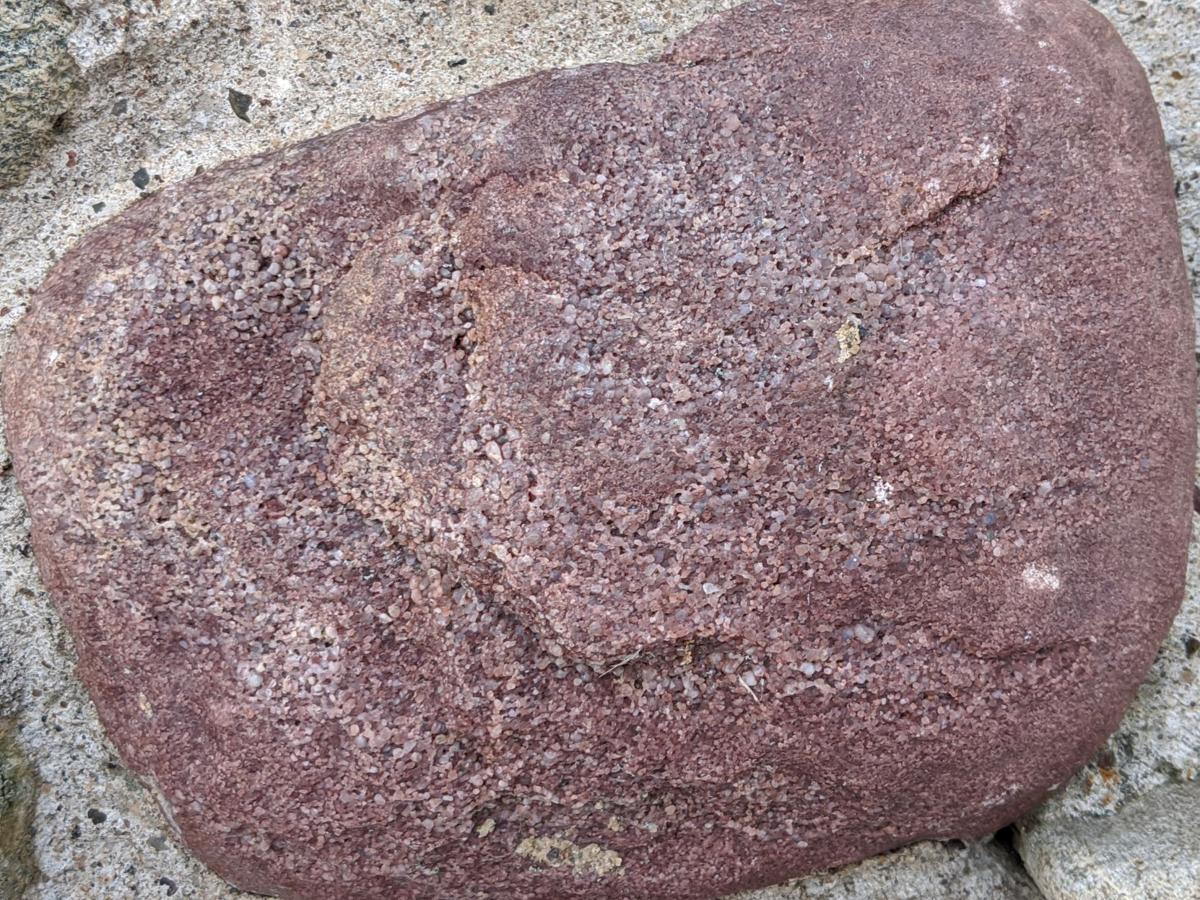 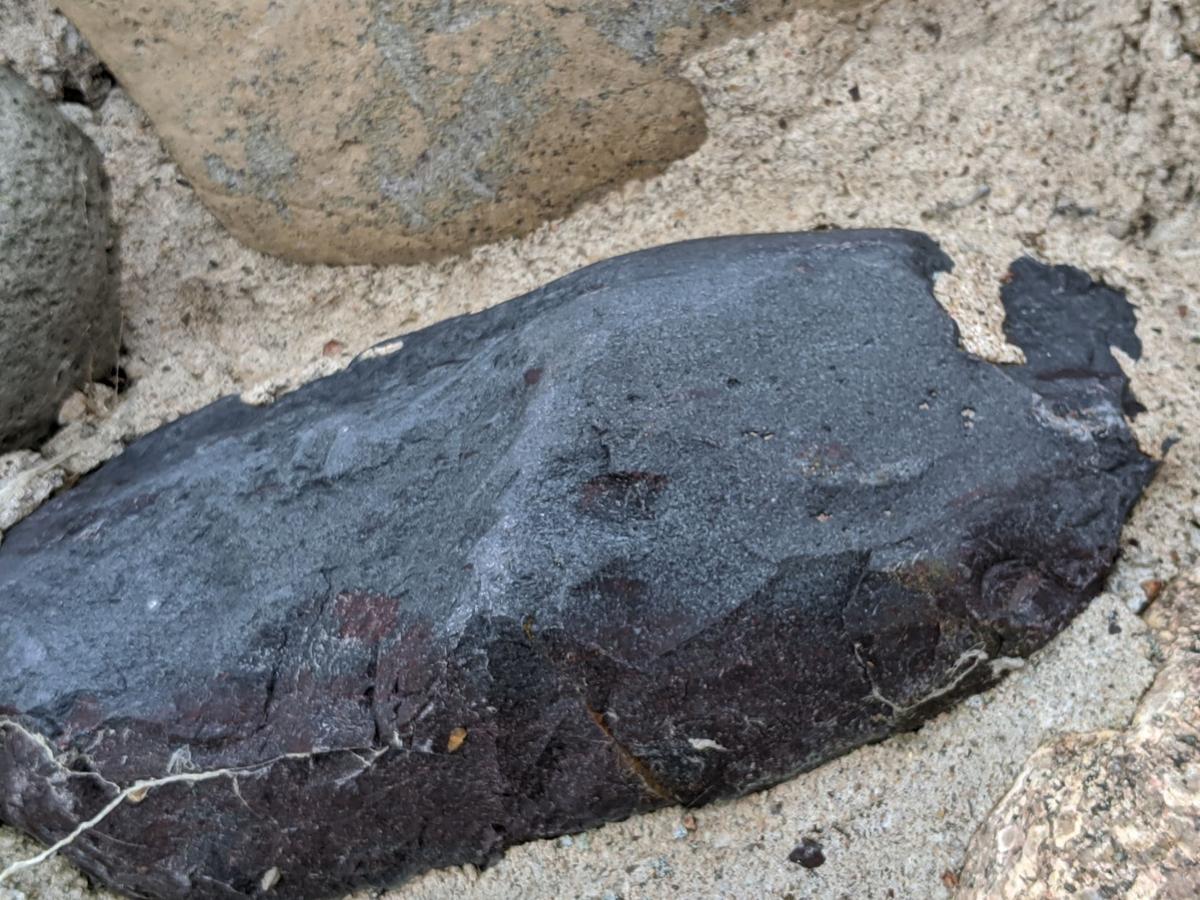 A iron rock is in the wall. 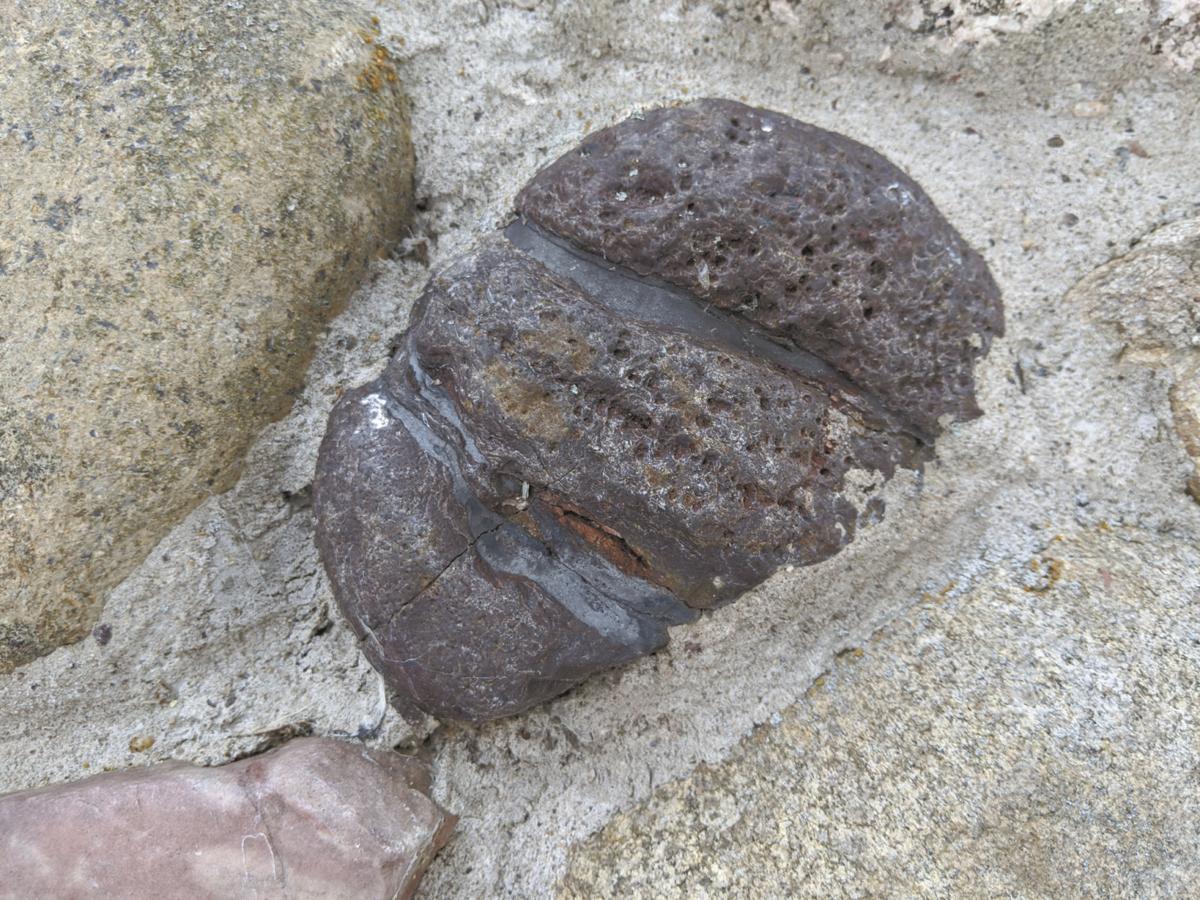 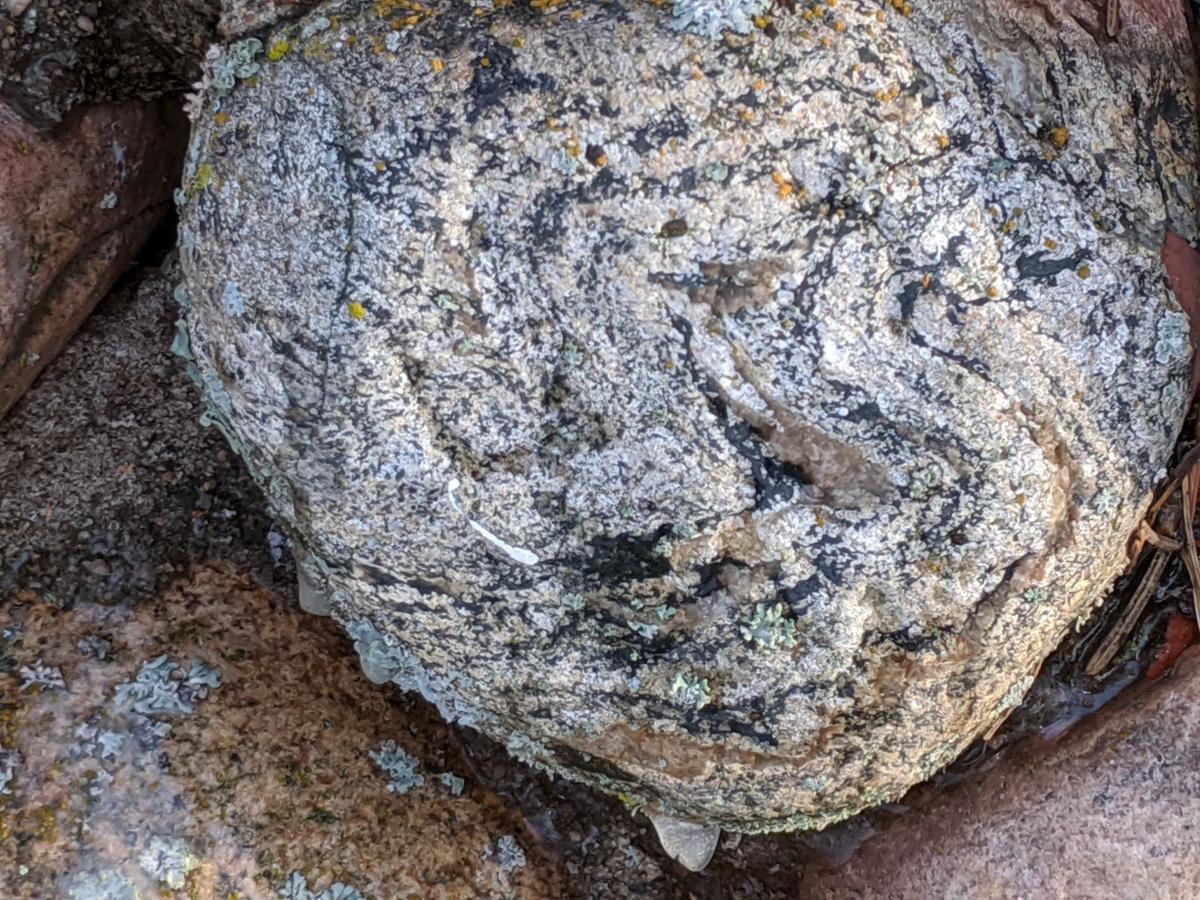 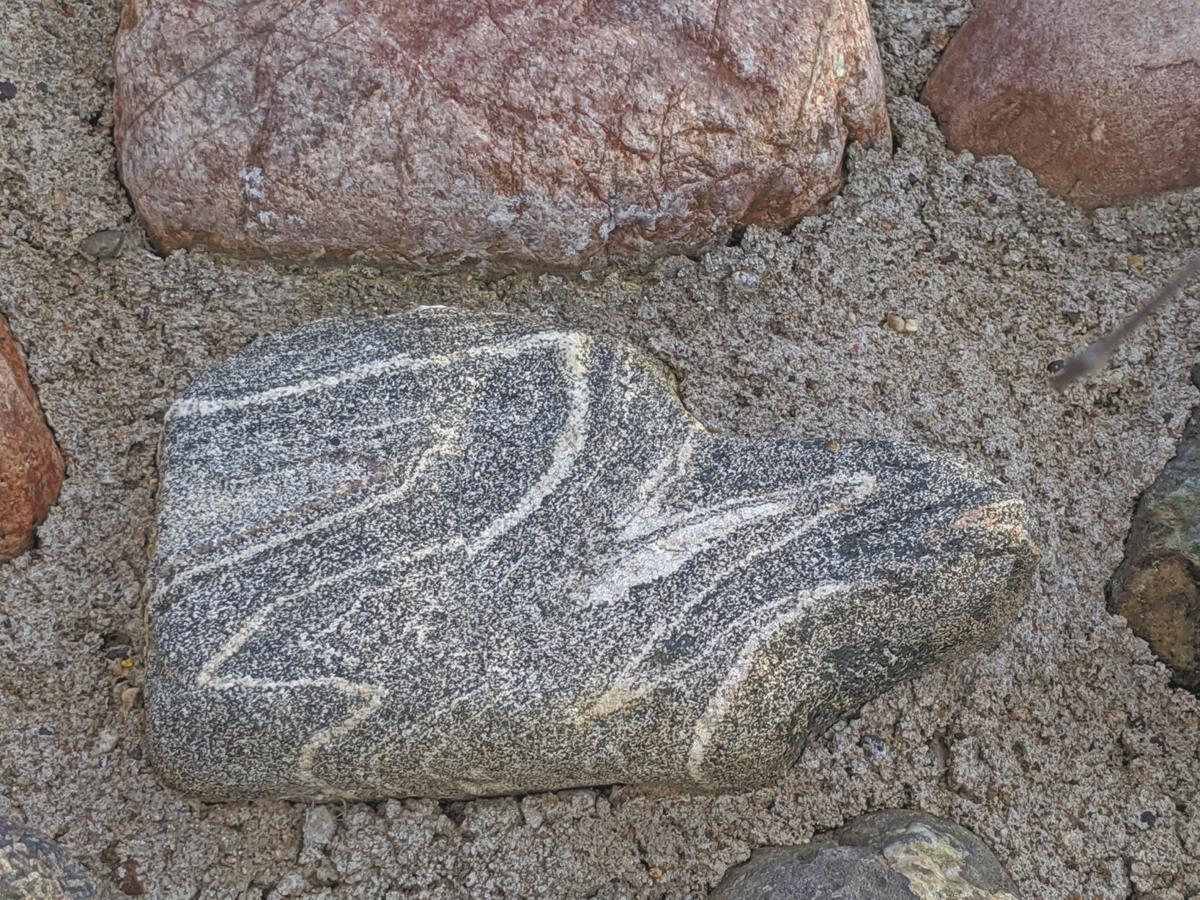 Gneiss... pronounced "Nice" is made during mountain creation.

The Hideout, the former lodge of the infamous Prohibition gangster Al Capone, has stone walls that reflect the region's geological history.

Rhyolite is one of the volcanic rocks that can be seen in the stone wall.

Black basalt is another type of volcanic rock on the stone wall.

Another volcanic rock is vesicular basalt.

A iron rock is in the wall.

Gneiss... pronounced "Nice" is made during mountain creation.

Over the Christmas holidays, Dec. 21-22, the Lac Courte Oreilles tribe offered the public a chance to catch a glimpse of the Hideout — the former lodge of gangster Al Capone in the Town of Radisson.

Most spent “Christmas at the Hideout” exploring the ground floor of the main house, and a few walked down to the basement of the historic site. But the locally-gathered rocks that comprise the walls of the stone structure intrigued one visitor in particular.

Michael Heim, a professor of natural sciences at Lac Courte Oreilles Ojibwe College, has given many public presentations on the geology of northern Wisconsin. He pointed out that since the stones had been protected by the roof of the structure, which was built in the 1920s, there is a well-preserved area of rocks that are not covered by lichen or moss.

Upon close inspection, the walls revealed that a variety of different regional rocks were used in the construction of the lodge. Heim found in them a collection of geological material that also opens a window into the ancient history of the region. Most of the rocks were transported here from various points to the north by the last continental glaciation, around 12,500 years ago.

Interestingly, several of the stones have volcanic origins. In the Lake Superior region, Heim said, three “stratovolcanoes” — the explosive high-peaked kind like Mt. St. Helens — occurred during the time of the midcontinental rift, about 1 billion years ago.

“Rhyolite (a reddish, pock-marked rock) is from lava consisting of melted continental crust,” he said. “Continental crust contains a great deal of silica, which makes the lava sticky like Silly Putty. Thus, you don’t find much of it, as it doesn’t flow very well. Black basalt, however, originates as lava from melted oceanic crust and contains very little silica, so it is much more abundant.”

He added that the Hawaiian Islands are made mostly of basalt; the lava flows over the island like pancake syrup.

Another type of basalt he pointed out was vesicular basalt. It appears splattered with gas bubbles.

“The bubbles (vesicles) have partly or wholly filled with minerals deposited by groundwater moving through the rock over a long stretch of time,” he said. “The lower pressure in the bubbles compared to the surrounding rock caused the minerals to come out of the solution. This is exactly the same way that stalactites and other cave formations form. Agates, a local semi-precious stone, formed this way within vesicular basalt.”

Another rock that he said “resembles a pizza” is granite.

“It originated as magma from melted continental crust,” he said. “The relatively large size of the mineral grains indicates that it cooled deep underground. There, insulated from the cool temperatures at the surface, the mineral crystals had time to grow as the magma slowly cooled. The larger the crystals comprising the rock, the deeper in the earth it cooled. The pink rectangular mineral is orthoclase feldspar, while the grayish clear mineral is quartz. The feldspar slowly weathers into clay, while the quartz weathers into sand.”

According to Heim, most of the sand near Hayward and the clay near Lake Superior come from the weathering of granitic continental crust.

Heim also pointed out how the cut stones for the corners and the framing for the windows and doors is quartzite, the hardest rock. Unlike the other stones, it was quarried locally and was used where strength and durability were required.

He was especially intrigued by the shaped quartzite pieces above one of the windows.

“The stonemason chose several different shades of the same local quartzite to frame this window,” Heim said. “This is the Barron quartzite, which forms the Blue Hills between Rice Lake and Ladysmith and which extends north into Sawyer County as Pipestone Hill, Six Mile Hill and Meteor Hill. It originated around 1.7 billion years ago as sand in braided streams flowing from the rapidly eroding Penokee Mountains to the north. As more and more sediment accumulated it first turned into sandstone and later, under intense pressure, was compressed into quartzite.”

He added the same ancient stream sediments appear as the Baraboo Hills in southern Wisconsin and Pipestone National Monument in Minnesota. The courthouse in Sioux Falls, South Dakota, is built of the same quartzite.

Heim also pointed out some uncut quartzite in the body of the wall.

“So it is a history of prehistoric climate, like tree rings,” he said.

Course-grained Barron quartzite, another reddish rock, appears to consist of sand compressed together. Heim said the larger grains of this rock indicate a stronger stream current at the time they were deposited versus a slower current for the other quartzite rocks there.

One long, black stone Heim pointed out was made of iron ore. He identified another as metamorphosed (changed by a processes over time) rock with both silica and iron layers.

“The repeating silica-rich and iron-rich layers in this iron formation originated as sea bottom sediment and are likely due to seasonal changes around 2 billion years ago,” he said.

In one rock of glassy chert, he identified what might be stromatolites, a fossil of an ancient blue-green algae reef. It looks like a whitish, worm-like form had been fixed in the rock.

“These are the oldest fossils on earth that one can see with the naked eye,” he said. “Some are several billion years old. Their significance to us is that the algae (actually a type of photosynthetic bacteria) produced the oxygen in earth’s atmosphere, which all later animal life including us depends upon.”

Another rock, gneiss, is a black and white banded rock with wavy white streaks. He said it is the most metamorphosed rock to be found in the region.

“It formed from other rock subjected to intense compression and heat during mountain formation from colliding tectonic plates,” Heim said. “The force was so intense that minerals separated, flowed around each other, and were sorted by density. The darker bands are dense minerals while the lighter bands are less dense — kind of on the order of oil and vinegar. The rock was also twisted and deformed. It could have originated from continental collision in the Penokee Mountains of northern Wisconsin, or from older rock in Canada.”

Besides the many rocks Heim could identify in the Hideout wall, there were a few others he couldn’t confidently name.

“The stones comprising the walls of the Hideout represent pages of earth’s history spanning over a billion years of time — close to 2 billion if you count the glacial ice which moved and shaped most of them,” he said. “So not only are they beautiful, but each one tells a story, whether it be of volcanic eruptions, colliding continents, vast river systems or life’s early existence.

“Northwestern Wisconsin is a fascinating place to study and enjoy geology, for so many interesting and diverse events are exposed here, for our eyes to read and our minds to contemplate.”

Home for the Holidays