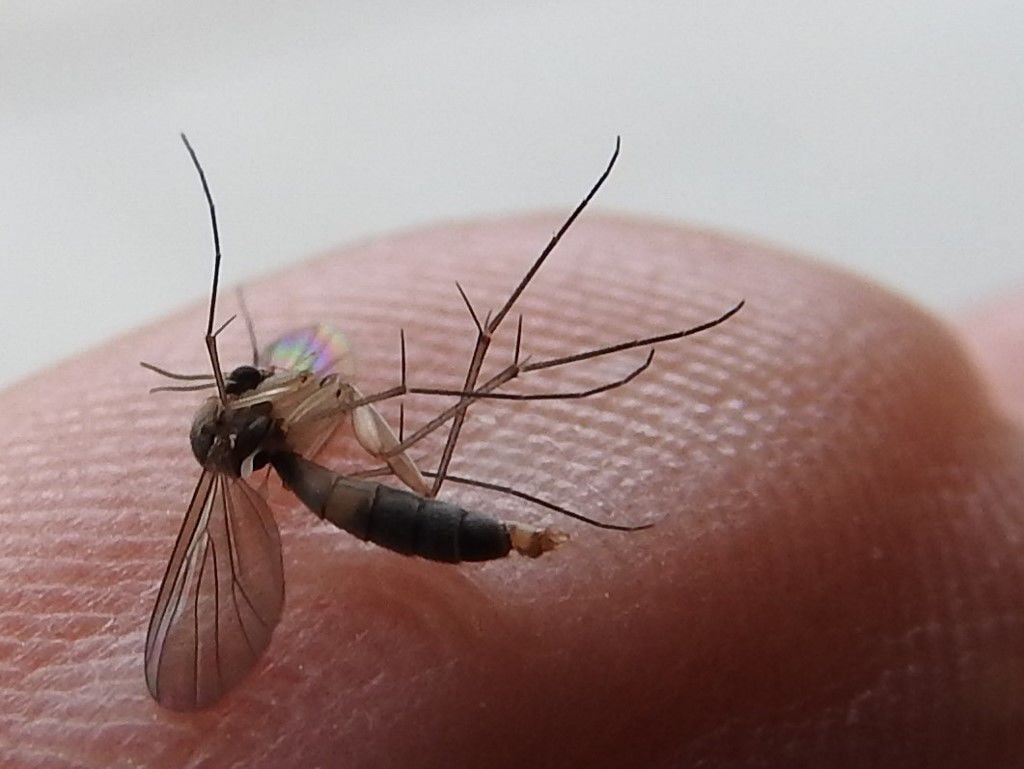 Fungus gnats may look like mosquitos as they hover around your window frames, but if you can get a close look without squashing them, little spines on their knees give them away. 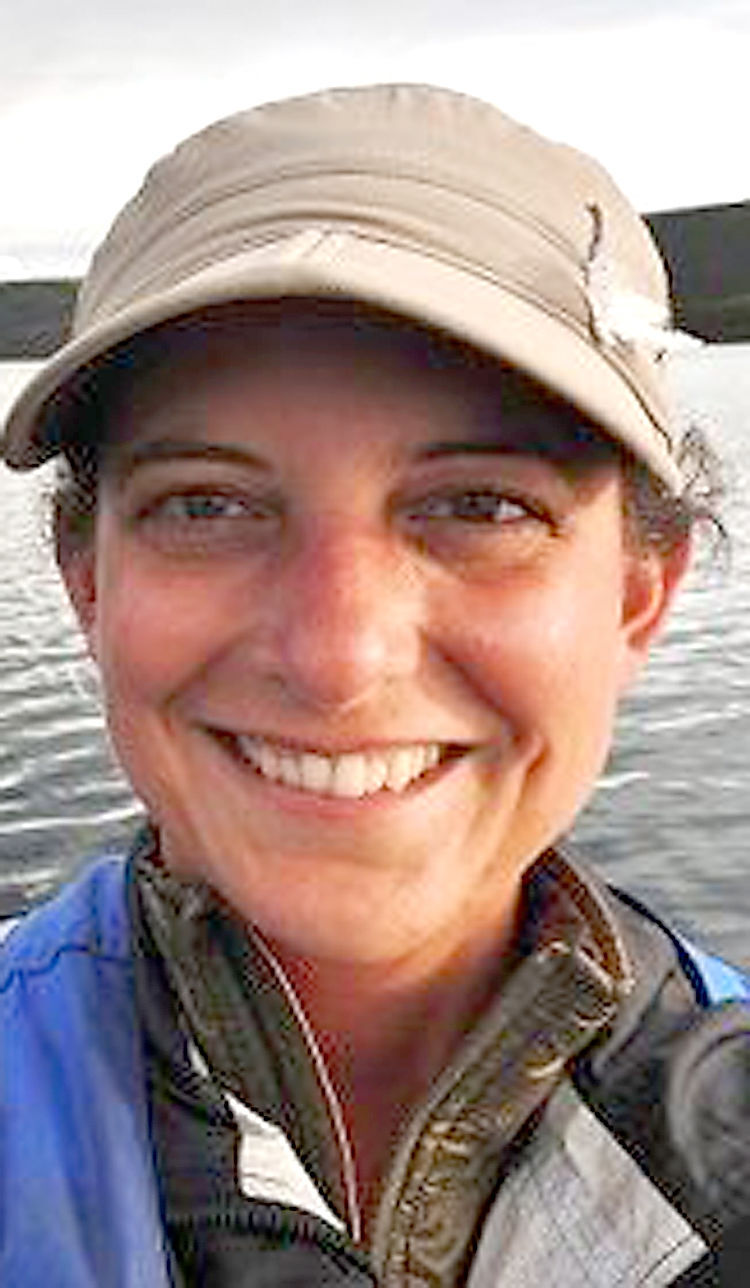 One evening a few weeks ago, I looked up from my computer to see a thick swarm of mosquitoes at my window. Hundreds, maybe thousands, of the tiny, leggy, little buggers bounced against the screen in the lamplight. More swarms greeted me in the morning, as they knocked against the windows and formed a gauntlet to my car. Several carpooled to work with me. Others joined me while brushing me teeth the next evening.

The bugs were everywhere. But none had landed on me, or tried to bite, or even buzzed in my ear. That’s not typical mosquito behavior. So in the spirit of science, I caught one out of midair and gently squashed it. Even a hand lens couldn’t tell me much about this tiny tangle of legs, but after a photo shoot with my macro setting, I was able to ascertain this critter’s innocence: it was definitely not a mosquito.

The spines on its knees were my first clue. The lower joint of each leg had at least one and sometimes multiple little pointy prongs sticking out of it. The two tiny wings were clear and delicately veined. The abdomen was narrow and dark, with a lighter tip. And, most oddly, a projection on the underside of its thorax, what we’d think of as our chest, almost looked like a pale-colored mite clinging like a monkey on his mom.

Stumped, I sent my photo around — first to one entomologist friend, then another. When between the two of them I came up with the family Mycetophilidae and the common name “fungus gnat,” I sent the photo to “my mushroom guy” and he confirmed, “Definitely Mycetophilidae. Huge family over a thousand spp. Google glow worms . . .”

Mycetophilids are in the order Diptera with mosquitoes, gnats and other two-winged flies. As I parsed the Wikipedia article, everything began to make sense. They are described as having a “strongly humped thorax and well-developed coxae.” Did I know that an insect’s coxa is the base of its leg, roughly equivalent to our upper thigh? Definitely not. But the humped back and large, pale-colored coxae on my insect are what had looked like a monkey-baby mite to my unaided eye. Fungus gnats are also said to have spinose legs, which must be the scientific way to describe bayonets sticking out of your knees.

I was a little disappointed that none of my entomologist friends could identify my little guy to species. As it turns out, this would require close study of wing venation (ok, that’s not too hard) and chaetotaxy (which means the arrangement of the bristles on their body), and genitalia (which strikes me as a little too invasive for such a recent acquaintance). Plus, with over 3,000 species in Mycetophilidae, it might take weeks to get through a dichotomous key.

“Most of their natural history secrets remain untold,” wrote Peter H. Kerr in his entry on fungus gnats for the Springer.com Encyclopedia of Entomology. That may be so, but we know more than nothing. For instance, fungus gnats occur on all continents except Antarctica. Most (but not all) types of fungus gnats feast on the fruiting bodies, mycelia and spores of fungi. They prefer damp habitats where their favorite fungi grow, and sometimes form thick swarms. In those forests, they play an important role in the food web.

A few species of fungus gnats become pests in the damp soil of gardens, farms, nurseries and overwatered flower pots. Most of the time, though, a female fly will lay her eggs — up to 1,000 in her week-long life — in the cap of a freshly sprouted mushroom. The larvae develop quickly (three weeks from egg to adult) while burrowing into the cap, or make sticky webs on its underside. A few types of larvae are semi-predacious and may eat other insects who visit the mushroom.

Later I took my mushroom guy’s advice about Googling “glow worms.” Radiant turquoise jewels dripping from cave ceilings appeared in Google Images. As it turns out, in a related family of fungus gnats, about a dozen species have developed bioluminescence. They mostly live in sheltered grottos in New Zealand and Australia. There, tiny larvae spin nests out of silk on the ceiling and dangle dozens of threads of silk beaded with droplets of mucus. Breathless, calm habitats are necessary so that their lines don’t get tangled. Breathless, I’m sure, are explorers who find a replica night sky illuminated on the ceiling of a cave.

The gnat larvae’s glow results from luciferin, a chemical compound similar to that used by fireflies. A hungry larva glows brighter than one who has just eaten, and that glow lures midges, mayflies, mosquitoes and moths to their doom.

A trip to New Zealand may be in order someday, but for now, I’m just happy to know that it wasn’t a pack of mosquitoes still trying to invade my house in November!

Emily’s note: This article was originally published in 2016, but the fungus gnats are back in full force, so I wanted to share it with you again!

For more than 50 years, the Cable Natural History Museum has served to connect you to the Northwoods. The Museum is now open with our exciting Mysteries of the Night exhibit. Follow us on Facebook, Instagram, YouTube and cablemuseum.org to see what we are up to.

Online Survey Question: "Should you have a right, as a healthcare consumer, to know whether your individual healthcare provider – doctor, nurse, EMT, optician and others – is vaccinated for COVID-19?

A question concern whether patients/consumers of healthcare have a right to know whether the person they are seeking medical assistance from has been vaccinated for COVID-19?