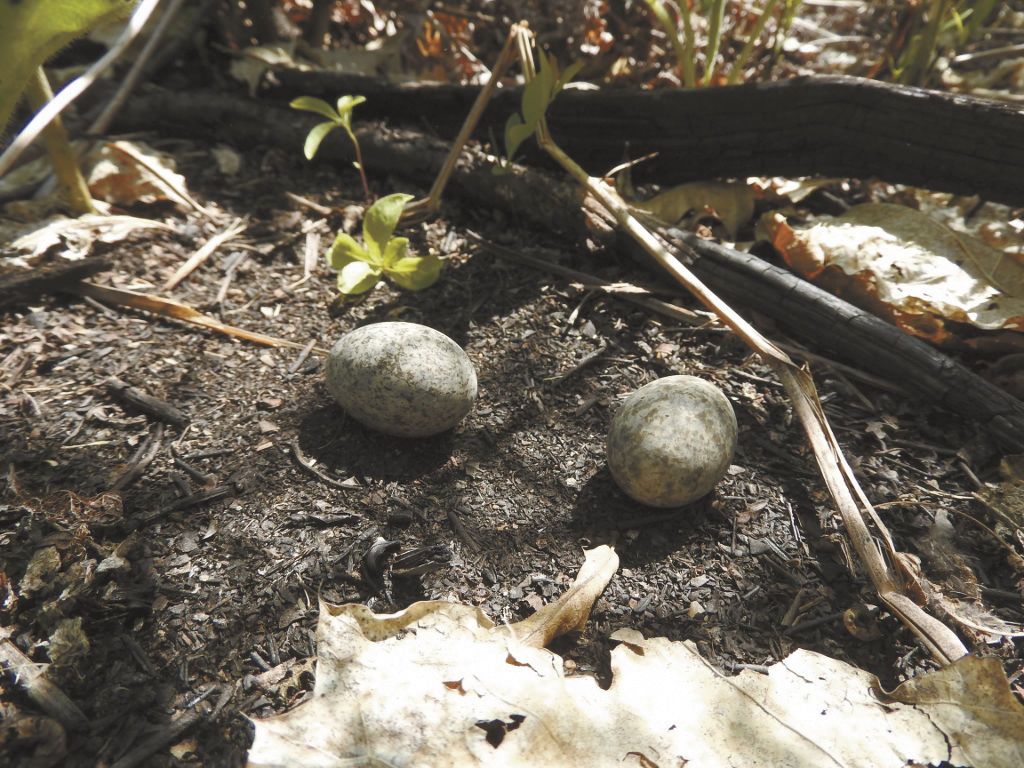 Common nighthawks don’t build a nest; they try to be as inconspicuous as possible by laying their eggs directly on the ground. 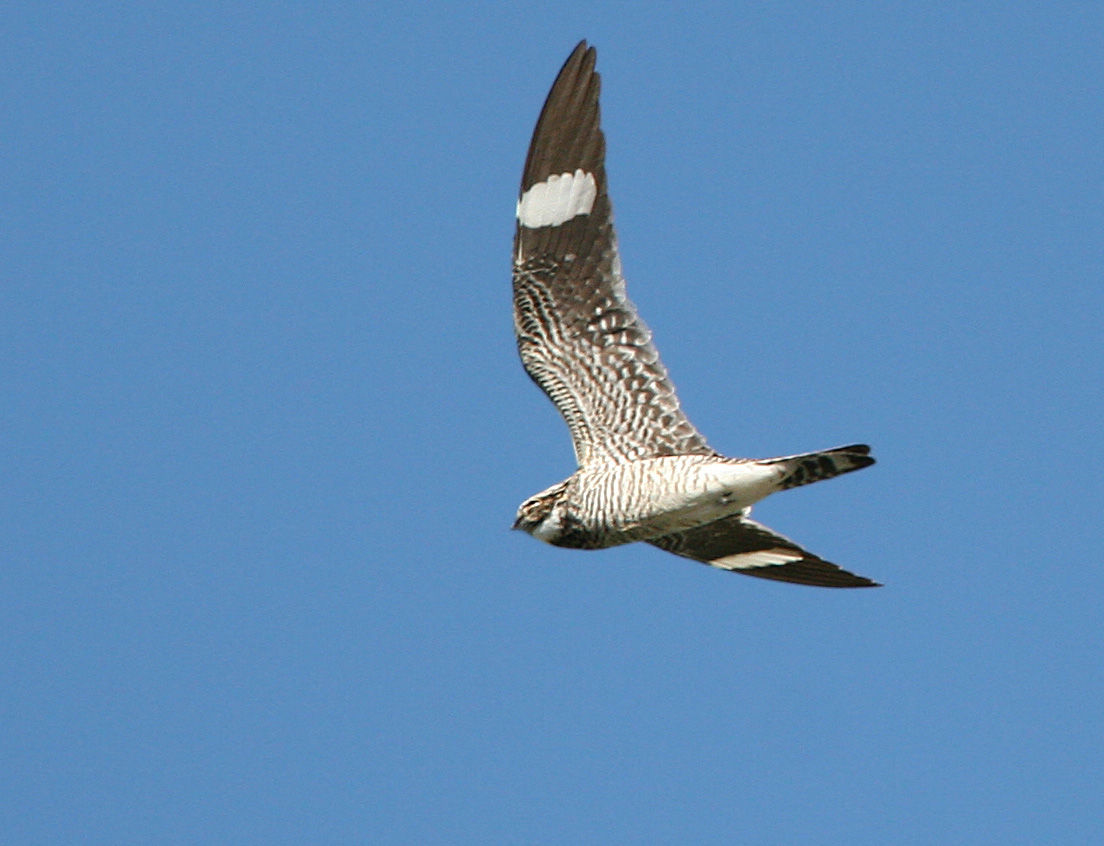 The white wrist blazes on the wings of common nighthawks make them a striking addition to the evening sky.

For both comfort and camouflage, nighthawks tend to perch along the top of a branch.

Photo by Emily Stone
1 of 2

Common nighthawks don’t build a nest; they try to be as inconspicuous as possible by laying their eggs directly on the ground.

The white wrist blazes on the wings of common nighthawks make them a striking addition to the evening sky.

Evening light bathed the scrubby, rolling hills of the Moquah Barrens in gold. Eastern towhees and willow flycatchers called from the tallest shrubs and charred skeletons of trees. And every time the breeze calmed, the black flies swarmed.

But when the breeze returned, the black flies retreated. So I followed my camera up and down the road for several happy minutes, until a truck with a pop-up camper rumbled over the hill in a cloud of dust. The sight of Jim Bryce’s smile through the windshield was enough to put a smile on my face, too. Being alone in nature is lovely, but sharing it with a kindred spirit is even nicer.

Hand-over-hand, Jim pulled a bundle of long metal poles out of the tailgate. Then came a bundle of wooden signs, and a lumpy plastic bag full of nets. We each took an armful. Earlier I’d found a year-old strand of blue flagging on the roadside. We re-hung it on a hazel twig and crashed uphill through the brush on a barely discernable trail, chatting all the way about the work that lay ahead.

Jim Bryce is a retired forester who has banded birds for several federal agencies. This is the sixth June that he’s set up three mist nets on a certain hillside in the Moquah Barrens on the Bayfield Peninsula. He’s keeping track of how the birds fluctuate in relation to the prescribed burns that the Forest Service is using to restore this habitat.

As we located the flagged net sites, raised the poles, untangled the nets, and posted signs declaring this a legitimate research project, Jim kept up his usual constant stream of explanations and anecdotes about bird banding. The third and final site caused us some consternation with a twisted net, so the once-vivid sunset was deepening to purple by the time we closed the net and gathered up our tools for the hike down. Then, from the dusky sky came a distinctive “peent.”

Of course our heads snapped around toward the sound, and we easily spotted the source: two medium-sized birds danced against the deep blue sky, their long, tapered wings marked by blazes of white across the wrists.

Common nighthawks eat flying insects by expanding their tiny beaks into cavernous mouths and darting through swarms. At flight speeds of 12-35 miles per hour, the insects that enter their mouths go straight down the hatch and meet their demise in a pool of digestive juices. These owl relatives find insects through sight alone, and so don’t actually forage at night, but are most active around dusk and dawn. On the ground, nighthawks’ weak beaks and tiny feet prevent them from feeding at all.

Suddenly, their normal, plaintive, peent calls were interrupted by a soft roar, like the sound of a racecar zooming past. This “booming” is part of the male’s mating and territorial display. The sound is created when air rushes through the tips of his feathers at the bottom of a dive, and it sent shivers down my spine.

In the bright sunshine of the next morning, those memories faded from my thoughts. Jim led a group of Master Naturalists from net to net, hoping to catch one last little songbird before the program ended. Between the second and third nets, the participants at the front of the group exclaimed as a nighthawk burst up from the brush. After some searching, we found her nest. In the center of a bare spot, lined only by black ashes from the last burn, sat two eggs, mottled heavily with gray and brown spots.

“That’s it?” Several people exclaimed about the austerity of her nest. Ground nesting birds are especially vulnerable to predators, but the nest’s simplicity is part of their strategy to avoid discovery. The spots on the eggs were remarkably similar to the texture of the ash, and there’s some evidence that she may have chosen the nest site to match her eggs.

As our attention turned away from the eggs, we spotted the female nighthawk in a nearby tree. Her mottled brown body was positioned along the branch, using both shape and color for camouflage. She would have been invisible to our eyes on the ground, and invisible to the nose of a coyote or skunk, too, since the oil she uses to preen her feathers becomes odorless during the nesting season.

While the male rarely incubates eggs, he will eventually help with feeding the young regurgitated insects at dawn and dusk. Within the first two days, the chicks double in size, and by day 18 they will make their first flight.

If this seems like a vulnerable way to live, you’re right. Common nighthawk numbers are in steep decline — falling by 61% from 1966 to 2014 worldwide. In Saskatchewan, scientists found that the decrease in numbers coincided with the spraying of pesticides for mosquito control. Even if a pesticide doesn’t kill birds directly, removing their food source is just as effective. This is likely a major part of their demise across all of North America.

As I sit at home, days later, this information gives me a new perspective on the black fly bite that still itches on my neck. Folks here in the Northwoods often imagine how wonderful our world would be without the swarms of annoying insects that mar our short summers, but we usually don’t imagine the full set of consequences that wish would bring. I’m happy to put on a head net, suit up in long sleeves and long pants, and use a little bug repellent if it means that nighthawks can go on peenting and booming; their white wrists flashing against a purple evening sky.

For more than 50 years, the Cable Natural History Museum has served to connect people to the Northwoods. The museum is currently closed due to COVID-19, but staff is still building the new exhibit and bringing educational content. Connect with them on Facebook and Instagram to see what they are up to.

How do you plan to cast your ballot in the November presidential election?