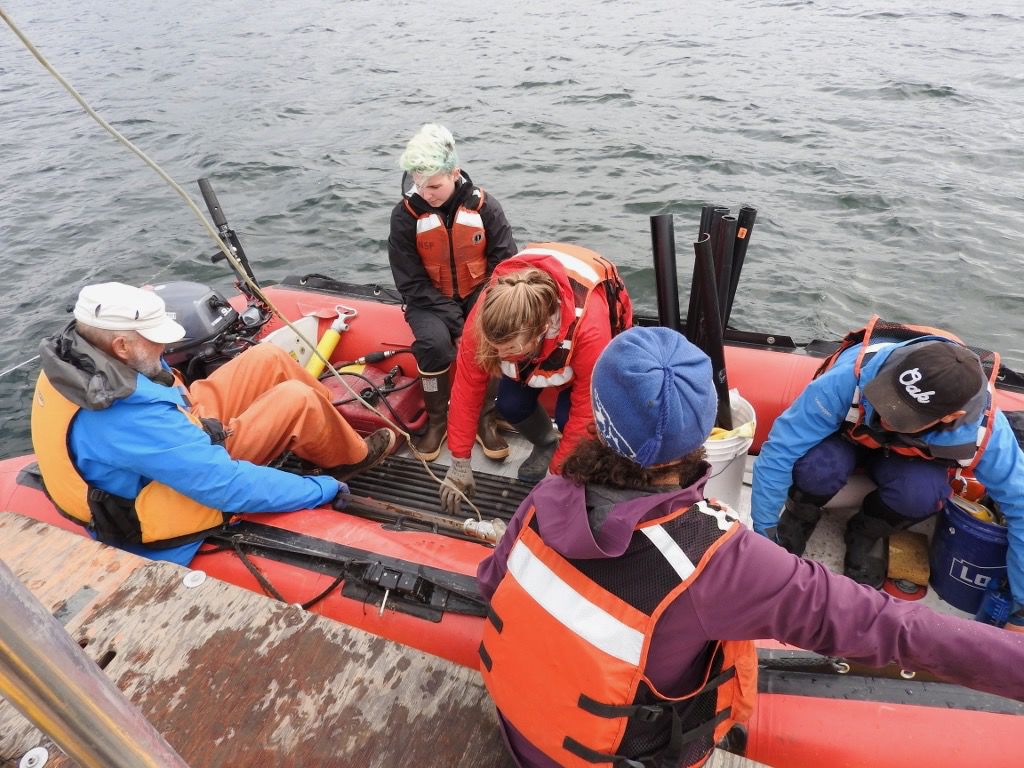 It takes a crew of at least three, and ideally four or more people to do the work of sediment coring. Crowding into their tiny inflatable boat, the scientists extrude a sediment core from the Livingstone-type drive rod piston corer. 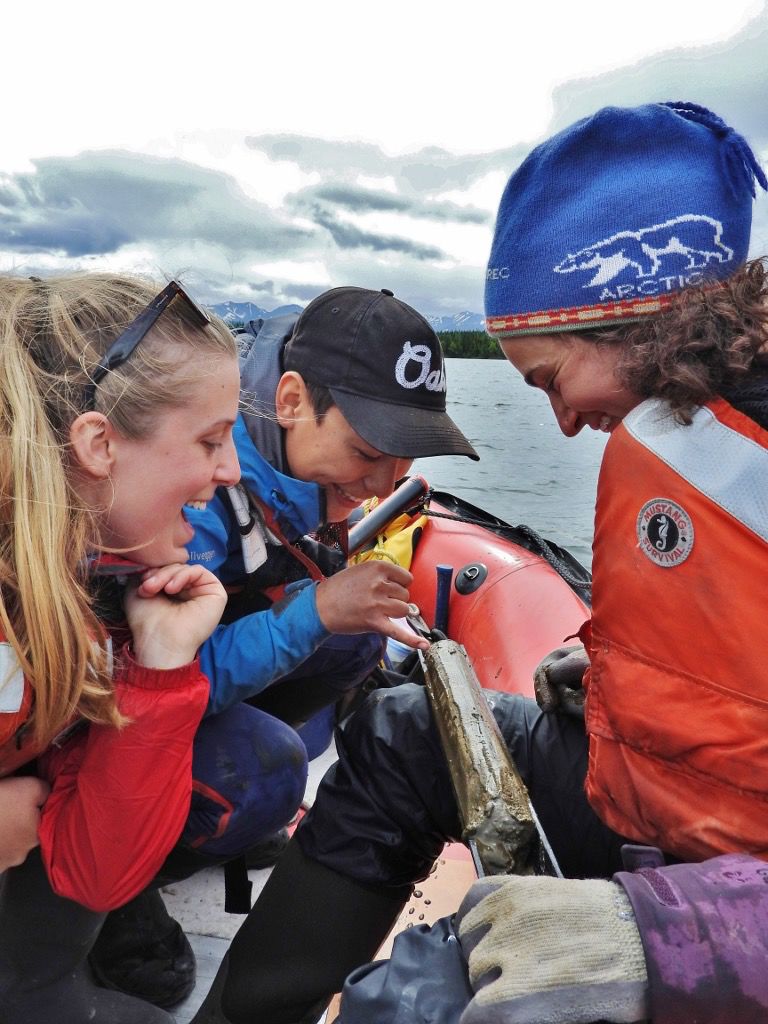 These girls are genuinely excited about science and love the work of discovery. From left: Emmy Wrobleski, Annie Wong and Ellie Broadman. 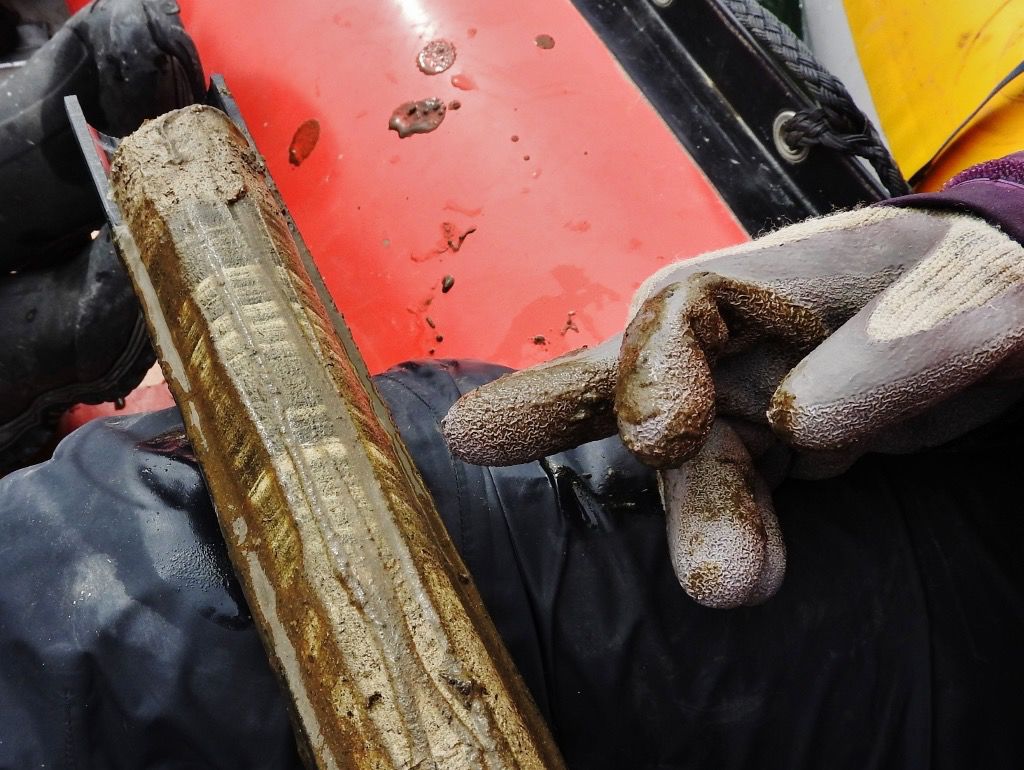 At the very bottom of Kelly Lake’s sediments, striking layers of light and dark appear in the historical record. 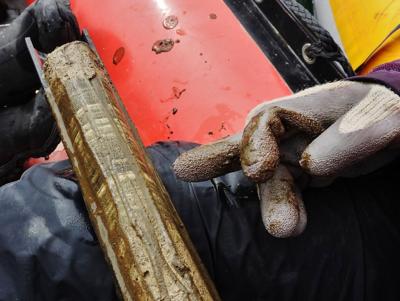 This crew of female scientists has spent the past few weeks taking samples of lake bottom sediments in Alaska. Here they stand on their custom-made coring raft. From left: Abby Boak, Ellie Broadman, Emmy Wrobleski and Annie Wong.

It takes a crew of at least three, and ideally four or more people to do the work of sediment coring. Crowding into their tiny inflatable boat, the scientists extrude a sediment core from the Livingstone-type drive rod piston corer.

These girls are genuinely excited about science and love the work of discovery. From left: Emmy Wrobleski, Annie Wong and Ellie Broadman.

At the very bottom of Kelly Lake’s sediments, striking layers of light and dark appear in the historical record.

Many hands helped push, pull and stabilize the hollow metal pipe and its plunger until a cylinder of mud extruded from the far end like a gritty line of decorative frosting. A slick coating of soupy mud had spewed out of the equipment as we lifted it from the water and now obscured the outer surface of the sediment core from the eager eyes of six geologists crowding into the tiny inflatable boat.

Once the sediment core was safely cradled in a custom-cut length of black plastic pipe, Annie Wong, who is working toward her masters in Paleoenvironmental Sciences at Northern Arizona University, whipped a knife out of one of her many useful pockets and began scraping away the goop. Striking dark and light stripes appeared in the core. We oohed and aahed. Like tree rings, these patterns record past events. Floods, droughts, fires, phytoplankton, algae, invading forests and drifting pollen all leave their marks in the bottom of lakes. Scientists use a variety of methods to drill down into them and pull up layers upon layers of history.

For example, by aging the layers and identifying pollen contained within them, the striped core can be transformed into a story of plants recolonizing land as the glaciers melted back. That study captured my imagination years ago, and I’ve been curious about the process of sediment coring ever since. Through a series of friends and connections, I was allowed to tag along with this crew of four female geologists for almost a full week as they took sediment cores in Kelly Lake on the Kenai Peninsula. When I interviewed Abby Boak, a Junior at Mount Holyoke College about the field work, she echoed my sentiments exactly: “During class we don’t talk about HOW they come to the conclusions. I like seeing the process of how we discover things.”

The HOW seems to be filled with odd tools, complicated procedures and dirty hands. Emmy Wrobleski—a Senior at Mount Holyoke College—used a paper towel to wipe goose poop (the crew’s nickname for the soupy mud) off the core’s housing. Annie fit the matching half of the black plastic pipe over the striped cylinder of sediments and sealed the seams and caps with bright red tape. Abby helped Ellie Broadman dismantle the rest of the coring gear so we could motor back to the landing for lunch. Ellie, who is working on her PhD in paleoecology at Northern Arizona University, had just recently taken charge of this crew.

It was incredible to watch them work as a team. For the past 10 days they’d been doing sediment cores at a remote lake accompanied by their professors, Darrell Kaufman, Scott Anderson and Al Werner. Now the guys had flown home and the girls were on their own. We did have one male on the crew—Ed Berg is a retired ecologist and geologist from the surrounding Kenai National Wildlife Refuge, and he’s friends with the girls’ professors. He offered valuable experience and local knowledge, while being perceptive enough to realize that they didn’t need him to be a loud leader. The girls shifted seamlessly between problem solving, joking, positive reinforcement and nerdy science conversations.

Ellie often had her hands full of either metal or mud, so Annie would feed her pieces of Luna Bars. Annie — her face flexing frequently from goofy grins to intense focus — seemed to thrive on problem solving and the mechanical processes of coring. “It’s fun to think about problems on your feet,” she told me, “and we get to use lots of hardware and fun toys.” Just before starting graduate school, Annie was working at an afterschool program in Oakland, California. The kids were devastated that she was leaving, even after she told them she’d be getting a Masters in Mud.

As the crew leader, Ellie checked in regularly about people’s comfort and hunger levels, delegated tasks, gave calm instructions and talked through procedures out loud so that the whole team could help guard against mistakes. Even after a long, cold, wet morning of sampling and a jostled sample, the sharpest words I heard her utter were “I need to eat something.”

“It’s hard to be in charge,” I overheard Ellie say earlier. She’d just called off their first day of sampling because the wind had come up and whitecaps tossed the coring raft dangerously. Not only would the crew be in danger of injury and seasickness, but expensive tools could be lost, the equipment broken, and the cores just would not turn out as well.

“This is the first time I’ve been the point person for coring,” she explained later. “It’s nice that Darrell, Scott and Al trust me enough to leave me in charge of their equipment. Darrell had been encouraging me to make decisions because it’s my PhD work, but it’s still different without him here.”

Different indeed. The dynamics of this female-led crew were fantastic. The is adventure felt like a combination of my childhood playing in the dirt, my experiences with high ropes challenge courses, an Outward Bound expedition and my own graduate school years. These girls deftly faced mental challenges, physical difficulties and a constant stream of odd problems with a significant level of joy. . . .all while gathering important data that will add to the picture scientists are constructing about past climate, weather, erosion and life. Science is fun when you are learning to be Masters of Mud.

Note: For more photos and explanations of their work, visit my blog. They used three types of cores and many odd tools, and all of them are looking into interesting research questions.

Emily is in Alaska for the summer! Follow the journey in this column, and see additional stories and photos on her blog: http://cablemuseum.org/connect/.

For 50 years, the Cable Natural History Museum has served to connect you to the Northwoods. Come visit us in Cable, where our new exhibit “Bee Amazed!” is open.

Online Survey Question: Since Main Street Hayward is a quarterfinalist in the 2021 America’s Main Street Contest, what do you like most about downtown Hayward?

A question about what people like about Main Street Hayward, which is a quarterfinalist in the 2021 America’s Main Street contest this year called “Road to Recovery, a contest organized by Independent We Stand.