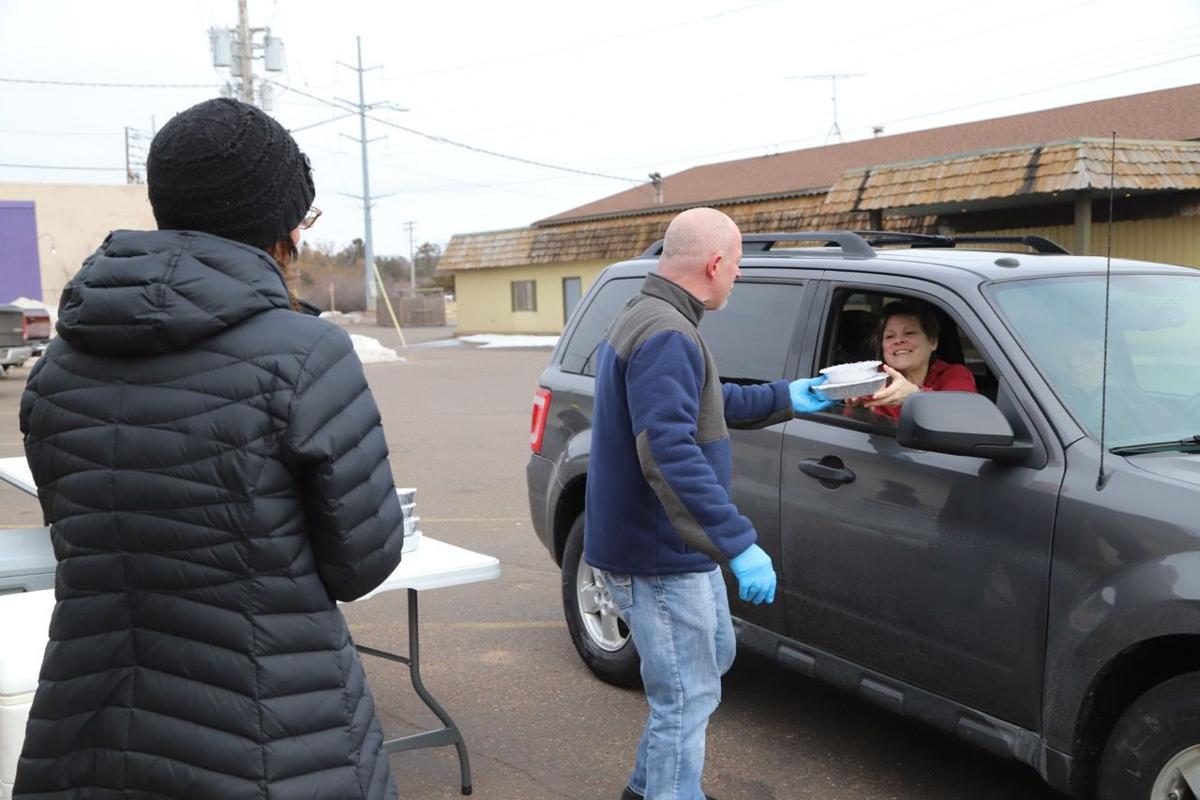 Rob Vallone, co-owner of The Birches Roadhouse in Cable, hands out a frozen meal of lasagna and rigatoni during a drive-up giveaway to area veterans and their families Sunday, March 22, at the Hayward Veterans Community Center. The restaurant, one of those currently closed due to the state-wide COVID-19 business closure order, will hold another meal giveaway Sunday, March 29, at Cable. 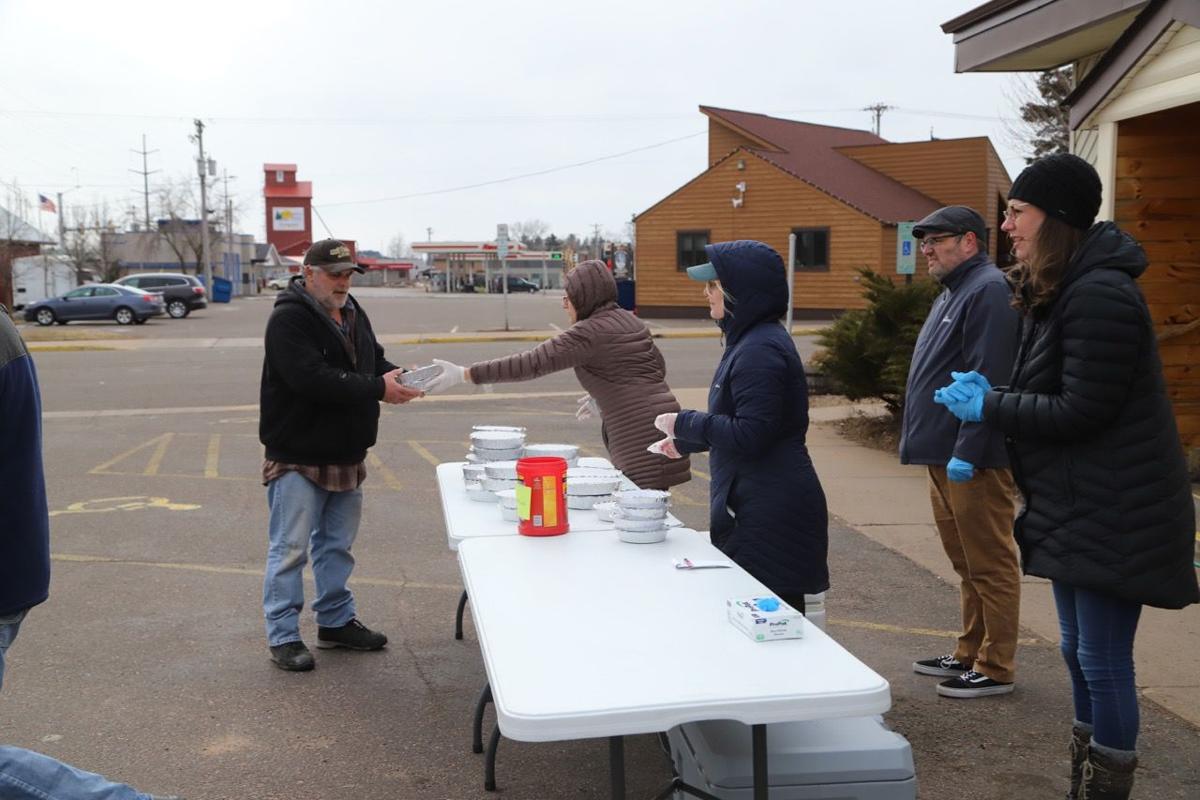 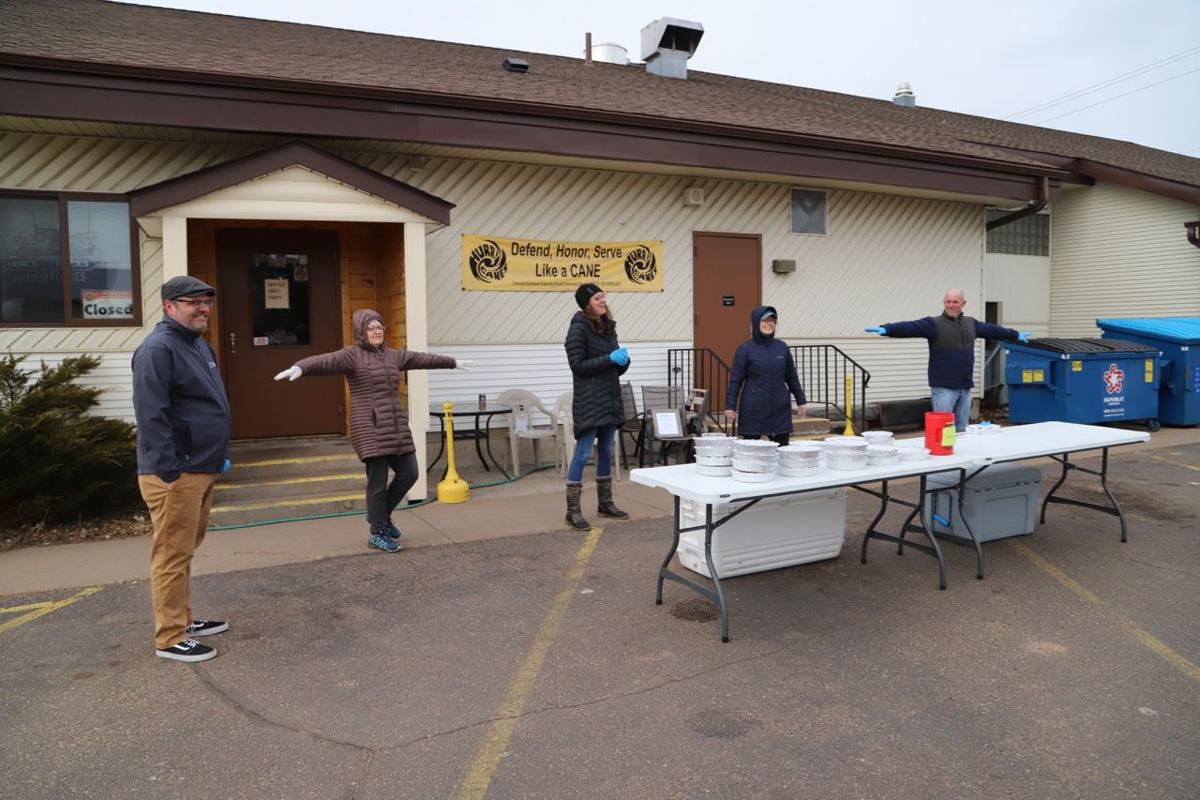 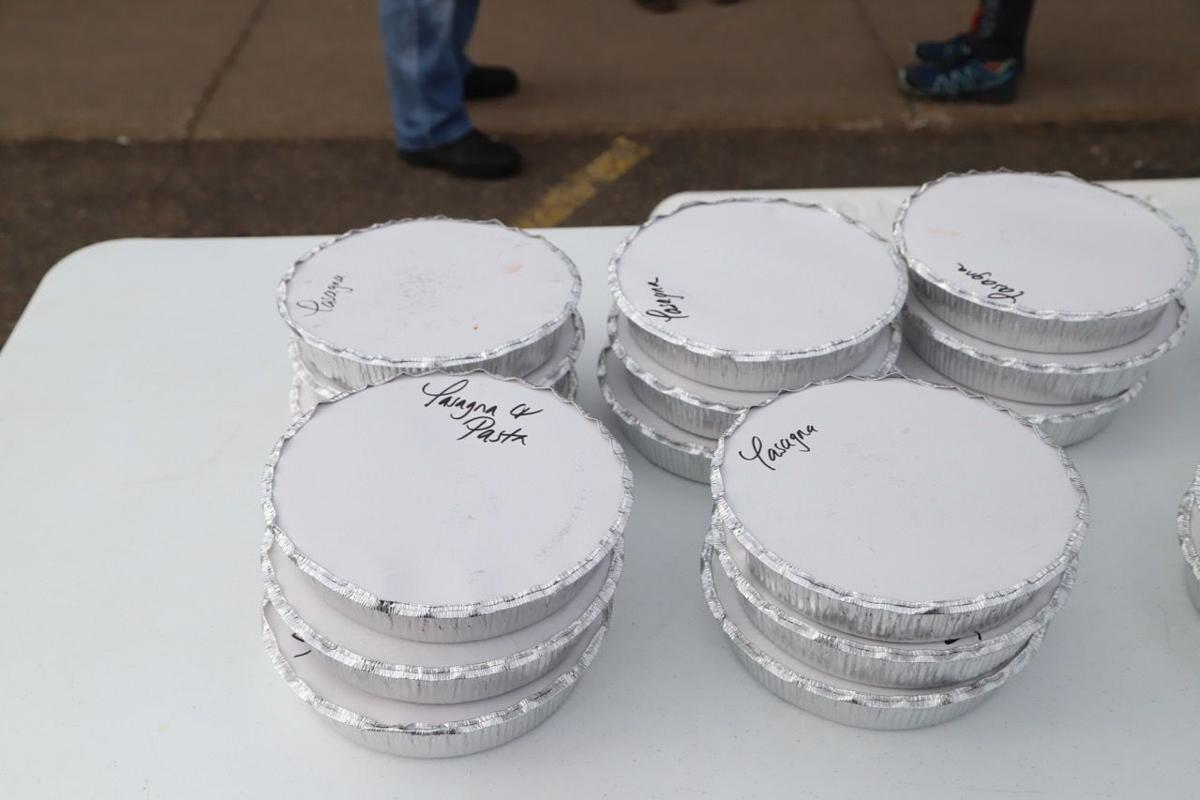 Rob Vallone, co-owner of The Birches Roadhouse in Cable, hands out a frozen meal of lasagna and rigatoni during a drive-up giveaway to area veterans and their families Sunday, March 22, at the Hayward Veterans Community Center. The restaurant, one of those currently closed due to the state-wide COVID-19 business closure order, will hold another meal giveaway Sunday, March 29, at Cable.

In a county that is a destination for its supper clubs, restaurants, wineries, bars and an unending mix of hospitality served up with good food and beverage, the COVID-19 has gone down deep and done its destruction.

Year-round, seasonal, themed, new or old, fast food, standard fare or specialty — this industry is feeling the pain at its very core and yet doing whatever they can to come through the hardship. Here’s a sample — in no particular order — of what a few of them shared with the Record.

Owner Peggy Dobbs said she stands to lose about $150,000 in sales, according to last year’s numbers from mid-March to the end of April — and that doesn’t include food loss, which is estimated at $3,000.

“We have had to cancel some major events here in March and April: The Hayward Area Chamber of Commerce Spring Gala for 200 people; SCOPE Banquet for 300 people; HCCU Annual for 220 people; Diggers Hotline for 125 people; Easter Buffet for 550 people; and all of the high school sports awards programs. Some of these events are not rescheduling,” said Dobbs.

Dobbs also said all but one hourly staff member has been laid off. Her salaried chef is still working and their take-out specials, which began March 19, are handled by Dobbs and her chef, Carl.

“The outpouring of community support, concern and well wishes has been awe inspiring,” Dobbs said.

“I have customers offering their help in any way. Some have offered to help at no expense. I feel very blessed to have the trust and support of the Hayward community.”

“We just went from a booming economy to a dead stop.” That’s how owner Billie Jo Sabin described the impact of COVID-19. Anglers, a place that has served food and drinks throughout the day and evenings right on historic Main Street since the 1930s, is reeling from the pain.

Sabin said they have had to lay off several employees who live paycheck to paycheck.

“Unemployment doesn’t cover enough for the families, so we will do everything we can to help the community and our staff get through this,” she said.

Sabin said everyone needs to take the pandemic seriously. She said they are trying to stay positive and praying this will pass soon.

Meanwhile they still have bills to pay and are doing take-out orders, she said.

“We all need to work together to see this through. Be safe and smart.”

Co-owner Tom Flavin said they had only two hours to prepare for their shutdown at the supper club, after the governor’s order to shut down restaurants and bars at 5 p.m. on Tuesday, March 17.

Flavin, who said they prepare almost all food and entrees from scratch, said,

“We start prepping here at 6 a.m. and we had corned beef boiling when we got the notice. It was very upsetting.”

Late that afternoon, Flavin had to turn away an estimated 10 couples that had come out for dinner. Flavin said he sent them home with free take-out food.

“I usually don’t freeze the steak but I will have to. Not serving it fresh — I don’t want our reputation to suffer,” he said.

Flavin and co-owner David McClain will also take heavy losses at the bar.

“We will lose all that revenue and never recover that. That pays the bills,” Flavin said.

Some of their staff will have to file for unemployment while Flavin and McClain do the work of preparing take-out food for customers who call in orders.

“I can’t imagine if this goes into summer. It makes me sick thinking of it,” said Flavin.

Dave and Kathy Mathis said they were already closed when the notice came to cease operations. Kathy said they are normally closed this time of year until the second week of April.

“We were thinking of opening on Fridays only, starting on the 4th, but now it’s wait and see,” she said.

“For us there is some loss due to spoilage but not enormous,” said Executive Chef Eric Landgraf of the Chippewa Inn, adding that the things that spoil are the produce and things that can’t freeze, like mushrooms. Proteins, he said, go in the freezers and we wait for an “All Clear” to order in the future.

“There is impact to the staff,” Landgraf said.

“We are all part-time this time of year but it still hurts and, of course, my servers don’t actually rely on their wages as income much. The lion’s share of their income comes directly from the customers themselves,” he explained, adding that at this time of year they generally serve between 20 to 50 in an evening, whereas that number goes up to 120 in the summer. He said that if this had to happen, this is the slowest time of year and they will not actually lose much in the way of revenue if it just lasts sometime into April. “Longer than that and it would take it’s toll,” he said.

Landgraf said they are not looking at doing take-out as an alternative.

“Being one of Wisconsin’s great supper clubs, our customers are looking for the total experience that dining with us brings — the Old Fashioned at the bar, the chit chat, the intimate dining and the interaction with your server. I can’t box that up.”

“As we celebrated our first anniversary on Feb. 21, Tamarack Farms Winery anticipated a strong spring business and even stronger summer sales. All that has changed for us and the world as a new normal has evolved,” said Ken Bertolini, partner of TFW.

Bertolini said their wine tastings and bottle sales for TF wines have been hugely impacted, as have their many varietal wines from around the world. They have used up their fresh goods inventory but miss the regular customers and tourists who last year consumed over 10,000 wood fired pizzas.

“We chose not to do take-out or delivery, as that, too, takes interaction and we felt that TFW must do its part to keep the virus from spreading. We are looking at a third-party delivery program for our wines and we will update the progress through our Facebook and website,” Bertolini said.

At the popular breakfast and brunch restaurant The Robin’s Nest, owner Carol Mahoney said it may see sales reduced by 15.8% based on last year’s numbers, if the shutdown goes through May.

“If it lasts through June, we stand to lose 30% of our annual revenue,” Mahoney said.

Cash flow is another problem since there are fixed expenses that must be paid each month — rent/mortgage, utilities, insurance and equipment leases, she said.

“We are fortunate that our inventory of perishables was relatively low when this was announced. We will process what we can, let our employees have what they need, and give the rest away,” Mahoney said.

The Robin’s Nest will not offer take-out meals, preferring, she said, that customers and employees stay home.

Owner Michele DeYoung said the White Stag was planning on a temporary closing in the early spring, but they were forced to shut down three weeks earlier and they do not know when they will be able to reopen.

“We gave our food to family and employees that we thought could really use it at this time. We are concerned for all of our employees as most of them rely on tips, (and) we have encouraged them to file for unemployment right away, as no one knows when we will be able to open.

DeYoung said customers have been purchasing gift cards and she encourages everyone to get take-out from the restaurants still providing that service.

“It is a tough business and we were just starting to slow for this season and the shut- down really caught us off guard,” DeYoung said.

The very day of the order to shut down restaurants, Haley and Nathan Bochler of The Ranch had decided hours earlier to close the supper club for dine-in seating and offer curbside carry out.

“We felt it was the responsible thing to do for our community and staff, and had been in touch with other friends in the industry in larger cities where it had already been enacted, so we knew it was coming down the pipeline to Hayward as well,” Haley said.

The Bochlers said they are supportive of the governor’s order but are also looking for support from both the federal and state levels for small businesses, such as theirs.

“In the meantime we are getting some projects done and doing some deep cleaning with the staff to keep hands busy and staff employed as long as possible,” Haley said, adding that the curbside delivery has been pretty quiet and they will likely close their doors.

Owners Rob and Rachel Vallone decided to distribute meals at no charge to veterans or family members and on Sunday, March 22, they gave 75 containers of food away at the Hayward Veterans Center. Frozen lasagna, rigatoni and pasta in different size containers were handed out by the Fallones, Stacey Hessel, Renee Brown and Gloria Sheehan to people who drove up in their vehicles and accepted the containers. One volunteer took containers of food to homebound veterans as well.

“As long as we can cover the expenses, we can keep it going. We’re trying to inspire other people to do that. There’s a lot of folks in need and if their supply chain starts to get thin in grocery stores, the need will go up,” said Rob.