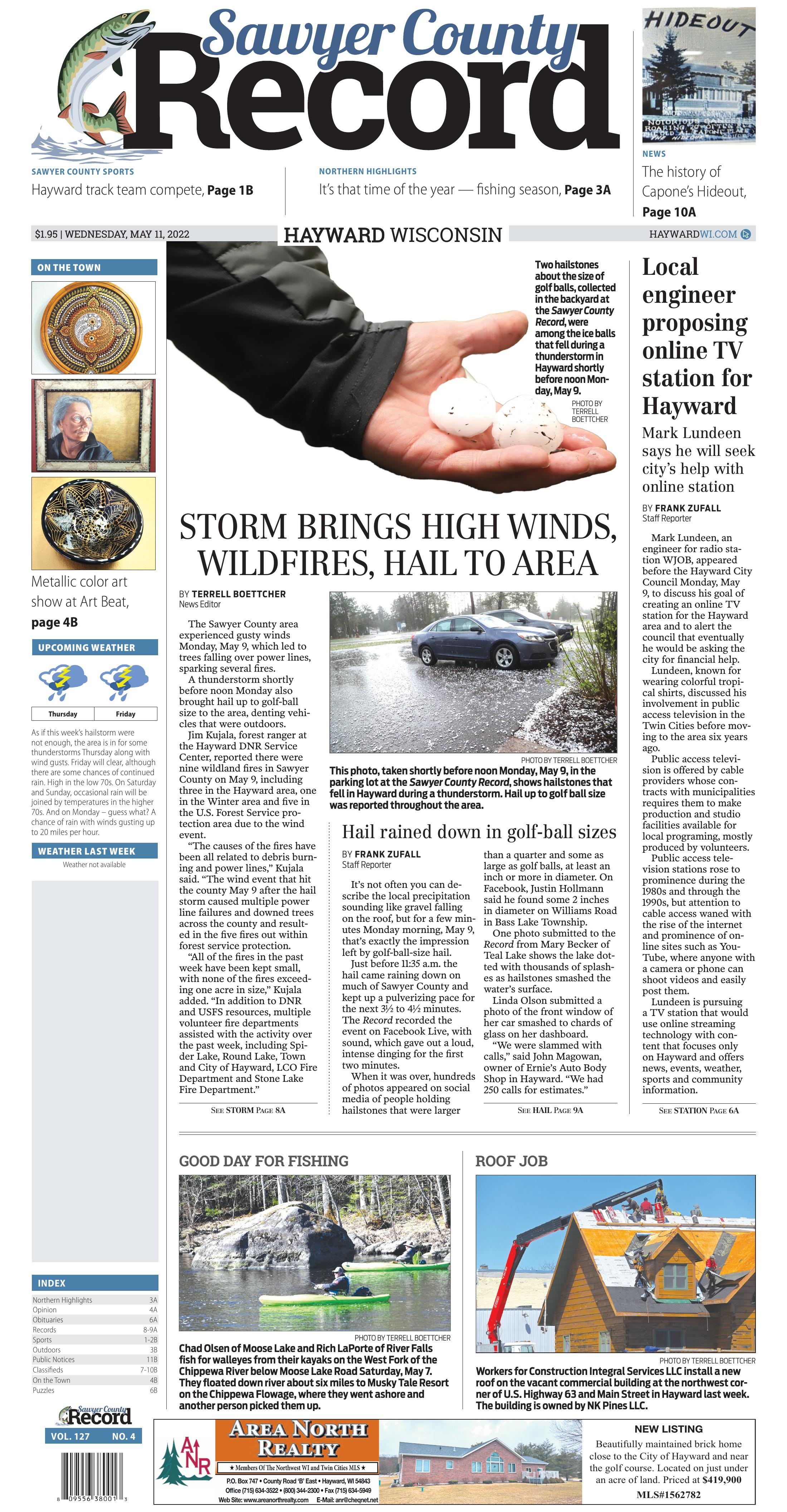 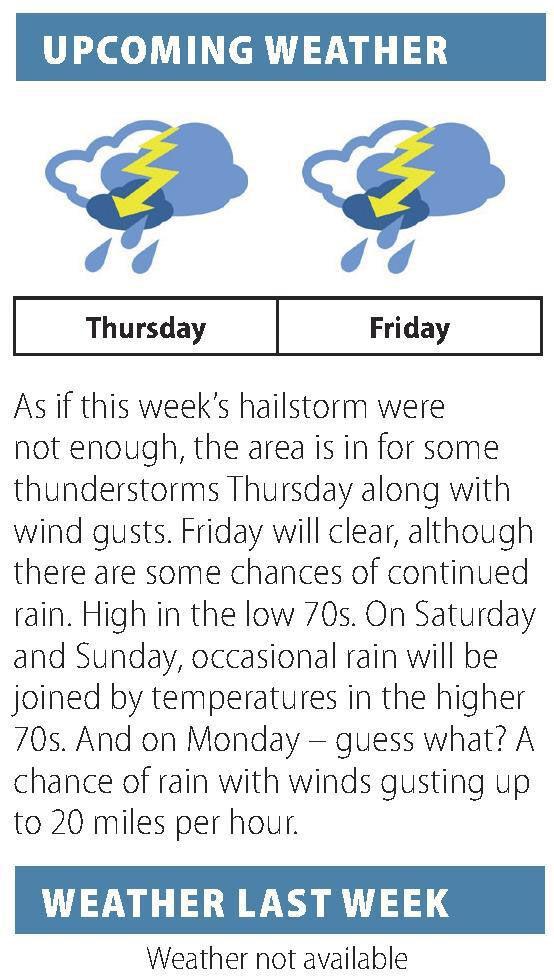 Two hailstones about the size of golf balls, collected in the backyard at the Sawyer County Record, were among the ice balls that fell during a thunderstorm in Hayward shortly before noon Monday, May 9.

This photo, taken shortly before noon Monday, May 9, in the parking lot at the Sawyer County Record, shows hailstones that fell in Hayward during a thunderstorm. Hail up to golf ball size was reported throughout the area.

A thunderstorm shortly before noon Monday also brought hail up to golf-ball size to the area, denting vehicles that were outdoors.

Jim Kujala, forest ranger at the Hayward DNR Service Center, reported there were nine wildland fires in Sawyer County on May 9, including three in the Hayward area, one in the Winter area and five in the U.S. Forest Service protection area due to the wind event.

"The causes of the fires have been all related to debris burning and power lines," Kujala said. "The wind event that hit the county May 9 after the hail storm caused multiple power line failures and downed trees across the county and resulted in the five fires out within forest service protection.

"All of the fires in the past week have been kept small, with none of the fires exceeding one acre in size," Kujala added. "In addition to DNR and USFS resources, multiple volunteer fire departments assisted with the activity over the past week, including Spider Lake, Round Lake, Town and City of Hayward, LCO Fire Department and Stone Lake Fire Department."

Fire locations on Monday included Sugarbush Lane on the north side of Big Spider Lake, Larson Road near the Teal River and Moose Lake Road east of Forest Road 320.

At 3 p.m. May 9, Hayward fire departments responded to a downed tree that was holding up a live power line that lying across a building owned by Jeff Homuth next to Lori's Card and Gift on Dakota Avenue.

At 1:46 p.m. May 9, the Hayward fire departments assisted with traffic control at a rollover crash on Washburn County Road E about one-half mile south of Highway 63.

The Washburn County Sheriff's Department reported that three occupants of the 28-foot box truck were out of the vehicle and they stated they were not injured. An ambulance stood by as a precaution.

At 1:50 a.m. Sunday, May 8, at Hayward Health Services on Nyman Avenue, staff heard a loud bang and stated there was smoke in the building. Hayward fire personnel investigated and found nothing.

At 11:30 p.m. Friday, May 6, a transformer on Haskins Road near Little Round Lake blew up and started leaves on fire.

At 2:36 p.m. Thursday, May 5, the Town of Bass Lake and Town and City of Hayward Fire Departments along with the Hayward DNR responded to a fire on Ski Hill Road off Fun Valley Road approximately four miles south of Hayward. Two hoop sheds owned by Keenan Construction were on fire and the fire spread to surrounding woodland.

The fire started from debris burning; the sheds and construction materials inside were a total loss. The wildfire encompassed 0.53 acre.

Mary Becker took a photo of the hail splashing down on Teal Lake.

It's not often you can describe the local precipitation sounding like gravel falling on the roof, but for a few minutes Monday morning, May 9, that's exactly the impression left by golf-ball-size hail.

Just before 11:35 a.m. the hail came raining down on much of Sawyer County and kept up a pulverizing pace for the next 3 1/2 to 4 1/2 minutes. The Record recorded the event on Facebook Live, with sound, which gave out a loud, intense dinging for the first two minutes.

When it was over, hundreds of photos appeared on social media of people holding hailstones that were larger than a quarter and some as large as golf balls, at least an inch or more in diameter. On Facebook, Justin Hollmann said he found some 2 inches in diameter on Williams Road in Bass Lake Township.

One photo submitted to the Record from Mary Becker of Teal Lake shows the lake dotted with thousands of splashes as hailstones smashed the water's surface.

Linda Olson submitted a photo of the front window of her car smashed to chards of glass on her dashboard.

"We were slammed with calls," said John Magowan, owner of Ernie's Auto Body Shop in Hayward. "We had 250 calls for estimates."

Magowan said most of the damage reported is just dents, but there are cases of more serious damage, like the broken windshield, or worse.

"Based on the reports I've heard the most serious damage was in the Round Lake area," he said. Officially the Duluth National Weather Station reports the area received just over 1 inch of precipitation on Monday, but what it doesn't say is that it came in the form of ice water pelting down like ball bearings.

As more details come in about the hailstorm damage, the Record will provide that information.

Mark Lundeen (right) makes a presentation to the City of Hayward Council on Monday night, May 9 about an online TV stations focusing on the Hayward Area. Listening to Lundeen are (from left) Aldermen Harold Johnson, Lonnie Kennell, Ward Willliamson and City Attorney Michael Kelsey.

Mark Lundeen, an engineer for radio station WJOB, appeared before the Hayward City Council Monday, May 9, to discuss his goal of creating an online TV station for the Hayward area and to alert the council that eventually he would be asking the city for financial help.

Lundeen, known for wearing colorful tropical shirts, discussed his involvement in public access television in the Twin Cities before moving to the area six years ago.

Public access television is offered by cable providers whose contracts with municipalities requires them to make production and studio facilities available for local programing, mostly produced by volunteers.

Public access television stations rose to prominence during the 1980s and through the 1990s, but attention to cable access waned with the rise of the internet and prominence of online sites such as YouTube, where anyone with a camera or phone can shoot videos and easily post them.

Lundeen is pursuing a TV station that would use online streaming technology with content that focuses only on Hayward and offers news, events, weather, sports and community information.

He has formed a non-profit and is now raising awareness by visiting municipalities and local marketing agencies, such as the Hayward Area Chamber of Commerce, Hayward Lakes & Visitor Convention Bureau and others.

"Everyone I've talked to said this is amazing," Lundeen said.

Lundeen said the station would help those from out of the area who have a Hayward connection to stay in touch.

"Our audience will be those people from Chicago, Madison, Minneapolis and St. Paul, who are tourists here or have a second home here and they are going to want to see what's happening in Hayward today," he said.

One of the ideas for the new online station is to place seven cameras around the Hayward area so people can see what's happening any time of day. He has discussed placing a camera at Second and Main streets with Hayward Business Improvement District ( BID) President James Netz.

Lundeen said he wants the council to be aware of the project because at some point he would be asking the city for financial support, but does not know how much.

He noted the city receives cable provider fees that are intended to help with local programing, but he also said those fees are scheduled to expire in about three years so he doesn't want to count on them. The primary source of funds, he said, probably would be grants.

Another source of income, Lundeen said, would be advertising.

"Having a community station is just so much easier now because of what the internet provides," he said.

With a grant from the state, Lundeen has rented the front of a building off Highway 63 where the once occupied by the Sawyer County Record. If more funds become available, he intends to rent the back of the building this June to use as a studio.

Kristy Maki of the American Birkebeiner Ski Foundation (ABSF), which manages the Lumberjack World Championships (LWC), updated the council on the July 28-30 competition which, this year, also will include a performance by comedian Charlie Berens on July 17.

She said the new, handicap-accessible bleachers would be installed beginning May 16 at the Lumberjack Bowl.

Maki requested a banner across Main Street in early July, and as in years past, she asked for handicap parking to be allowed along the biking and walking path just outside the Lumberjack Bowl and nearby city spaces to be used for volunteer parking.

She also noted that this year's Lumberjack Run would start at 8 a.m. Saturday, July 30.

The council approved all of Maki's request.

Mayor Charlie Munich thanked St. Joseph Catholic Church for its $2,500 donation to be used in the Public Works Department.

The council approved a request by the Hayward Civic Club to have a fireworks display on July 4 and a display banner over Main Street from June 27 to July 5.

Matt Ostrander was appointed as the city's representative to the Weiss Community Library Board.

The council approved taking bids for blacktopping of Wheeler Street and Bay Avenue, and with funds available in the public works budget, Munich said, the city also will take bids to seal coat various city streets.

The council approved raising the pay for the person watering Main Street plants from $13 an hour to $18 to attract a person to take the job. The city had been unable to attract a worker for $13 an hour.

Albarado, who previously had been a coordinator for Rusk County, said he had much experience working in county government and interacting with the City of Ladysmith.

"So I've worked closely with the City of Ladysmith all those years," he said, "and I've been through the good times between councils and boards and the bad times, and sometimes when they don't agree the staff has to figure out how to get things done."

Albarado also updated the council on construction of the second courthouse to be built between the existing courthouse and the sheriff's office. Work will begin May 16, and a brief groundbreaking ceremony will be held at 5:30 p.m. Thursday, May 19, before the County Board meeting.

Chad Olsen of Moose Lake and Rich LaPorte of River Falls fish for walleyes from their kayaks on the West Fork of the Chippewa River below Moose Lake Road Saturday, May 7. They floated down river about six miles to Musky Tale Resort on the Chippewa Flowage, where they went ashore and another person picked them up.

Workers for Construction Integral Services LLC install a new roof on the vacant commercial building at the northwest corner of U.S. Highway 63 and Main Street in Hayward last week. The building is owned by NK Pines LLC.