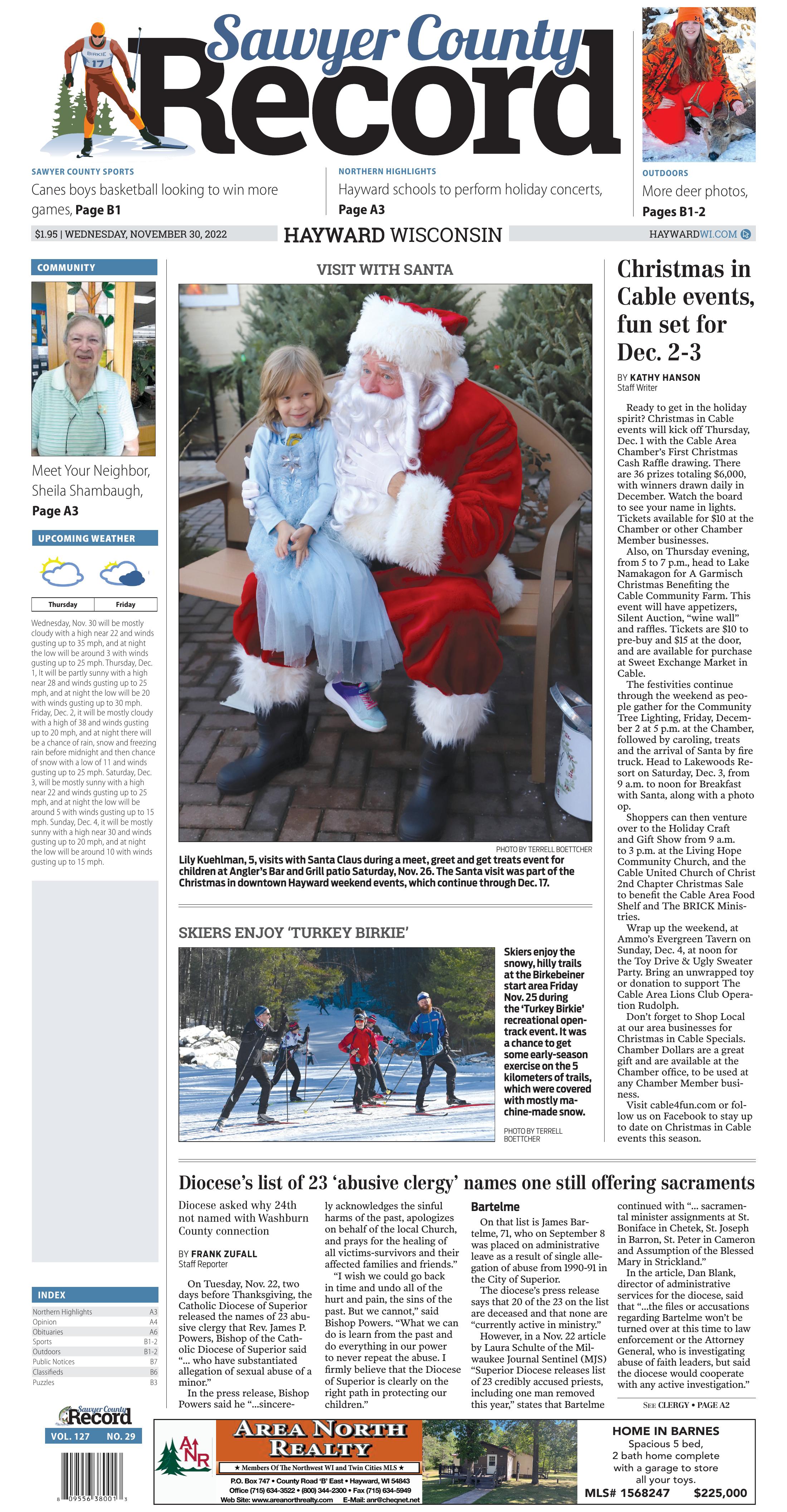 Lily Kuehlman, 5, visits with Santa Claus during a meet, greet and get treats event for children at Angler's Bar and Grill patio Saturday, Nov. 26. The Santa visit was part of the Christmas in downtown Hayward weekend events, which continue through Dec. 17.

Skiers enjoy the snowy, hilly trails at the Birkebeiner start area Friday Nov. 25 during the 'Turkey Birkie' recreational opentrack event. It was a chance to get some early-season exercise on the 5 kilometers of trails, which were covered with mostly machine-made snow.

Ready to get in the holiday spirit? Christmas in Cable events will kick off Thursday, Dec. 1 with the Cable Area Chamber's First Christmas Cash Raffle drawing. There are 36 prizes totaling $6,000, with winners drawn daily in December. Watch the board to see your name in lights. Tickets available for $10 at the Chamber or other Chamber Member businesses.

Also, on Thursday evening, from 5 to 7 p.m., head to Lake Namakagon for A Garmisch Christmas Benefiting the Cable Community Farm. This event will have appetizers, Silent Auction, "wine wall" and raffles. Tickets are $10 to pre-buy and $15 at the door, and are available for purchase at Sweet Exchange Market in Cable.

The festivities continue through the weekend as people gather for the Community Tree Lighting, Friday, December 2 at 5 p.m. at the Chamber, followed by caroling, treats and the arrival of Santa by fire truck. Head to Lakewoods Resort on Saturday, Dec. 3, from 9 a.m. to noon for Breakfast with Santa, along with a photo op.

Shoppers can then venture over to the Holiday Craft and Gift Show from 9 a.m. to 3 p.m. at the Living Hope Community Church, and the Cable United Church of Christ 2nd Chapter Christmas Sale to benefit the Cable Area Food Shelf and The BRICK Ministries.

Wrap up the weekend, at Ammo's Evergreen Tavern on Sunday, Dec. 4, at noon for the Toy Drive & Ugly Sweater Party. Bring an unwrapped toy or donation to support The Cable Area Lions Club Operation Rudolph.

Don't forget to Shop Local at our area businesses for Christmas in Cable Specials. Chamber Dollars are a great gift and are available at the Chamber office, to be used at any Chamber Member business.

Visit cable4fun.com or follow us on Facebook to stay up to date on Christmas in Cable events this season.

In the press release, Bishop Powers said he "...sincerely acknowledges the sinful harms of the past, apologizes on behalf of the local Church, and prays for the healing of all victims-survivors and their affected families and friends."

"I wish we could go back in time and undo all of the hurt and pain, the sins of the past. But we cannot," said Bishop Powers. "What we can do is learn from the past and do everything in our power to never repeat the abuse. I firmly believe that the Diocese of Superior is clearly on the right path in protecting our children."

On that list is James Bartelme, 71, who on September 8 was placed on administrative leave as a result of single allegation of abuse from 1990-91 in the City of Superior.

The diocese's press release says that 20 of the 23 on the list are deceased and that none are "currently active in ministry."

However, in a Nov. 22 article by Laura Schulte of the Milwaukee Journal Sentinel (MJS) "Superior Diocese releases list of 23 credibly accused priests, including one man removed this year," states that Bartelme continued with "... sacramental minister assignments at St. Boniface in Chetek, St. Joseph in Barron, St. Peter in Cameron and Assumption of the Blessed Mary in Strickland."

In the article, Dan Blank, director of administrative services for the diocese, said that "...the files or accusations regarding Bartelme won't be turned over at this time to law enforcement or the Attorney General, who is investigating abuse of faith leaders, but said the diocese would cooperate with any active investigation."

The Record asked Blank if Bartelme is still offering sacraments but he was not able to respond by press time.

According to the press release, the list of names is the "... result of three separate clergy file reviews, including one by a private independent security consulting firm, more than a year of meetings, multiple sessions with the Diocesan Review Board (lay people with various life experiences), and much prayer and discernment."

The list also includes the names of priest who were not directly assigned to the Diocese of Superior but were serving in the region of the diocese under the Congregation of the Missionaries of the Precious Blood (CPPS), the Missionary Oblates of Mary Immaculate (OMI) and the Institute of Christ the King Sovereign Priest (ICKSP).

In 2013, the nearby Diocese of Duluth produced a list of 17 expriest that it also called "credibly accused of abuse."

The Record emailed Blank why former priest James Steel, Wheeling, Illinois of the Diocese of Chicago who was accused of sexual assault of then 12-yearold Robert Brancato in 1983 at a cottage on Long Lake, Town of Birchwood, Washburn County was also not named on the list.

"While we are confident in our records and investigation, we are not perfect," said Blank.

A November 2006 Archdiocese of Chicago investigation of Steel determined "...there is reasonable cause to suspect that the alleged misconduct occurred." Brancato was the recipient of a large lawsuit settlement with the Diocese of Chicago, but in 2014, at age 45, he also wanted the Washburn County District Attorney to press charges against Steel and former Catholic school administrator Donald Ryniecki whom he accused both of assaulting him at Ryniecki's summer cottage on Long Lake.

The statute of limitations in Illinois prevented criminal charges against Steel and Ryniecki in Illinois but Wisconsin's "tolling" doctrine that states when an accused leaves the state the statute of limitation clock stops running allowed prosecution 32 years later, but Washburn County District Attorney (DA) Tom Frost, after a sheriff investigation, said he did not believe there was enough evidence to secure a conviction and added that a payment by the Diocese of Chicago couldn't be used as evidence in a criminal case.

Of the 23 named, Thomas Edward Ericksen, former priest of St. Peter's in Winter, is the most well known.

In Sept. 26, 2019, Ericksen was sentenced to 30 years in prison for two counts of sexual assault of boys in the Village of Winter from the 1980s.

After the sentencing, the Record found that in 1983 Ericksen had been questioned by the Sawyer County Sheriff's Office and under integration confused to one assault and even signed a statement admitting the offense, but Ericksen was not charged and was subsequently released to the Diocese of Superior.

In 1989, the diocese settled a lawsuit with two of Ericksen's victims for $3 million, but he was still not charged with a criminal offense.

In 2010, the Sawyer County Sheriff's Office opened an investigation into Ericksen alleged violations but in that same year Ericksen moved to Indonesia and was off the radar of local law enforcement.

In a Dec. 1, 2014 interview with Minnesota Public Radio (MPR), Ericksen admitted to the abuse but stated he didn't know it was wrong until he had received therapy.

Because he had moved out of Wisconsin shortly after the offenses, Ericksen was also eligible under the tolling doctrine to be charged decades later.

In 2014, then Sawyer County Sheriff Mark Kelsey said the case was still open.

Finally in 2018 charges were brought against Erickson.

At the Sept. 26, 2019 sentencing, Sawyer County DA Bruce Poquette was asked why it had taken so long to prosecute Ericksen and Poquette said he would not provide a response until all appeals had been made.

However, the Assistant DA Aaron Marcoux told the Record at the sentencing that after he had been given the case that Ericksen had been charged within a week and extradited from Minnesota.

There are multiple allega against Augustyn.

A June 11, 1992 article in the Spooner Advocate, "Suit alleges priest abused boy," cites a civil lawsuit seeking $1 million in damages by a Spooner man for abuse suffered 30 years earlier by the priest at St. Joseph's Catholic Church in Shell Lake.

"The suit alleges that 'During the late 1950's and early 1960's Father Augustyn, while purporting to engage in spiritual instruction and counseling, would invite parish boys to his rectory room, instruct the boys on sexuality and then sexually assault the boys."

The lawsuit accused the Diocese of Superior for being "negligent in not removing the priest from his position."

The lawsuit against the diocese was dismissed because of statute of limitations with no payments made by the diocese.

Richard J. Herrmann was not priest assigned to the diocese ut worked inside it in several ocations including Spooner nd Trego.

He is also listed as "credibly accused" by the Diocese of La Crosse.

In June 28, 1996 article "Rudolph priest to retire" by the Daily Tribune, Wisconsin Rapids, reads: "For 20 years, he was on loan to the Diocese of Superior where he started several mission churches. He still goes back to Cumberland, Sugar Camp and Boulder Junction to visit friends he made during that time."

The timeframe of Telegdy's abuse includes 1961-62 in Rib Lake and from 1962-66 in Park Falls and "multiple dates in other diocese."

The Diocese of Davenport also cites abuse of three boys by Telegdy starting in the 1950s.

Others named include the following:

Theodore Ahrens: accused of multiple allegations in the early 1960s in Hurley.

Donald Drummer, OMI: accused of abuse in 1986 in River Falls and also accused by the Archdiocese of St. Paul-Minneapolis.

Augustine Hanchak, CPPS: local abuse from 1976-1984 around Sanborn, Highbridge and Mason. Accused by the Diocese of Dodge City, Kansas.