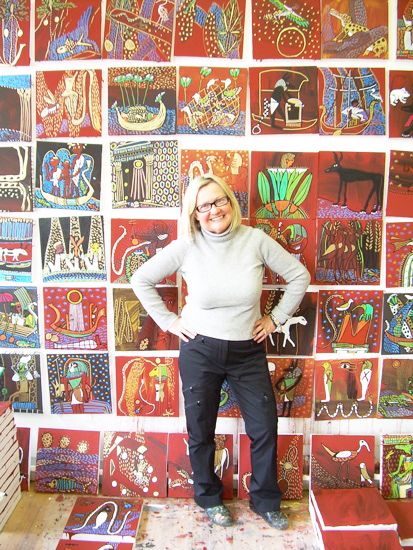 Imaginary hieroglyphics inspired by Adu Gindy’s love of Egyptian art is part of the body of work hung in “Celebrating the Mysteries,” an exhibit that opens Jan. 3 at the Drummond Public Library. 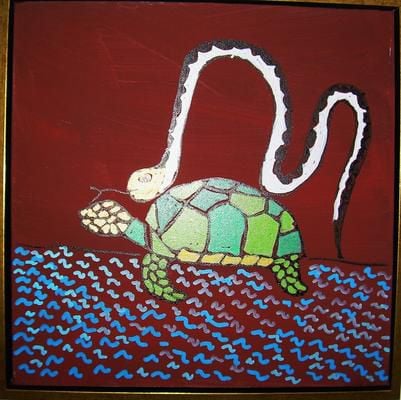 Imaginary hieroglyphics inspired by Adu Gindy’s love of Egyptian art is part of the body of work hung in “Celebrating the Mysteries,” an exhibit that opens Jan. 3 at the Drummond Public Library.

“Celebrating the Mysteries,” a powerful show of small and colorful images, will open Jan. 3 at the Drummond Public Library.

An opening ceremony will be held from 4 to 6 p.m., with artist Adu Gindy, now living in the Hayward area, describing what led her to create hundreds of small paintings. There will be time for questions and informal conversation with the artist during the late afternoon event.

Gindy’s journey as an artist is marked with twists and turns that inform her work. “Nothing gets destroyed, it just gets changed,” she says when talking about the death in 2007 of her first husband, Kamal, for whom she began creating her unique project.

One-third of the hundreds of 12-by-12-inch canvases, hung in a grid style of Egyptian tomb paintings, will appear in the Drummond Library Show. The paintings feature animals, bugs, gods and people, all vying for attention in windows to some other existence to which Kamal, in his afterlife, or us in our imaginations, may travel.

Gindy was born in Pärnu, Estonia, and following six years in post-war relocation camps in Germany, emigrated with her mother to the United States in 1950. She earned her B.A. from Vassar, her master’s from Columbia Teacher’s College (Columbia University), and attended classes at the Art Students League in New York City, The Silvermine School of Art in New Canaan, Conn. and the Skowhegan School of Painting and Sculpture in Skowhegan, Maine, prior to earning a master’s in fine arts from the University of Minnesota in 1989.

Her work is in museum collections in Sweden, Cuba and throughout the Upper Midwest region’s art centers. She has gallery affiliations in Chicago, Duluth and the Twin Cities. She taught in the art and design department at the University of Minnesota-Duluth until her retirement.

Celebrating the Mysteries will be on display through Feb. 28 at the Drummond

Online Poll Question: Do you plan to use sunscreen this summer?

A question about the use of sunscreen this summer.