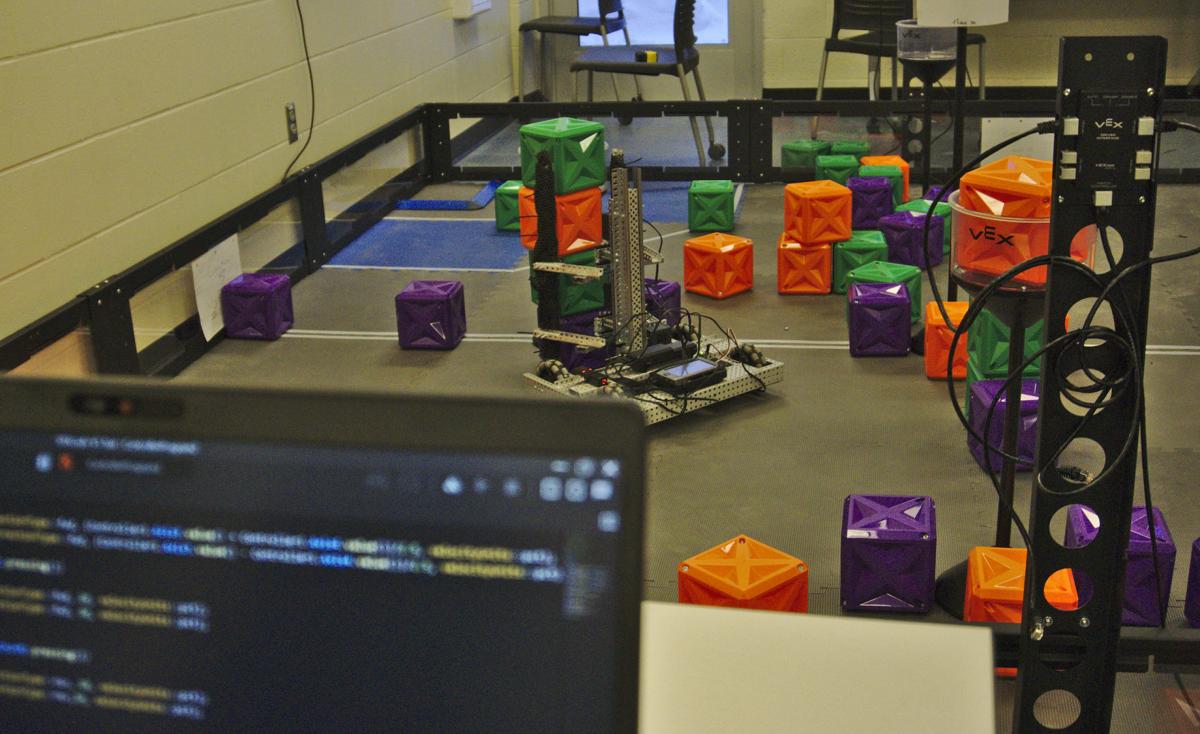 Robots like Team Circuit Breaker’s bot learn how to handle a stack of four blocks through code that students learn and write. 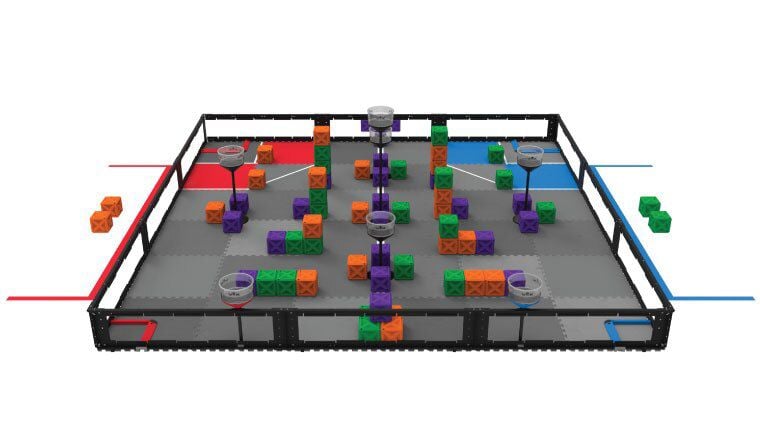 This is the arena and starting block layout. Robots try to put cubes in baskets and stack cubes into the small scoring goals in each corner. 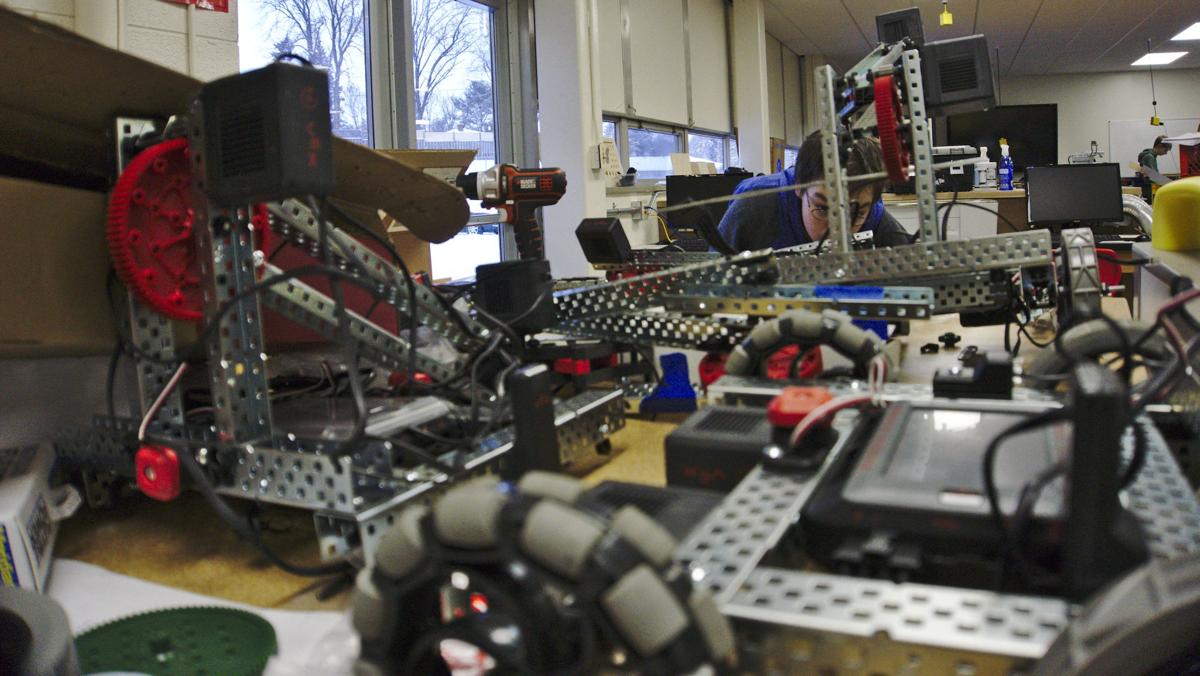 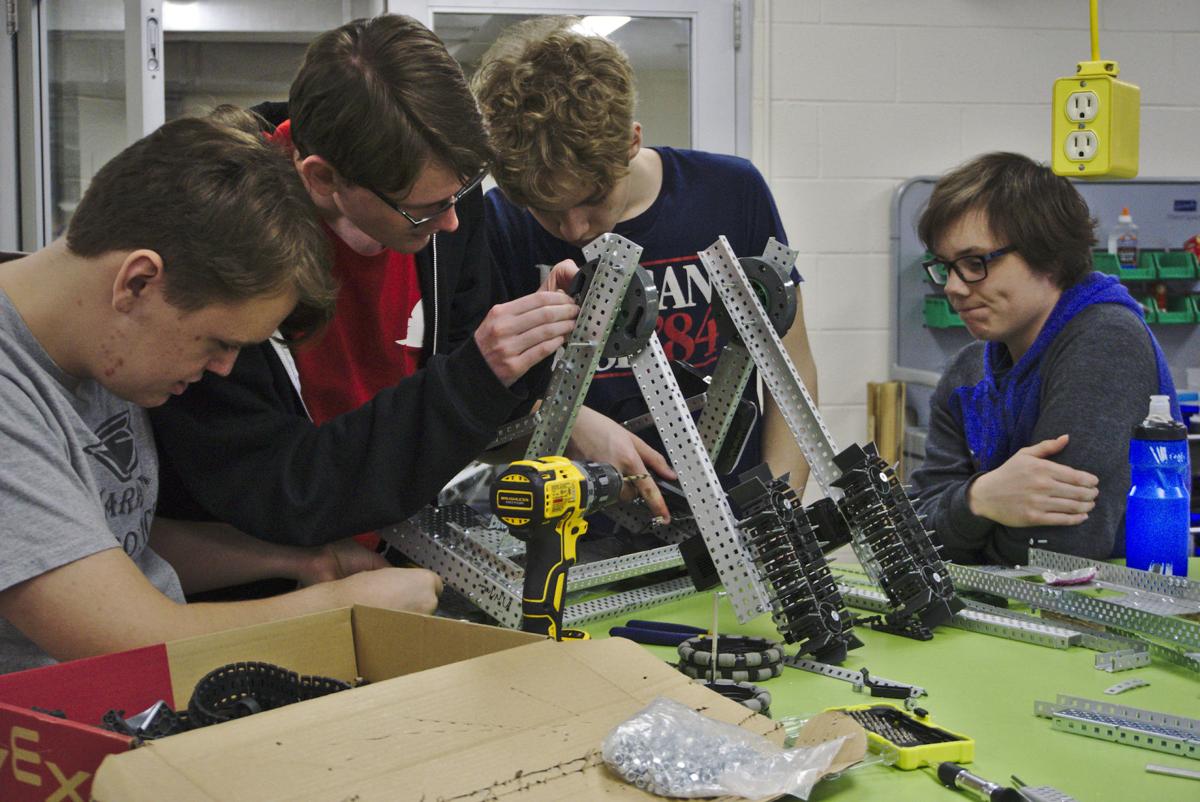 The HAL-9000 team works on their robot in January,  before the second tournament and their Excellence Award. 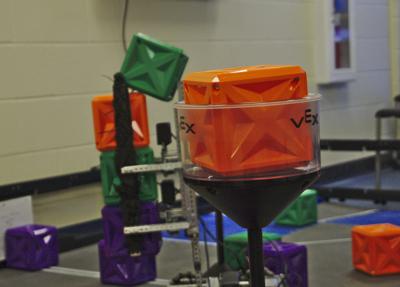 Robots like Team Circuit Breaker’s bot learn how to handle a stack of four blocks through code that students learn and write.

This is the arena and starting block layout. Robots try to put cubes in baskets and stack cubes into the small scoring goals in each corner.

The HAL-9000 team works on their robot in January,  before the second tournament and their Excellence Award.

The Warrior Robotics Club’s  four teams waited in their corners, the drivers’ controllers wired in, waiting for “go.”

The teams have designed, built, wired and programed their own robots to battle against regional schools for bids to the state tournament as part of the VEX Robotics Competition that culminates in a World’s Tournament in the spring.

Team Circuit Breaker has already made state and has been tweaking its claw bot’s programming to run more smoothly.

Team Vortex heat sealed their team name and roster onto the backs of their Warrior Robotics hoodies.

Each 2-minute heat starts with a 15 second autonomous portion (a hands-off, pre-programed autopilot), and HAL-9000 is able to consistently place an orange block into the goal area.

A motor cord on Lukey Pooh J. Jr.’s bot became caught in its treads, and the team was disqualified for touching the bot. After untangling the bot, and the team pushed a block in for pride’s sake.

Vortex was able to cradle an orange block in its two-arm lifter and drop it into a tower.

Circuit Breaker’s bot clamped on four blocks at once, but the pressure was uneven and the structure was prone to collapse.

At that point, there were 2 days until the last tournament to qualify for state, and some were as precarious as the fourth block on a rocking stack.

VEX Robotics’ competitions are more focused on creation and cooperation than mayhem and sparks like in “BattleBots,” the TV show where robots flip, hit and chop each other in an arena stocked with mallets and floor saws.

The specific challenge changes annually, and this year schools from around the world are competing in Tower Takeover, a game of grabbing, stacking and scoring half-pound, plastic blocks.

During competition, two teams are paired together to form an alliance, either red or blue, and then face another alliance in a stack-off.

The square arena has 66 blocks distributed evenly by green, orange and purple that teams try to get in their goal area or in one of seven baskets, which makes each block of the corresponding color in any goal zone worth one additional point. For example, one orange block in the goal zone is one point, but add two orange blocks in baskets, and it becomes three points.

The patterns and stacks are reset exactly the same for each game, which is important, because it allows teams to program four autonomous procedures into their robot’s computer (or brain), each corresponding to a different starting corner.

The course lay out allows a second program to be a reflection of the first as the team changes from red to blue, and the gyroscopes’ 270 degrees becomes 90 degrees.

Winners of the autonomous round earn two bonus blocks that can often be the difference between a win or a loss.

The ideal robot is one that can transport and stack blocks into a small goal area as quickly and efficiently as possible.

“[The students], have been working very hard since October in building and rebuilding their robots and made huge improvements in both their mechanical robots and programming skills during that time,” Jeremy “Pete” Peterson, Fab Lab instructor, said.

Though already qualified for state, Team Circuit Breaker wants to improve on its first-round playoff loss.

Brett Kucko said he likes new people at events, but that he also likes the competitive spirit of the robot sport.

Mya Pederson tweaked the autonomous programing and tested the results in the arena. The bot grabbed a stack of four blocks, but had trouble getting back to the goal area and releasing the blocks so they don’t topple.

Code was re-strung with slight changes in timing, strength, raising, rolling or speed. Another run, and the bot scored three out of the four blocks.

After the bot switched sides, it’s claw grasped for nonexistent blocks and dodged invisible towers. One trial ended with it spinning uncontrollably and knocking a block into the scoring area for one point.

Team Vortex’s work table is cluttered with tool boxes, tools, tupperware full of screws, backpacks, a precalculus book and the robotics engineering handbook that all teams must use as a sort-of scrapbook to document their robotics process.

Sometimes that process requires ingenuity, like at the first tournament when the team of freshmen found their bot didn’t meet the strict 18x18x18 inch size parameters, so they took a hack saw to two gears protruding from the bot’s superstructure.

Tangerine Paradise explained that Vortex’s number one goal is to not tip this time. The number two goal is state.

To mitigate tipping, the team moved the front wheels forward, which required a new chain driven system to power the treads that pull blocks into the tray.

There are three basic types of robot: suckers, stackers and claws.

Braden Richter termed himself a builder. He said he grew up on a farm and is handy with putting stuff together.

Each team divided duties of designing, building, programing, and record keeping among its members, but just getting a dose of engineering may not only generate interest in a challenging career, but result in a higher income.

A Pew Research Center analysis of U.S. Census Bureau data from 1990 to 2016 found that people who had majored in a STEM field earned 25% more than those who majored in a non-STEM field.

The analysis concluded that even STEM majors who took jobs in unrelated fields earned an average $11,000 more than their non-STEM majors counterparts.

HAL-9000’s robot doesn’t have a red eye or do karaoke, but it’s intake treads have been improved and it’s cube carrying capacity was expanded.

Despite finishing nearly dead last the previous year, they’re still the team with the most robotics experience.

Team Lukey Pooh J. Jr. is comprised mostly of seniors and has taken over a separate workspace where a speaker plays Cat Stevens, Johnny Cash, the Beach Boys.

Team Lukey Pooh J. Jr. is comprised mostly of seniors and had taken over a separate workspace where a speaker played Cat Stevens, Johnny Cash, the Beach Boys.

The Lukey Pooh J. Jr. robot was going to be a whole new bot going into the second competition. New body, new brain. The team had seven-block-high hopes.

The programing should be better too, as the previous coding was done in true senior fashion: on the bus to the tournament.

The “Star Wars” Cantina Band song came on and Steve Adams, high school math teacher and robotics aid, said, “Who doesn’t know this song?” and joined the extraterrestrial jazz by playing an electric grinder against a girder.

“Star Wars” and other mainstream sci-fi has helped push interest into STEAM professions, and fanciful inventions on the big screen have become profitable realities, and futures far, far away have begun to appear less so.

The push to get students involved in science, technology, engineering, art and math is everywhere from “Sesame Street” to your local school’s Fabrication Lab.

But before career opportunities, there was the next tournament.

Adams said that the first tournament’s competition inspired new designs and added focus to the teams, three of which had been competing for the first time, and against  seniors who have been constructing bots since 6th grade.

Warriors Robotics came back from their second tournament on Feb. 1 with two more teams on their way to state.

HAL-9000 rose like a mechanical phoenix and won the Excellence Award, which is given to the best overall performing robot at a tournament.

Peterson said it was, “[A] huge success and a great honor. It is a great example of a group of resilient students who used early failures as learning experiences.”

The team plans on preparing for state by adjusting the intake treads and programing automated commands to lift and release blocks at predesignated heights at the push of a button.

Team Vortex finished the tourney on the second place team, losing in the finals when their bot was pinned against the wall by an opposing bot.

The competition was more intense and had an influx of intimidating stacker bots, but good alliance mates helped in their run to state.

The team plans on upgrading their autonomous program to score more points.

Fortunately, the team was already state qualified from the first tournament.

The bot’s one claw is being modified into three claws to improve dexterity, and more tedious programming adjustments will be applied and tested.

Team Lukey Pooh J. Jr. had more success out of the arena than in it.

They won the Judge’s Award for the second time, impressing with a combination of interview answers to questions designed to either throw teams off or gauge team participation, and their robotics engineering handbook, meticulously kept by Emma.

Questions included, “What is your favorite color block?” and “What kind of Star Wars droid would your robot be?”

For the record, Lukey Pooh J. Jr. is a trash-collecting gonk droid.

The team still has a chance at state and is on the bubble for an at-large bid.

After this year, most of the team will be at college, but Emma and Byron Baker will return as seniors.

Byron said that next year a more quickly built robot would allow him to program a better autonomous program (i.e. not on the bus), which makes a difference if you miss out on state by only two blocks.

Warrior Robotics will charge their batteries and take their bots, hopes and hacksaws to the state tournament in Appleton less than 10 days away.

No matter the outcome, the STEAM learning, team building, competition and connection experiences will stick with them through high school, college, careers and far, far into life.