License sales and harvest numbers for gun deer season are both up over last year’s numbers, according to data from the Wisconsin Department of Natural Resources released on Tuesday.

Figures show that the number of hunters that have taken to the woods this year has increased over 2019 and 2018. Sales for all deer licenses are up 3.5% over 2019. Through Nov. 29, sales for gun, bow, crossbow, sports and patron licenses have exceeded 820,000, with more than 569,000 specifically for gun privileges.

The largest increased demographic is females, as the number of female hunters rose 12% to more than 92,000 license sales. The one decrease in sales was for non-resident licenses, likely due to the COVID-19 pandemic.

Final figures will be provided by the DNR in January.

The muzzleloader season began Monday and runs through Dec. 9. There is also a three-day state-wide antlerless-only season from Dec. 10-13. 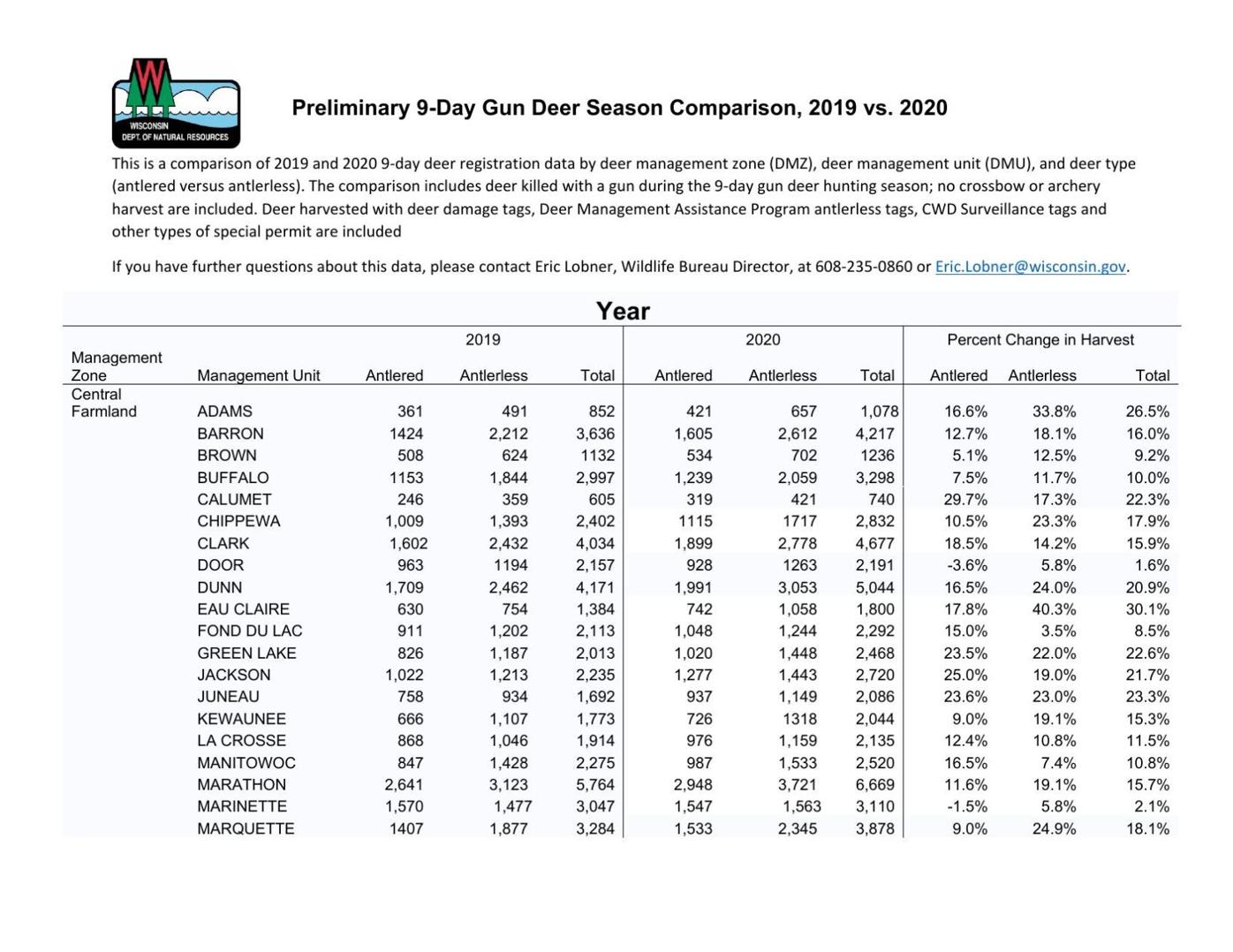 Deer harvest totals for the year exceeded 2019 numbers, but remain behind 2018 data. That year saw the highest harvest numbers since 2013.

Locally, Barron County hunters registered 4,217 deer this gun season, with 1,605 of those being bucks. Total harvest was up 16%, from 3,636, in Barron County over the year prior.

The DNR reported that nine hunting incidents and one fatality occurred during the nine-day season. On average over the past 10 years, Wisconsin has had about seven hunting incidents. Four of the incidents were related to deer drives.

A Door County 65-year-old male was killed when he tripped exiting his blind and his gun was discharged into his chest.

As additional hunting seasons continue, the DNR reminds hunters to treat every firearm as if it’s loaded, always point the muzzle in a safe direction, be certain of your target and keep your finger on the outside of the trigger guard until it is safe to shoot.

Hunters can provide samples by using self-service testing kiosks located throughout the county and state.

In Rice Lake a CWD self-service kiosk is located at the intersection of Augusta Street and 19th Avenue. There are also self-service kiosks at the DNR Service Center in Cumberland, the town of Barron Shop, Almena Meat Company in Almena, and Cenex Station in Weyerhaeuser. Visit dnr.wisconsin.gov/topic/WildlifeHabitat/registersample.html for more information on how take a sample of your deer for CWD sampling.

The DNR’s Deer Hunter Wildlife Survey is ongoing until all deer seasons end. Hunters are asked to submit a report of what they observed while hunting this gun deer season, including dates, hours in the woods, location, weather and animals encountered.

The information is used to estimate deer populations in the state. The survey can be found by visiting dnr.wisconsin.gov/topic/WildlifeHabitat/wlsurvey.html.