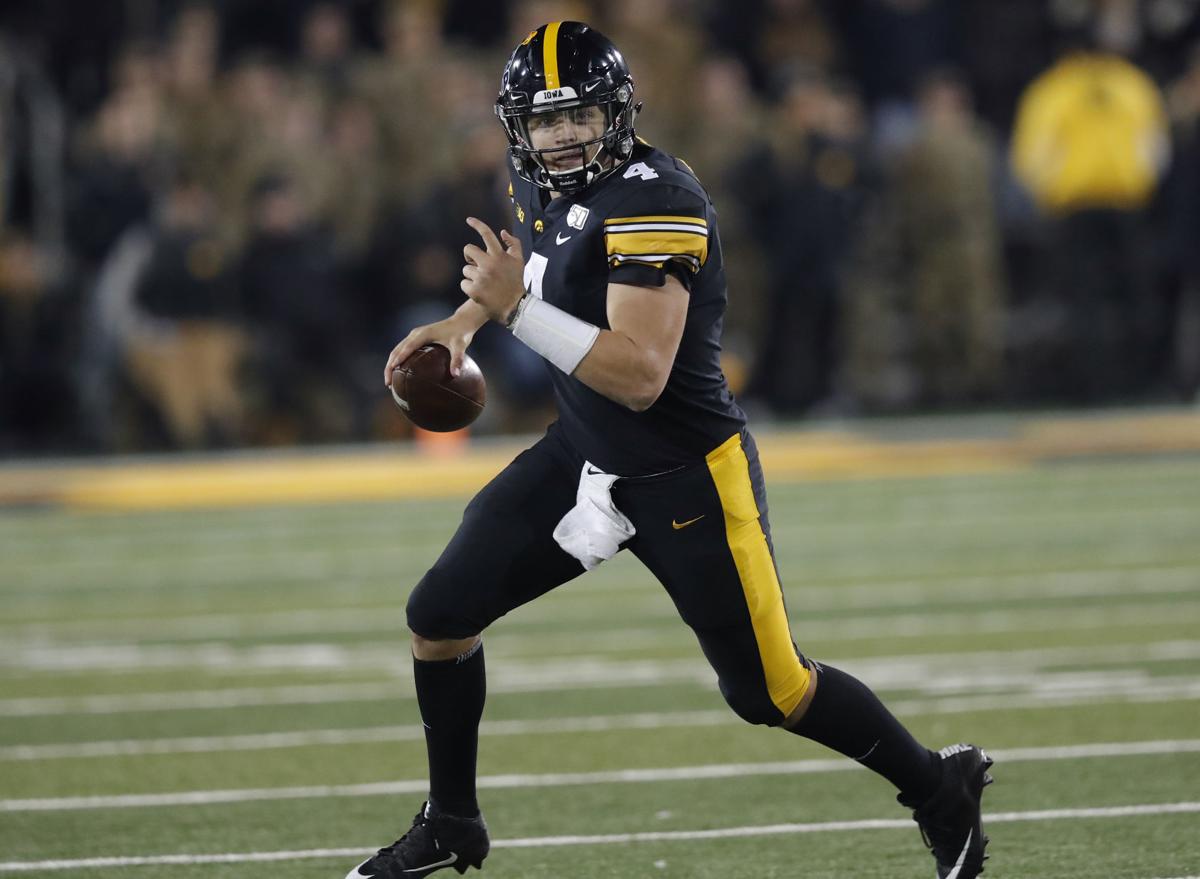 Iowa quarterback Nate Stanley runs the ball during the second half against Minnesota on Nov. 16, 2019 in Iowa City, Iowa. 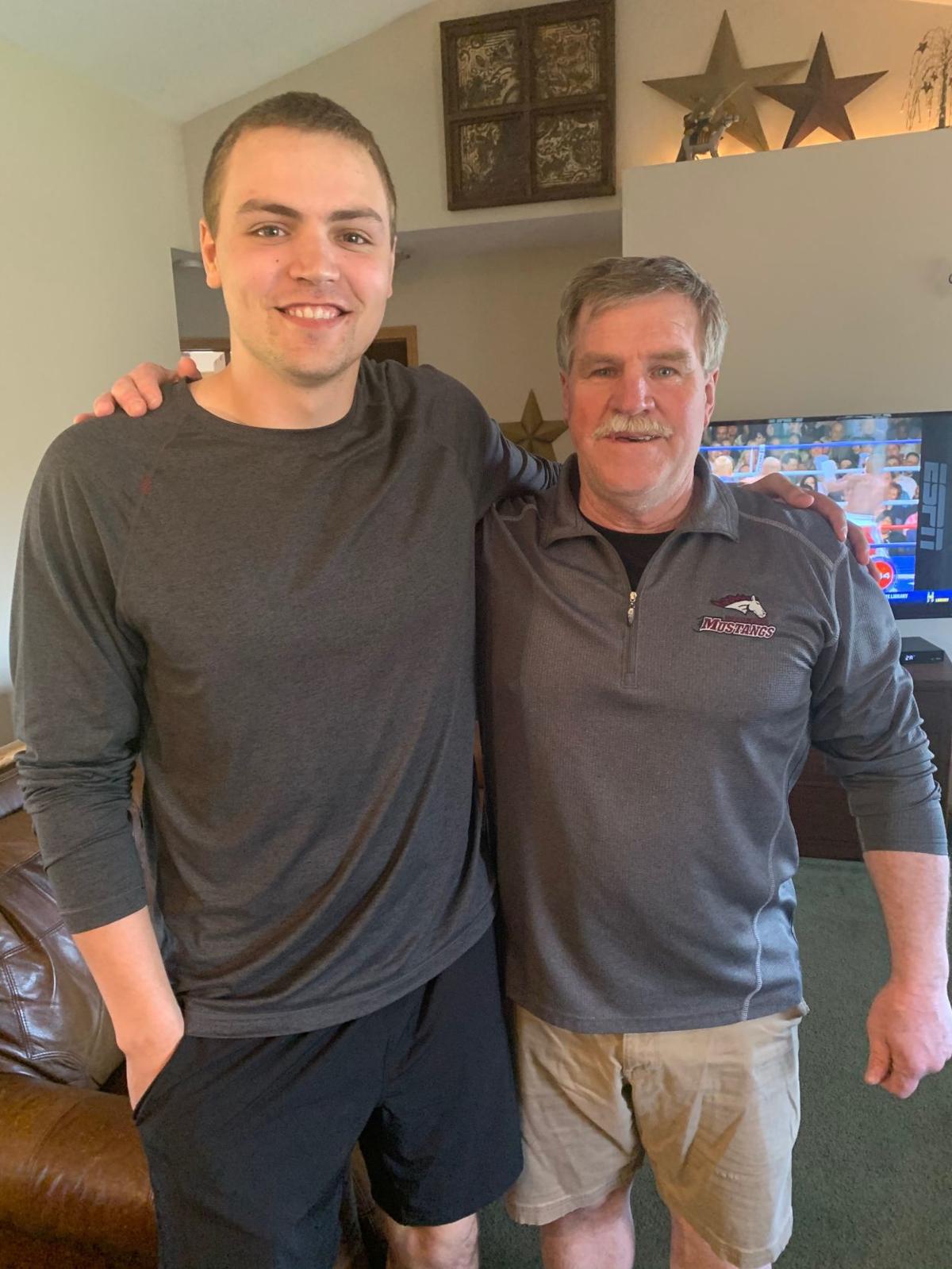 Nate Stanley, left, and Menomonie football coach Joe LaBuda pose for a photo on the final day of the NFL draft. The Minnesota Vikings selected Stanley in the seventh round on Saturday.

Iowa quarterback Nate Stanley runs the ball during the second half against Minnesota on Nov. 16, 2019 in Iowa City, Iowa.

Nate Stanley, left, and Menomonie football coach Joe LaBuda pose for a photo on the final day of the NFL draft. The Minnesota Vikings selected Stanley in the seventh round on Saturday.

Nate Stanley’s football career got its start in Menomonie. He won’t need to go far to begin its next chapter.

The Minnesota Vikings selected Stanley, a former star quarterback for the Mustangs, in the seventh round of the NFL draft on Saturday. He was the 244th pick in the draft.

“I’m super excited,” Stanley said in a phone interview with the Leader-Telegram. “It was a nerve-wracking day, but worth it for sure. This is pretty awesome.”

He wasn’t quite sure when his name would be called this weekend. Projections prior to the draft had the former Iowa quarterback being taken anywhere from the third round to the final round.

It took until the last round to get the phone call, but now it’s official. Stanley will be a professional football player.

“I knew (going late) was a possibility,” Stanley said. “I didn’t think that it was going to be this long, but that’s the way it worked out and now I’m in a great place. It took a little longer than I wanted it to, but I couldn’t be happier with where I’m at.”

Now he’ll get to start life as a pro athlete roughly 70 miles from where he grew up. For longtime Menomonie football coach Joe LaBuda, a close family friend of the Stanleys, it was meant to be.

“Everything happens for a reason. I think God had a plan for him, and now he’s an hour away from his family and they can go watch games,” LaBuda said. “It’s a great situation.”

Stanley heads to Minnesota from Iowa, where he finished his college career ranked second in school history in passing touchdowns (68) and passing yards (8,302). He’s one of only two Hawkeyes quarterbacks ever to post a 3-0 record in bowl games.

“It’s going to be awesome,” Stanley said of teaming up with Cousins. “He’s a great player, been around for a while and has a lot of great experience. So I’m just excited to talk with him. I’m just going to try to soak everything up.”

The Vikings are excited to see what Stanley can bring to the table, according to general manager Rick Spielman.

“He’s a big kid that has a strong arm. He’s won a lot of games in the Big Ten. The one thing I think he doesn’t get enough credit for is for his size, he’s a very good athlete,” Spielman said during a conference call following the draft. “When he opened stride on a couple scrambles in some of the games I saw, he could really move for a big quarterback. And he fits the scheme we’re running: get the ball out quick, timing and rhythm throws, the ability to move in the pocket. So we’re excited to have him come in here and compete.”

Stanley said he had only talked to the Vikings once since the NFL scouting combine in February. But he ultimately wasn’t surprised that they ended up calling him on Saturday.

“I knew that they were one of the teams that needed to add a quarterback,” he said. “There’s a lot of times where if teams think they know enough about you, or you answered all the questions they had at the combine, then it’s not uncommon for the communication to be not much.”

According to certain draft experts, slipping into the final round may have been a product of Stanley needing some development for the pro level.

“He’s got a big, strong, powerful arm. He’s a pure pocket passer,” draft analyst Daniel Jeremiah said of Stanley during ESPN’s broadcast. “He’s not going to create a lot of plays and he struggles when he gets pressured and sped up. But when it’s on time and he can set his feet on the ground, we see some big-time throws.

“He’s just got to be a little bit better playing off-schedule. ... That’s an area where he needs to improve.”

Stanley starred for Menomonie High School before moving on to be a three-year starter at Iowa. He holds school records at Menomonie for both career touchdowns (36) and passing yards (3,674).

Stanley is the first quarterback drafted by the Vikings since Teddy Bridgewater in 2014. He doesn’t have much familiarity with the team’s system and schemes yet, but he’s eager to get to work.

“Right now, I’m at square one. I don’t know much about it,” he said. “I know Coach (Mike) Zimmer and Coach (Gary) Kubiak run an offense that’s similar to what I ran at school, so concepts-wise, schemes-wise it shouldn’t be too bad. I’m just excited to get the playbook here in the next couple of days and dive into it, learn the terms, the verbiage and things like that.”

He grew up a Bears fan surrounded by Packers and Vikings supporters, but Stanley isn’t expecting to have a hard time finding some love when he dons the purple and white.

“It’s super nice to be close to home,” he said. “A bunch of friends from home are Vikings fans. I know that I’m going to be supported extremely well with the people from Minnesota and at home.”