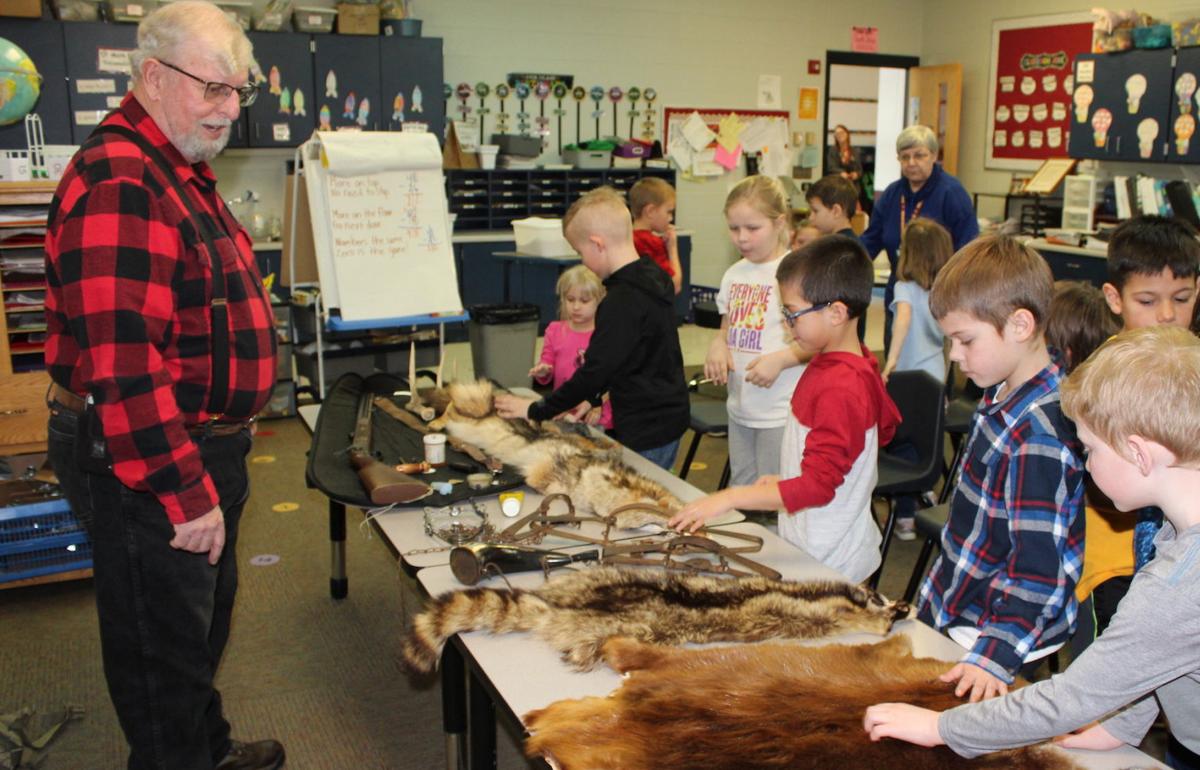 Roger  Willis takes his hides and muzzleloader to the second-grade classes at Woodland Elementary in Barron, during their "Little House on the Prairie" unit. 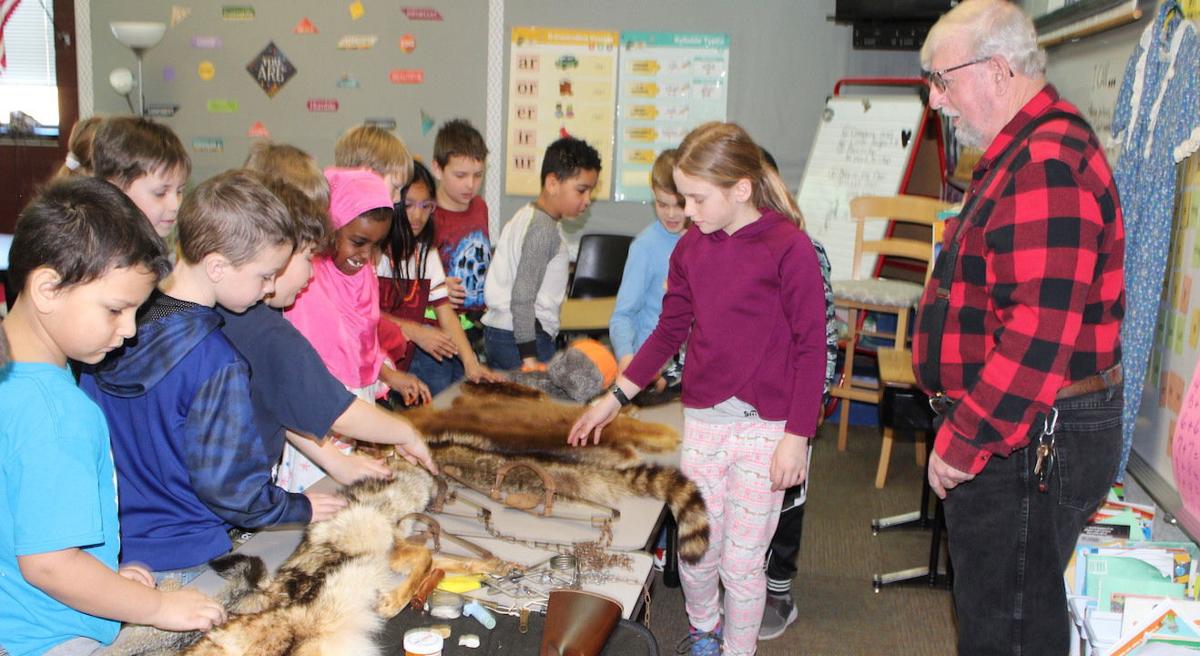 Another class of second-graders at Woodland Elementary of Barron.

Roger  Willis takes his hides and muzzleloader to the second-grade classes at Woodland Elementary in Barron, during their "Little House on the Prairie" unit.

Another class of second-graders at Woodland Elementary of Barron.

Trapper Roger Willis of Barron has elementary students stumped when he asks them who they think taught him to set snares  and traps for muskrat, mink, beaver, coon, skunk, fox and coyote when he was a kid their age.

They guess his dad, grandpa, brother, uncle, neighbor, even wondering if he taught himself.

They are surprised to find out that it was his grandma who waded out into the creek while  wearing dresses that often had mud halfway up before they had set and/or released the traps and whatever was in them.

He explains that after his grandpa had died his grandma took over trapping as a way to make a living.

Willis was a special guest at Woodland Elementary School in Barron on Feb. 24, where he showed his traps, muzzleloader and hides to second-graders who are reading “Little House in the Big Woods” by Laura Ingalls Wilder.

Like a modern day Mr. Edwards, the longtime outdoors man has more trapping and hunting tales than the students have time to hear.  He also reads a book about beavers if time allows.

Willis started visiting the second-grade classrooms at the elementary school in Barron when his son Scott was in the second-grade. That was more than 25 years ago, and the teachers invite him back every year.

Willis said his son and daughters Kari and Angie have families of their own now. He has seven grandchildren, and he loves taking his show on the road  to their schools in Amery and Buffalo, Minn.

“Ninety percent of kids have had no exposure to wild animals,” Willis said, noting that he exposes his grandkids to fishing, hunting and trapping from little on.

The retiree also collects sap for maple syrup on his land and for the past 5 years has raised chickens, which he butchers for the meat. He said his 7-year-old granddaughter Kalena, whom he calls a ‘little mother hen,” loves to stay with them during spring break to help take care of the chickens.

His grandkids know he hunts, fishes and raises chicken for eating, and they always say “it tastes the best.”

Willis is originally from Cornell, where he still owns 40 acres with a cabin between Cornell and Gilman.

An only child, he and his father trapped and hunted in and around the thousands of acres that make up the Chippewa County Forest.

His father also gave him his lifelong enthusiasm for fishing, and he now owns a fishing camp in northwest Ontario, where he spends 3-4 weeks each summer, catching walleyes and northerns from his aluminum craft fishing boat.

City folk might have considered him a country hick in his youth, but it is pretty impressive that the money he earned from his trapping skills helped pay his way through college.

“Trapping helped pay for my education,” said Willis who after high school obtained a business degree from UW-Eau Claire.

With a business degree and adept with numbers, Willis’ first job out of college was doing accounting work as an assistant office manger at Bartongale Heating and Plumbing. He later took another office job, this time at Barron Electric. The jobs were great but not for him, he realized.

He wanted an outdoors job. So he became a field agent for the Farmers Union Milk Marketing Cooperative, meeting with farmers to find and solve problems if there was trouble with their milk testing results.

He then became a service man for Jerome Foods, now Jennie-O Turkey Store, a job he held for 33 years and involved visiting farms throughout the area and into Minnesota. He even became a live haul manager for their operations in Faribault, Minn., for 2 years, but his family wanted to move back to Barron  County.

Upon their return, Willis taught Hunter Safety for 20 years.

He is thrilled to elk hunt out west in  Colorado and turkey hunt in South Dakota and in the local area.

He said the Department of Natural Resources still offers trapping instruction, but  the practice is becoming less common as demand for fur diminishes.

“It’s only for enjoyment or nuisance control now, not income,” the trapper  remarked.

“Roger does a great job talking to kids with his high-interest, hands-on “stuff”—animal furs, traps, muzzle loader, lead bullets,” commented retired Woodland Elementary teacher Lynn Kolpack. “He makes all the hunting stories about Pa in the Little House in the Big Woods come alive.  I always found it interesting that his grandmother taught him how to trap when he was just a little guy.  Roger LOVES talking about hunting and trapping!  He is still an active hunter today!  He’s quite a guy!”

Willis is happy to speak and tell humorous tales to adults as well as kids, and in February spoke to two women’s groups, whose members invited men.

Regional representative of Stonecroft Ministries, Barb Millerman, remarked, “Both the gals and guys who attended the February outreaches of Stonecroft Ministries (the Chetek Area After Five and the Rice Lake Women’s Connection) enjoyed Roger’s sharing of many humorous stories of encounters with wildlife.  They also enjoyed hearing how the various species of animals populating our area have changed over the years.”

Willis said he has also taken his traps and hides to Daybreak, the local program for those with Alzheimer’s or other dementia. “Old-timers remember even if they have dementia,” Willis said. “They still like to touch the fur.”

To schedule an event with Willis, email him at willfive@excite.com.