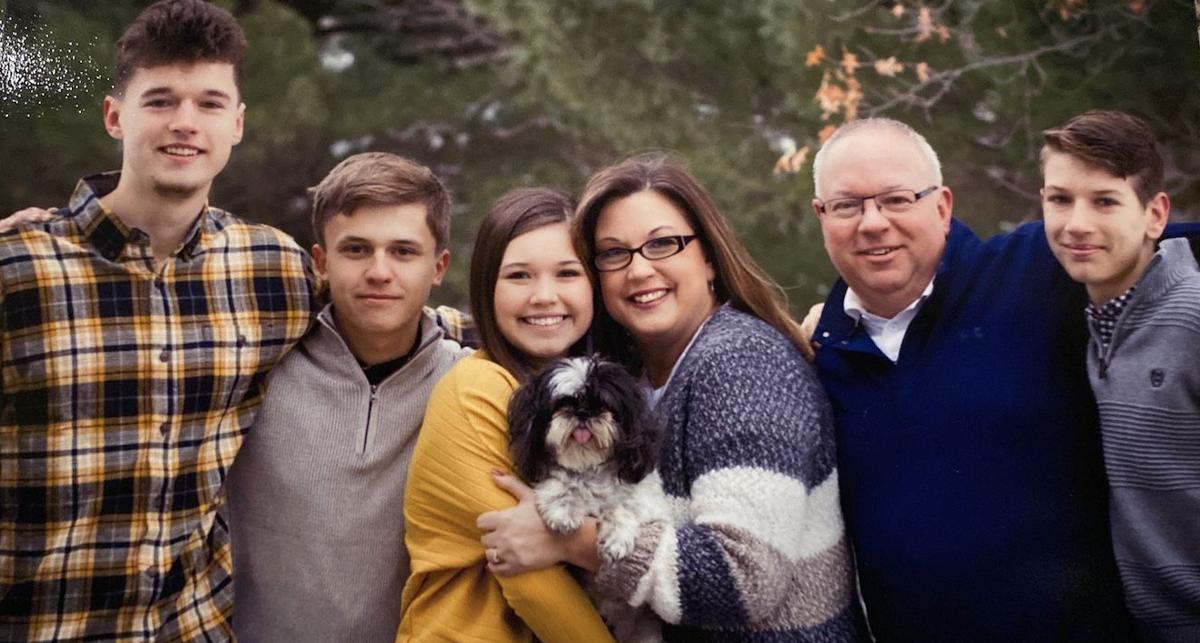 The Nelson’s family Christmas photo had a new addition this year. From left are Tyler, Max Kubicek, Sam, Bella (the dog), Deb, John and Josh. As the smiling faces show, Max has fit in well with their family.

Sporting festive faces over the holidays are the Holmstrom-Beranek family. From left are  siblings Katelyn  and Zach Holmstrom, Vojta Cvik, and Kurt and Angela Beranek.

The Nelson’s family Christmas photo had a new addition this year. From left are Tyler, Max Kubicek, Sam, Bella (the dog), Deb, John and Josh. As the smiling faces show, Max has fit in well with their family.

Sporting festive faces over the holidays are the Holmstrom-Beranek family. From left are  siblings Katelyn  and Zach Holmstrom, Vojta Cvik, and Kurt and Angela Beranek.

To follow is the first of several stories that aim to recognize host families and allow the exchange students to share their impressions and experiences.

Max Kubicek and Vojtech Cvik are two of three students from Rice Lake’s Sister City of Zamberk, Czech Republic. A story about the third student, Emma Dzurbanova, will appear at a later date.

Both Max and ‘Vojta,’ as he prefers to be called, are participating in the American Cultural Exchange Service aka ACES.

Max has spent his first term of the school year with the John and Deb Nelson family. “I was curious how the American school system works, so I thought to myself that this will be a great way to find out,” he said.

He is glad he acted on his curiosity.

“It’s wonderful, everything is just so different from Czech high schools,” he said. “The only thing that gave me a hard time is getting used to having different classmates every class.”

He has favorite fall, winter and spring sports.

“For fall, I tried football for the first time, which was a great experience,” he said.

“Well, to be honest, I’m not a big fan of winter, but it’s the only time when I can snowboard, so I’m looking forward to that.”

Since he enjoys sports, his host family has taken him to see two of the area’s most popular stadiums.

Max said he didn’t have sightseeing must-sees while he is in the United States. He’s just enjoying whatever opportunities come up.

“I’m just letting myself be surprised,” he said.

Asked what he would be involved in if still in Zamberk, he replied, “My school year is not that exciting, so I would probably study, play video games or hang out with friends.”

He misses his family—both of them. Max explained, “Because my parents are divorced, I actually have two families, and in each one, I have a little sister. I miss them.”

Even though Rice Lake and Zamberk are Sister Cities, he doesn’t not think they are very much alike.

“My city is not as spread out as Rice Lake. It’s just weird to me that I have to take a ride to school instead of walking there.”

He said the residents of the two cities are different as well.

“Even though we have 2,000 people difference, I feel like people in Rice Lake know each other better than people in Zamberk,” he observed.

His first host family, the Nelsons, also shared some thoughts on how the school year has gone thus far.

“Our family has talked about hosting a foreign exchange student for a couple years now, but the timing hadn’t been right until this year,” Deb said.

“Growing up, my sister had an opportunity to go to Germany for 4 weeks.  I was amazed that people would open their home up to her even though they didn’t know her.  They took wonderful care of her.  I have always wanted to open up my home to provide a student the same experience that my sister had.

The Nelsons have three  children. Samantha is 19 and attending UWEC-BC; Tyler is 16 and a junior at Rice Lake High School; and Josh is 14 and a freshman at RLHS.

“My children were very excited to find out about Max,” she said. “The boys were thrilled to hear that he wanted to try ‘American football’ as they both play.  They also have snowboarding and gaming in common.  Sam wasn’t so sure about having another boy in the house, but Max quickly became her third brother!”

The host parent added, “Max has truly been a joyful addition to our family!  He has blended in with us so easily.  We LOVE having him here. He always asks if he can help with things from helping with dinner and cleaning up afterward to helping with chores both inside and out.  He has a unique relationship with all three of my children.  He has a fun sense of humor and amazing sense of adventure. We are going to have a hard time letting him go!”

To Lambeau and more

She added, “We have been able to do many fun things with Max since he arrived.  We enjoy spending time at the dinner table getting to know him and his customs.  We have made him endure family game night as well. When he first arrived, we were able to provide him with his first jet skiing experience. The boys had a lot of fun with that, and I think he had fun with it, too.

“We were fortunate enough to be able to take him to a Minnesota Twins baseball game in September and a Green Bay Packers game in October.

“We have plans to take him to the Mall of America, and the boys are already planning many trips out to Christie Mountain to snowboard.  John is excited to take him snowmobiling as well.

“We know how incredibly fortunate we have been to have Max join our family,” Deb said.  “We have had absolutely no issues with him whatsoever.

“I would strongly encourage anyone who is thinking about hosting an exchange student to do it,” she encouraged.  “Not only will it change your life but also offer an amazing experience for a lucky student.”

Vojta spent his first semester with the Kurt and Angela Beranek family, and he will then be with the Jeff and Sue Haughian family until the end of the school year.

Why did he want to spend a year here? “Because a lot of my friends have already been here as exchange students through the Sister City program, and they all said it was a great experience,” he said.

What has he been involved in since arriving? Vojta replied, “I played varsity soccer in the fall. I am currently skiing with the cross country ski team. I am also in the band, playing the accordian; and part of the International Club.”

He added, “I am looking forward to winter. I have already been downhill skiing in Michigan with my host family. Right how I am training to ski the Prince Haakon 15km Birkebeiner race in February. I have enjoyed ice fishing and skating on the ice skating rink at our house. I am also looking forward to snowmobiling this winter.”

The Czech student has participated in many other activities also. “I have went hunting and fishing, shooting at the shooting range; tubing, kayaking and jet skiing on the water; visiting Minneapolis and Green Bay; to see a professional soccer game in St. Paul; and visit the Pumpkin Patch in Rice Lake.”

Back home in Zamberk his hobbies are playing soccer and table tennis, practicing accordion and lifting weights.

He said school here and there are a bit different. “I attend Gymnazium in Zamberk. There are only 25 students in my class. The biggest difference between our school and the school here is we cannot choose our classes, and we have five to seven classes each day for 45 minutes per class, whereas here we are able to choose our classes, and we only have four classes each day for 90 minutes each class.”

His family in Zamberk includes parents, Martin and Jana, and a 13-year-old sister Veronika, with whom he likes to play table tennis.

So far, he has enjoyed his visit. “I really love my new friends and host family in Rice Lake,” the exchange student said. “I had fun playing soccer and going to the state soccer tournament with the team.”

His host family has enjoyed having him. “This  is our first time hosting an exchange student,” Angela Beranek said. “This has been a wonderful experience for our family. Vojta is a very sweet and happy young man. He fits right in with our family and has been a complete joy to have in our house. We are really going to miss him when he moves to his next family.”

She encourages other school district families to open their doors to exchange students.

“We would definitely recommend other families host an exchange student,” Angela said.  “This has been a great blessing for our family.  It is great to open our house up to a student from another country.  We have enjoyed getting to know him, his family, and his traditions.”