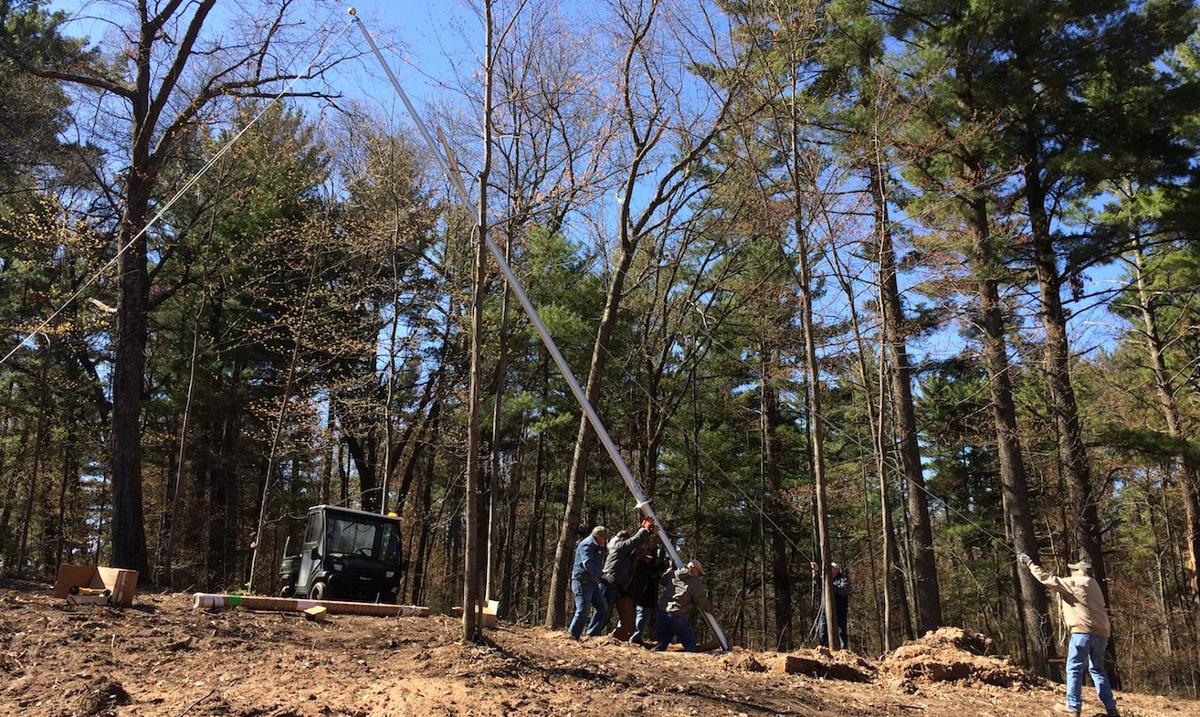 Volunteers plant a new flag pole in the ground at Veterans Memorial Park the morning of May 12. Several government, veteran and business entities assisted in the effort. 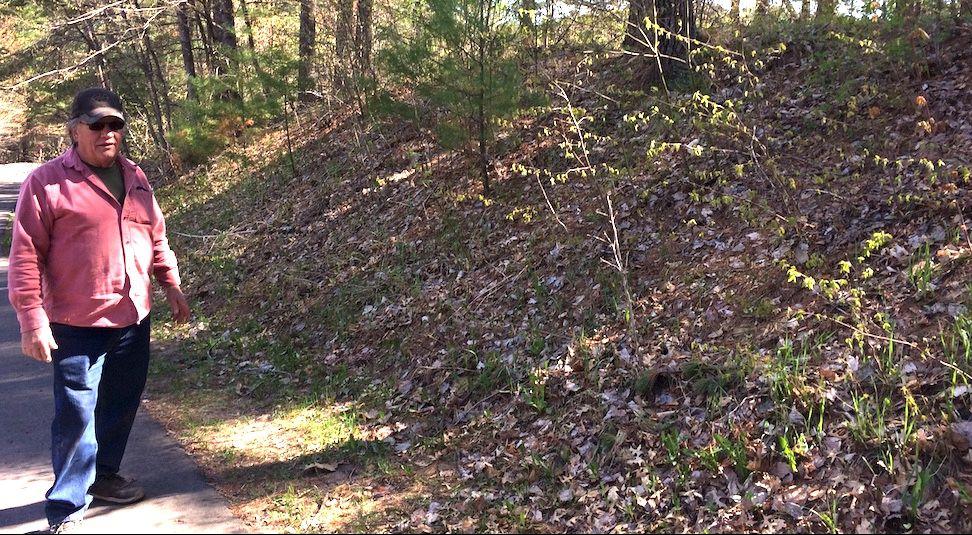 Veterans Memorial Park caretaker Bud Moe shows the sloped area he would like to see landscaped with perennials to attract butterflies. 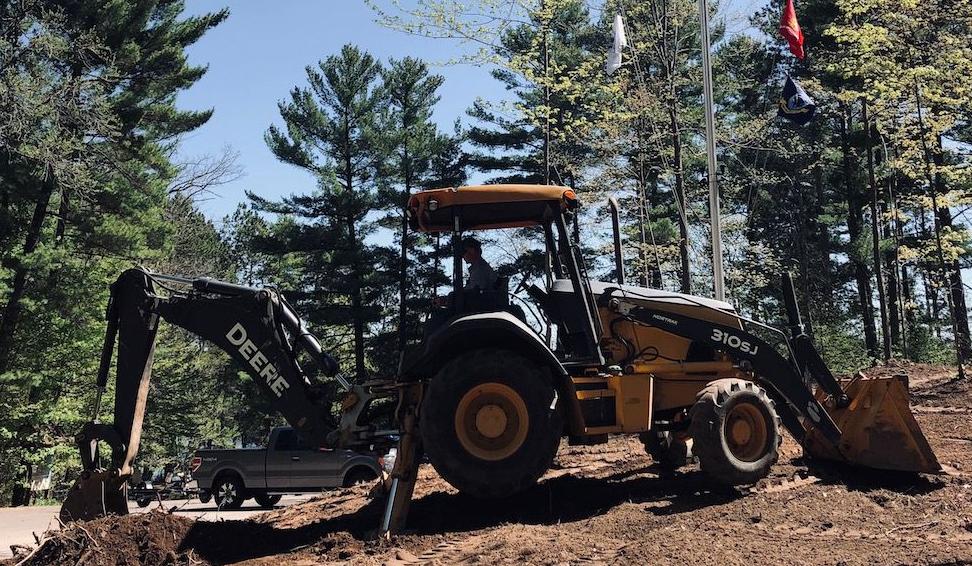 Landscape work began May 20 around the newly installed flag pole with Jack Lapcinski of PUSH, Inc. donating his services. 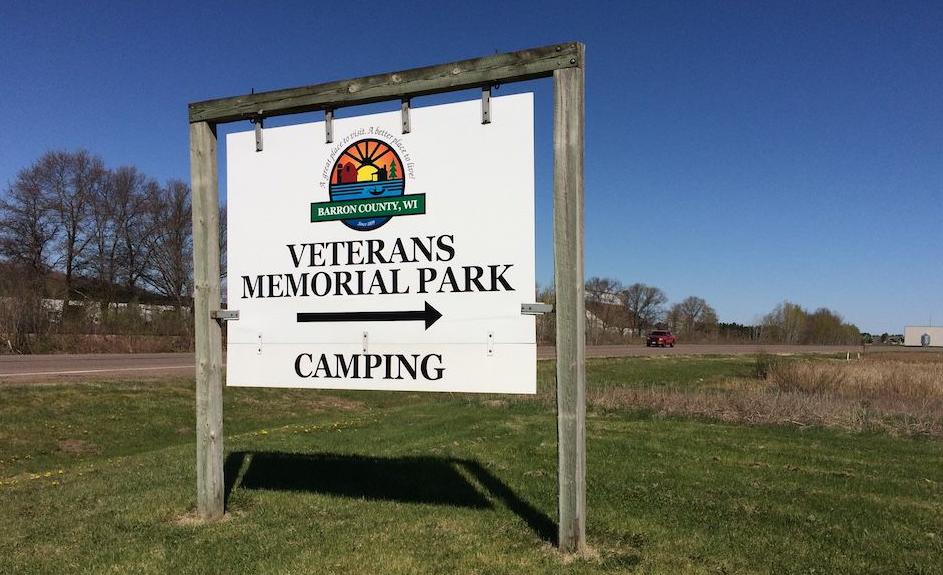 The entrance sign to Veterans Memorial Park is across from the huge grain bins along Hwy. SS, just south of Cameron. Take a left at every option and stay on the blacktop; after 1 mile, the new flagpole should come into view.

Volunteers plant a new flag pole in the ground at Veterans Memorial Park the morning of May 12. Several government, veteran and business entities assisted in the effort.

Veterans Memorial Park caretaker Bud Moe shows the sloped area he would like to see landscaped with perennials to attract butterflies.

Landscape work began May 20 around the newly installed flag pole with Jack Lapcinski of PUSH, Inc. donating his services.

The entrance sign to Veterans Memorial Park is across from the huge grain bins along Hwy. SS, just south of Cameron. Take a left at every option and stay on the blacktop; after 1 mile, the new flagpole should come into view.

It started with a thought in the mind of Bud Moe, who with his wife Jodi are starting their seventh season as caretakers at Barron County’s Veterans Memorial  Park located 1 1/2 miles south of Cameron.

Moe thought, wouldn’t it be nice to round that last curve leading into the park and see a lighted U.S. flag?

The wooded island, surrounded by blacktop, leading to the boat landing around the left and farther into the campground around the right, was the  perfect spot.

Moe  said he had always thought the area looked scraggly, especially in the spring and fall.  After a tall pine tree toppled down on the spot last summer, he thought it was time to present his idea to county officials—county parks/maintenance coordinator Ken Beranek, veterans service officer Scott Bachowski and county administrator Jeff French.

With approvals from them, Moe proceeded to the Property Committee, which last October approved of his plan on the condition that no taxpayer funds be used for the project.

At that point, Bachowski contacted Larry Johnson, who is a member of and/or has contacts in several veterans groups.

“I think it was a real good idea,” said Johnson, who not only secured a flag pole and flags at a discounted price but rallied the troops to help assemble it on the sunny morning of May 12.

S & R Towing transported the 30-foot flag pole to the park. But before that, other businesses got involved to make it happen.

Moe said Beranek and his crew cleared some trees and disposed of the tops with a shredder. Jack Lapcinski, who owns PUSH, Inc., brought in his heavy equipment and took out the stumps. Then Rick Miller of Cornerstone  Concrete donated his time and materials to make the base.  He will be back to put in a concrete path around the flag site at a later date.

Miller, although busy with several other jobs, explained why he got involved.

“I’ve always had a special place in my heart for the military,” Miller said. “I’ve always told people that if I could do things over again—not forsaking anything that has happened—I would have gone straight into the Marines out of high school. I’ve always enjoyed hearing military stories. I came from a family of military people on my mom’s side. So there’s some heritage and there’s also maybe a little regret that I didn’t go into the military.”

The concrete business owner added, “So this is an opportunity for me to give something back, or maybe not give back, but to do something that is related to veterans in a worthy place.”

Miller also gave a shout out to Moe. “Bud has really spearheaded it, and he’s got a vision for it, and he’s really excited about it. He has really turned that place around from what it was even 5-6 years ago to today. So a little shoutout to Bud Moe for his work and his dedication to Veterans Memorial Park.”

Bachowski, who lent a hand with the flag pole raising effort, remarked “I’m very pleased that Bud brought it to our attention. In my opinion, the park was missing the perfect touch, and now it has it! I’m excited that at the final turn into the park, people will see it right in front of them, and I hope it brings a smile to their faces.”

The Veterans Service Officer added, “I think it looks great! We have landscaping to complete and lighting. I secured a donation of a few maple trees to go in since we had to take a couple more down. I cannot wait to get the landscaping done.”

County administrator Jeff French said,  “I agree with Scott’s comment with these additional ones. No county funds were spent on this project other than county staff provided some minor help. This memorial was approved by the Property Committee with Scott’s concurrence.”

In addition to the Disabled Veterans, American Legion and VFW organizations, other contributors to the project were the Barron County Tavern League, Wisconsin Tavern League Foundation, Rick Flinn, and Jim and Terrie Larsen.

Moe said while the site is ideally situated for a memorial, much landscaping remains to be done. The caretaker said Lapcinski confirmed he will be back at the site this week to prepare the soil.

Moe had originally considered asking the public for hostas for groundcover on the 14-foot wide by 150-foot long slope around the flagpole site, but he also wants some plants that will attract butterflies and hummingbirds.

“I think I want to get guidance from the Barron County Master Gardeners before we get too far on planting,” he said. “That should be soon, but not exactly sure. I want all my ducks to be in a row.”

The caretaker said benches and other additions may follow. He is also hoping Boy Scouts, looking for a project, might clean up the hiking trails and walking bridge in the area surrounding the memorial  flagpole site.

He thinks it would also be an appropriate place for some kind of commemoration to the family or families who donated the land for the campground.

According to information on the county website, the 160-acre Veterans Memorial Park is located on Prairie Lake, which is part of a chain of five lakes, all interconnected.

It and other Barron County campgrounds opened May 2. Updated information on Veterans Memorial or any of the other county campgrounds may be found online at parks.co.barron.wi.us/parks/camping/veterans_memorial_park.