Aquafest Grand Marshals Marlene and Duke Thurs greet the crowds lining Main Street in Rice Lake. Blue skies reigned over Sunday’s Aquafest parade that was back after a two-year hiatus, canceled last year because of COVID-19 and the previous year because of inclement weather. Hundreds of spectators cheered on the parade units. View more photos on Page A9 and online at Rice Lake Chronotype.

The executive director of Rice Lake Main Street Association presented plans to bring elite roller skiers to the city in July for the Olympic hopefuls to compete in time trials and drum up tourism.

De Anna Westphal stood before the City Council June 8 to discuss a combination of a roller skiing event and fundraiser in Knapp-Stout Park to pay for community tree and park lighting.

“This is community first, tourism second, but without a doubt this will drive people in,” she said of the community tree event.

But Westphal wanted to go further.

International Olympic hopefuls are doing time trials and they are important to qualify for the international competition. And roller skiing is a sport where people use elongated roller skates and use two poles much like cross country skiing. It’s a training tool for cross country skiers during the summer months when they can’t hit the snow-covered trails.

“Without a doubt this will bring people in,” Westphal said.

She said local business owner Bjorn Hanson, who proposed the event, lined up 60 international skate skiers to come to Rice Lake, “sight unseen.” It’s an opportunity to showcase the downtown, and promote business for hotels and restaurants.

The time trials, which would be official for qualifying for the Olympics, would be on Lakeshore Drive from East Newton Street and end at Knapp Street. She asked for the street to be closed and that the council waive the cost of doing so.

The 1-kilometer event would take place from 1 to 4 p.m. on July 10. People on the lakeshore and pontoons could watch the elite skiers, Westphal said.

“These Olympic hopefuls might be the next ones we watch on TV,” she said.

The benefits also include bringing the community together, drawing in tourists and growing interest in the area with silent sports, as well as bring in spectators from the Twin Cities and Chicago area.

Sponsorships are almost paid for in its entirety, Westphal said, and several livestream and other media want to come to Rice Lake to watch this, putting the community on the international map.

In other consideration, Councilman Doug Edwardsen presented information on ordinances regarding animals after hearing from a woman who commented on a neighbor who is raising 60 to 70 farm animals, from chickens to goats, in city limits.

Edwardsen noted the city has ordinances on cat and dog ownership and possession of exotic animals, but nothing on farm animals. He expressed concern over how quality of life can be impacted by the presence of a farm-type property in a city neighborhood.

“It’s not about this one neighbor, it’s about our community,” he said. “Is this a place where we think farms should be within our neighborhoods?”

Councilman Harlan Dodge added concerns that a severe rainfall could cause feces to get washed into the street.

The council directed city staff to create a new ordinance or amend an existing ordinance to cover raising farm animals within the city limits.

The Rice Lake Police Department recently investigated the death of a man found in a later stage of decomposition in his home while his wife sat in a recliner next to the body, insisting that he was sleeping.

According to a news release from the Police Department, officers responded to 303 Reuter Ave. at approximately 4:51 p.m. on June 7 to check the welfare of a man identified as E.K. after a neighbor reported smelling a strong odor coming from inside the house.

Although the news release did not identify the man, according to the police log of a response to the address at that time and day, officials requested a death notification be made to the son of Edwin Keeley Sr.

Officers entered the house after obtaining a search warrant and found the man dead in the living room of the residence. The man’s unidentified wife sat in the same room, was extremely intoxicated and repeatedly said her husband was sleeping.

It was apparent to officers that the man had been dead a lengthy period of time. The Rice Lake Fire Department helped remove the body because of the advanced state of decay.

The Police Department launched a death investigation, and an autopsy was performed by Midwest Medical Examiner’s Office in Ramsey, Minn. The medical examiner reported no apparent signs of foul play, the news release said, but the cause and manner of death are pending. Officers who found the body did not observe any injuries to him.

No criminal charges will be filed against the man’s wife, the news release said. There are no suspicious circumstances surrounding his death at this time. The wife had convinced herself that he was sleeping.

The Barron County Department of Health and Human Services has been notified of the wife’s level of intoxication and concerns about her ability to care for herself.

The Barron County sheriff suffered injuries Thursday as a result of a vehicle and foot chase in Rice Lake. 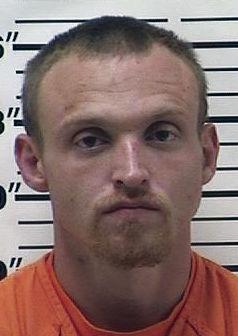 Donnie Strand, 29, of Rice Lake has been changed with three felonies — second-degree recklessly endangering safety, fleeing an officer and bail jumping. Further charges include two misdemeanor bail jumping and operating while intoxicated, first offense, which is a traffic forfeiture.

Barron County Sheriff’s Deputy Donald Weise said he saw a black car traveling directly behind him northbound on 19th Street go over the centerline and then violently jerk back no less than four times. The car also drove over the fog line or onto the shoulder of the roadway.

Weise allowed the car to pass him and tried to pull the car over.

The vehicle initially braked and pulled to the right as if it was going to stop, but then continued north at a slow speed.

The vehicle turned east on 18½ Avenue.

The car came to a stop in the middle of the road and Weise saw a man later identified as Strand hanging out the driver’s window. He started shouting at Weise, the complaint said.

The pursuit resumed and as the car went through the roundabouts, it went straight over the top rather than following the roadway and increased speed.

After the vehicle hit the curb on 18½ Avenue near College Drive, Weise saw blue smoking coming from the front right portion of the car.

The car continued, traveled east on East Bracklin Street and then north into an alley between South Main Street and Macauley Avenue.

The car exited the alley at East Sawyer Street, and Sheriff Chris Fitzgerald reported that he was on scene and had sight of the vehicle.

The vehicle jumped the curb into the grassy area near Tuscobia Trail and Mastercraft.

Strand left the car and ran west into the Mastercraft factory property. Fitzgerald pursued him on foot as Weise positioned his squad car to set a perimeter and hold the defendant in between buildings.

After ensuring the building was clear, they circled it and found Strand lying on the ground in a spread eagle position.

While Weise escorted Strand to his squad car, the defendant became highly agitated and began screaming and kicking at the door of the squad after being placed inside.

During the pursuit Fitzgerald suffered injuries, including a fractured elbow and pulled hamstring. He was transported to Marshfield Medical Center for treatment.

If convicted of second-degree recklessly endangering safety, Strand faces a fine up to $25,000, imprisonment for up to 10 years, or both.

Conviction of attempting to flee an officer carries a fine up to $10,000, imprisonment for up to 3½ years or both.

If convicted of felony bail jumping, Strand faces a fine up to $10,000, imprisonment for up to six years, or both.

On Friday a cash bond was set at $1,000, and Strand’s next court appearance is a preliminary hearing on June 22.