From left, Kiwanis members Wally Narins and Pat Blackaller confer with teacher Jeremy “Pete” Peterson on how to connect the coronavirus replica to the metal sled below.

After the Rice Lake High School’s bell rang for the final time Friday, a handful of Kiwanis Club volunteers cornered the coronavirus, thinking it could easily be brought to heel. Alas, like most endeavors attached to this project, it was anything but simple.

But after much toil on the part of the school’s Fab Lab students, teacher Jeremy “Pete” Peterson and the Kiwanis, a 6-foot-diameter plywood replica of the virus sat on Rice Lake near the Moose Lodge at the end of the day. They all hoped it would sink into the frigid depths before the state Department of Revenue expected it to be removed.

“I think we would like to see this thing sink through the lake and never come back,” Peterson said.

The adventure began when the Kiwanis Club cast about for a fundraiser. According to member Wally Narins and Interim-president Paul Chase, Sue Strouf threw out the idea to “sink the virus” — creating a replica of the coronavirus, setting it on the lake and giving people the chance to guess when it would disappear from sight. Strouf, the school’s director of pupil services, then approached Peterson about turning the venture into a Fab Lab class project. 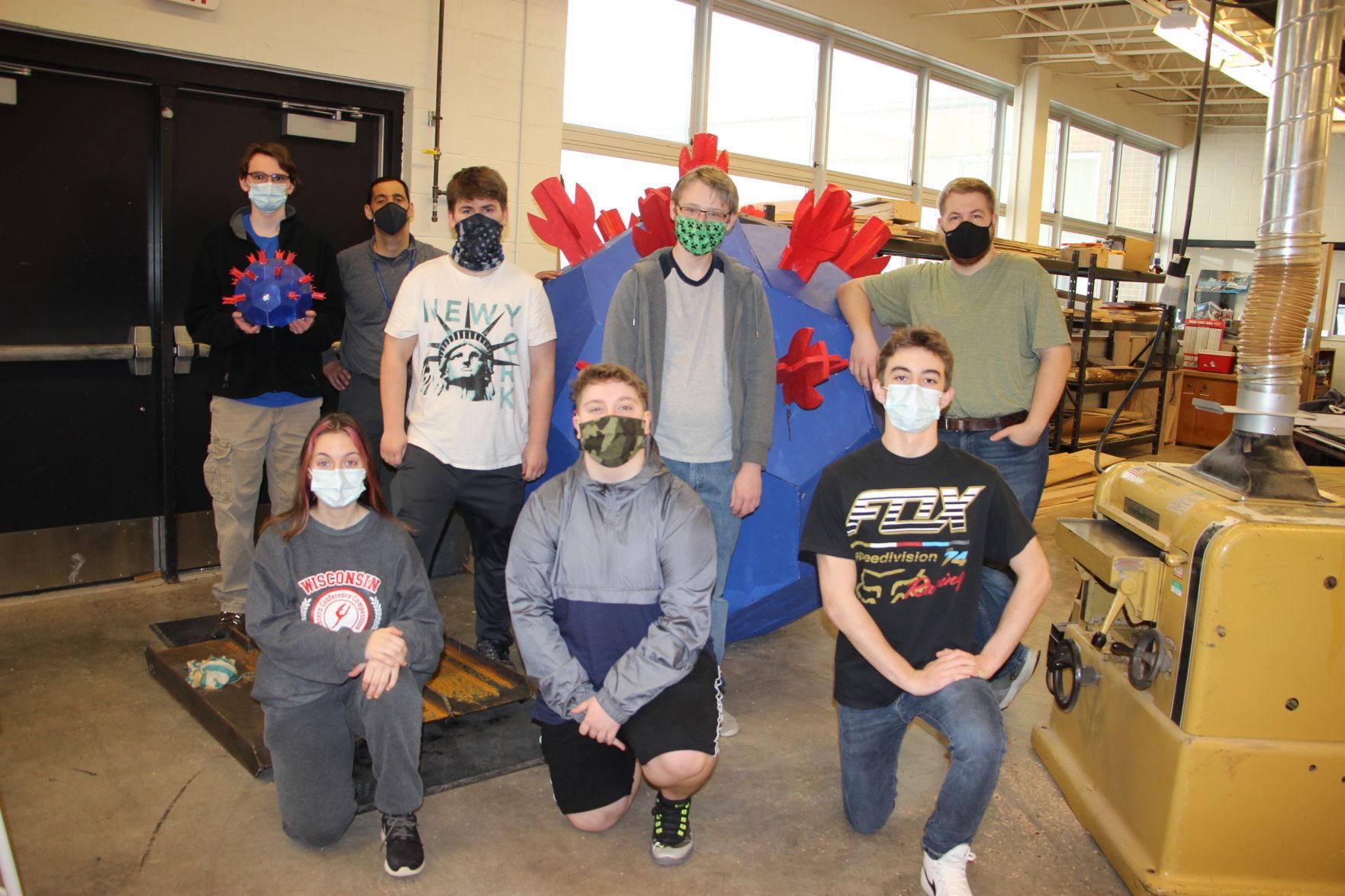 Peterson handed the mission over to his woodworking students, asking each of them to make a small model.

Basing their work on a truncated icosahedron, Dennis and fellow student Michael Wishall made the final model as a template for the 6-foot-diameter replica of the coronavirus which would sit on the ice. While working on the hand-held version Peterson and the students began to get a taste of how much they needed to learn and the problems they had to overcome without help from academia.

“There’s no textbook on how to do this,” Peterson said.

Challenges began to surface as the students tried to multiply a 1-foot-diameter model by six. At one point they resorted to watching a video showing the angles they supposedly should be using. 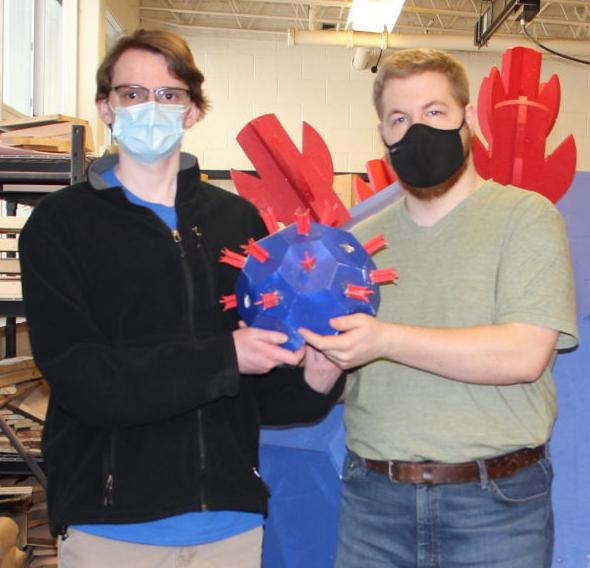 Michael Wishall, left, and Braeden Dennis hold the model of the coronavirus replica that was translated into 6-foot-diameter version to be placed on Rice Lake as part of a Kiwanis Club fundraiser.

“Even then it didn’t work well,” Wishall said.

But the students persevered, overcoming challenges with bowing, beveling and fitting the latticework of hexagons and pentagons together with glue and brackets.

“As a team we put everything together, which was kind of tricky,” Peterson said.

After painting the hollow sphere that needed 10 sheets of plywood procured with a donation toward materials from Lamperts and fixing the coronavirus’ distinctive red spikes, Peterson handed his students’ creation off to the Kiwanis to haul to the lake. Even that didn’t go as planned.

Kiwanis President Drake Tomesh pulled up to the Fab Lab doors at about 3:30 p.m. with trailer in tow. Narins met him there and eventually Chase and Kiwanis Pat Blackaller, also the director of finance and operations for the Rice Lake School District, appeared — only to discover the next hurdle.

The sphere was meant to be attached to a metal sled created by teacher Chuck Carr’s welding students. Although the coronavirus replica was easy to maneuver, the sled was necessary to ensure that the piece sank straight down and then could be more easily retrieved afterward.

Peterson had sawed a hole into one of the lower panels only to discover the model and the sled weren’t aligned quite correctly to enable a connection. The metal needed to be whittled down a bit.

Peterson grabbed an angle grinder with a metal cutting blade and away he went, sparks flying from beneath the plywood sphere. As he tried to get the coronavirus lower to sit better on the sled, Tomesh pitched in by helping to leverage the model upward while Blackaller took over the welding tool. 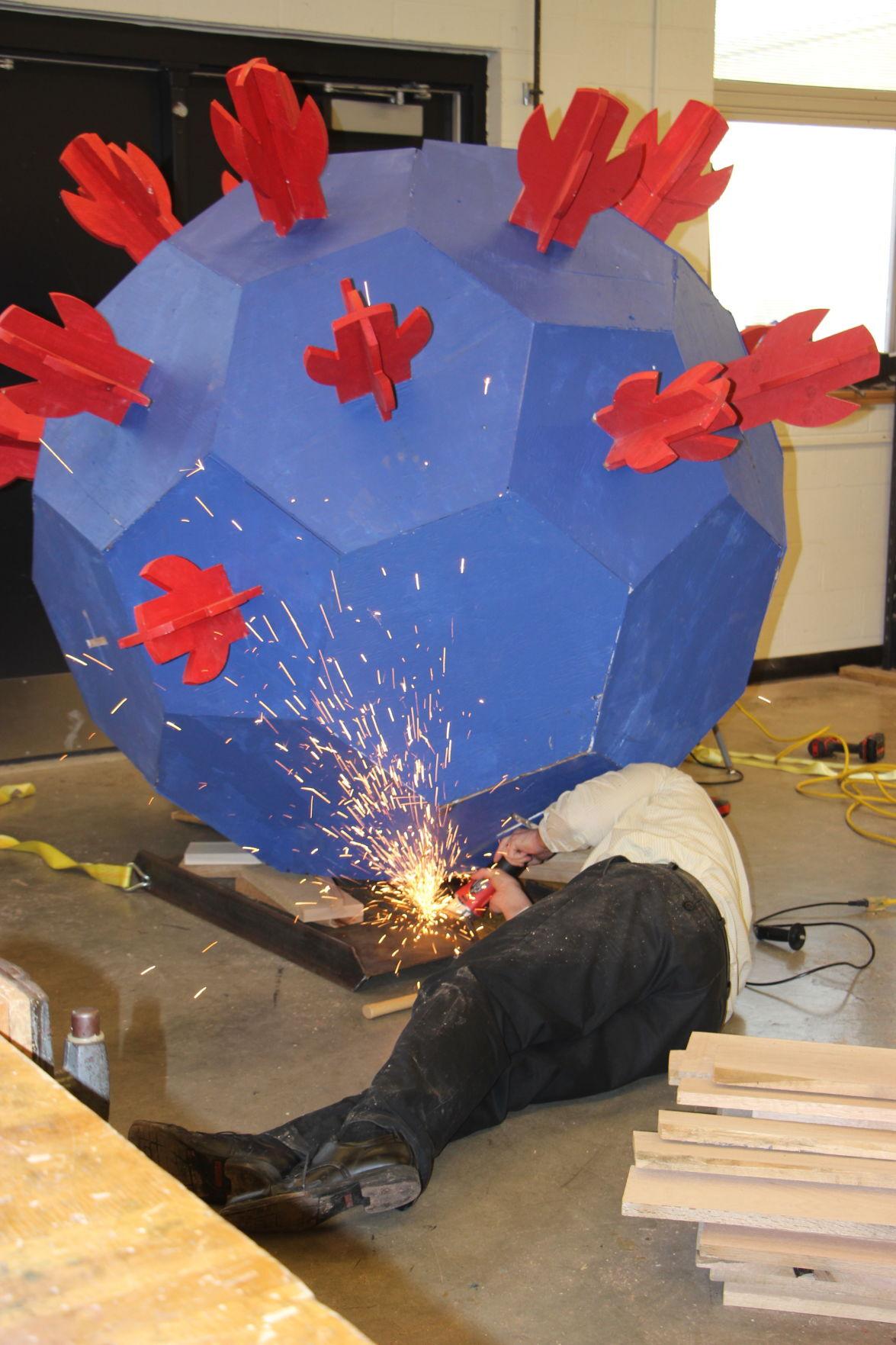 Kiwanis Pat Blackaller lets the sparks fly while working on the metal sled that will attach to the coronavirus replica.

Again sparks flew — and continued for about 45 minutes.

Eventually the coronavirus settled into the right spot, the connection was made and the four Kiwanis dragged the model — which Peterson estimated to weigh several hundred pounds — onto Tomesh’s waiting trailer.

The men drove the coronavirus onto the ice near the Moose Lodge, much to the amusement of diners and snowmobile racers, who had set up on the lake for competition. Settled up against the snowbank, the coronavirus model waited until Monday afternoon, when Narins returned to pull it further out onto the ice. 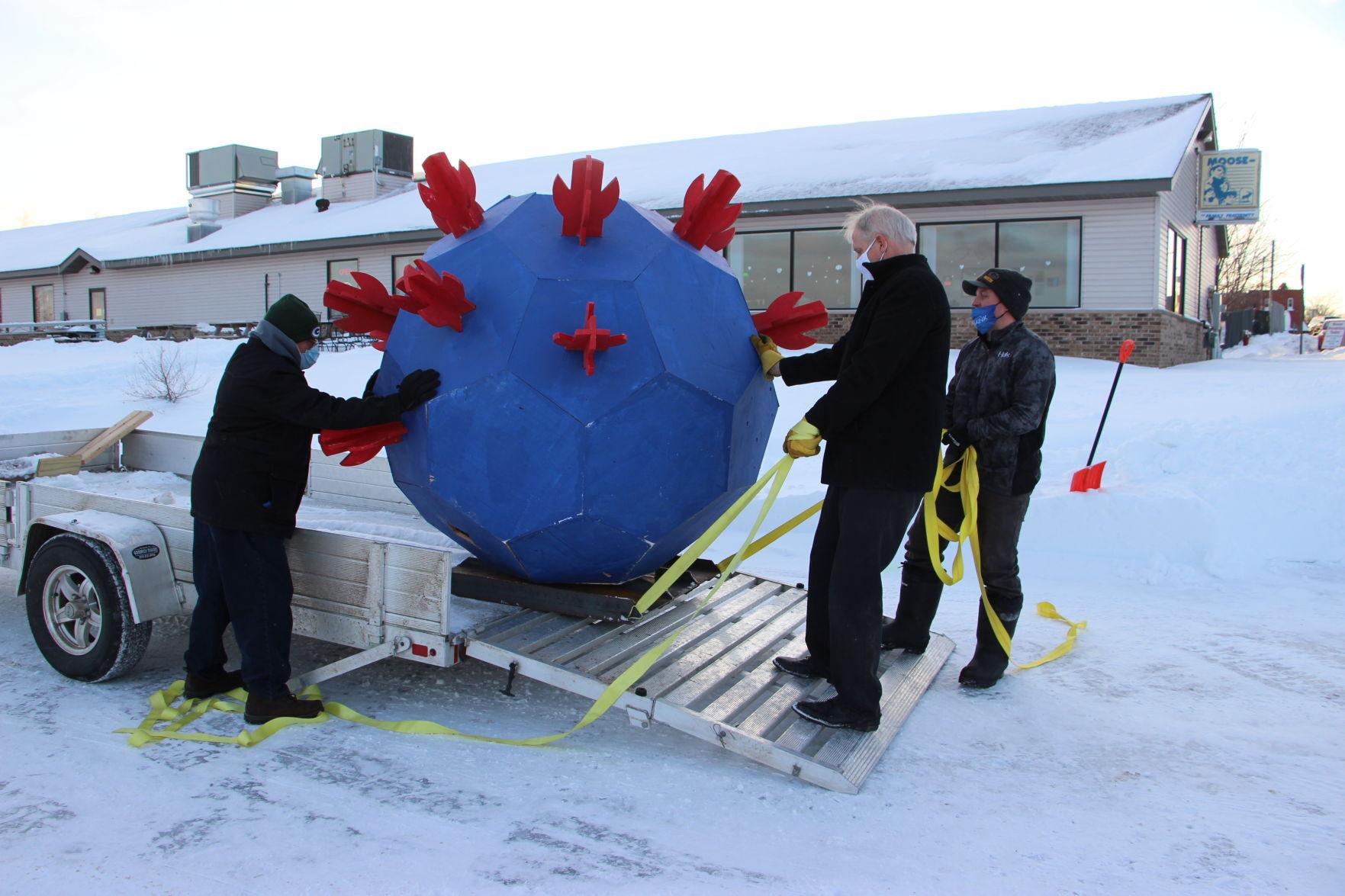 From left, Kiwanis Paul Chase, Pat Blackaller and Drake Tomesh deliver the coronavirus replica to the Rice Lake shoreline near the Moose Lodge.

People are welcome to guess when the coronavirus will disappear beneath Rice Lake’s icy waves up until March 15. For $10 they will get one guess; for $20 they get three. The winners will be the people who guess closest to the date and time that the coronavirus sinks 100%. In case of a tie, the person who guessed first wins.

Sunday morning the Rice Lake Fire Department responded to a fire in a two-car garage and succeeded in extinguishing the blaze within 2 1/2 hours.

The Fire Department was dispatched to the home of Steve and Jill Roux, 1515 Haugen Ave., at approximately 6:56 a.m.

The first unit arrived about three minutes after the call came in and found heavy smoke and fire showing from the attic of the attached two-car garage. The garage door was cut away and firefighters removed two-vehicles.

The fire was under control by 7:15 a.m., but extensive work was required to ensure that all hots spots had been extinguished.

The garage area suffered heavy fire damage with moderate smoke damage throughout the living area of the one-story structure. Damages are estimated to be about $80,000 for the structure and contents.

All units cleared the scene by approximately 9:21 a.m.

The temperature was recorded at 23 below zero. Fire Department personnel said while battling a blaze at such low temperatures, firefighters keep an eye on each other and paramedics are on hand for the duration of the incident.

Mainly firefighters worry about water freezing in the trucks, according to Fire Department personnel. They circulate the water through the pumps and let some water trickle out.

Most of the time the expression is tossed about innocently, almost as an afterthought. But for two west-central Wisconsin men, it was a plea to get their rights restored decades after they were found guilty of minor offenses.

That plea was answered this week when Gov. Tony Evers granted pardons to Bob Johnson of Bruce, Kimm Laursen of Cumberland and 35 other individuals from across Wisconsin.

“When I got the news about my pardon, it was the best thing ever,” said Johnson, 53, a successful small-business owner who first applied for a pardon 20 years ago. “I thought it might never happen.”

Johnson was 24 when he was convicted of a low-level felony for writing and cashing two checks totaling $220 from someone else’s account, according to the governor’s office. Contacted Thursday at his home in Bruce, Johnson said he actually only cashed one check for $100 that was given to him by his girlfriend to buy beer.

“It was a one-time thing, and it was the stupidest thing I’ve ever done,” he said. “Not a day has gone by that I didn’t think about how stupid I was that day, but I was just a kid.”

The story is similar for Laursen, who bought a stolen motorcycle nearly 40 years ago in Eau Claire and has been paying for it ever since. Despite being a longtime business owner who has been clean and sober for 33 years and who volunteers at organizations that help people struggling with alcohol misuse, Laursen said his youthful indiscretion stayed on his record because the motorcycle was valued at more than $500, making it a class E felony.

“It’s like one more monkey off my back,” a relieved Laursen said. “It was just one more thing of my old lifestyle that was still hanging on a little bit, and I’m so glad to be done with it.”

This week’s 37 pardons bring to 144 the number of pardons that Evers, a Democrat, has granted since taking office two years ago. He revived a process that was dormant for nearly a decade under former Republican Gov. Scott Walker. Most of those Evers has pardoned committed low-level drug and theft offenses.

The latest round of applicants made their cases virtually to the Governor’s Pardon Advisory Board in December and January hearings.

“From mistakes made as teenagers to desperate times as they struggled with homelessness or substance misuse, what we have seen overwhelmingly from applicants is a desire to move forward, give back and make peace with their pasts,” Evers said in a news release. “I am glad to pardon these 37 individuals and continue the good work of the Pardon Advisory Board to give folks second chances.”

A pardon doesn’t remove a conviction from someone’s record, but is considered an official grant of forgiveness that restores certain rights, including eligibility to own a gun, serve on a jury, hold public office and hold certain professional licenses or positions.

Individuals convicted of a Wisconsin felony, with the exception of those required to register on the sex offender registry, may apply for a pardon if they completed their sentence at least five years ago and have not committed any new crimes.

Both Johnson and Laursen said they were grateful to Evers for their pardons and indicated they look forward to exercising their newly reclaimed rights, including the ability to go hunting and possibly run for local government office.

Johnson said he finally won’t have to say no when his grandchildren ask him to go hunting with them, and he might even try fishing in Canada — where he was banned from traveling because of the felony conviction on his record.

“They’ve got the biggest northerns in Canada, you know,” he said with a chuckle shortly before heading out ice fishing on a local lake.

Johnson recalled the sting of being rejected for jobs and even for opportunities to accompany his grandchildren on school field trips because he had to check the box indicating he had been convicted of a felony. He got around the employment hurdle by starting his own trucking company, Johnson Transport, but said the black mark on his record still hung over his head for the past three decades.

“There are just things you can’t do,” he said. “It’s unreal that it’s finally behind me.”

While he understands what he did was wrong, Johnson said he believes he has suffered enough.

“It hangs over you like you wouldn’t believe,” he said. “The worst punishment was waiting 30 years to get cleared.”

Laursen, a grandfather of 13 who operates The Hair Company barbershop in Cumberland, would like to try grouse hunting again — something he enjoyed as a young man — and has pondered a run for city council or municipal judge.

“I want to be able to do anything I want to do again,” said Laursen, 64, acknowledging that the pardon also will help him shed the shame that accompanied his criminal record.

Laursen, whose case for a pardon included letters of recommendation from community leaders, said he is thankful Evers brought back the Pardon Advisory Board and encouraged others dogged by a mistake in their past to pursue the pardon process.

He blamed his past trouble on “twentysomething attitudes,” substance abuse and hanging around with a bad crowd.

“It was a long time ago,” Laursen said.

And now, thanks to his long-awaited pardon, he can finally close the book on that chapter of his past.