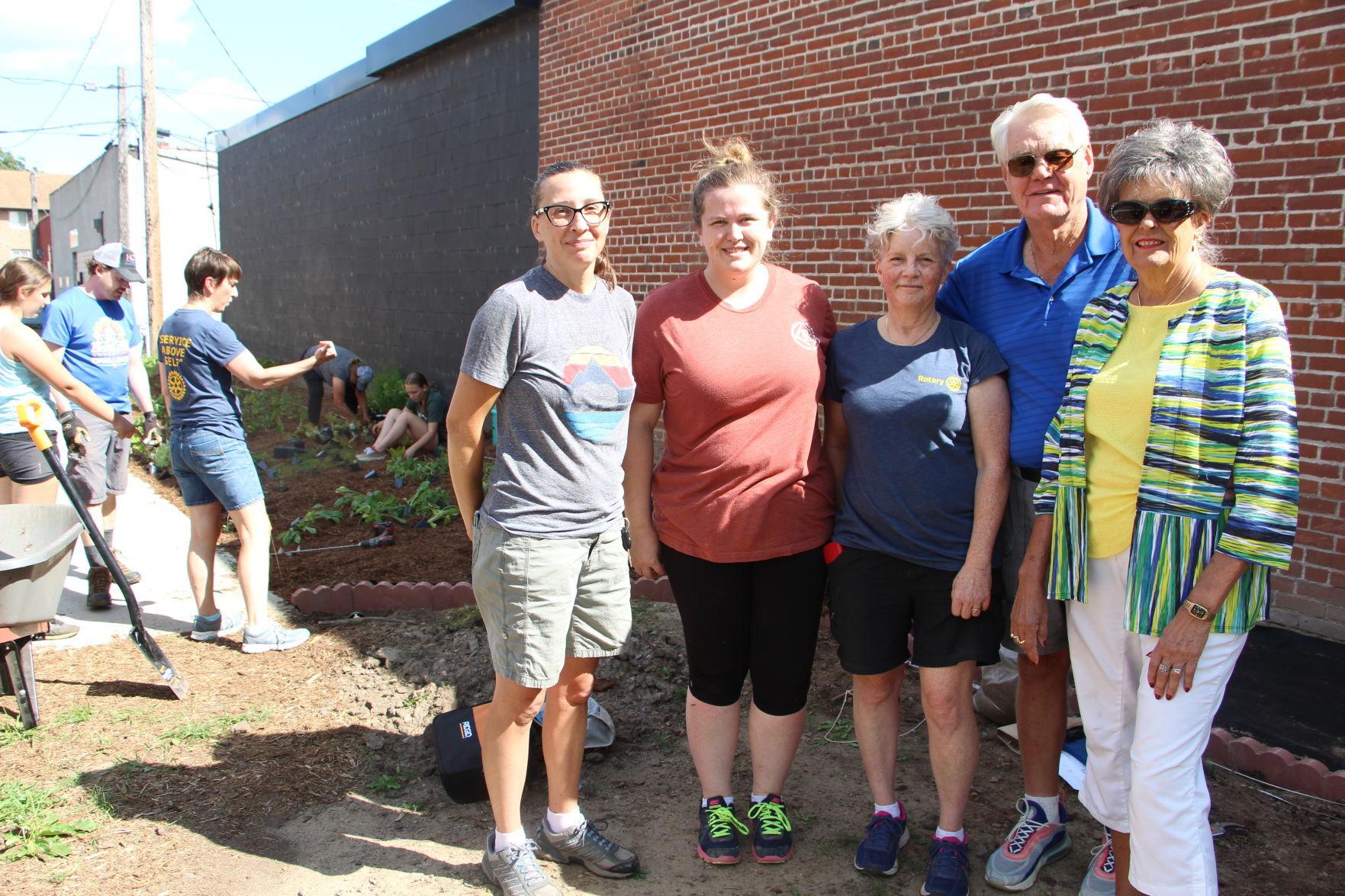 Volunteers and, from left, Amanda Kostner, Claire Parrish and Kim Cobb, work on planting a pollinator garden Friday at the Rice Lake Public Library, while benefactors Norm and Margaret Engstrom visit. The Engstroms donated money to the Rotary Club, which is spearheading the project, from a Foster Friess bequest.

Volunteers swarmed around the Rice Lake Public Library like busy little bees Friday and Saturday to plant perennials, wild flowers and grasses, and ferns to attract — well, bees, plus birds, mammals and any other creature that could be enticed to pollinate plants near and far.

Norm and Margaret Engstrom of Rice Lake donated $50,000 they had received from Foster Friess to the Rotary Club to fund community projects. 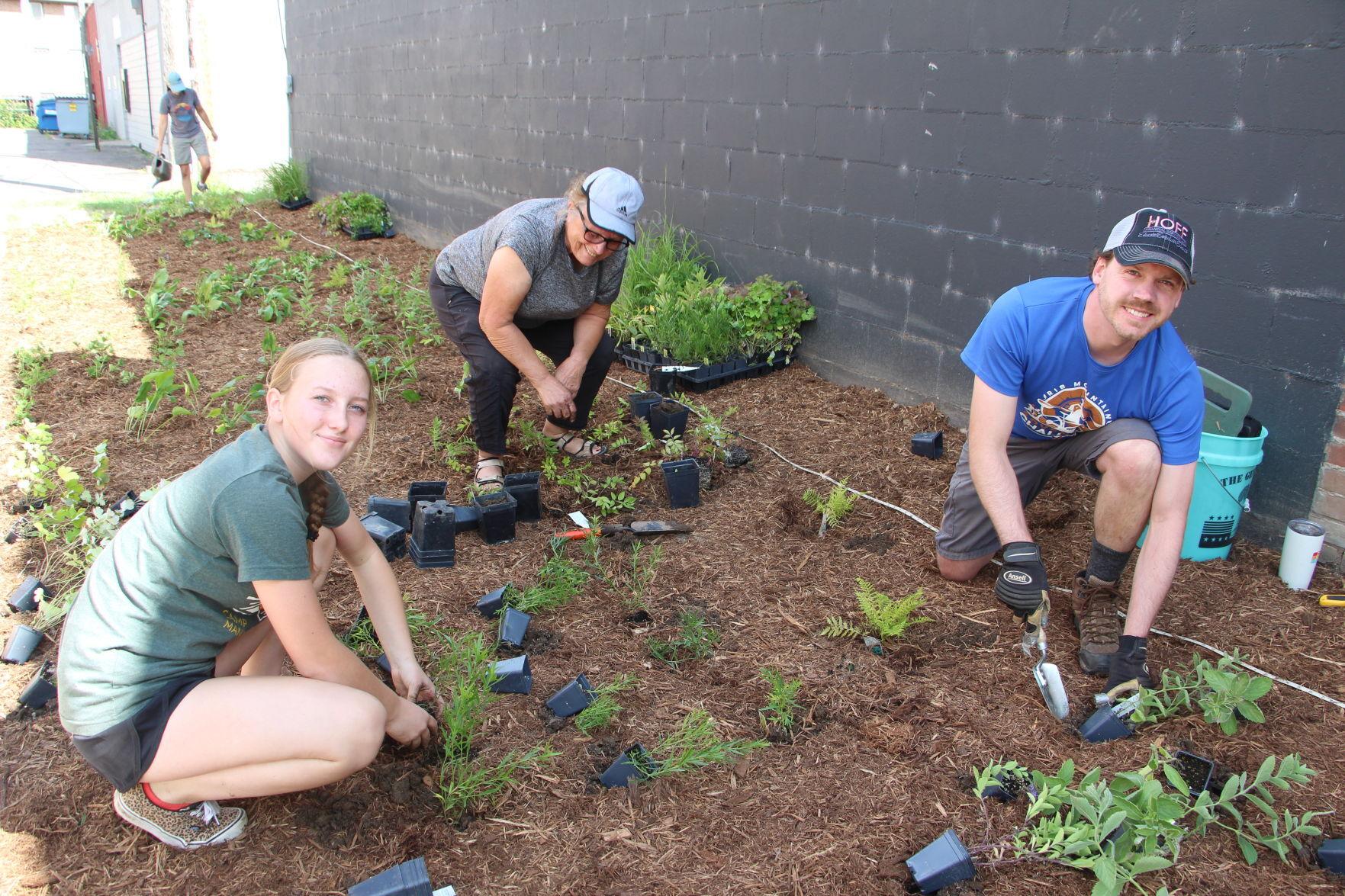 One of four projects the Rotary Club decided to back was Kim Cobb’s plan to plant a pollinator garden at the library. She said she had been driving by, looked at the area surrounding the building and thought, “This could do with some sprucing up.”

Cobb, an avid gardener, tapped Amanda Kostner, who specializes in shoreline restoration, to plan the garden. She chose a variety of pollinators, and on Friday volunteer work began in earnest to plant 591 on the 1,142 square feet of land.

The plants will take two to three seasons to reach full maturity, but Kostner chose varieties that would bloom at different times of the summer, so something should be in color all summer. And one native plant will grow to be 5 to 6 feet tall, giving the garden some height. 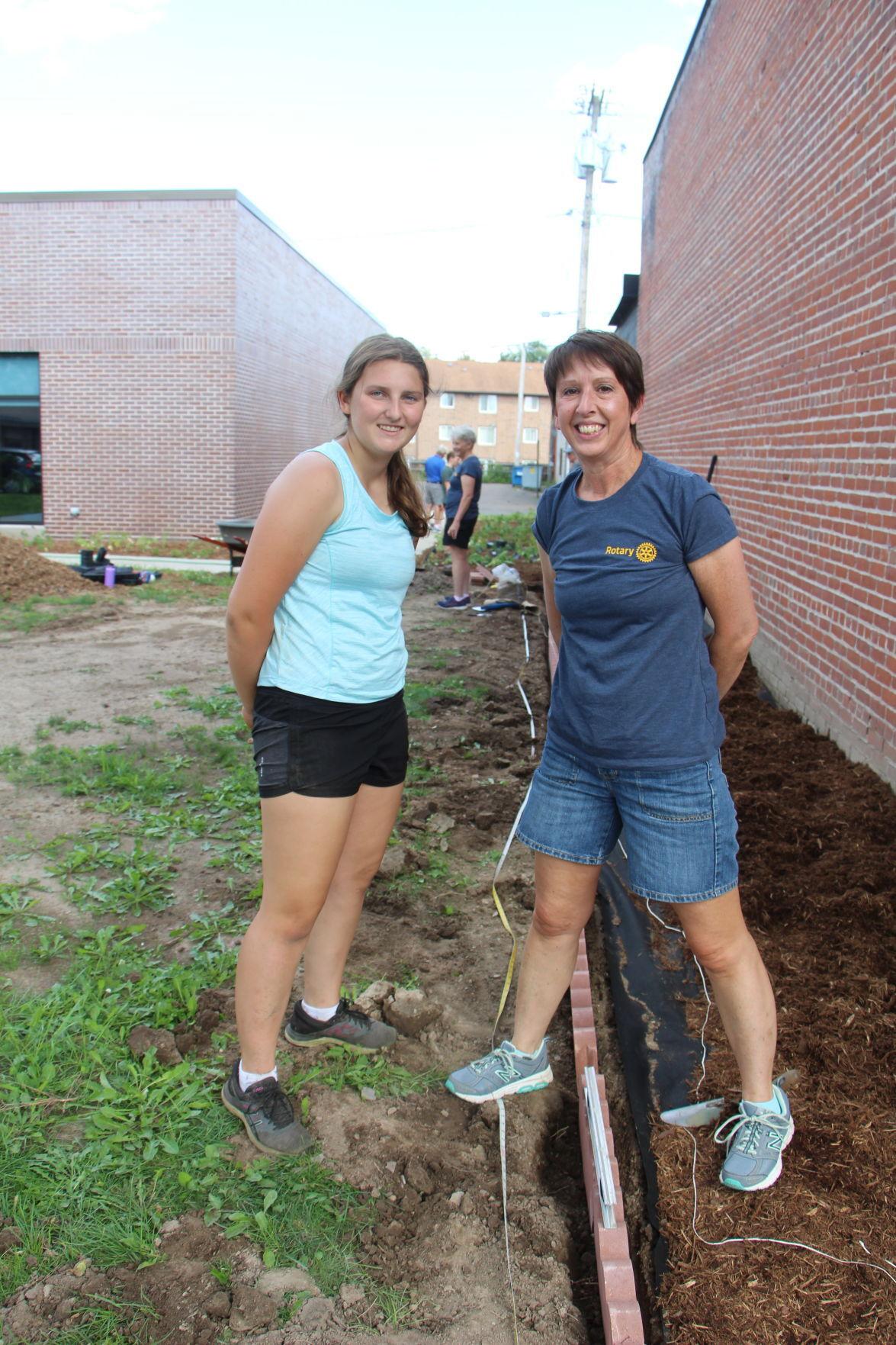 The Engstroms stopped by the library Friday to see Kostner, Cobb and Claire Parrish, the library’s public services director, hard at work with Rotary volunteers Ellyn, Ava and Marlene Gargulak, Ryan Urban and Barb Ritzinger prepping the garden and planting the perennials.

Norm Engstrom said they were happy to give the money to the Rotary Club and thrilled by the plans for the pollinator garden.

“I’m pleased to be able to pass the money on to them because they do great work,” he said.

Margaret Engstrom added the couple had been fortunate to be friends with the Friesses for more than 70 years and have the opportunity to pass donations along to the Rice Lake community.

Once the garden is installed, the library plans to reseed the courtyard with grass and place brand-new picnic tables and signs explaining why pollinator plants are important to the environment, Parrish said. The outdoors area will be devoted to library programs and community use.

Kostner said the Rotary Club has committed to maintaining the pollinators, and Cobb said the project reflects several of the causes Rotary International backs, including environmental and educational pursuits.

Other funds for the project came from a Rotary District 5060 grant, a donation from the Barron County Sunrise Rotary Club and the Rice Lake Public Library.

Free
featured
What to do when exposed to COVID-19

For people who have been exposed to COVID-19, it is important to understand how the disease is spread in order to know what to do, especially as the number of new cases continues to climb each week.

Barron County Public Health reported on July 26 a total of five new cases over the previous week. The following week there were 24 new cases, and then 41 were counted on Aug. 9.

On Monday, the number of new cases reached 77, and 18 of the patients had been fully vaccinated. So far 20,829 Barron County residents have received at least one dose of the vaccine, representing 46% of the population.

COVID-19 can start from two to 14 days after a person has been close to someone with the illness. Most people will start to feel sick in three to five days. People who are infected can spread the illness up to two days before showing symptoms.

This is why Barron County Public Health asks people who have been in close contact with someone who has COVID-19 to stay home or quarantine. Close contact means they were within 6 feet of someone for 15 minutes or more over a 24-hour period.

For people who have not been vaccinated, there are three possible quarantines: seven, 10 and 14 days. A 14-day quarantine is considered the safest for the community. Some people may be eligible for shortened quarantines: seven days with no symptoms and a negative test on day six or seven, or 10 days with no test and no symptoms. With both shortened quarantines Public Health asks people to always wear a mask, stay 6 feet away from others, and stay home and get a test if any symptoms start for the full 14 days. If possible, stay away from people in the household, especially people who are at higher risk for getting very sick from COVID-19.

People who have been fully vaccinated do not need to quarantine after close contact with someone who had COVID-19 unless they have symptoms. Fully vaccinated people should get tested three to five days after their exposure, even if they don’t have symptoms. They should also wear a mask indoors in public for 14 days following exposure or until their test result is negative.

More is learned about COVID-19 every day. As more in learned, COVID-19 recommendations change. Go to cdc.gov or dhs.wisconsin.gov or call 211 to learn more.

Vaccines are available Monday-Friday at the Government Center in Barron. Call 715-537-5691, ext. 6442, for more information. People can also call their doctor or clinic to schedule an appointment for a vaccine. Many pharmacies in the area are also offering free vaccines including Walgreens and Walmart in Rice Lake and CVS in Barron.

All COVID-19 vaccines are completely free of charge with no insurance needed. To find a vaccine visit vaccines.gov.