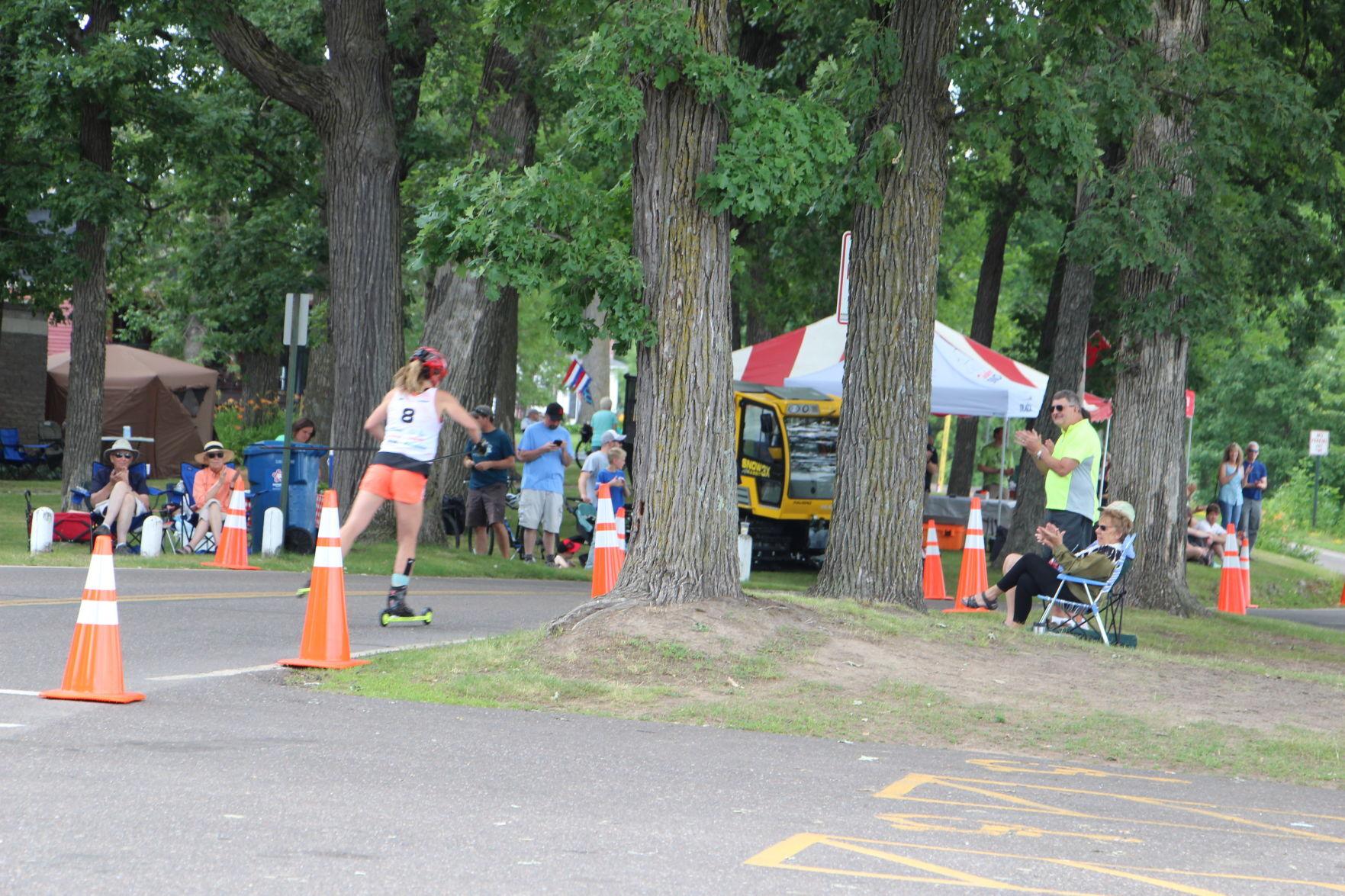 Spectators cheer on a roller skier during the Shoreline Sprints Saturday in Rice Lake. The inaugural event drew Rice Lake residents and people from outside the area to watch an international contingent of competitors. Mark and Heidi O’Connor of Savage, Minn., came to watch a skier he once coached in high school. “It’s great so far,” they said of the heats. “A great course.” Chuck and Karla Harriman of rural Rice Lake wanted to watch the skiers but had never tried the sport. “Interested though,” Chuck said. View more photos on B1 and online at chronotype.com.

In 2019 the Sawyer County Board of Supervisors was told an individual who had been in the county only for a couple of weeks and experienced a mental breakdown that resulted in an involuntary or emergency detention (ED) and long-term court-ordered commitment to Winnebago Mental Health Institute near Appleton had racked up a bill to the county for $250,000.

The supervisors questioned why the county would be obligated to pay that much for a resident, much less an individual who hadn’t even established legal residency.

“It’s like Sawyer County got hit by three tornados in one year,” Grahovac said of the unexpected financial burden facing the county.

Some costs to Sawyer County have been offset with state and federal assistance, but a good chunk of the dollars come out of county’s coffers.

Sawyer County, which offers many of the same outreach and preventive programs as other counties, may be on the extreme end when it comes to mental health bills, but other counties in the region are not that far behind. Those not experiencing the same level of obligation realize just a few individuals kept in state mental health institute at $1,174 a day and an additional $274 if emergency services are required (for a total of $1,448 a day) and they would be offering up the same question Sawyer County is asking: “How do we pay for this?”

The simple “why” counties pay for mental health services is stated in the first paragraph of state statute 51:

“It is the policy of the state to assure the provision of a full range of treatment and rehabilitation services in the state for all mental disorders and developmental disabilities and for mental illness, alcoholism and other drug abuse. There shall be a unified system of prevention of such conditions and provision of services which will assure all people in need of care access to the least restrictive treatment alternative appropriate to their needs, and movement through all treatment components to assure continuity of care, within the limits of available state and federal funds and of county funds required to be appropriated to match state funds.”

The Wisconsin Mental Health Act of 1947 created Chapter 51, according to “Wisconsin History of Advocacy and Mental Health Services for People with Mental Illness,” revised April 2017.

Obviously, not everyone experiencing mental health issues comes under the umbrella of the county, but for those who qualify for the county’s emergency health services, a service every county is mandated to provide, the county gets involved and potentially becomes obligated to pay.

Joe Bodo, mental health and alcohol and other drug addiction (AODA) coordinator for Sawyer County Health and Human Services, says part of the reason the counties accrue such high costs is the mental health system has become the default answer for society’s ills.

“You don’t realize how much of everything from day-to-day life ends up with mental health,” he said. “You got a kid at school that had a fight with one of the parents or a fight with a boyfriend or girlfriend or whatever, and all of a sudden, they’re texting somebody else that they want to die. They don’t want to be here anymore. OK, it defaults right to the mental health system. No one wants to see anything tragic happened to a young kid.”

Every county accumulates its mental health bill differently, but often it begins with an emergency detention that either results in a person agreeing to a voluntary plan of treatment or an involuntary path via a court-directed commitment at a mental health facility.

The criteria for an emergency detention require a person to be either mentally ill, drug dependent or developmentally disabled who has indicated an intention to harm himself or others and is “unable or unwilling to cooperate with voluntary treatment.”

If a private hospital with psyche ward is available, such as Scared Heart Hospital in Eau Claire, that’s good news because if the person is on private insurance or Medicaid a good portion of the bill will be covered.

However, if that same person on Medicaid is sent to Winnebago Health Institute near Appleton, Medicaid will not pick up the majority of the cost because the facility has over 22 beds and is considered an “Institute for Mental Disease, and there are restrictions on paying that date back to policies enacted to prevent warehousing people in mental institutions, a practice that ended in the 1960s.

For example, in May Sawyer County had three individuals placed in Winnebago, each costing the county $1,448 a day (or $4,344 a day for all three). Winnebago said the three do not require its acute care, but the only private option available is for $2,500 per day for each ($7,500 a day for all three). If those three individuals were to be placed in that $2,500-a-day private institute for a full year (365 days), Sawyer County would have a potential bill of $2,737,500.

Sawyer County Administrator Tom Hoff said with the county only able to levy around $11 million and having to pay $2 million to $3 million in unbudgeted mental health expenses would probably force drastic cuts.

“We’ve had discussion amongst administrators statewide on mental health issues,” Hoff said. “It’s either the top or one of the top issues for each of the counties.”

Sen. Janet Bewley of the 25th District, a Democrat whose district covers much of northwest Wisconsin, said there needs to be more funding for early intervention to prevent higher cost responses and there must be facilities located closer to the northern, rural area of the state.

To help with the financial burden, Bewley wants Medicaid to change its policies and cover the mental health cases. She also wants the state to accept federal funding to expand Medicaid, a move the state Republicans have consistently rejected for fear the state would eventually be overly committed if federal support were to dry up.

State Sen. Jerry Petrowski of the 29th District, a Republican representing Sawyer and Price counties, said the concerns of mental health care cost have been around for some time.

“About two to three years ago, there was a meeting group that I think possibly the Attorney General was trying to have a discussion about this,” he said. “And they came up with a plan that would create six or seven regional centers (what he calls the “long-term solution”) where these people could be put to get the treatment that they need.”

The short-term solution, he said, is getting funding to counties via a “grid or a formula” where “the responsibility for the county would be up to a certain dollar amount.”

Petrowksi isn’t as certain as Bewley that a Medicaid expansion would necessarily result in sending more dollars to counties to cover mental health care costs.

Editor’s Note: This article is the third in a series of articles on mental health written by editors and reporters among APG’s northern Wisconsin group of newspapers.

The COVID-19 vaccines are safe and effective. Nearly 20,000 friends and neighbors in Barron County have already gotten their shots. It is not too late to get one. The Community Vaccination Clinic located at UW-EC Barron County has closed but there are still plenty of opportunities to get a vaccine.

People can also call their doctor or clinic to schedule an appointment for a vaccine. Many pharmacies in the area are also offering free vaccines including Walgreens and Walmart in Rice Lake and CVS in Barron. All COVID-19 vaccines are completely free of charge with no insurance needed. To find a vaccination site, visit vaccines.gov.

“We are happy to see so many people in Barron County choosing to get their vaccine and encourage others to consider it as well,” Public Health Manager Laura Sauve said. “We understand people may have questions and encourage them to speak with their doctors or our nursing staff to help them make the decision.”

The new maps will allow people to view current COVID-19 vaccine data in different geographic areas. Geographic boundaries use location data from the Wisconsin Immunization Registry (WIR) to populate the maps based on the address an individual has on file. When comparing with the existing vaccine dashboard on the website, people may see differences in total numbers of residents who have received at least one dose and completed a series. These differences are due to addresses that cannot be validated and geocoded. Data represent all COVID-19 vaccinations reported to WIR for those who reside in that geographic area. The maps can be found on the DHS website dhs.wisconsin.gov/covid-19/vaccine-data.htm#summary.

For more information on the COVID-19 vaccine, visit the Wisconsin Department of Health or the CDC vaccine websites.