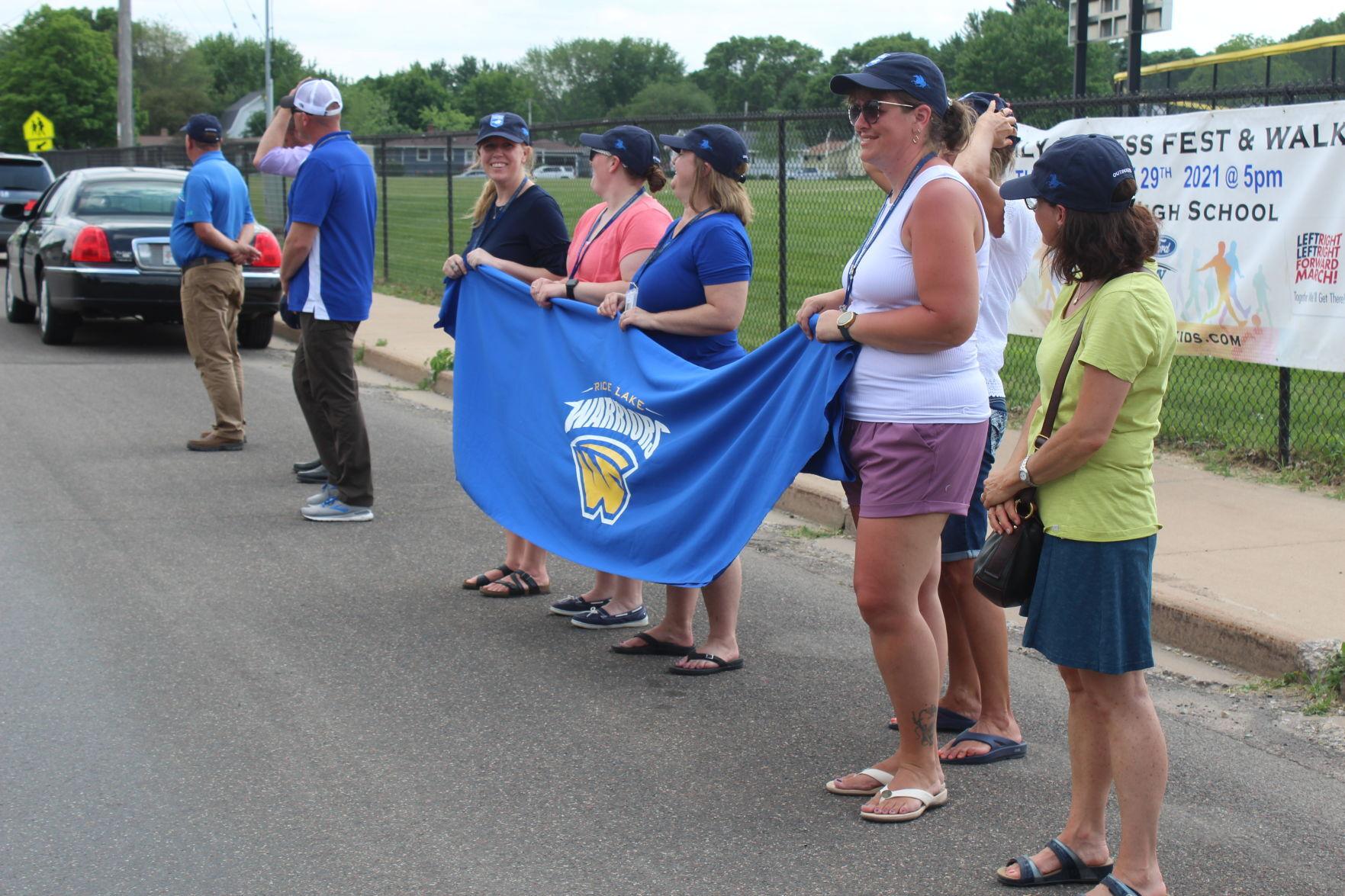 Rice Lake Area School District staff members express their appreciation for the generosity of Foster Friess as his funeral processional passes by the Friess Family Community Campus just after 3 p.m. on Monday. View more photos of the processional online at

Foster Friess, a favorite son of Rice Lake, brilliant businessman and magnanimous philanthropist, made his final journey to his hometown Monday, and people bid him a solemn farewell as his funeral processional passed by the Friess Family Community Campus at Rice Lake High School. 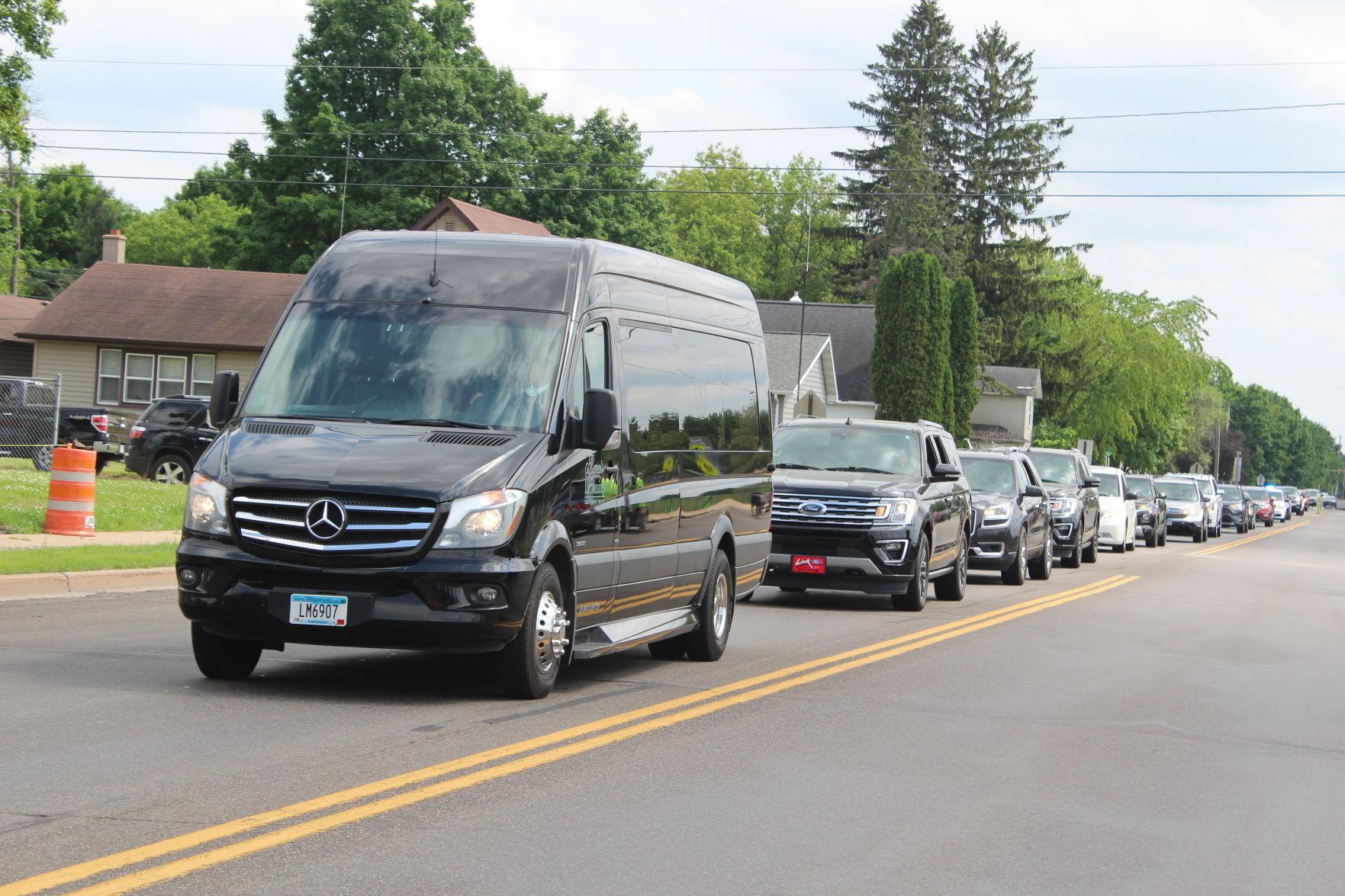 Friess died May 27 at the age of 81 after amassing a fortune as an investment manager. But his journey through life started in Rice Lake, where — among other honors — he served as class president and captain of the basketball, track, golf and baseball teams before graduating as valedictorian of the Class of 1958.

Although he eventually settled in Arizona and Wyoming, Friess never forgot his roots, visiting Rice Lake frequently and donating to the community. This legacy will live on in the hearts and minds of the people, businesses, schools and organizations that benefited from his generosity. 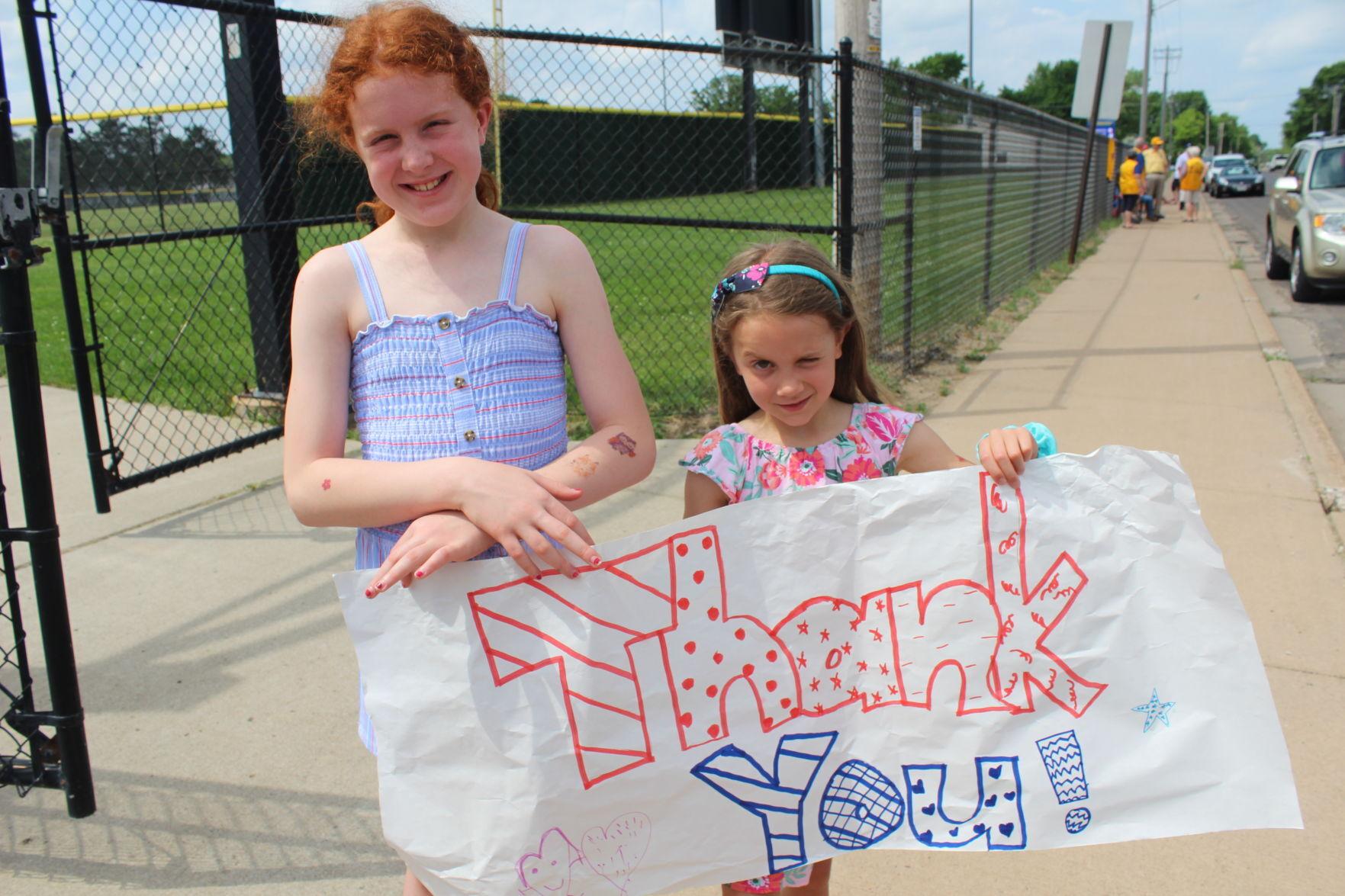 A couple of youngsters hold a sign of thanks for the generosity of Foster Friess.

Representatives of the school and Lions Club were among those who lined Wisconsin Avenue to view Friess’ funeral processional as it wound its way between Rice Lake Regional Airport and Nora Cemetery.

Friess’ generosity benefited the community and he had given the Lions a couple of major gifts, Lions Club President Sam Kochel said.

“We in turn gave that back to the community,” he said.

Rice Lake High School Athletic Director Tim Lipke stood with other members of the school staff before the gates of the Foster Friess Community Campus, to which the Friesses had donated $500,000 for its construction. Lipke said it was a great day to honor and recognize Friess and his family.

“We were awfully fortunate to have him in our lives and a part of our school community,” Lipke said. 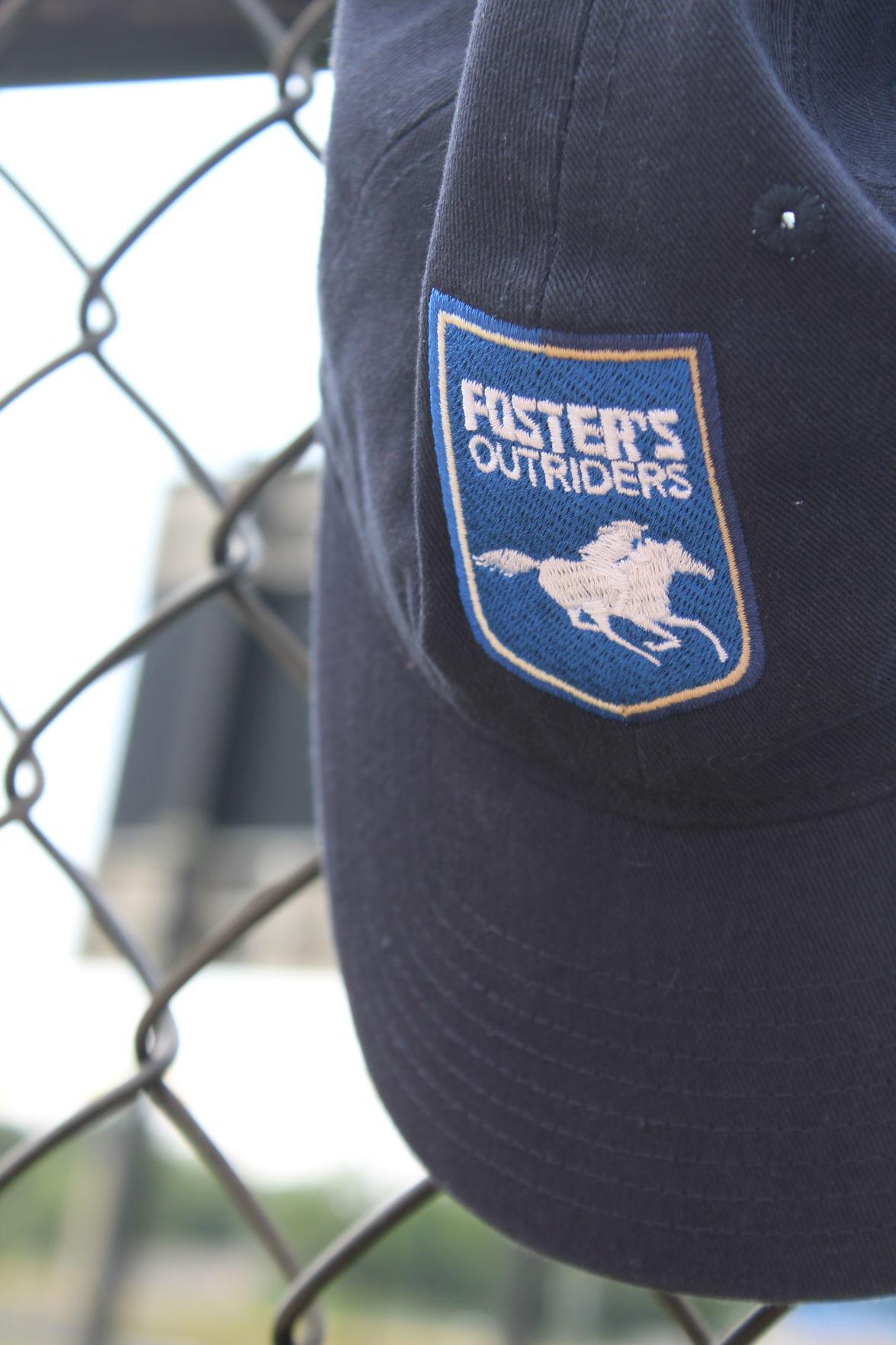 Hats for Foster’s Outriders adorn the fence outside the Friess Family Community Campus as well as the heads of Rice Lake Area School District staff members.

Rice Lake School Board President Keven Jensen said it was a day to show appreciation for a man who gave so much to the community and school district, “even in ways that most of us don’t even know.”

“You met him once, he knew who you were,” Jensen said.

People standing before the Friess Family Community Campus waved and smiled at the family as the processional passed by, silently expressing their gratitude. 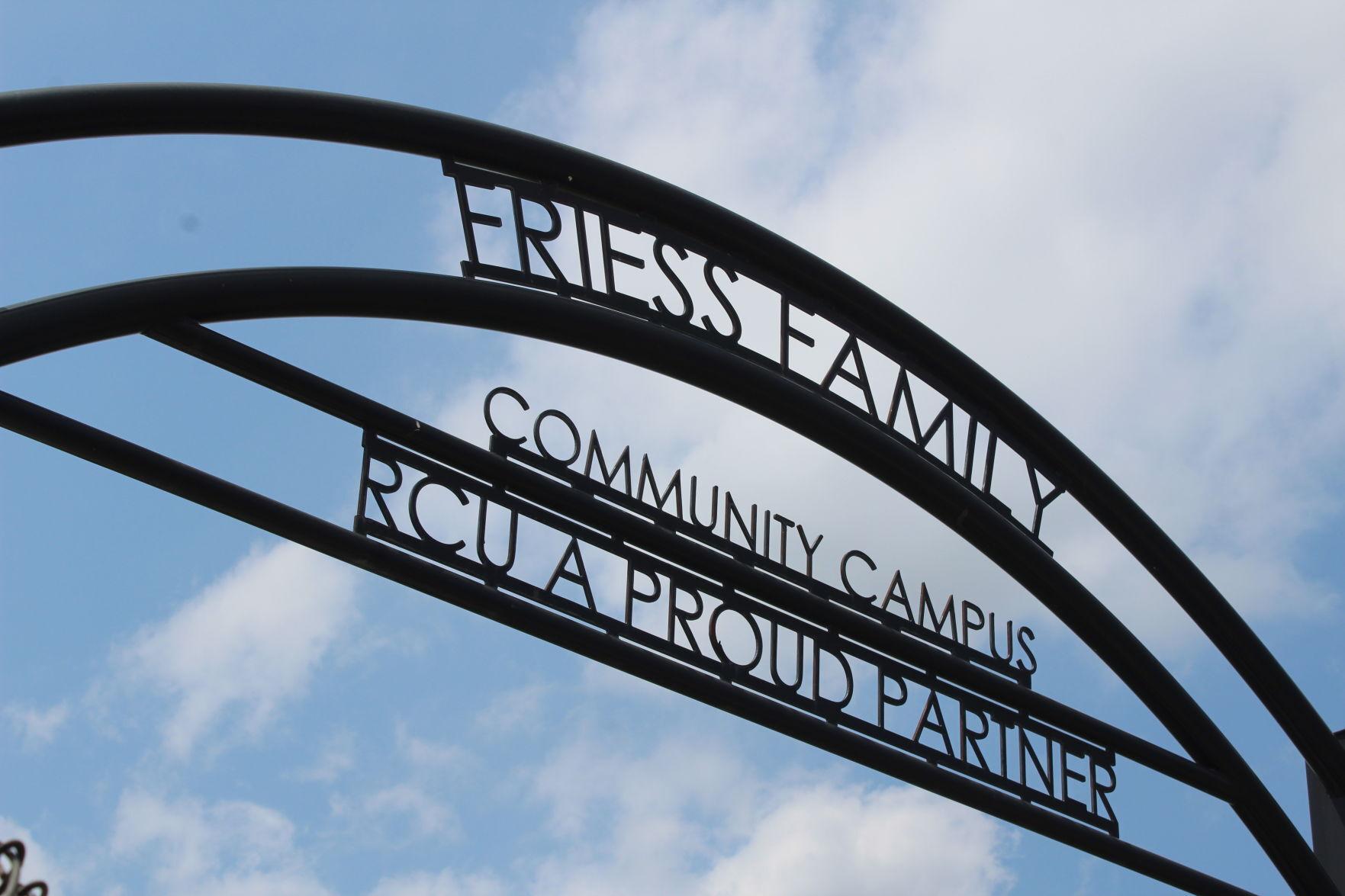 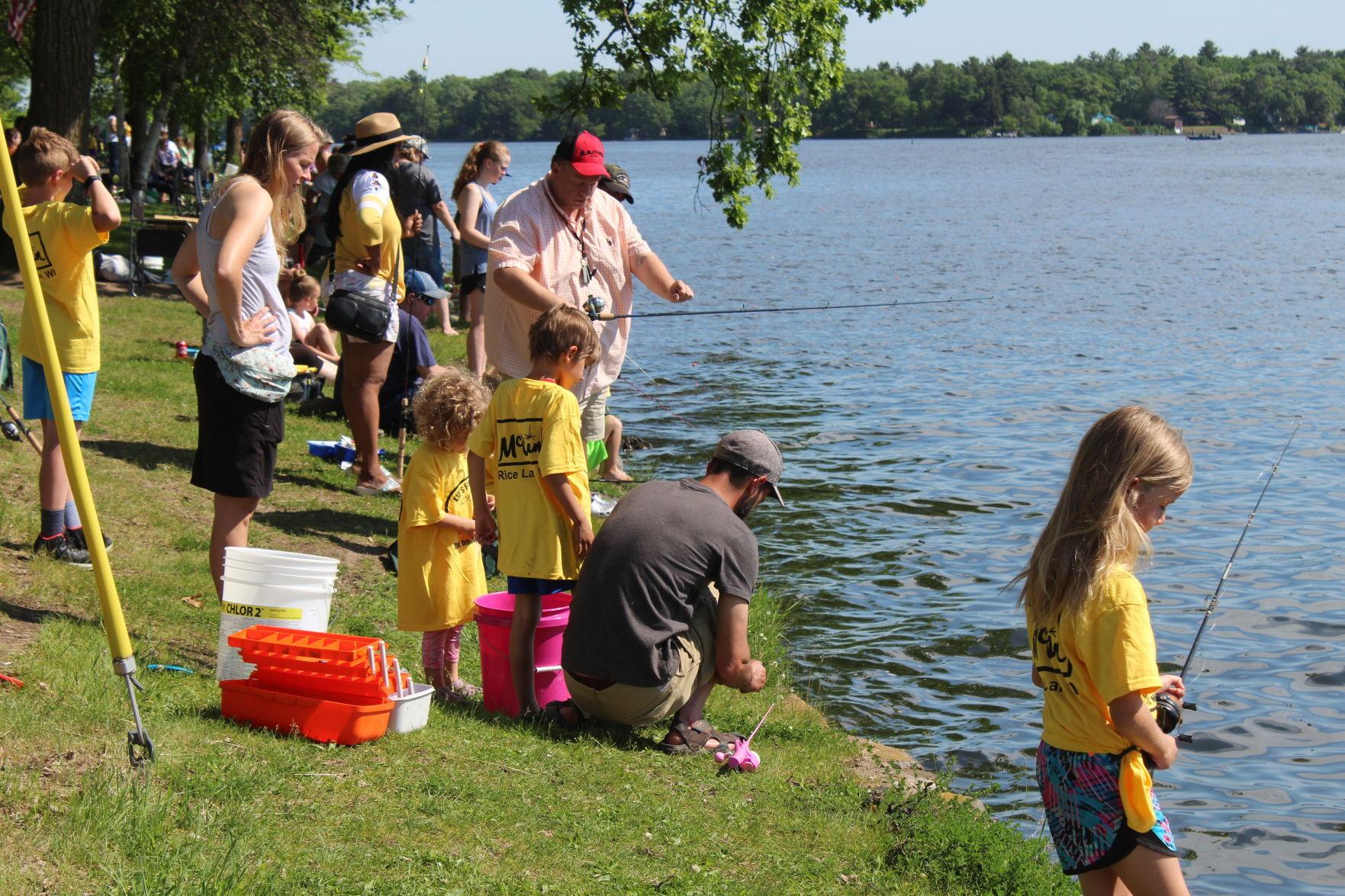 . View more photos plus moments captured at Camerama and the Barron County Dairy Breakfast on Page B7 and in the Early Bird Weekender.

Aquafest 2021 got off to a kid-friendly start over a hot, sunny and breezy weekend with the Kiddie Parade and Kids’ Fishing Derby on Saturday in Rice Lake.

Fourteen patriotic units in the Kiddie Parade made the trek from Lakeview Dental to Veterans Memorial City Park on Lakeshore Drive on a beautiful Saturday morning.

At the end of the journey the kids in the parade joined youth lining up in droves to register for the Kids’ Fishing Derby. Everyone receives a prize in the derby, said a representative of the Rice Lake Area Men’s Club. All kids had to do was catch a fish, stand next to someone who caught a fish or look like they wanted to catch a fish to get coupons.

Drawing prizes included fishing rods and a couple of bicycles.

Coming up next on the fun-filled Aquafest docket is a trio of concerts featuring big-name talent Chris Kroeze on Thursday, Lita Ford on Friday and Lonestar on Saturday. 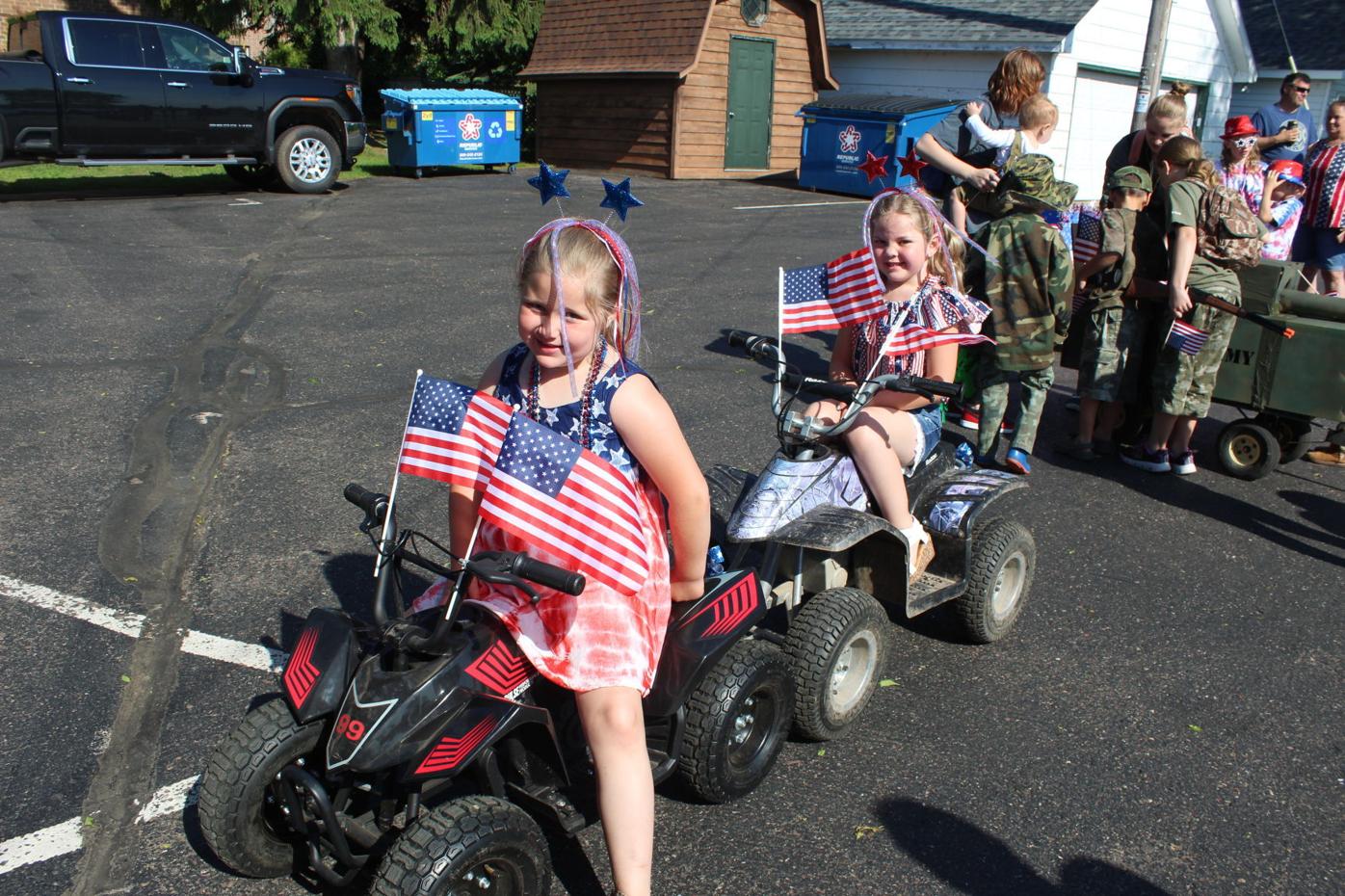 Ava Workman and Aspen Marshall await the start of the Kiddie Parade. 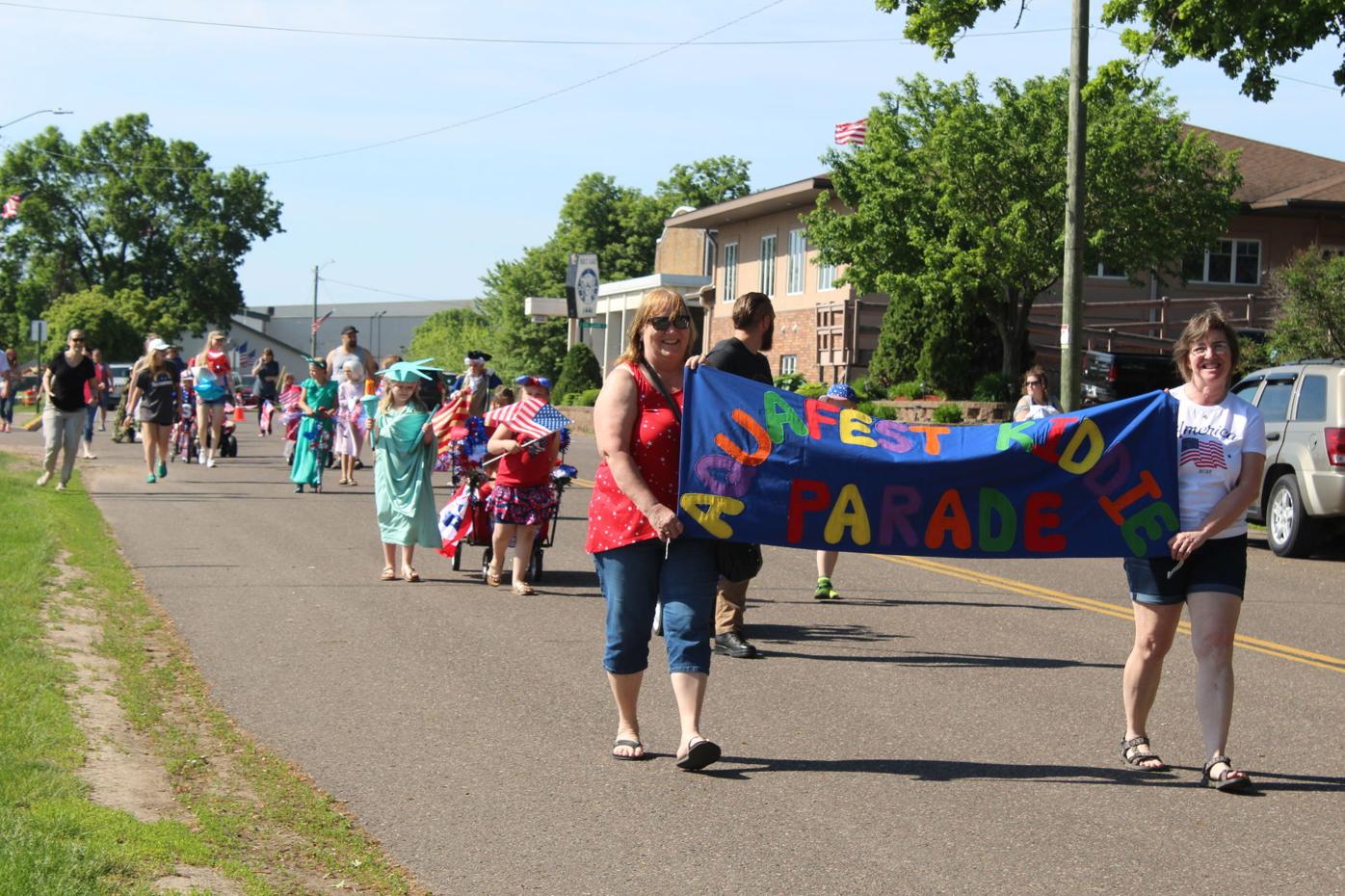 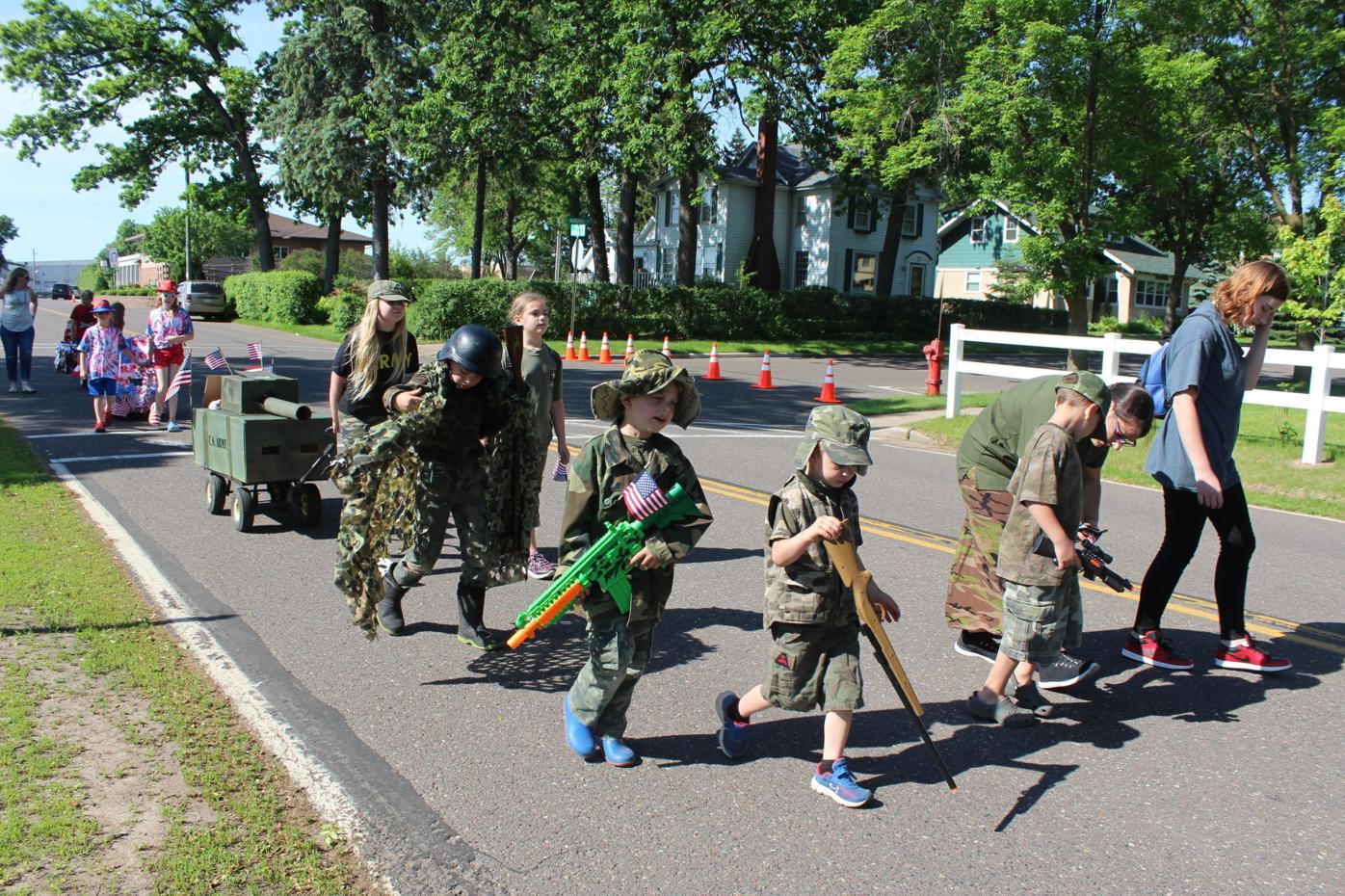 A platoon of junior members of the U.S. Army marched its way down the parade route. The unit included youngsters Eternity, Kalie, Levi, Lilly, Abel, Landon, Zachary, Amy and Caleb. 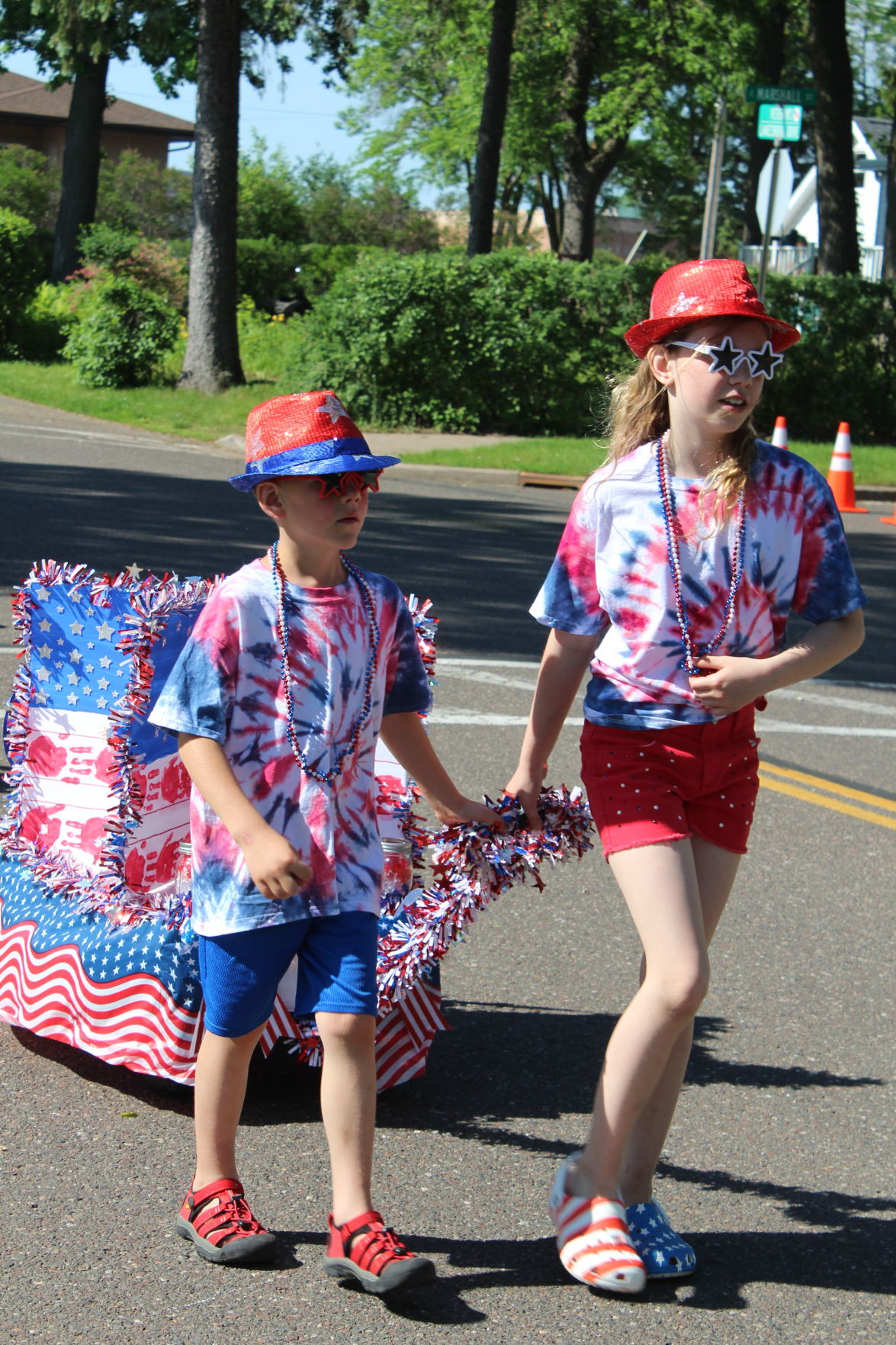 Alex and Khloe Ward’s “Old Glory” unit made plenty of use of the red, white and blue. 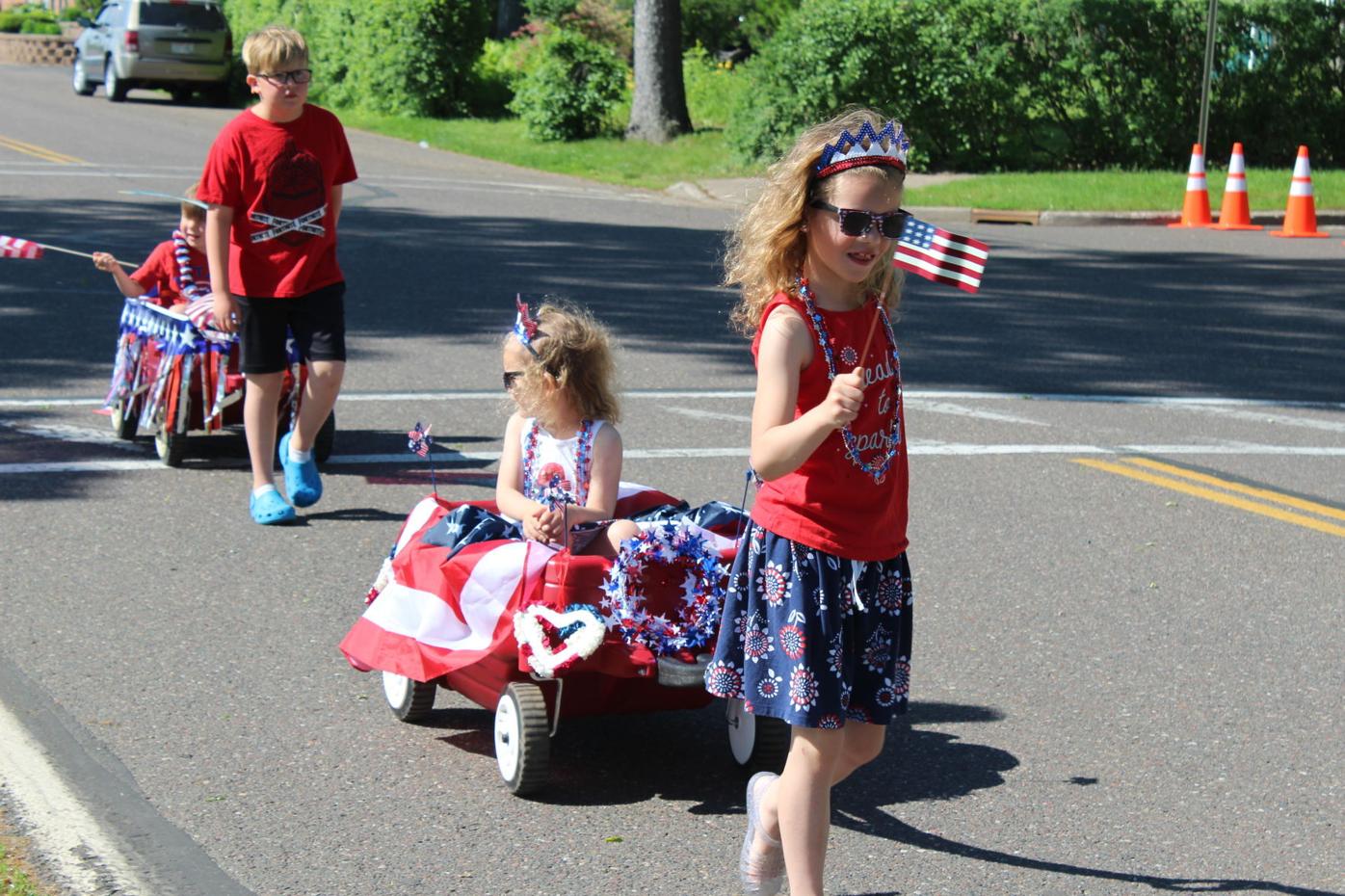 Kennedy Drew pulled Harper Drew in a wagon down the parade route. 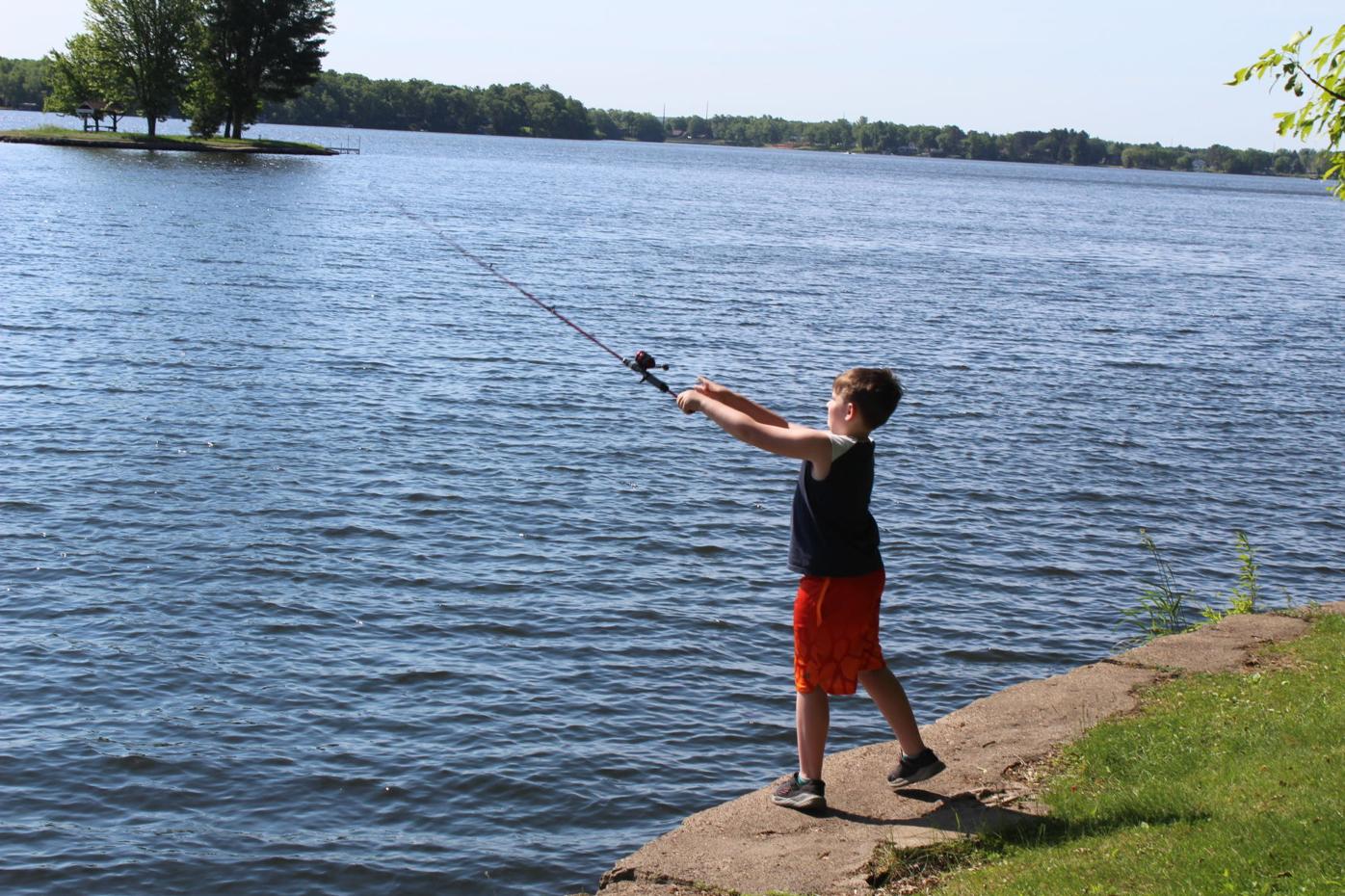 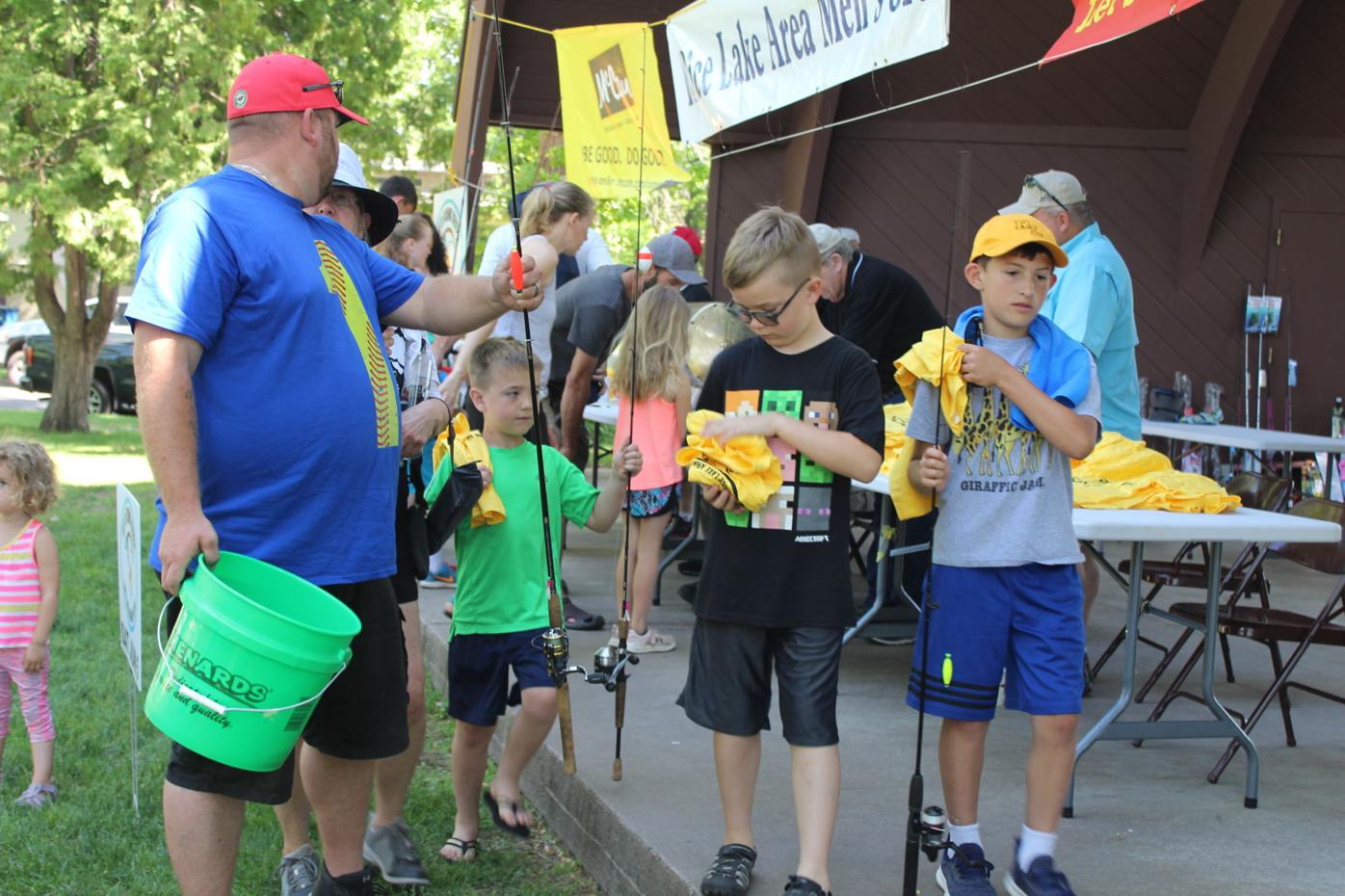 Easton and Damon Lucas along with Parker Rodewald get ready to fish after registering for the Kids’ Fishing Derby Saturday on Rice Lake along Lakeshore Drive near Veterans Memorial City Park. 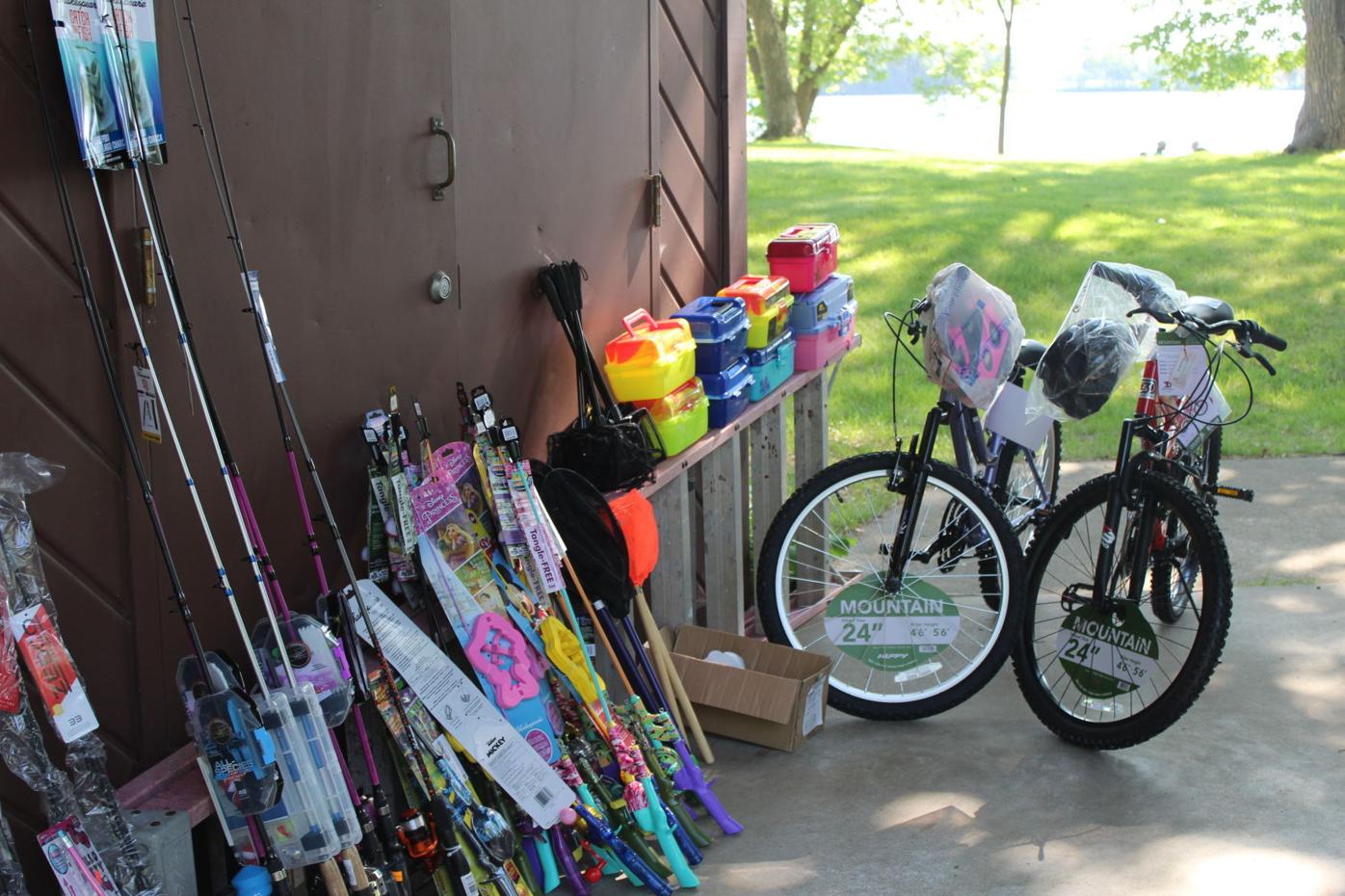 Scores of prizes awaited young anglers Saturday thanks to donations to the event hosted by the Rice Lake Area Men’s Club. 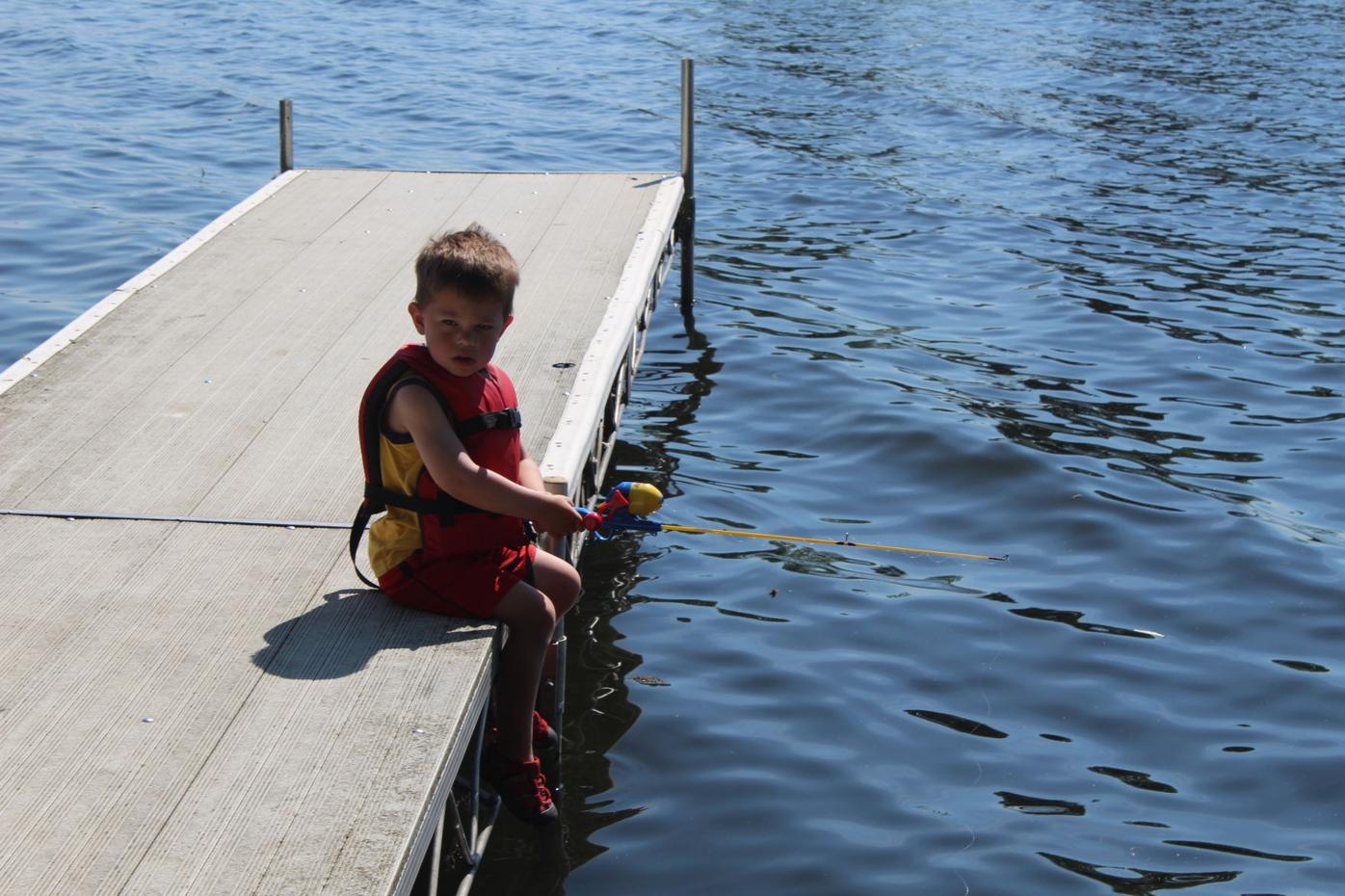 Young Melvin Henkel fishes from a dock during the fishing derby.

Ava Workman and Aspen Marshall await the start of the Kiddie Parade.

A platoon of junior members of the U.S. Army marched its way down the parade route. The unit included youngsters Eternity, Kalie, Levi, Lilly, Abel, Landon, Zachary, Amy and Caleb.

Alex and Khloe Ward’s “Old Glory” unit made plenty of use of the red, white and blue.

Kennedy Drew pulled Harper Drew in a wagon down the parade route.

Easton and Damon Lucas along with Parker Rodewald get ready to fish after registering for the Kids’ Fishing Derby Saturday on Rice Lake along Lakeshore Drive near Veterans Memorial City Park.

Scores of prizes awaited young anglers Saturday thanks to donations to the event hosted by the Rice Lake Area Men’s Club.

Young Melvin Henkel fishes from a dock during the fishing derby.

The Rice Lake Police Department said traffic will be affected at certain times Thursday through Sunday in the city.

Main Street from Water Street north to Messenger Street will be closed to traffic due to Aquafest events from 6 p.m. to 1 a.m. on Thursday, Friday and Saturday.

The public is reminded that an alternative route may be used via Allen Street, Wisconsin Avenue and Knapp Street.

Also, Main Street from Allen to Knapp streets will be closed from 11:30 a.m. to 3 p.m. on Sunday to make way for the Aquafest Parade led by Grand Marshals Duke and Marlene Thurs.

Twenty-four felony charges recently were tacked onto two felony charges filed in October against the manager of a Rice Lake manufactured home business that shut down in May 2020 while reportedly owing thousands of dollars in home deposits.

Christopher Holman, 34, of Altoona, was charged in Barron County Circuit Court on June 1 with 17 counts of theft by contractor in various amounts, four counts of issuing worthless checks, and three counts of fraud in regard to income tax returns. The charges were filed just over a year after A-1 Homes abruptly closed its doors.

The Barron County Sheriff’s Department launched an investigation into A-1 Homes after several people reported that they had made down payments to the company to buy mobile or manufactured homes but had not received their money back after it closed without notice, the criminal complaint filed Tuesday said.

According to corporation documents filed with the state, the business is owned by Gloria Holman, the complaint said, but her son, Christopher, manages the operation.

The complaint outlined 17 total transactions where individuals ordered homes through A-1 Homes and made a down payment, one of which was as high as $45,000 although most landed in the $5,000 to $10,000 range, but then never received the home they ordered or a refund.

Special Agent Loreen Glaman of the state Department of Justice, Division of Criminal Investigation, reviewed the company’s bank transactions and noted the deposits and withdrawals. The complaint said the defendant made payments to himself and sometimes his mother, as well as to credit card and credit services companies, after down payments were deposited.

According to state statute, as a prime contractor the defendant was required to hold all funds within a trust for the purpose of paying expenses related to the property. During the investigation, Glaman did not find any appearance of a “trust” account associated with the business.

Investigators also interviewed representatives of Commodore, the business that builds the manufactured homes A-1 sold.

A-1 Homes was a dealer for Commodore, which basically served as a subcontractor, the complaint stated. Several checks the defendant had made to Commodore had been returned for insufficient funds.

On May 13, 2020, an employee for A-1 Homes said she arrived to see model homes on the lot being disassembled by Commodore to take back due to nonpayment. The complaint said Commodore’s total loss was $827,311.95, exclusive of interest and other fees, for homes it had delivered to A-1 but never received payment for.

The state Department of Revenue also conducted an investigation into income tax filings. According to the complaint, a review of bank statements showed the defendant was paid more than was reported on his W-2 in 2017, 2018, 2019 and 2020. The investigation also showed that he received payment from the company in the form of personal expenses.

Holman is slated to make an initial appearance on the recently filed charges on June 16 before Judge James Babler. He also is on the court docket for a three-day, 12-person jury trial beginning July 7 on the two theft by contractor counts filed on Oct. 8.