Barron County Sheriff’s Department Detective Mary Dexter presents Melanie Carey with a symbolic check for $1,000 for the St. Croix Valley Sexual Assault Response Team. Dexter was named one of WLAX/WEUX’s First News at Nine’s Remarkable Women and was given the money to distribute to a nonprofit.

She’s indeed a remarkable women, agrees a television station, co-workers at the Barron County Sheriff’s Department and her family.

WLAX/WEUX deemed Mary Dexter, a 43-year veteran of the Sheriff’s Department who works on sexual assault cases, a Remarkable Woman, aired a story on her on First News at Nine and presented her with $1,000 to give to a nonprofit of her choice at a ceremony held Thursday at the Barron County Justice Center.

The FOX-affiliated news station celebrated Women’s History Month in March by highlighting local women who have made remarkable contributions to their communities.

Dexter’s daughter, Emily Anderson, nominated the detective, citing her service to the community in law enforcement from her beginning days as the first female dispatcher/jailer for Barron County through her promotions to patrol deputy and then detective.

The nomination made an impact and propelled Dexter to the top of the list. The TV station aired a story about four women during March, and Dexter appeared on the March 30 broadcast.

In the story, Anderson led off by saying, “My mother has always been a great role model as a woman … She has always emphasized that to those who have been given much, much should be expected. If you’re capable of doing it, there are people that need your help.”

Dexter said working on sexual assault cases might be something that many of the other officers would like to avoid if possible.

“However, I think that for me, each one there is a potential that I can help someone to bring out their story, be empowered maybe by coming forward about what happened, and maybe give them some peace of mind or a sense of justice for what’s happened,” Dexter said. “But I don’t want them to be defined by that only, I really want people to have a good future.”

Not many officers choose to investigate sexual assault cases for as many years as her mother, Anderson said.

“It’s not common, and it’s not common for a reason,” Dexter’s daughter said. “It’s hard on a person. And she has handled that in a way that is unmatched.”

Dexter’s husband, Bill, who had worked for the Sheriff’s Department, said she can be fierce and independent, but also understanding and soft-spoken when need be.

“When they say the police motto, to protect and serve — that’s Mary to a T,” he said. “Protect and serve, and overwhelmingly very humble in what she does.”

Thursday, friends, family and co-workers congregated to watch Mary Dexter present a symbolic check for $1,000 to Melanie Carey of the St. Croix Valley Sexual Assault Response Team. According to its website, the agency provides forensic health care and advocacy for individuals of all ages who have experienced sexual assault, strangulation, human trafficking and sexual exploitation, and provides proactive education programs in the community.

Bill Dexter took a moment after the check presentation to thank his wife for putting Barron County on the map and her co-workers for their contributions because they do something positive every day.

The investigator beamed while thanking her family, and co-workers past and present, saying she appreciated working with such people and a beautiful community.

“I’m thankful for this award,” she said.

Her boss, Sheriff Chris Fitzgerald, said the award was fabulous and the detective has made a difference in children’s and people’s lives.

“She’s really truly for the victims of Barron County, and we appreciate that and need that in today’s law enforcement,” he concluded. 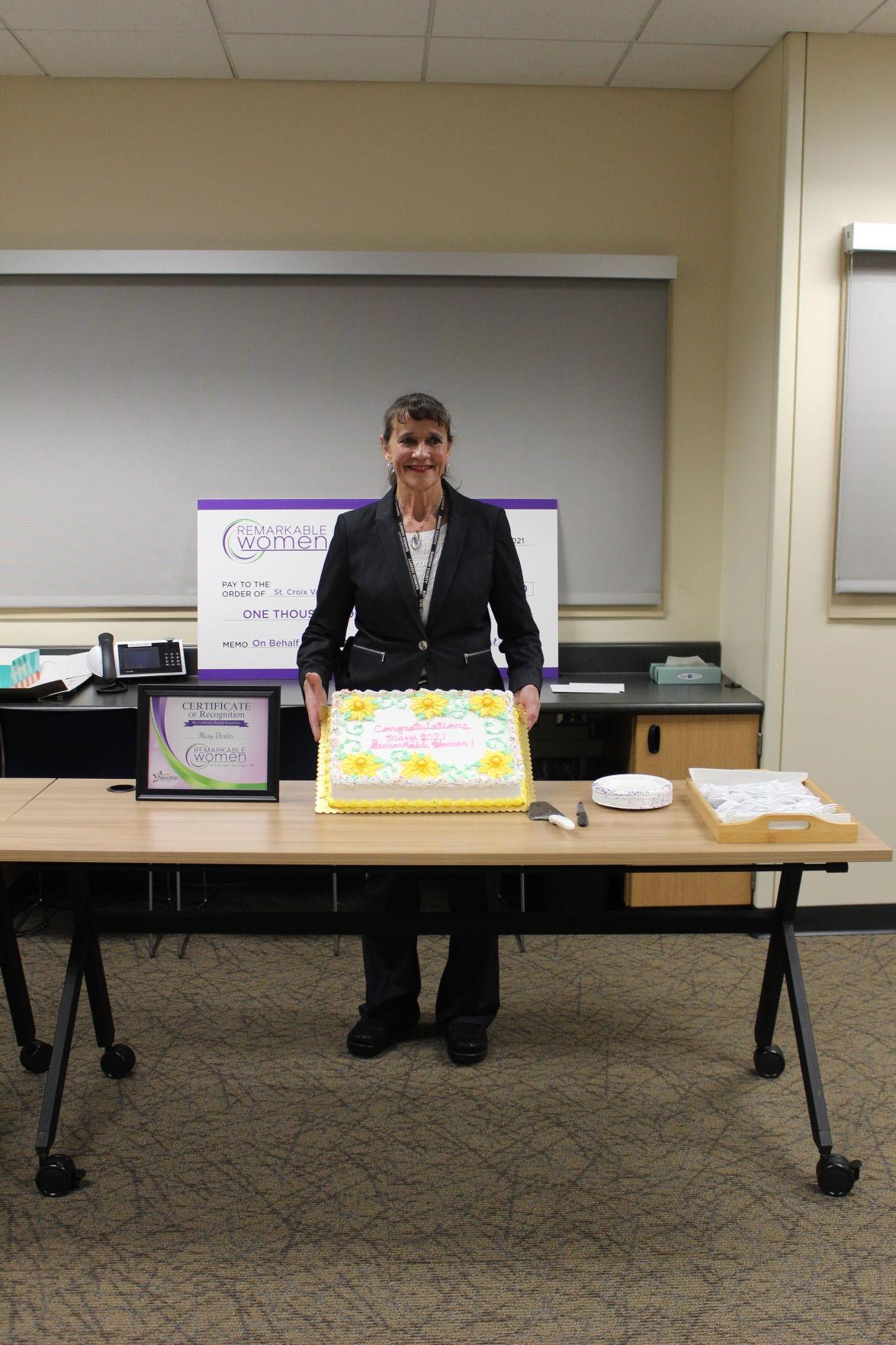 Barron County Sheriff’s Department Detective Mary Dexter poses with her cake at a celebration of her being named a WLAX/WEUX’s First News at Nine Remarkable Woman.

Paywall
featured
Rice Lake homeless shelter is so much more

Benjamin’s House Emergency Shelter has a play area for the children.

A common area in Benjamin’s House, which sports a view of the lake, gives residents a place to kick back, relax and interact.

There but for the grace of God go I.

In other words, fate can be fickle and drop a bombshell even on those who think they hold their future firmly in their own hands. But a severe illness, loss of a job or any number of misfortunes could result in the loss of a home — and homelessness is a problem in the Rice Lake area.

To address the situation, a group of people from Barron County private and public organizations began to meet monthly in 2009. A couple of years later Benjamin’s House Emergency Shelter was born, and with its 10-year anniversary recently under its belt, it has come to the aid hundreds of homeless.

Trauma is the primary root cause of someone coming to the shelter’s doorstep in need of a roof, food, safety and support, Executive Director Lori Zahrbock said.

“The stories that you hear from people are based on their past trauma,” she said. “Then it turns into substance abuse, mental health, domestic issues, someone comes out of jail, comes out of prison, or they have burned bridges with their family and have nowhere else to go.”

“We set them up with a case plan they can follow, and they set goals, and we work with them to meet those goals,” Zahrbock said.

During their stay, which can last up to 90 days, residents work with a case manager, who helps them find jobs and develop life skills depending on their needs. Most need the full 90 days because it can take a few weeks to adjust to their new circumstances, another few weeks to find jobs and take interviews, and another three weeks once they’re hired to get their first paycheck.

With a lack of affordable housing in the area, finding a new place to live also poses a challenge. And that sky rockets if the resident has come to Benjamin’s House with a criminal history or other issues that put a black mark on rental applications.

Nevertheless, last year 70% of the shelter’s residents left with a home and a job to call their own.

The shelter also helps the residents learn life skills, such as budgeting and organization, so they are better prepared for living away from the shelter.

Meanwhile, up to 24 residents — men, women and children — can enjoy amenities at Benjamin’s House, which has 16 rooms, most of which are dormitory style while a few cater toward families and have bunkbeds instead. There are a couple of common rooms, an indoor play area for the children, a pantry stocked with donated food, a shared kitchen, and on-site laundry.

Donations from Barron County communities make this all happen.

Three years into operation, Benjamin’s House went through a bad patch and its survival was not ensured, Zahrbock said. But the shelter worked closely with area churches and the Sisters of St. Joseph of the Third Order of St. Francis. The shelter is actually named after a former Mother Superior Mary Benjamin and the convent, which owns the building, gives it ongoing support.

Zahrbock came on board six years ago just as the shelter was getting back on its feet and watched it get through the magic year five. Most nonprofits need to get through the five-year mark and then they usually have a steady stream of people who believe in the cause, she said.

“When I came on board then were slowly building up again,” Zahrbock said. “Since then we’ve had really great support from the community.”

Board President LaVonne Thompson especially pointed to the Sisters of St. Joseph, who were at the table from the very beginning.

“The whole community has generously supported Benjamin’s House,” she said. Zahrbock concurred, saying the majority of funding comes from individuals, businesses and fundraisers. Except for accepting some money from the state to deal with COVID-19 concerns, the shelter doesn’t take government dollars.

Despite great community support, Benjamin’s House still faces challenges, Zahrbock said. It’s sad when someone comes for shelter but doesn’t want to stay or make changes to their lives. Another is listening to the stories and not be able to find a program for help. This especially strikes those with mental illness as few mental health services exist in this area.

“The rewards are watching someone be able to walk out the door and have a place to live and hearing them come back and say I’m sober for a year,” Zahrbock said. Or “I got my kids back.”

The shelter has started a “continue care” program to support former residents by providing security deposits and rent for a short time. The executive director said a recently departed resident just bought a car and got her own driver’s license reinstated.

“She was so proud of herself and thankful for the assistance we gave her,” Zahrbock said.

The executive director applauded the 10-year anniversary of Benjamin’s House. The shelter reduces the amount of panhandling and the number of people sleeping under bridges. Homelessness is a problem in the area, she said, citing people living in their cars in parking lots, sleeping in 24/7 laundromats in winter to stay warm, or camping. The community knows homelessness is out there and it could happen to anyone.

“We could all be one pay check away from that which devastates us emotional or physically,” she said.

Deputies from the Barron County Sheriff’s Department along with the Wisconsin State Patrol, Department of Natural Resources, Rice Lake Police Department and the Barron/Rusk Emergency Response Team responded to the scene.

Phone contact was attempted with no response so the armored vehicle was used to approach the house. A male subject was taken into custody, without further incident, and is being held in Barron County Jail. A female in the residence was also located, interviewed and released.

The case remains under investigation and charges are expected to be filed.