The Polk County Health Department announced Tuesday the first death of a county resident from COVID-19.

"This person is believed to have had a workplace exposure to the virus through employment in Minnesota," according to a press release from the health department. "The individual was initially tested on April 16 and passed away on May 18 at a Twin Cities hospital."

The department stated, "COVID-19 is still in our communities and physical distancing and other public health recommendations should be followed to the fullest extent possible."

All 11 confirmed cases of COVID-19 in Barron County have recovered and are out of isolation.

The recoveries were announced Monday by the Barron County Department of Health.

For all of Wisconsin, the past 2 weeks has seen the percentage of positive test results stay below 8.5%.

Statewide cases of COVID-19 were at 12,885 as of Tuesday afternoon.

Complications from coronavirus have killed 467 people in Wisconsin.

American Veterans Post 888 member Bill Patton sets a flag at a US service member's grave on May 18. Local veterans groups and volunteers have placed 1,100 flags in 11 cemeteries for Memorial Day.

UWEC-Barron County and the rest of the University of Wisconsin System plan to have campus open to students this Fall, albeit with some changes.

System President Ray Cross told the Board of Regents this month, "We will be back in session in fall. How we deliver that, it won't be normal. It will be different."

On May 6, UW Eau Claire Chancellor James Schmidt announced a Fall Planning Team will be formed to get Eau Claire and its Rice Lake branch ready for Fall 2020.

The team will consider COVID-19's impact on health management, campus living and student life, academics and high-impact practices and the campus environment and infrastructure.

COVID-19 has caused higher education around the country to move to online courses which was resulted in financial losses due to things like refunded housing and parking fees from students sent off-campus, and the loss of ticket and concession fees from canceled sporting events.

The University of Wisconsin System is expected to lose $212 million by the end of the summer semester, and UW-Eau Claire, which includes the Barron County campus, is expected to be out nearly $10.3 million.

The System hopes the financial loss will balance out to less than $100 million with the help of $47 million in Federal aid and budget cuts.

Cross told the Board of Regents that campuses will have to make short-term cuts and long-term plans on cutting staff and consolidating course offerings to make ends meet.

The Eau Claire branch announced on May 14 it will be freezing all nonessential travel, reducing operating costs by 33% and furloughing employees.

UWEC Chancellor Schmidt had announced furloughing 222 employees, which would save more than $500,000, but upped that last week to include all faculty and staff beginning to August.

Furloughs will range from 6-12 days, but the days will not exceed one per pay period.

Schmidt, his executive staff, associate vice chancellors and deans will take a temporary pay cut of 6.5%, which is equivalent to 17 furlough days, according to the announcement.

Enrollment at Barron County is up compared to last year, Campus Director Brittany K. Nielsen said, due to the school's Launch program.

Launch allows students to use the Eau Claire campus facilities, but the students are admitted through Barron County.

Physical enrollment, students who will be on Barron's campus, is lower than this time last spring, Nielsen said.

In a bid to increase enrollment, the school is offering a free application time frame from June 5-15 and is waiving entry tests scores like the SAT and ACT.

UWEC-Barron County is hosting a virtual exploration event June 5 that will give potential students and parents an opportunity to interact live with staff and current students.

Schools around the country hope that the current distance learning courses implemented this spring do not continue into the fall, but the biggest system in the country has already decided to stay online.

The University of California System has announced its courses will be primarily online this fall but with the flexibility to meet in person as the semester progresses.

Other schools are looking at keeping in-person interaction down through schedule manipulation. The private Wisconsin institution Beloit College announced it will be sectioning each 20-21 semester in half. Instead of taking four classes at a time, students will take two intensive, 8-week classes.

In the University of Wisconsin System it's likely that 200 student lecture hall courses will be moved online and some other courses will be taught in a hybrid online-in person format.

Specific plans have not been released as the System follows the situation into the summer semester.

Tiny homes like the one pictured above are seen as a way to help people out of homelessness.

These images were provided to the City Council to show modifications of the Besse Forest products plant in downtown Rice Lake.

Rice Lake City Council voted Tuesday for city officials to return to in-person meetings, but other emergency precautions will be extended 60 days.

It is not yet known when parks and city buildings will fully reopen. City officials said details will be forthcoming, based in part by a new set of COVID-19 guidelines released by the county health department this past week.

The county is advising against gatherings of more than 10 people, and encouraging people to continue to practice social distancing measures.

Last week Barron County Public Health stated, "On May 13, the Wisconsin Supreme court overturned the Safer at Home Order. This means all rules and regulations included in the order are no longer in effect, with the exception of schools. Schools will stay closed for the remainder of the year. However, this does not mean COVID-19 is gone. At this time, there is no vaccine or specific treatment. COVID-19 still poses a significant threat to the community."

"I'd like the ability to open and close parks," said community services director Jim Anderson at Thursday's meeting.

He said closing parks could be necessary for cleaning.

Anderson said seldom used parks may take longer to open, as priority would be given to Veterans City Park, Narrows Park, Moon Lake Park and the dog park.

A motion to extend the emergency order for 30 days failed by a 4-3 vote. A motion for 60 days passed 4-3, with Mayor Mike Diercks serving as tiebreaker on both motions. One alderman seat is vacant and alderman Harlan Dodge was absent from the video meeting.

Public comment will be allowed at meetings, but only one person at time will be permitted in the Council chambers.

An ordinance for tiny homes, intended to reduce the local homeless population, was tabled by the City Council.

"These would have been ideal for us to use for quarantining," said Zahrbock, adding that the shelter has had to slow down intake of new residents.

In a letter to the Council on behalf of Coummunity Connections to Prosperity, Zahrbock stated, "With Benjamin's House continually full, we feel there is opportunity to add additional housing with use of tiny homes on wheels. These homes would be considered homemade RVs and would be parked in church green spaces to allow hook up to utilities. These homes are not meant to be a permanent dwelling for those we serve, but a temporary location to assist with getting their feet on the ground."

Currently city ordinances do not allow dwellings under 900 square feet, except in mobile home parks. Tiny homes could be permitted through a conditional use ordinance.

The City took another step toward the construction of a new water tower on the northwest side by applying for a Community Development Block Grant.

He said having adequate water pressure and supply is key to serving the northwest side, particularly health care facilities, and ensuring effective fire suppression when necessary.

Diehl also said the city's average daily use of water is projected to increase from 1.6 to 1.9 million gallons in the near future.

The Wisconsin Department of Natural Resources recommends municipalities have at least 1 day's worth of pumpage stored above ground in case of an emergency.

Rice Lake currently has 650,000 gallons of above ground storage, and the new tower would bring that total to 1 million.

The Council also moved forward on a multi-phase reconstruction of Main Street. Approved was a $3.5 million match to go along with a $13.9 million federal grant to rebuild Main Street from Evans Street to the south city limits. The $3.5 million is dependent on the grant being approved.

The project would be done in five phases from 2021 to 2026, moving from north to south.

• Representatives of Besse Forest Products reported that they have made modifications to their facility in order to reduce noise.

Residents of downtown neighborhoods have complained frequently of excessive noise from the facility. Besse listed the recent improvement as a new sound wall, equipment enclosures, sound curtains and insulated pipes. 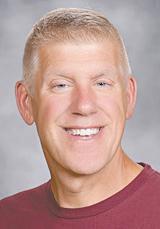 A Democrat has announced candidacy for the 75th Assembly District of Wisconsin.

John C. Ellenson, of Shell Lake, is a lifetime resident of Wisconsin, husband, father, and proud public educator, according to a press release from his campaign.

This week he released a campaign video, calling for a boost to health care, broadband access and education.

Ellenson said he has been frustrated with the events in Madison and the effect it has had on the residents of the 75th.

"Here we are in the most challenging health crisis America has faced in a century and the division amongst politicians is at a historic high. We are strong hard-working people here in Northern Wisconsin and day after day we work together for our families and friends; we need our representatives to do the same.

"We may have disagreements, however, we must find a way to build a future for our families together. The polarization of politics, culture and people is over. We need one another now more than ever. We will no longer look at what divides us, but build on what unites us. I want to represent the 75th District in Madison, find solutions in these troubled times, and unite our team to a stronger, healthier and happier future, together."

Ellenson holds a Bachelor of Science degree from the University of Wisconsin-Madison, where he was a scholar athlete and captain of the basketball team. He has a Master of Science in Education in School Counseling from the University of Wisconsin-Superior. He worked as a resource counselor in the private sector in Northern Wisconsin for 5 years prior to working in education. He was the Disabilities Support Service Advisor at UW-Superior prior to becoming a public school counselor for the past 17 years. Ellenson has had the honor to be a valuable team member whose school was awarded our nation's highest honor, the National Blue Ribbon Award at Barron's Woodland Elementary in 2016. The Wisconsin School of Recognition was awarded seven times to schools where he was a valued leader and team player.

was awarded the Outstanding School Counseling Team of the Year, by their peers at the Wisconsin School Counselors Association annual conference.

Smith said, "John has spent a lifetime working for families. The success he has had comes from hard work and being a team player. The fight for our great state of Wisconsin and the nation is why we need a leveled headed leader like John now."

Ellenson said, "I have given this decision a lot of thought, we are in difficult times, it's now more than ever we need to team up and unite. I was born and grew up in Northern Wisconsin, and I have the history and success to bring us together and lead us in this fight. I have had the honor of being on many winning teams; it's time to unite the 75th and rise together."

Dave Armstrong is running as a Republican for the seat.