Concerned about the future of the Park Falls mill property and what presumptive owner Niagara Worldwide might do with it, the Park Falls Common Council passed two ordinances Monday night intended to guard against the property becoming blighted or simply a pile of rubble.

Ordinance 19–006 grants the city oversight to the way in which buildings over 100,000 cubic feet can be demolished. By the new ordinance, the owner of such a property is subjected to permitting approval by the common council for a partial or interior demolition that would affect more than 10 percent of the replacement value of the structure. A permit would first be considered by the Board of Public Works, which is given a great deal of leeway in deciding whether to recommend approving or denying the permit.

Ordinance 19–007 works in parallel to 19–006 by requiring a property owner to apply for a demolition permit for salvaging operations. It also dictates that no commercial salvaging may take place without demolition.

The ordinances allow the city to inspect such properties at any time during regular business hours, require the property owner to carry insurance, suspend salvage or demolition operations, enforce fines and penalties for non-compliance, and seek injunctive relief by the court if needed.

“Our nightmare scenario … is somebody comes in, pulls out the things of value [and] we’re left with the structure and now we have to knock it down,” said City Attorney Bryce Schoenborn in explaining the ordinances to the council Monday night.

“[The ordinances] would require that before you get a permit for salvaging, you also have to have a permit for demolishing the building when you’re done. I have been given plenty of examples of industrial buildings in small cities in Wisconsin in the past that haven’t had the benefit of these ordinances.”

Cities given as examples included New London, Brokaw, and Manitowoc, each of which had industrial properties purchased by Niagara Worldwide president Eric Spirtas.

“We have been, for almost two decades, buying and selling age-obsolete assets [and] operating facilities,” Spirtas said to the Review on Monday. “We do repurposing of old idle, industrial assets just like [Flambeau River Papers]. We know what we’re doing. We will give more information as the acquisition matures and as we close on the property. We’re going to be working with the local authorities and the local businesses to do the right thing for the area. Getting into any other details is tough right now.”

Park Falls contracts residential building inspection with T.A.K. Inspections, but for a property required to go through the larger demolition permitting, a specialized contractor could be hired.

Some of the language of the new ordinances is based off the Department of Natural Resources model ordinances.

“This is such an issue that in 2014 the DNR created model ordinances and encouraged municipalities to take a look at doing something like this," Schoenborn said. “It’s drafted as narrowly as it possibly can be because we’re not trying to overreach but we do have legitimate concerns when it pertains to industrial salvaging.”

The council unanimously passed the ordinances, which will take effect 60 days after they are posted. 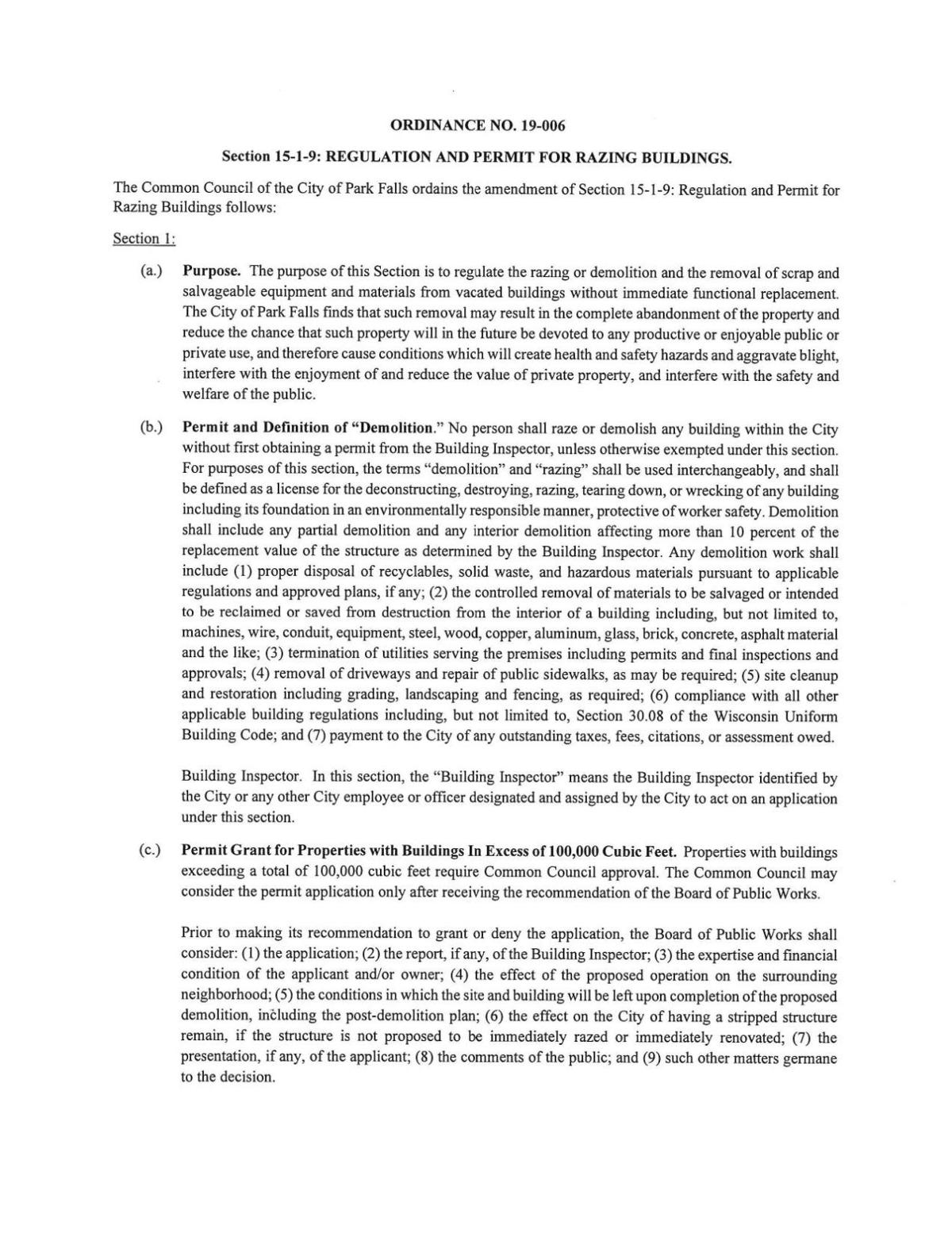