Kelly Meredith is preparing to open her art gallery and studio in Butternut this Friday. The building is split between gallery space and studio space, where she will paint her mural panels.

Art galleries and studios are not prevalent in the Northwoods, however the Village of Butternut (population 372) can now count one as a community cultural resource. Situated on 108 North Main Street, the Fanatical Fish will swing open its doors on Friday, May 22, from 5 p.m. to 7 p.m.

Even when she was a little girl, barely old enough to hold a paintbrush, the act of painting has been a passion of Butternut muralist Kelly Meredith.

“I can’t really remember when I wasn’t interested in art,” she said. “But, I think I really decided it was my calling when I was in high school - and even back then I wanted to have my own studio and gallery. Now, at 51-years-old, I am finally doing it!”

A widely known muralist, she has covered hundreds of walls with fully detailed murals designed to honor a community’s heritage, veterans, students, its architecture or the pride of just plain folks whose faces are remembered on her enormous canvasses - exhibited across the sides of buildings.

Situated in an easy to find spot on North Main, across from the sprawling, bright red Butternut Feed Mill, next to Lori’s Nook, and just down from the street from Jumbo’s Cafe, the former Smart Plumbing and Heating building is undergoing a reincarnation of sorts.

“I wanted to show that art and daily life can and should live in harmony,” she said. “But, the obvious draw is being so close to home and being in Butternut. I am an urban transplant and I love Butternut.” 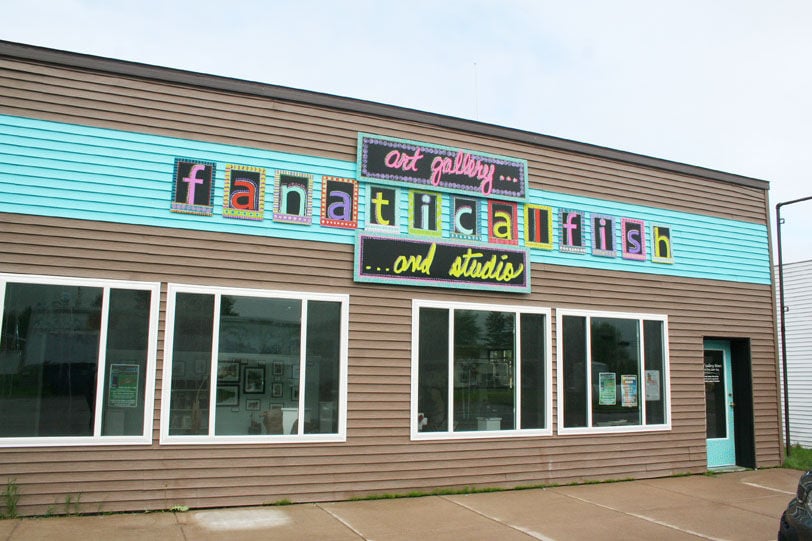 The former Smart Plumbing building has been renovated into an art gallery and studio known as Fanatical Fish. 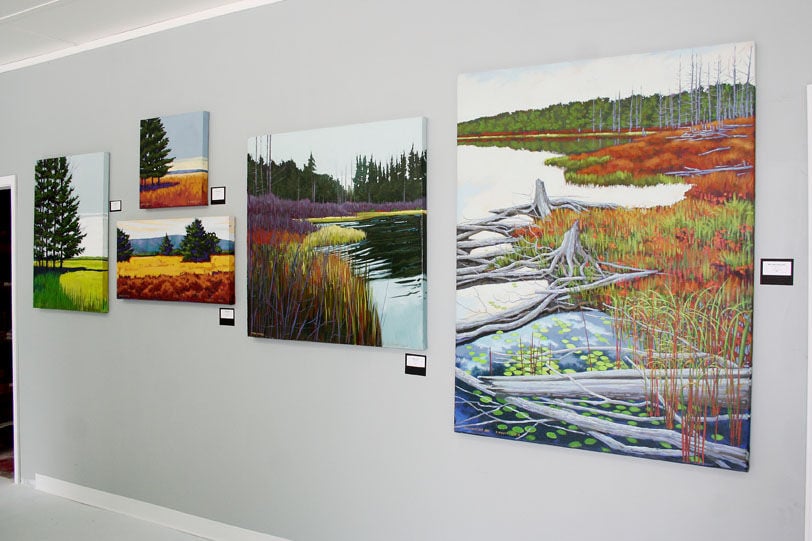 Many of Meredith's paintings are influenced by the surrounding countryside. 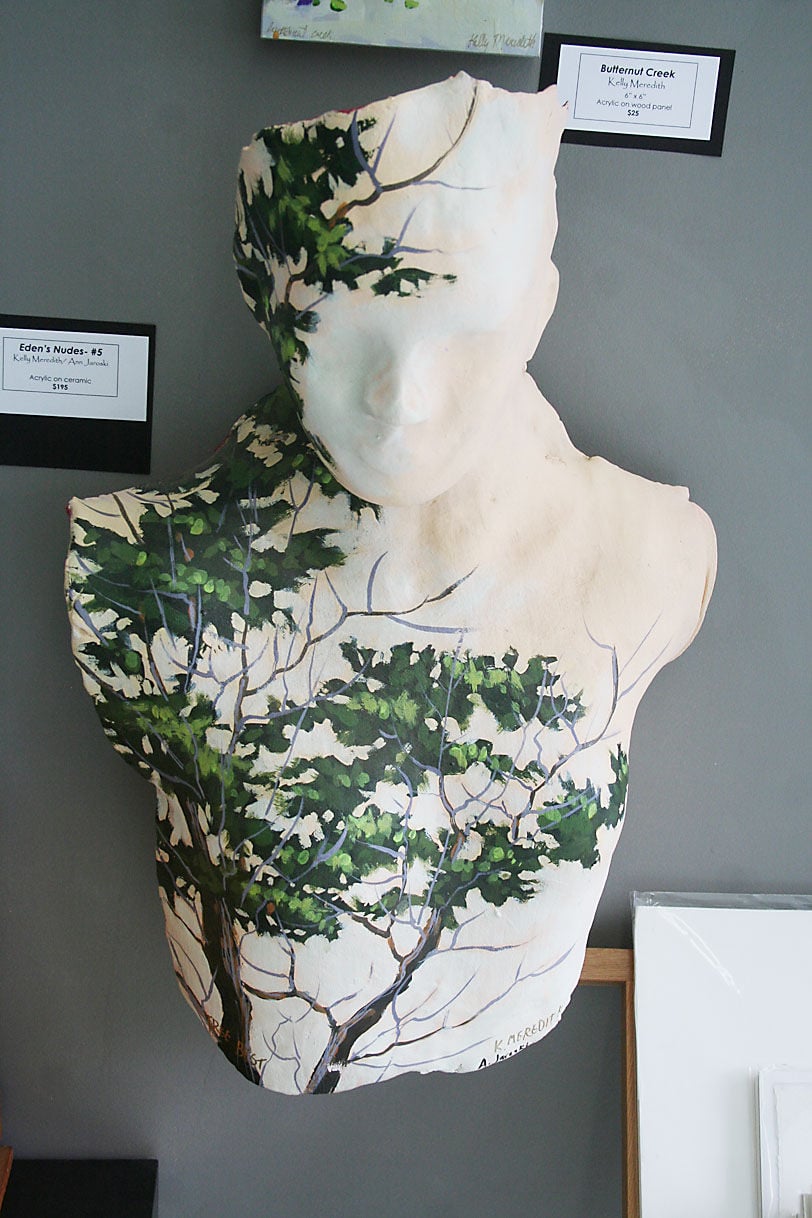 The former Smart Plumbing building has been renovated into an art gallery and studio known as Fanatical Fish.

Many of Meredith's paintings are influenced by the surrounding countryside.

Wide windows have opened up the front and a bright neon painted sign advertises its location.

Meredith said the fish theme always seemed to present itself in her early works … she liked the shape and colors of fish. When she and her husband, Jim Babler came to Butternut, they opened a silk screening business, naturally specializing in t-shirts with fish as a central theme.

“Now the fish have sort of gone away - but I am still painting,” she laughed.

Babler teaches English in the Butternut Schools and Meredith taught art for 17 years before deciding that painting was what she’d rather do.

As luck would have it, the Sesquicentennial Year brought about a grant that allowed her to be hired as the muralist for the first of its kind on the corner of an old bank that stands at Hwy. 13 and Hwy. 2 in Ashland.

“I had painted a real funky, abstract sort of mural on the side of our house down the street and that was the only experience I had - but I was lucky enough to be hired and then it kind of went crazy,” she said.

Ashland now has murals all over town and even offers guided tours through the summer season.

“There just seemed to be a wellspring of interest in murals in the Ashland community, then other people began to want to have murals in their communities and it has been kind of wild ever since.”

Her favorite mural of all - the one she considers her real classic is the ceiling mural inside the stairwell at the Northern Great Lakes Visitor’s Center.

“I like to think that I am blending Wisconsin history and its values and cultures. It worked well in that setting,” she said.

Locally, her murals can be found in Phillips, Park Falls, Butternut, and Glidden.

“I am doing a new mural for the side of the American Legion Hall in Park Falls that I am excited about,” she said.

She has murals from Virginia, Minnesota to Ligonier, Indiana.

“I used to do almost all outdoor work, but because of the distances I was working - I decided to begin painting on panels. It allows me to work indoors and the quality of the work as far as durability goes is much improved,” she said. “I can also be more productive because I don’t have to worry about dealing with the weather.”

She uses regular house paints for her artistic renderings and then covers the panels with a coat of clear protective sealer so the life of the murals is far longer.

“The first one in Ashland is now beginning to peel after being applied in 1988, but most of the peeling is being caused by the bricks cracking and getting older,” she said.

The aluminum panels are painted in the back portion, or studio section of her new building and then installed on the exterior walls.

Murals have been central to her work and mostly because of her own interest in creating art that is accessible to all.

“It can be enjoyed every day - every time you drive by,” she said.

The front portion of her building offers space for her own art and creations of her friends.

Meredith also paints landscape canvases which mostly capture area scenery, including a scene of a creek from Peeksville Road or views of Newman Springs, the Powell Marsh, and other local landscapes.

She is hoping that she will be able to offer space to artists whose work she likes and also begin to offer classes and workshops and space to others who would like to offer classes too. Her longer range and broader plan is to attract others to open their own shops.

“If you have one place of interest for visitors to come to, then it is a natural draw for others,” she said. “It would be great to have a potter or weaver or some other artists come to Butternut and get a nice little artist community going here. I think it would encourage visitors and it would attract more artists to their own spaces where they could show their own work.”

Meredith said she understands those are big plans and yet - for an artist that can take on the entire side of a building - certainly doable.

After Friday’s opening the hours will be Friday, Saturday and Sunday from 10 a.m. to 2 p.m. There will be other flexible hours offered from Tuesday through Saturday and the gallery can be open by request.