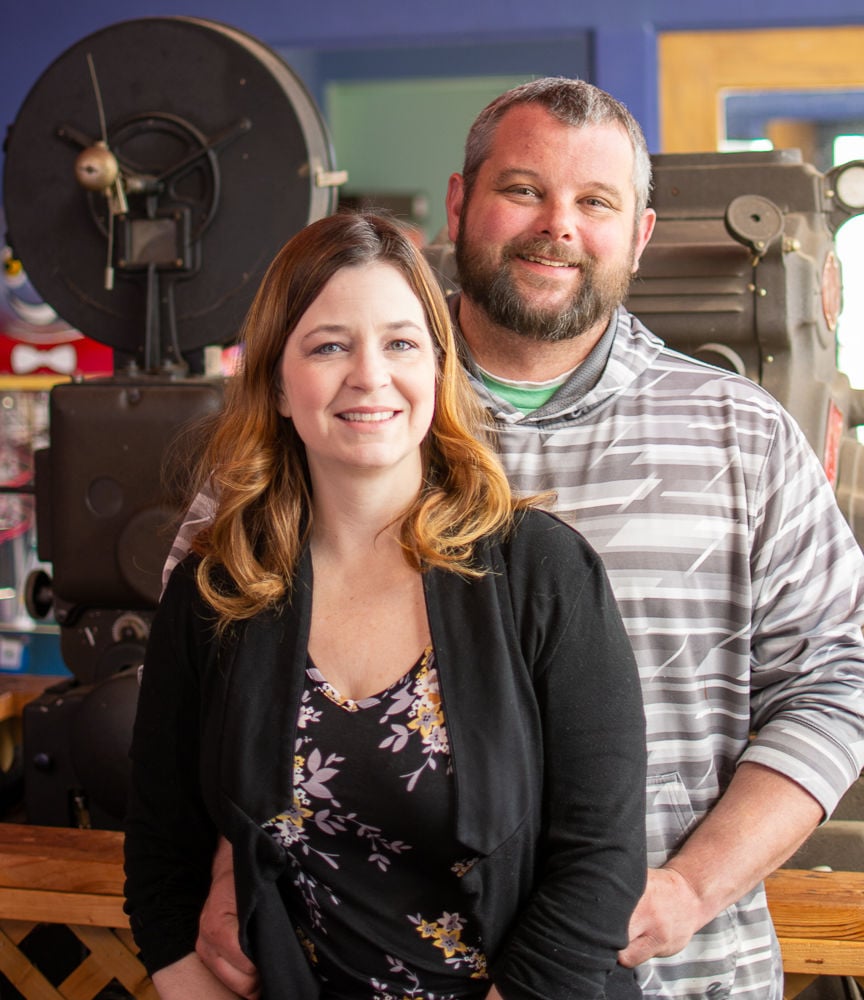 Katie and Paul Freiburger stand in front of the original film projector at the Park Theatre in downtown Park Falls. The Freiburgers closed on the theater Feb. 28 and are in the process of renovating the 70-year-old building before reopening to the public. 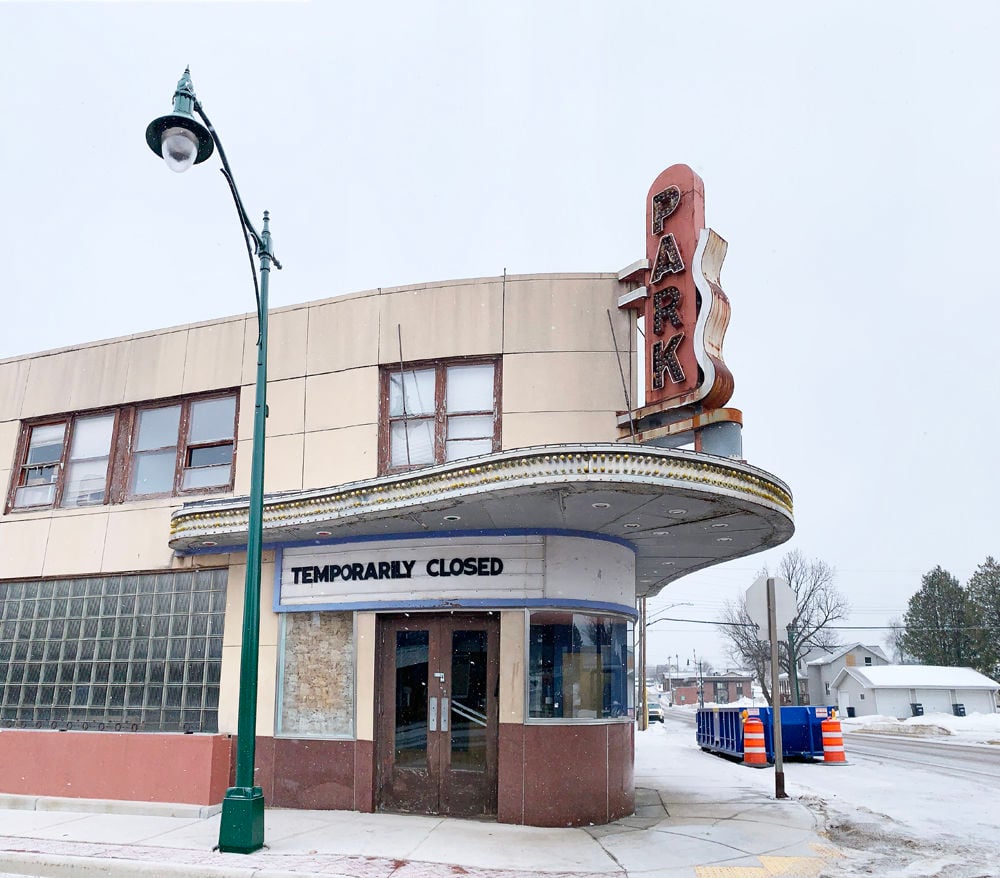 A longtime fixture of downtown, The Park Theatre is located on the corner of First Street N. and Second Avenue N.

Katie and Paul Freiburger stand in front of the original film projector at the Park Theatre in downtown Park Falls. The Freiburgers closed on the theater Feb. 28 and are in the process of renovating the 70-year-old building before reopening to the public.

A longtime fixture of downtown, The Park Theatre is located on the corner of First Street N. and Second Avenue N.

Paul and Katie Freiburger and their five kids like movies. Paul says his favorites are Good Will Hunting and the Rocky films ... well, most of them.

And some of Katie’s favorite memories with the kids are at a movie theater that served dinner in Anchorage, Alaska.

"I would always reserve a booth for me and the kids and then you’d order your food, and they’d bring it out during the movie,” she said. “And now that they’re older, they still remember it, and they’re like ‘yeah, that place was the best.’ So that’s one of the things I was really excited about when Paul came home and was like ‘let’s buy a theater.’”

Paul made the suggestion just over a month ago, and as of last week, the Freiburgers are the proud new owners of the Park Theatre in Park Falls.

As Paul describes it now, he wasn’t exactly on a hunt to buy a movie theater, he just wanted to make an investment in a city that he sees turning itself around.

“The town’s renovating and putting money back into itself,” he said. "If the town’s going to start doing something, then I want to be a part of that.”

Already a business owner as the proprietor of Night and Day Construction, Paul consulted Sam Pritzl, commercial loan officer at Forward Bank, for ideas on where he could invest. After briefly considering the Park Mall, the Frieburgers took a look at the theater. It was love at first sight.

The couple made an offer almost instantly, and things haven’t slowed down much since then.

First and foremost, movie showings will likely see big changes under the Freiburgers’ plans, with the addition of weekend matinees, earlier weeknight showtimes, and ideally more than one movie showing any given week, if everything goes as planned.

“We want to try to work out our times a little bit better to help out our families with younger kids because we know what it’s like,” Katie said.

They have plans to offer a menu a bit more substantial than popcorn and candies, including hotdogs, brats, and other food that can be made without a full kitchen. This summer, they plan to get a liquor license that will allow them to serve beer and wine.

There will also be some rearranging inside, including the installation of dining booths along the sides of the auditorium, and moving the concession and food area into the main lobby, rather than directly in front of the entrance doors. Instead, the entrance will feature theater nostalgia, including the original film projector.

“We plan to keep it all retro,” Paul said. “We’re going to keep most of it the same, but new windows, new doors, new flooring. This place has a lot of history, it’s just hiding.”

They plan to include comedians and music groups in their offerings, ideally once a month, and also plan to reach out to the school and Northwoods Players to offer their stage for additional performance space.

“These kids work all year to do a Christmas show, and they do it once and they’re done. So it would be fun to do it here and I don’t think the parents would mind having a drink and watching their kids,” Paul said.

They also thought there may be room to donate a portion of proceeds back to school programs that use the theater.

“We want to be able to utilize the stage that we have,” Katie said. “Any type of community events, we’re open to ideas if there are other programs out there, absolutely. We want to get people through the door because this building is really cool. And the history is really cool.”

Katie said the history of the theater itself is one of the most appealing parts of the business to her. Not only has she been in close contact with the most recent previous owners, Jim and Kathy Billek, but also family members of the original owners, the Esterl family.

The theater was originally built in 1948, following a fire that wiped out six businesses that previously stood on that block. According to a Park Falls Herald report from that time, it was “the worst conflagration to strike this city in over 30 years,"

A week after the fire, the Herald carried a story announcing the Esterl Amusement company would start constructing a “modern, fireproof theater and office building ... built of granite, stone, and concrete that would be named the Park Theater” (sic).

The theater later passed to Pete and Marge Esterl, who ran the business for a number of years before closing. Jim and Kathy Billek purchased the business and reopened it in June 1996, after it had been closed for years.

A Park Falls native, Katie said she remembers the days when there was no theater in town.

Comments on social media and people around town have made it very clear they want to keep the movie theater in Park Falls, says Paul.

"We’re excited to have it just for ourselves, let alone all the excitement from Facebook and just walking around town, everybody seems pretty amped up,” Paul said. "It’s been very rewarding so far.”

The couple hopes to start screening films in 4-6 weeks, with additional improvements coming piecemeal throughout the warmer months and all updates finished by the end of the year.

“It’s nice to know we have the support, not only from the bank but also the mayor and the whole city,” Katie said. "Everyone’s just been super helpful. It’s nice to know everyone wants to keep the theater alive. They want to see it keep going.”