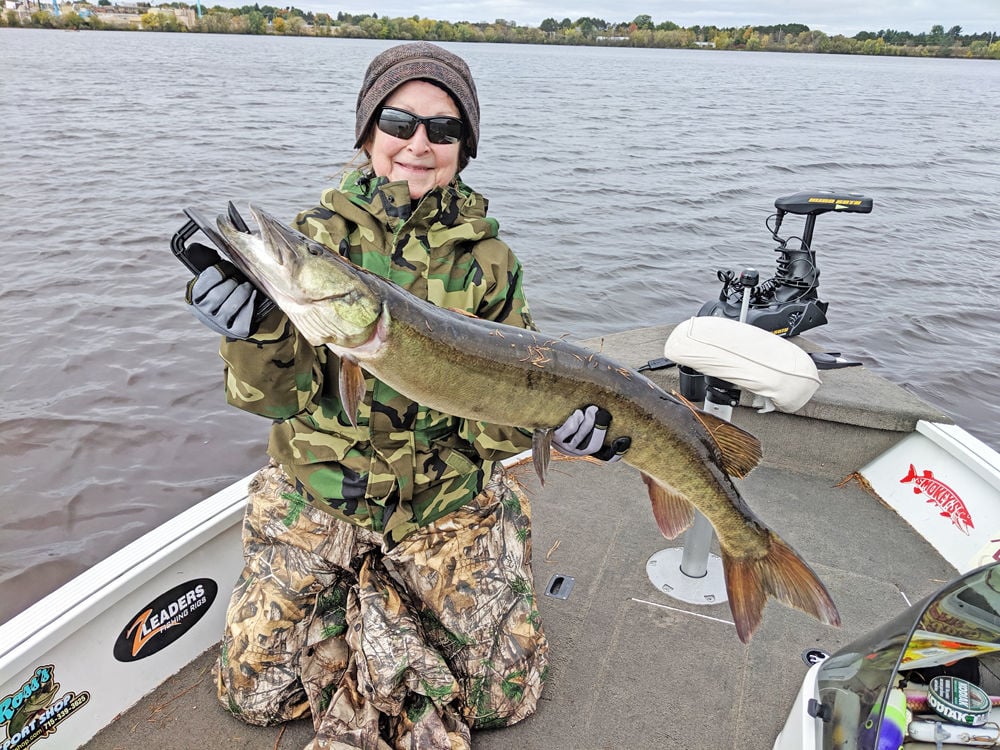 Patricia, one of the veterans who participated in this year’s fishing camp, hoists a beautiful 39-inch musky from her day on the water on Elk Lake. 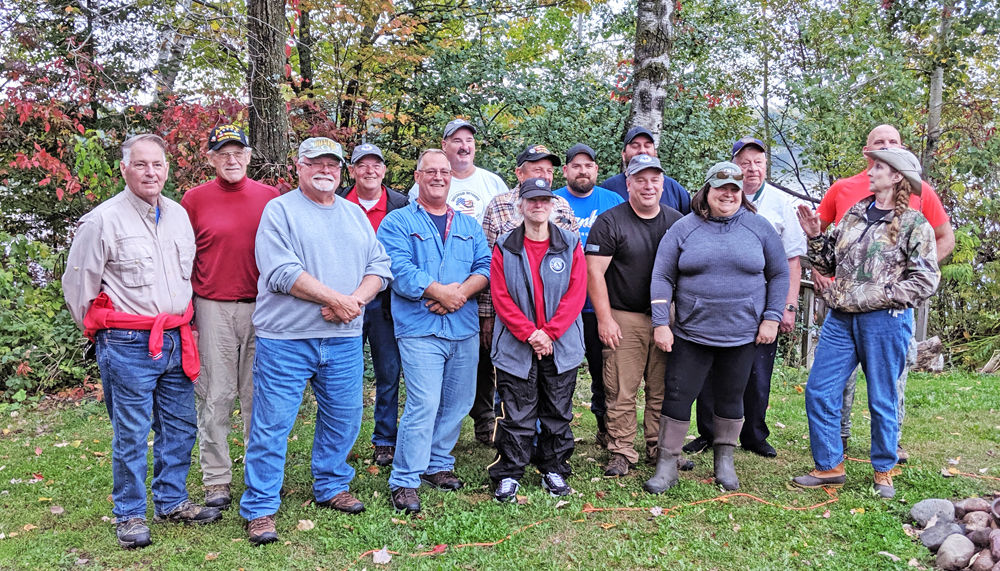 Each autumn since 2014, Hidden Cove Resort near Phillips has served as host to the Wisconsin Veterans Fishing Camp — an outdoor experience offering veterans a few days in nature. Pictured are the 15 veterans who participated in this year’s event. 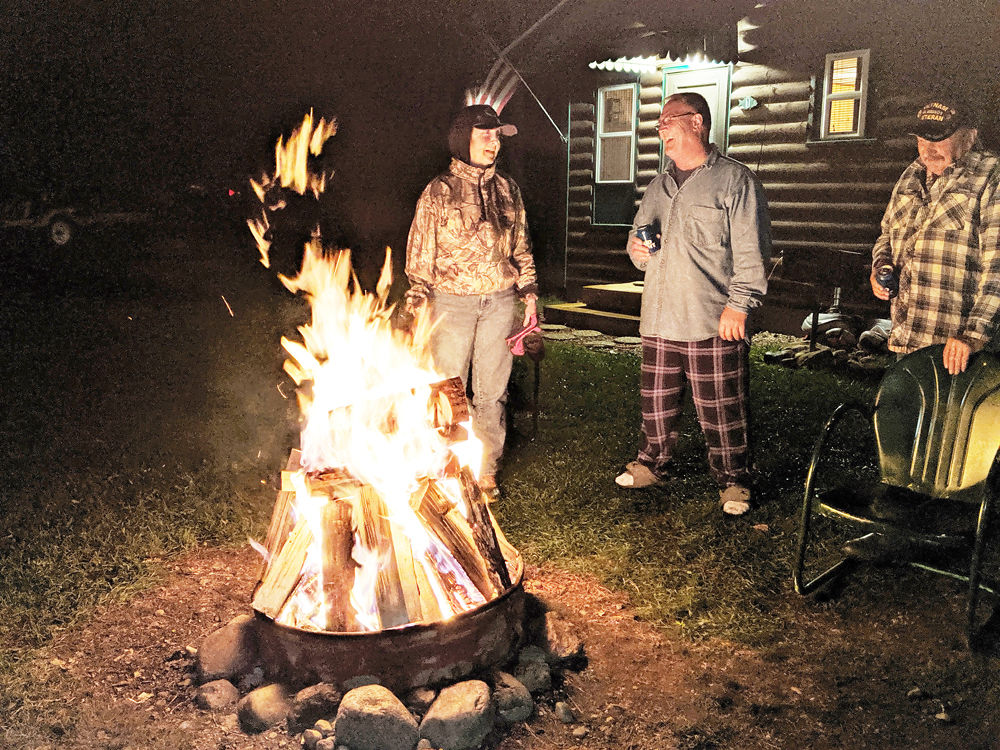 In the evenings, a campfire serves as the social gathering place where veterans and guides rehash the day’s experiences. 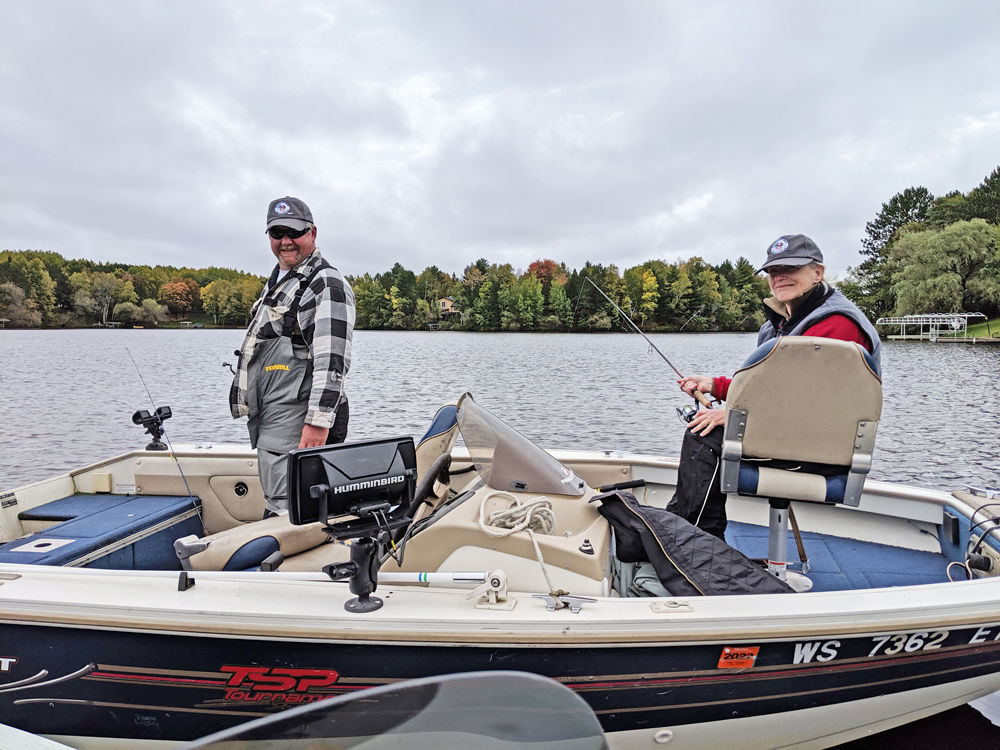 A guide and veteran set off for a day’s worth of fishing.

Patricia, one of the veterans who participated in this year’s fishing camp, hoists a beautiful 39-inch musky from her day on the water on Elk Lake.

Each autumn since 2014, Hidden Cove Resort near Phillips has served as host to the Wisconsin Veterans Fishing Camp — an outdoor experience offering veterans a few days in nature. Pictured are the 15 veterans who participated in this year’s event.

In the evenings, a campfire serves as the social gathering place where veterans and guides rehash the day’s experiences.

A guide and veteran set off for a day’s worth of fishing.

For many veterans, the return to civilian life can be an isolating and lonely experience, navigating a once-familiar world that now feels sharply different after years in service.

For some, the greatest loss is the sense of camaraderie with fellow soldiers, the daily proximity of men and women who can understand the transformation that takes hold in the wake of war.

It was with this thought in mind that John Carlson and Joel Walczak, both longtime fishing guides, decided to create the Wisconsin Veterans Fishing Camp back in 2014.

The annual event brings a small group of veterans to Phillips’ Hidden Cove Resort for a few days of fishing and time spent in nature away from the hustle of the outside world. Fishing guides volunteer their time and expertise in the hopes of sending each vet home with a lunker, or at least a good fishing tale of the one that got away. For some, it is the first opportunity they've had to spend time in nature.

Last week, 15 veterans and 10 fishing guides from across the state traveled to Phillips, spending four nights at the home base of Hidden Cove Resort — which has donated the use of its facilities since the veterans fishing camp was started — exploring local lakes, enjoying the camaraderie with fellow veterans, and leaving with more than fish.

In fact, according to Walczak, any fish caught are simply a bonus.

“There aren't a lot of words to describe how I feel about it,” said Walczak. “It's very emotional. Just sitting here around the campfire, the comfort zone that these people develop together as they let go of the outside world for a while ... the respect that the different generations of veterans have for each other is incredible.”

The quick bonds that are formed around a campfire are strengthened by the common experiences of the servicemen and women who participate. The veterans that participate range greatly in age and background, but share an unspoken kinship having gone through similar experiences.

There is something special about the formula of time spent in the wilderness with other veterans, according to Walczak. Between the fishing lines singing out over the water and the inevitable banter of anglers shooting the breeze, there is found a raw humanity that seldom sees the light of day.

“I've had vets in my boat who have just opened up and let everything out,” said Walczak. “I've had experiences when we're out in the boat and start crying with each other. It's truly a moving experience.”

The camp is run on a strong spirit of volunteerism, which allows the non-profit to continue offering the event for a very low overhead cost, which is covered by donations received from across the country.

All the guides donate their time, homemade meals and cookies are often delivered by community members, and thanks to donations from various companies, veterans are given their own fishing rods, tackle, lures and — if they're lucky — a mounted fish to hang at home.

“It's not about sponsorships, it's people stepping up and doing something,” said Walczak.

At the end of camp, veterans are often surprised with gifts of hand-carved musky lures or paintings of fishing scenes — mementos of their time spent on northern Wisconsin’s lakes. They leave camp with newly minted friendships forged over smoky campfires and fishing reels. Many of the participants form lifelong friendships, staying in touch long after the four days have ended.

This is a one-time experience. In order to retain the close-knit, highly personalized aspect of the camp, the number of veterans is limited. Once they leave, however, each participant is encouraged to nominate a fellow veteran for the next camp.

For Walczak, the camp has become the highlight of his year. Hailing from the Milwaukee area, Walczak was born on a Marine Corp base and has a long line of servicemen and women in his family.

Once Walczak began traveling to the Phillips area and met Carlson through their common line of work, creating a fishing opportunity for veterans seemed a natural conclusion.

“Once I started … man, you don't ever want to stop,” he said. “If I could do this every day of the year, I would. It's incredible to see the reaction of the vets from the time they get here to the time they leave. I can't tell you how many tears are shed on the last day.”

Walczak is a firm believer that part of what has made the fishing camp so successful is the very nature of the Phillips community. Over the four days veterans were in camp last week, many people stopped by the camp, bringing gifts of food or fishing gear or simple words of welcome.

“This is the home of the Wisconsin Veterans Fishing Camp, right here in Phillips,” said Walczak. “I don't ever want to go anywhere else. This place is perfect, and this is where I want it to stay.”