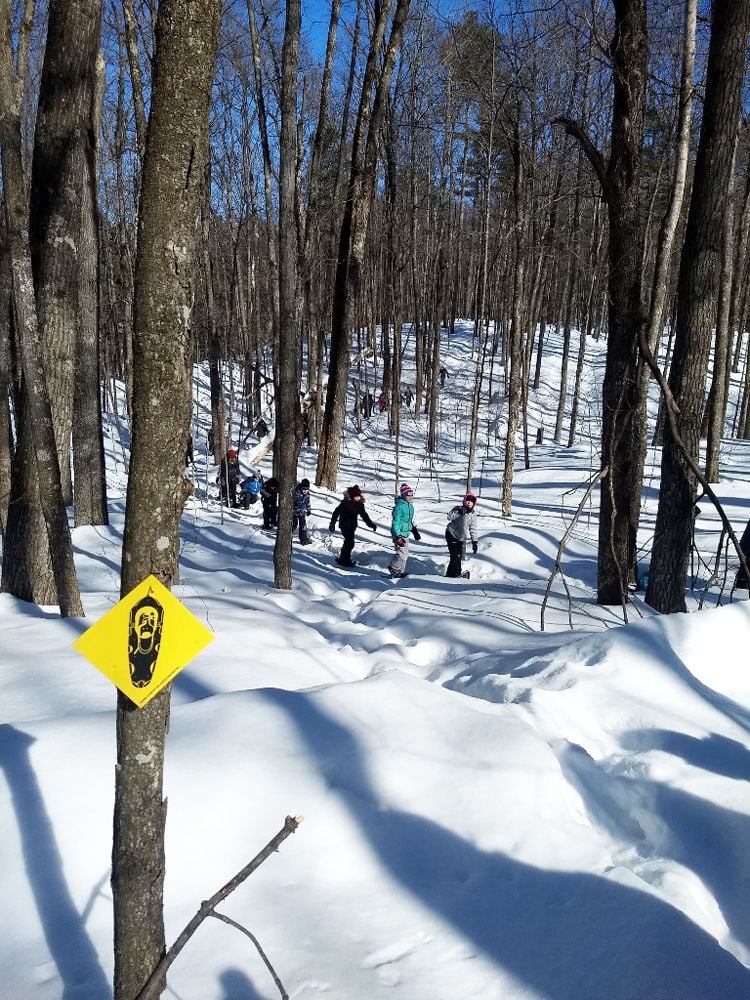 Third graders from Hayward learn about winter adaptations of animals on a snowshoe field trip with the Cable Natural History Museum. 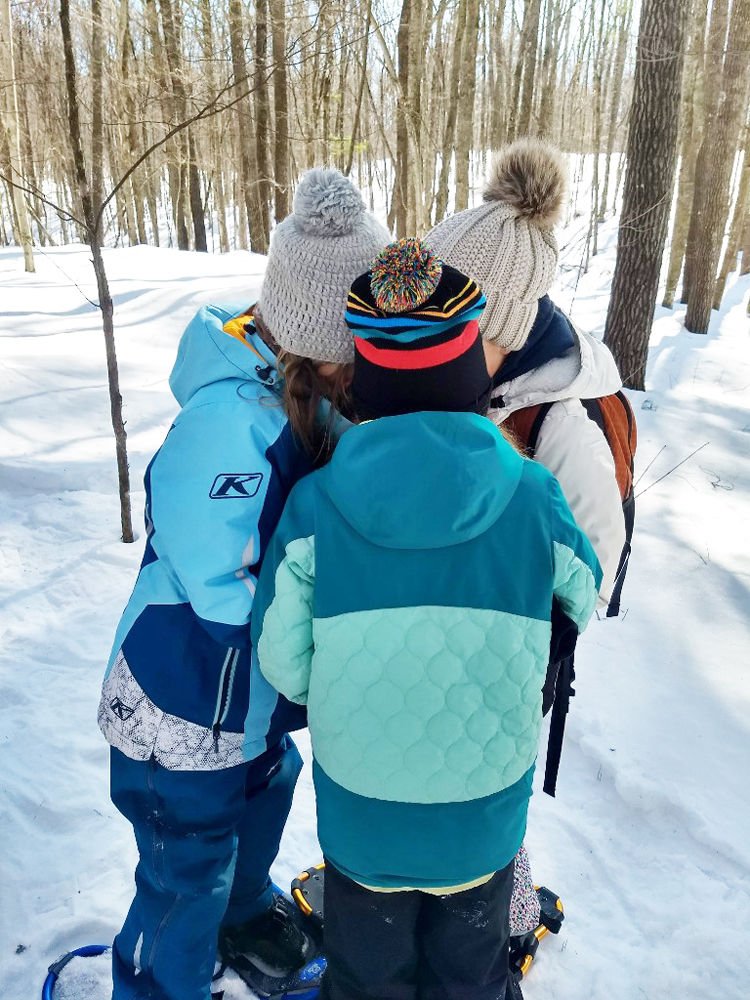 Third graders from Hayward huddle around thermometer in an imitation of how flying squirrels stay warm.

Third graders from Hayward learn about winter adaptations of animals on a snowshoe field trip with the Cable Natural History Museum.

Third graders from Hayward huddle around thermometer in an imitation of how flying squirrels stay warm.

“Awooooo!” My best impression of a wolf howl rose over the crunching of snowshoes and little voices. Gesturing to the group of third-graders from the Hayward Intermediate School, I invited them to howl back. The choir that responded sounded nothing like wolves, but it was music to my ears nonetheless. So was the expectant silence that followed, since these kids were wise to the fact that I’d howled to get their attention.

“We’re going to hike like a pack of wolves today,” I declared. “Do you know how wolves walk when they’re in deep snow?” I led this same snowshoe hike four times over the course of two days, and in each group there was one outdoorsy kid who knew. Wolves walk in a single file line and step precisely in the footprints of the wolf in front of them. The kids understood the benefits of the wolves’ behavior intuitively. Who hasn’t made their own life easier by following in someone else’s footsteps through deep snow?

With one last admonition to walk in a single file line, I howled again, and they howled back as we started up the trail.

The Mammal Tour on the Ridge Trail is a wonderful community resource. The 1.1-kilometer loop trail is the easiest of several snowshoe trails at the North End Trailhead just south of Cable, Wisconsin, and the Museum and our partners have created a self-guided interpretive trail along its length. There are life-sized silhouettes of local mammals cut out of metal. (The original wooden ones were destroyed by a porcupine.) Trail guides available at the trailhead contain a map of the trail, plus images, information, and tracks for all the mammals.

Out in the woods, my plan was to teach about how animals confront the cold and snow head-on. Back in the Museum’s education room, Haley Appleman, the Museum’s naturalist, was teaching the other half of the group about animals that migrate and hibernate.

Our first interpretive stop is at the wolf and deer silhouettes. Wanting to wow them with the thickness of a wolf’s fur, I walked over to one of my helpers—a third grader carrying a heavy orange backpack. When I unzipped the pack and started pulling out a huge wolf pelt, a wave of surprised comments rippled outward. The helper was the most surprised of all. “You mean I was carrying that on my back!?”

We also compared wolf tracks to deer tracks. Wolves’ relatively large feet act like snowshoes and help them run on top of crusty spring snow. Deer hooves punch through more easily. One dad with long legs and without snowshoes offered to demonstrate the difference. A few steps off the hard-packed trail and he was sinking in up over his knees. “Is that pretty easy?” I called up to him. “Nooo,” was his breathless reply. We all laughed.

Our next stop was below the form of a flying squirrel. Unlike wolves, they don’t have thick enough fur to sleep out in the open. For warmth, flying squirrels huddle together with their friends in a hollow tree. Handing out durable thermometers to small groups of kids, I challenged them to see how much heat they could generate by huddling together with their friends. Most groups brought the temperature up to 40 or 50 degrees, but one group of girls used their breath and registered over 70 degrees!

At a set of weasel tracks bounding two-by-two from tree base to fallen log, I paused and pulled out two small furs. One was almost pure white; the other was brown on top and white on the belly. Both tails were tipped with black. Short-tailed weasels, also called ermine, turn white for the winter. The black tip stays as a decoy. Hungry red-tailed hawks will aim for the conspicuous tail spot…and miss the vital organs. In my opinion, these are the softest furs at the Museum, and every kid who removed their mittens in order to feel them was suitably impressed.

Weasels don’t need large snowshoe feet because they spend most of the winter tunneling under the snow. Snowshoe hares, on the other hand, combine all of the best winter adaptations. They turn white, they have giant hind feet, and they have warm fur. Out of a second volunteer-carried backpack, I pulled track molds of both snowshoe hare and cottontail rabbit hind feet. The relative sizes were pretty similar to the kids’ feet with snowshoes and without. By this point, many of the snowshoes had fallen off and were being carried, but the kids still appreciated the comparison.

“Awoooo!” I called again, and “Awoooo-oo-oo!” my wolf pack replied as we began the last stretch of their hike back to the bus. With the end in sight, tired legs were forgotten and the group’s chatter turned to comments like “that was so fun,” “we hiked so far,” and “I wish we could go farther.” This, of course, was music to my ears.

Author’s Note: Portions of this article appeared in 2018. I say almost the same things on this field trip every year!