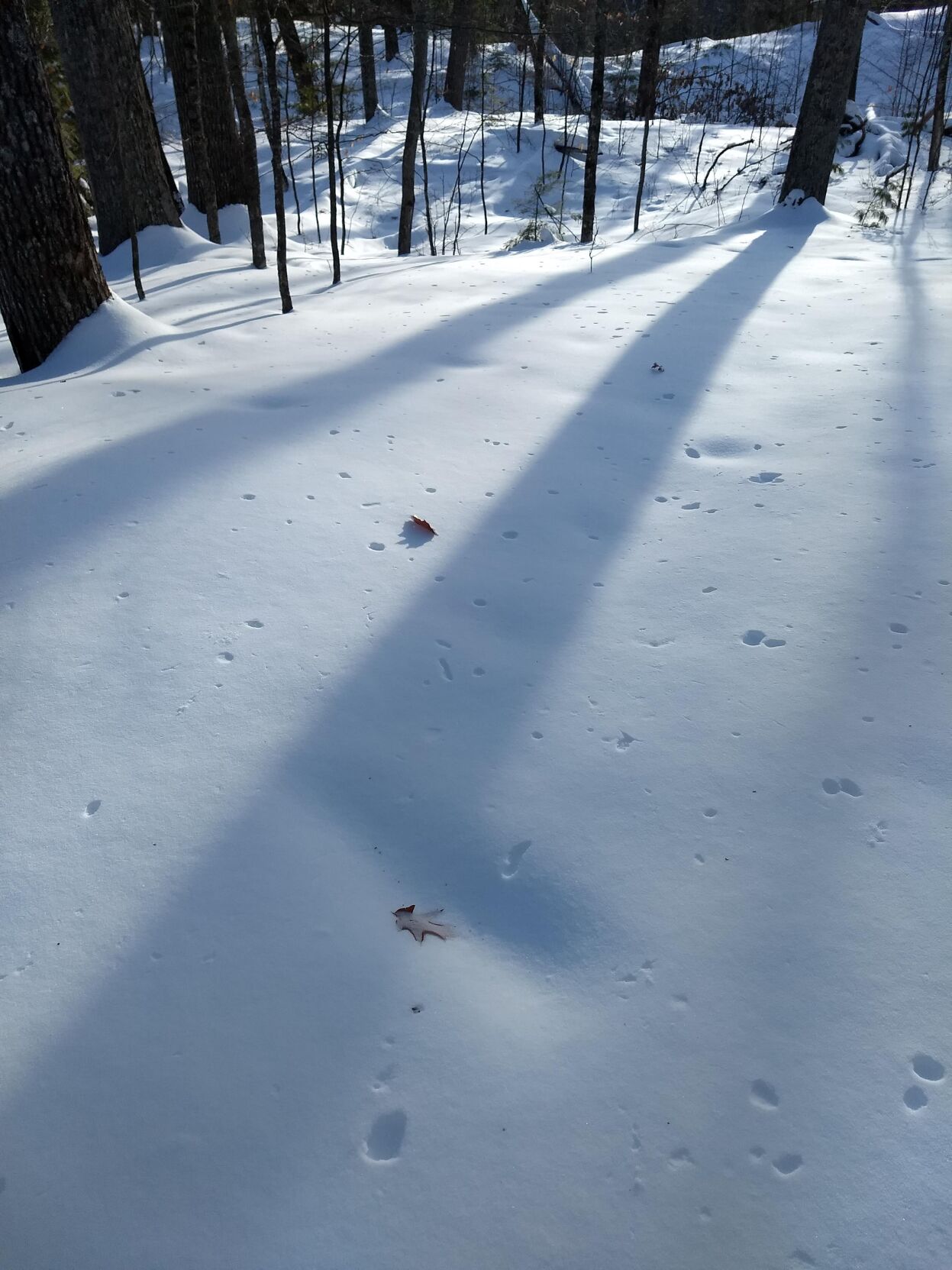 Only snow-plops blown out of treetops marred these smooth drifts of snow. 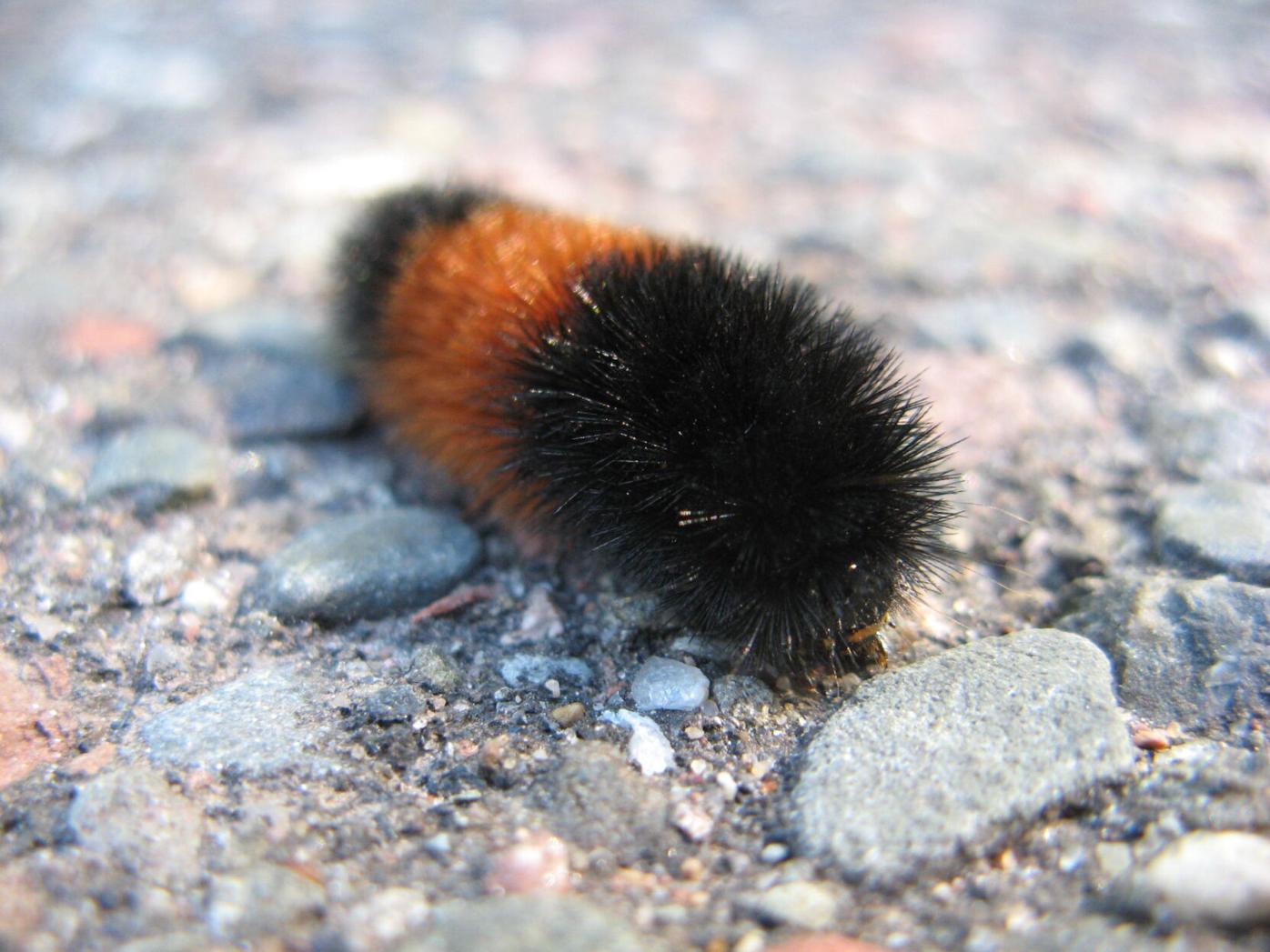 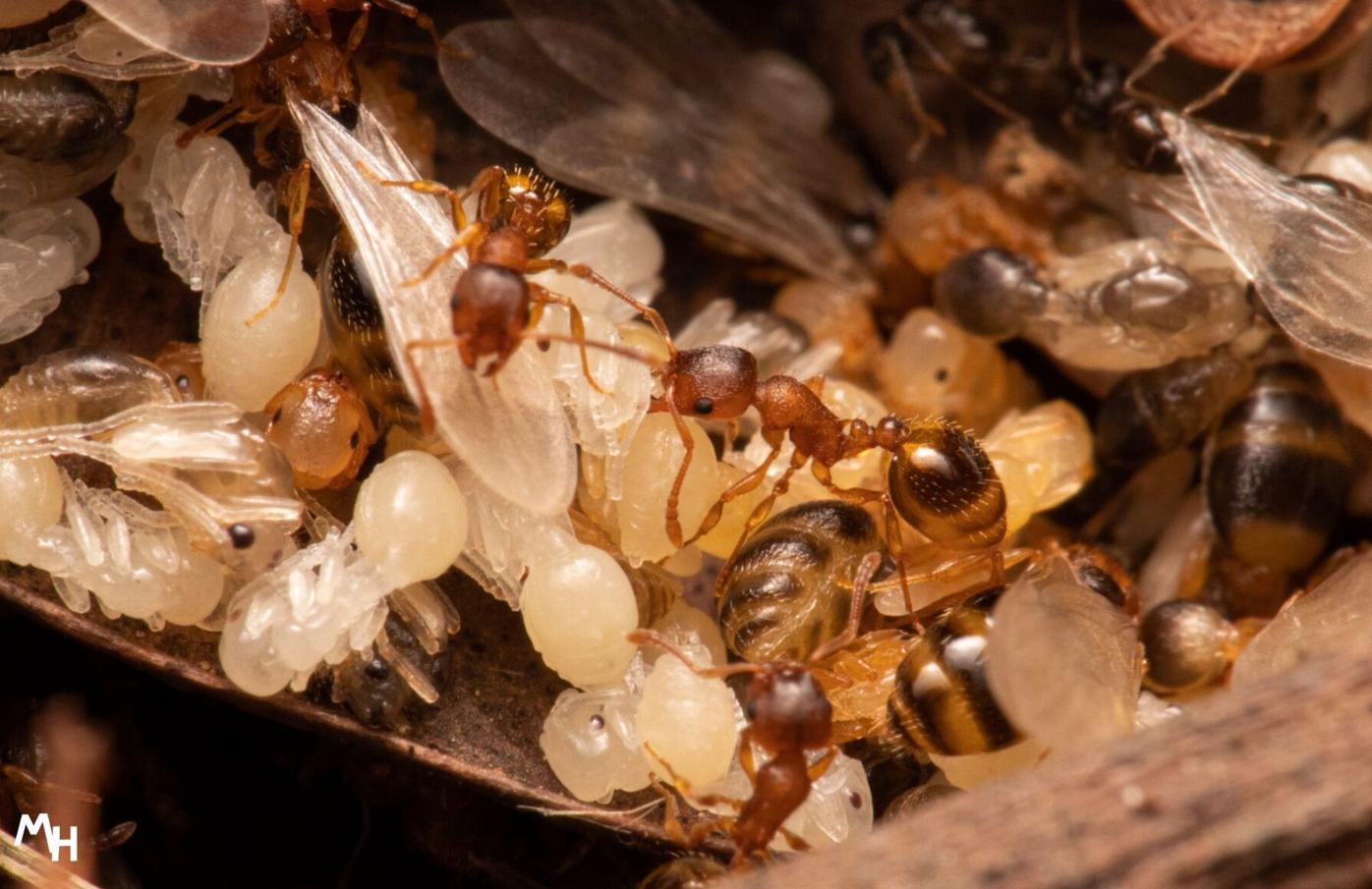 Temnothoraz ants are also known as “acorn ants” because their colonies live inside acorn shells.

Kerflumpf. Mumpf. Fump. It’s difficult to describe exactly the sound that snowshoes make in 18 inches of fresh, fluffy snow. I can tell you that the soundtrack includes some huffing and puffing, and the swish, swish, swish of nylon sleeves as arms swing their assistance. At the start of our recent dive into the polar vortex, I traded skis for snowshoes and headed out into the untracked forest.

The woods felt peaceful and serene. Only snow-plops blown out of treetops marred the smooth drifts. Winter, I thought to myself, can feel pretty lonely sometimes. If only I was smaller…

Because, for the little critters at least, there is a party going on under there. Under where? In a curious space called the subnivean zone.

Do you remember the magic of hoar frost that I wrote about a few weeks ago? Water vapor in the air crystalizes directly into ice without going through the liquid phase. Under the snow, at ground level, the opposite happens. Latent heat from the earth—stored months ago during days of summer sunshine—gives snow crystals at ground level just enough energy to vaporize back into their gaseous form. Sublimation is the scientists’ term.

The vapor rises just a bit, filtering into the snow, where it changes the structures of crystals as it solidifies again. The result is a zone of airy pockets and loose, granular snow topped by an icy ceiling; and above that a thick, insulating blanket made—counterintuitively—of ice and air. Best of all, this magical space remains at or near freezing. That might not usually seem warm, but after our weeks of subzero temps, we can probably agree that 32 degrees Fahrenheit sounds fairly pleasant.

I’ve written and taught about this subnivean zone many times before. Usually my focus is on the small mammals—mice, voles, and shrews—who make their winter homes in tunnels sewn between soil and snow. And, of course, there are the charismatic carnivores who chase those warm nuggets of protein. Short-tailed weasels (who become ermine in their white winter fur) follow mice directly into their dens. Foxes and owls take another route—pinpointing supper with their ears and then plunging in from above.

But I mentioned a party going on under the snow, and these are only the most visible revelers. Jon Pauli, a winter ecologist from UW-Madison, explains that, “In this refuge, there's a complex ecosystem of interacting microbes, insects, plants and animals that we can't see but are active throughout the winter.” In fact, says one of his research papers, the subnivium is where the “majority of biodiversity in northern temperate areas spends the winter.”

For example, Pauli and his colleagues have been studying the impacts of warming winters on the energy budget of wood frogs. These cold-blooded amphibians take refuge in leaf litter and very carefully allow themselves to freeze solid while the subnivean zone forms around them. Once frozen, their metabolisms are shut down, which preserves their limited energy stores. The moderating effects of the subnivium buffer them from energetically costly freeze-thaw cycles, and also reduce the potential for lethally low temperatures.

Frozen wood frogs have a fair amount of company. One group of ants, in the genus Temnothorax, likes to set up house inside empty acorn shells. Like a colonial version of hermit crabs, they compete for a limited number of good homes. Loathe to abandon their nut hut for the winter, they simply snuggle up with about 100 workers and a few larvae and produce glycerol as an antifreeze to prevent cell damage. Unsurprisingly, colonies in acorns that are buried more deeply in the leaves and soil have higher winter survival rates. Also unsurprisingly, the little girl in me loves that nature has its own version of acorn fairies.

A thick layer of leaf litter isn’t just important for ants. Autumn leaves provide insulation before snow accumulates, and then continue to augment our fluffy white blankets. This protects plants’ roots from freeze damage. Dead leaves also provide essential habitat for woolly bear caterpillars, mourning cloak butterflies, luna moth cocoons, the eggs of red-banded hairstreaks, bumblebee queens, spiders, snails, millipedes, mites, and more. Some of them are frozen, some of them are active. And they aren’t the smallest subnivean inhabitants.

The microbes that Pauli mentioned are important here, too. Fungi and bacteria take advantage of the microclimate of the subnivean zone to slowly break down dead stuff throughout the winter. They release their nutrients in spring—just in time to fuel the growing season. In contrast, invasive earthworms decimate the leaves too quickly. Both insulation and nutrients diminish.

As I was saying, the soundtrack above the snowpack is pretty quiet. That allows me to cock my ears like a fox and focus my listening toward a hidden world beneath the snow. What do I hear? A wild party in that magical place we call the subnivean zone.

Emily Stone is a naturalist and educator at the Cable Natural History Museum. For more than 50 years, the Cable Natural History Museum has served to connect you to the Northwoods. The Museum is closed, but our Mysteries of the Night exhibit is available online. Connect with us on Facebook, Instagram, YouTube, and cablemuseum.org to keep track of our latest adventures in learning.