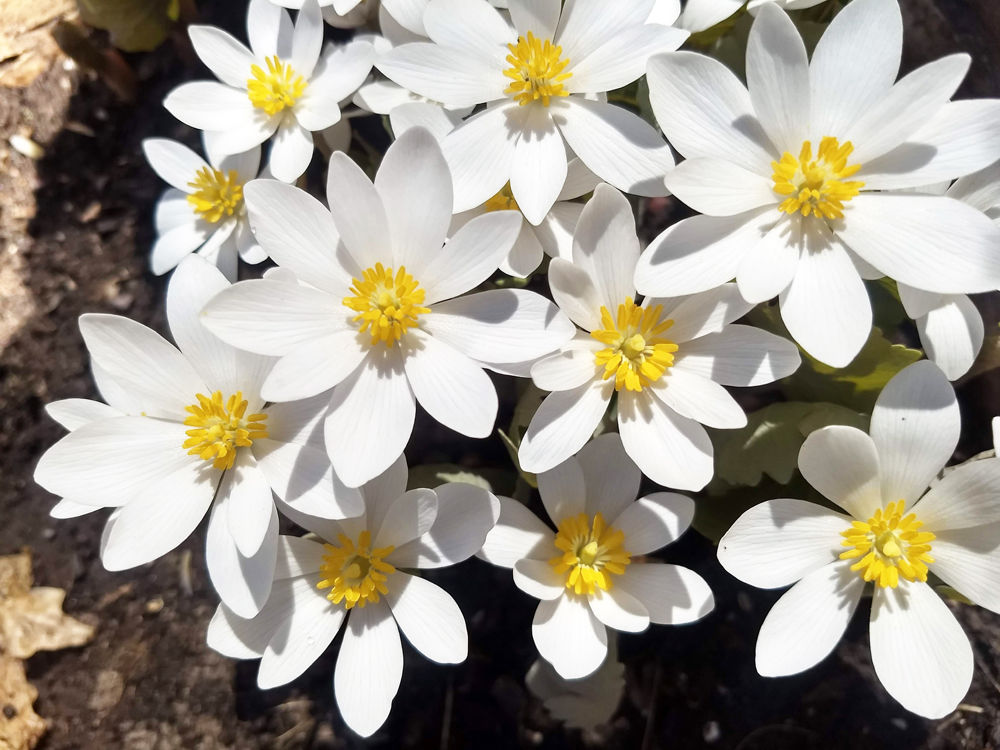 Bloodroot is one of our earliest blooming wildflowers. In contrast to its pristine petals, the stem and roots leak red juice if broken. 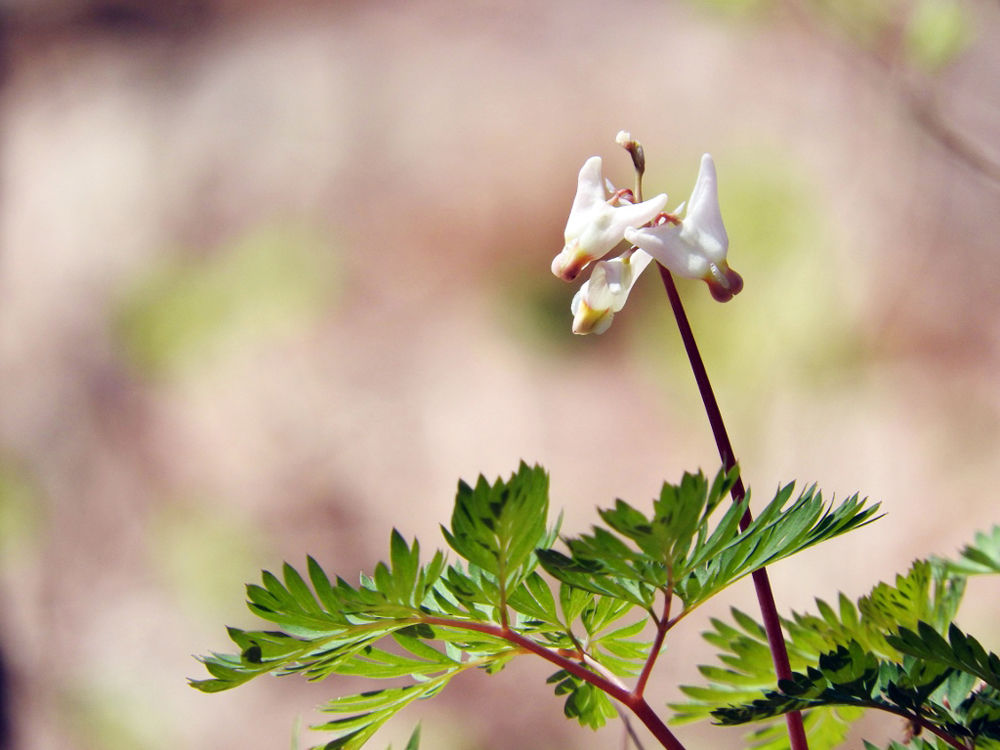 Dutchman’s breeches flowers look like little pantaloons on a clothesline. 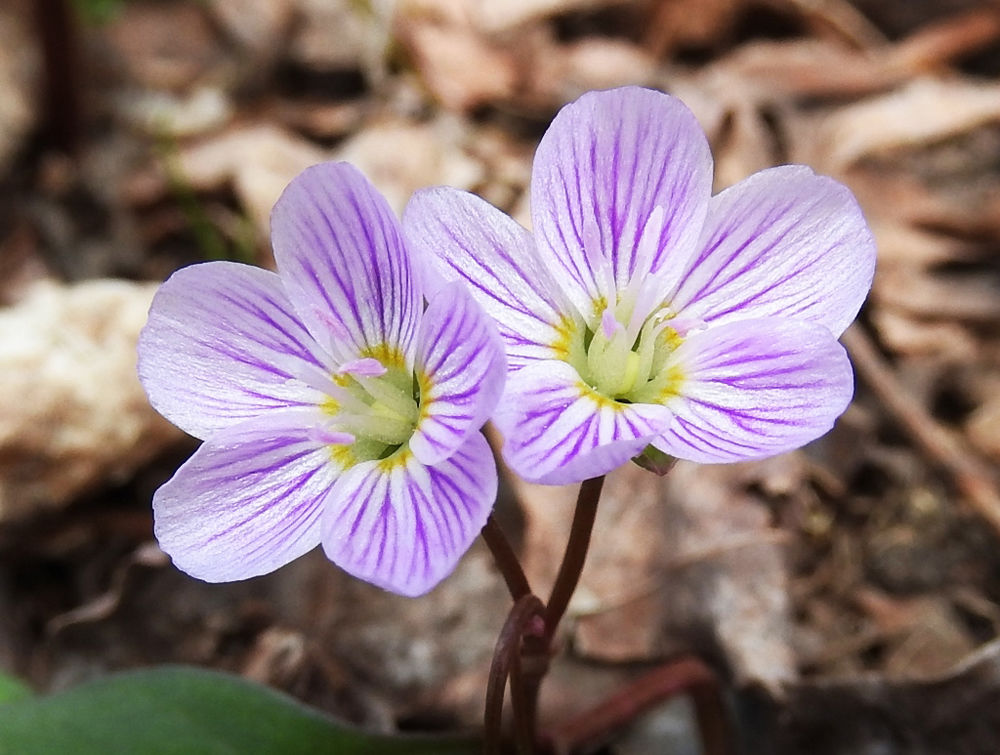 Spring beauty flowers vary from almost pure white to having bright purple stripes on their petals. At St. Peter’s Dome, some patches were blooming profusely, while ones in cooler microclimates were still just presenting leaves and buds.

Bloodroot is one of our earliest blooming wildflowers. In contrast to its pristine petals, the stem and roots leak red juice if broken.

Dutchman’s breeches flowers look like little pantaloons on a clothesline.

Spring beauty flowers vary from almost pure white to having bright purple stripes on their petals. At St. Peter’s Dome, some patches were blooming profusely, while ones in cooler microclimates were still just presenting leaves and buds.

Over the past few sunny days, my anxiety levels have been rising. Oh, there’s the global pandemic to worry about for sure, but that’s not why sunshine has me worried. The issue is that I’ve been laser-focused on my computer lately, while I create virtual versions of our MuseumMobile lessons before schools dissipate for the summer. You can access them through the banner on cablemuseum.org. And while I’ve been working inside, I’ve been worried that outside, spring is happening without me.

What if I miss the Dutchman’s breeches flowers? Will all the bloodroots have dropped their petals by the time I get there? I usually don’t count on seeing all the flowers before Mother’s Day, but is spring coming early this year? Time is passing differently during the lockdown.

So, on one particularly warm, sunny afternoon this week, I headed up to St. Peter’s Dome and Morgan Falls to see for myself. This Research Natural Area boasts one of the best “northern mesic forest” communities in this area. What does that mean? Rich soils with plenty of nutrients and water (but not too much water) support deciduous trees like sugar maples. And underneath those still-leafless trees, in the strengthening sunshine, thrives a community of spring ephemeral wildflowers.

Ephemeral means fleeting, transitory, evanescent, flitting, and impermanent. Those synonyms give me a little thrill, I’ll admit, but also a tingle of terror. Ephemeral means that if you don’t get out into the woods at the right time, these absolutely exquisite flowers will return to dormancy beneath the surface and you’ll have to wait an entire year to see them again. Right now, a year feels like a lifetime.

I examined my anxieties, knowing that my life would indeed go on even if I missed out on this one ritual of spring. A Mary Oliver poem came to mind, where she mourns the death of a river, and grieves for “lost joyfulness.” When someone in the poem asks: “Isn’t this somewhat overplayed?” She justifies her feelings by saying, “it can be a friend. Companion. A hint of heaven.” Indeed. These wildflowers are old friends. Friends whom I can’t infect, and who can’t infect me. And if not heaven, they certainly transform the forest into a fairyland.

As I wound my way through gravel backroads — hopefully toward a rendezvous with my friends — I peered into the woods for clues to their well-being. Vivid green patches of wild leeks (also known as ramps) popped up here and there. I’ll be harvesting those soon. I love making both quiche and pesto with the pungent leaves. They replace all the greens and spices in a recipe; no additional spinach, garlic, or onions needed. In a move that’s as lazy as it is sustainable, I pick just one leaf per cluster instead of digging up the muddy roots. Less washing. Less impact on the population. It’s a win-win.

The green leaves of leeks are refreshing for both the eyes and the palate, but they aren’t one of the flowers I’m seeking. Wild leeks don’t bloom until July, which is weeks after their leaves have finished storing the sun’s energy in their bulbs as carbohydrates, and withered away under the thick shade of the forest canopy. Why this separation? Well, the leaves need sun, but the flowers need pollinators, and each is more abundant in their own season.

To everything there is a season, and after I’d hiked just a short distance down the trail, I was comforted that I had not missed this one. A few pink-striped faces of spring beauties smiled up at me, but many patches were just filled with their skinny little pairs of leaves.

Where’s that patch of wild ginger I always look for? The unfurled leaves were still small, and the single flower bud I spotted was tightly closed. In contrast, my chest opened a little, relaxing in the knowledge that my fears were unfounded and I had not missed spring.

My favorite patch of bloodroot was blindingly white, seemingly in full flower. Zooming in with my camera, though, I noticed a couple of bare stems, where a pollinated blossom had already shed its petals. These are one of the earliest bloomers. The showy pantaloons of Dutchman’s breeches flowers were also near peak bloom, with no flowers past their prime, and some buds still expanding. But the white of trilliums was still bundled up tight, and not a single plant had more than a swelling bud.

Several hours flew by as I followed my camera up and down the trail, trying to find just the right light and just the right angle that could help me capture the joyfulness present in these ephemeral wildflowers.

In our current chaos, it is comforting to know that spring is not cancelled.

“It is a serious thing just to be alive on this fresh morning in the broken world.” —Mary Oliver