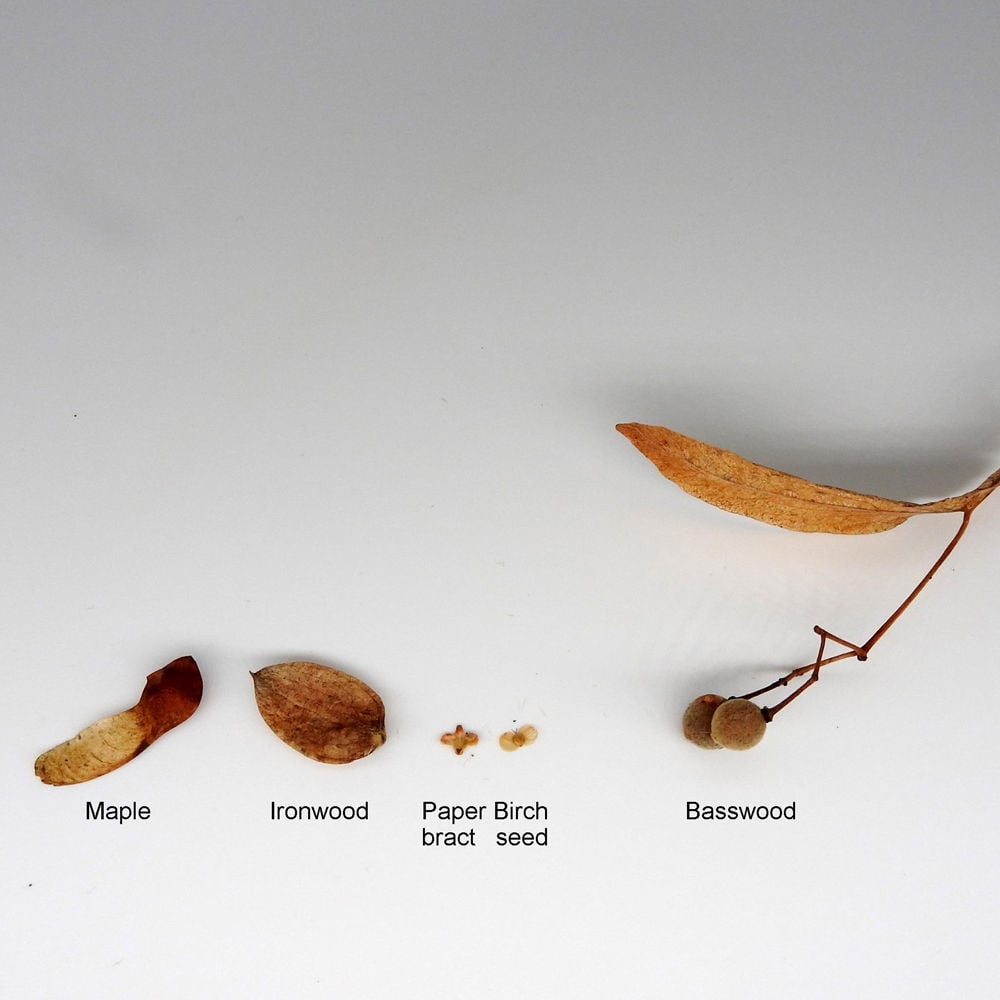 These four species of winged seeds have decided that winter is a good time to fall through the forest and blow around on the snow. 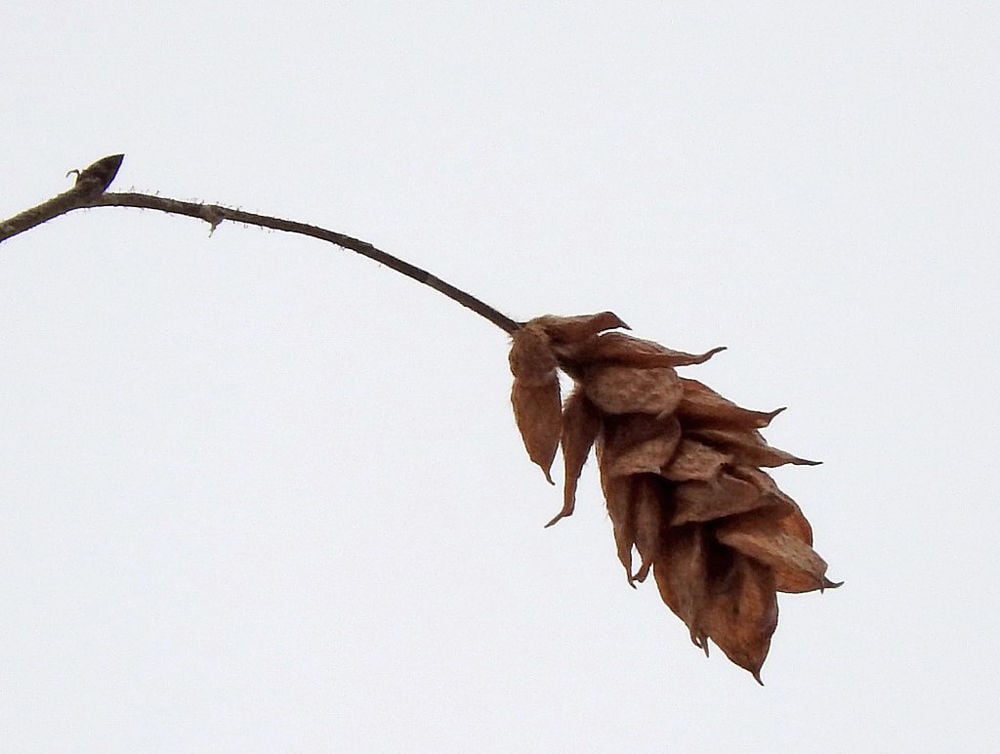 Ironwoods seeds hide away in papery husks, which grow in hops-like clusters.

These four species of winged seeds have decided that winter is a good time to fall through the forest and blow around on the snow.

Ironwoods seeds hide away in papery husks, which grow in hops-like clusters.

Sunlight streamed through clouds and trees, and spun webs of shadow through the white woods. A fresh layer of crystals sparkled on top of the graceful drifts and glittered invitingly from the wide expanse of the ski trail. In dry winters, a sprinkling — or more — of pine needles and oak leaves often mar the ski trails and drift into the tracks. This year, storm after storm has buried them.

Which is why, as momentum swooped me around a corner and back uphill, a mess on the snow caught my attention. Most of the brown sprinkles were on the outside edge of the trail, but one brown comma-shape, less than an inch long, had ventured close enough to the tracks for me to get a good look. Not that it took much to recognize the classic shape of a maple tree’s winged seed. If my thick gloves locked in pole straps had not been so unwieldy, I would have flung the helicopter high and watched it spin down.

Eyes roving away from the single seed, I examined the messy snow where more of the seed’s kin lay scattered. Perhaps some birds had perched above and made a meal of last summer’s bounty. I looked up to see. Where I’d been expecting the stoic gray of a young red maple tree, I found a lithe bouquet of slender trunks with tan bark and red twigs. “Mountain maple!” I exclaimed in my head, and was pleased to see this old friend who is more common farther north.

Back when I was learning plants, someone had given me the mnemonic “mountain man maple,” as a helpful reminder. The lower stems, just a few inches in diameter, were clothed in buckskin-colored bark, and the upper stems resembled the red plaid of a mountain man’s shirt. Moose maple (they love to browse on the twigs), mountain maple, and spike maple are descriptive names for the small, shrubby tree whom botanists call Acer spicatum.

Spike and spicatum refer to the finger-like racemes of flowers that poke upright from twigs in the spring, and later dangle under the weight of fat, pink, winged seeds. A few clusters of dried, brown seeds still dangled from the twigs — a lucky find for hungry wildlife when so much is buried deep beneath the snow.

It may also be beneficial for the maple itself to hold onto seeds until the woods are sparse and airy. The helicopters are built to sail on the wind, but wouldn’t get far in the leafy thickets where mountain maple often grows.

In fact, several trees use the blank slate of snow — especially when it develops an icy crust — to help their winged seeds travel farther. Since icy roads and narrow trails have me looking at my feet so much lately, I’ve been enjoying the way that seeds on the snow help me keep track of the species I’m wandering among.

Just a little farther up the ski trail, I found the unique seeds of a basswood tree. Each cluster of nectar-rich, bee-loved basswood flowers comes with a graceful, finger-sized leaf called a bract. Those bracts often remain attached to the seeds that develop later on. Sure enough, dangling beneath the bract on long stems were two small, gray balls. These nutlike drupes, like small, hard cherries, each contain one or two seeds that ripened back in October. Basswood trees tend to blend in with the maples they grow among, but when their seeds dangle from twigs or litter the forest floor, the trees become easier to recognize.

Ironwood trees also tend to be pretty inconspicuous. This slow-growing species with dense, hard wood does not often escape the understory. Lately, though, I’ve been spotting their seeds — encased in ½-inch-long, papery, pointed-oval husks — on the snow, and glancing up to discover a tree of respectable size in a place I wasn’t expecting it. You might also know them as “hophornbeam,” which is a reference both to their hard wood and way that their seed husks overlap like shingles to form clusters that resemble hops.

Many of us have noticed the seeds of birches scattered like black pepper on the snow. Tiny, pointed-oval seeds have two elephant-ear-shaped wings. Looking up, you can often spot the ruffled, disintegrating clusters where more seeds wait to fall. In among the seeds are also little leaf-like bracts with three points in front and one in back. That shape makes me think of bird tracks, which is appropriate, since many little winter birds nibble on the seeds.

Winter is a lovely time of year. And although the deep snow and treacherous ice can force us to look down more than we’d like, the blank canvas around our feet makes different things visible. Getting outside is a key antidote to cabin fever, and whenever I do, I find that looking down also inspires me to look up.