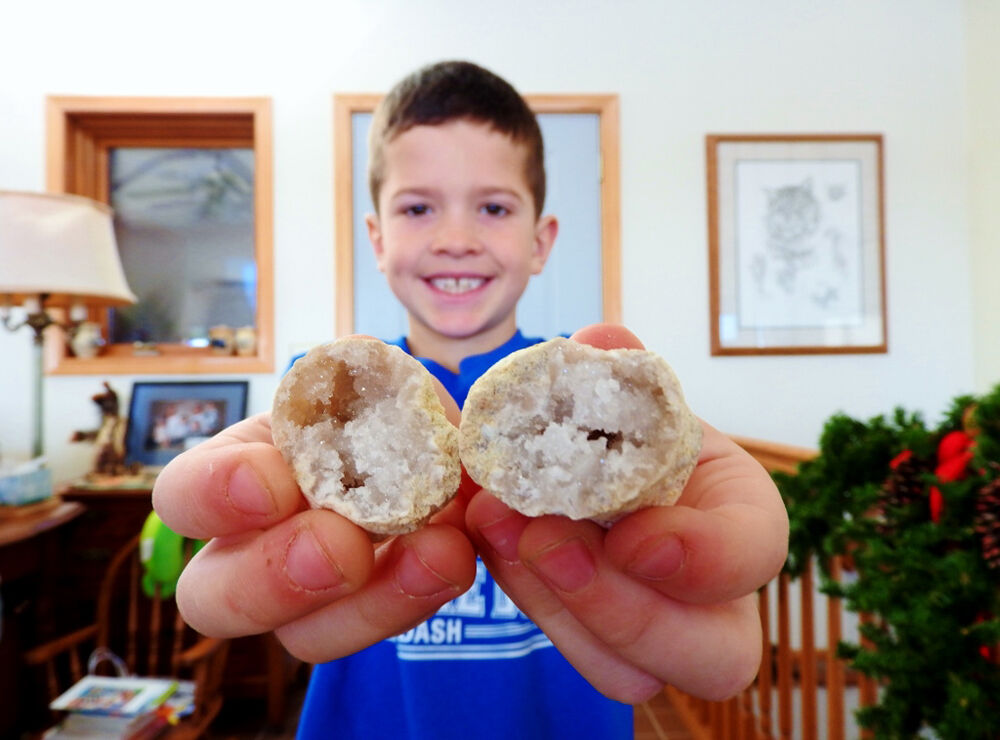 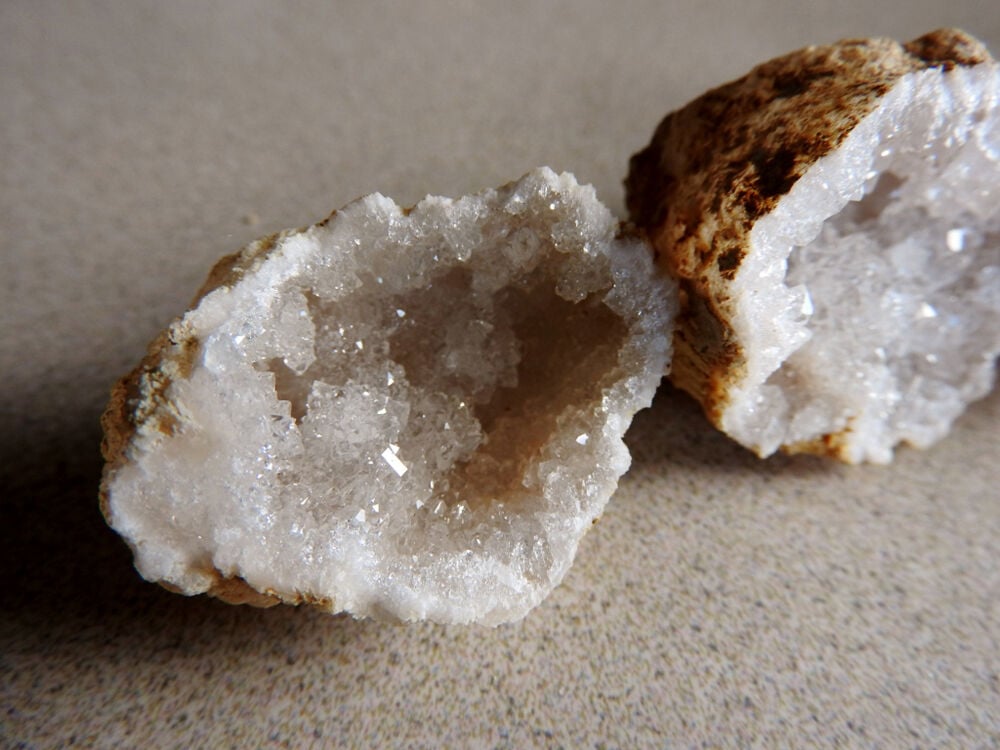 Portions of this article are reprinted from 2016.

What did you have on your list when you climbed onto Santa’s lap in years past? If you were one of my brother’s kids, you asked for rocks. Kids after my own heart! We are the Stone Family after all.

The rocks they wanted were “crack your own geodes” — a surprising treasure! These bland-colored, roundish rocks look positively dumpy on the outside. Whack them with a hammer, though, and they split open to reveal an airy chamber lined with sparkling crystals. What’s not to love about a tradition that includes hitting and breaking things, the joy of surprise, and sparkles all in one?

That tradition used to require a quick field trip out to the garage in our stocking feet, so that we didn’t spread rock shards all over Grandma’s floors. This year our entire Christmas happened in the garage. Grandma, Papa, and all the kids wore warm clothes and masks, while I zoomed in from afar. For the first time in many years, there were no geodes to crack. I miss them all, though: the Stone kids and the stone rocks. So here’s a trip down memory lane.

From the outside, geodes often look sallow, plain, and small. I was worried the ones I’d bought for the kids would be duds. Derek wasn’t discouraged, however; in his experience, these boring-looking ones have produced the best crystals. The three younger kids and I put on shoes and safety glasses and headed into the garage. We rummaged on Papa’s work bench until we found a hammer and chisel, and let the cracking commence.

Derek was lead rock hound, and he cracked the first one. It popped open easily, revealing a delicate lining of clear, glittering, crystals. “Ohhh” and “Ahhh,” we exclaimed appropriately. He also cracked Isaac’s geode, and the kids dutifully set it aside for their big brother after admiring the sparkles.

Next, Zac, the rock cracker’s apprentice, took his turn. The geode rolled around a bit under his tentative hammer, and Derek bravely helped him out by holding it steady. His fingers survived! A crack formed, and one more gentle tap split it open to an admiring chorus. Somehow, the anticipation and revelation never gets old. After Derek helped Zac’s twin, Kylee, split hers, too, they all trouped back inside to show Grandma.

Derek’s prediction had been correct: these unassuming geodes all held beautiful crystals, and the kids declared this the best round of Christmas geodes yet!

Curious as to where these splendid geodes came from, I looked up the purchase order. “Moroccan geodes” was their exotic title. This little country at the northern edge of Africa hasn’t seen a glacier in ages, so the rocks there have had time to weather at the surface. The region boasts some cool geology. Morocco’s geodes were formed in basalt—just like our Lake Superior agates. But the photos of Moroccan basalt look nothing like the glacier-polished North Shore. The African rock is crumbly and brown from ages of oxidation and weathering.

Geodes occur closer to home, too. They are the state rock of Iowa! The epicenter of Iowa geodes is in the far southeastern corner, in a 35-mile radius around the town of Keokuk, including parts of Missouri and Illinois. This world-renowned site sits on the Lower Warsaw Formation, which was deposited as mud in a shallow sea 340 million years ago, and lithified into shales and limestones.

It doesn’t matter if geodes form in basalt or limestone; they still need a cavity to start with. The holes in basalt were created when gas bubbles formed in the cooling lava. The holes in the Iowa limestone have a more complicated origin. They began as concretions, which are the opposite of geodes.

Concretions formed when minerals hardened around some nucleus in the mud, creating a nodule. After the chemical composition and acidity of the surrounding water changed, a cryptocrystalline type of quartz (made of crystals that are hard to see even with a microscope) replaced their outer shell. Next, the inner, more soluble minerals of the concretions dissolved and left a hollow space.

Finally, over thousands to millions of years, mineral-rich groundwater percolated through the space and precipitated sharp-angled crystals of quartz from the walls of the cavity inward.

Sometimes other minerals will join the mix and expand the color palette. As in agates, these colors occasionally form concentric bands. The difference between agates and geodes is that agates are created when cavities in the rocks are filled with patterns of colorful cryptocrystalline quartz, while geodes grow visible crystals (not always quartz) into a hollow center.

In any case, getting rocks in your Christmas stocking can be a pretty fun tradition. With the Stone kids, I discovered that even a shiny black lump of coal can be a treat!