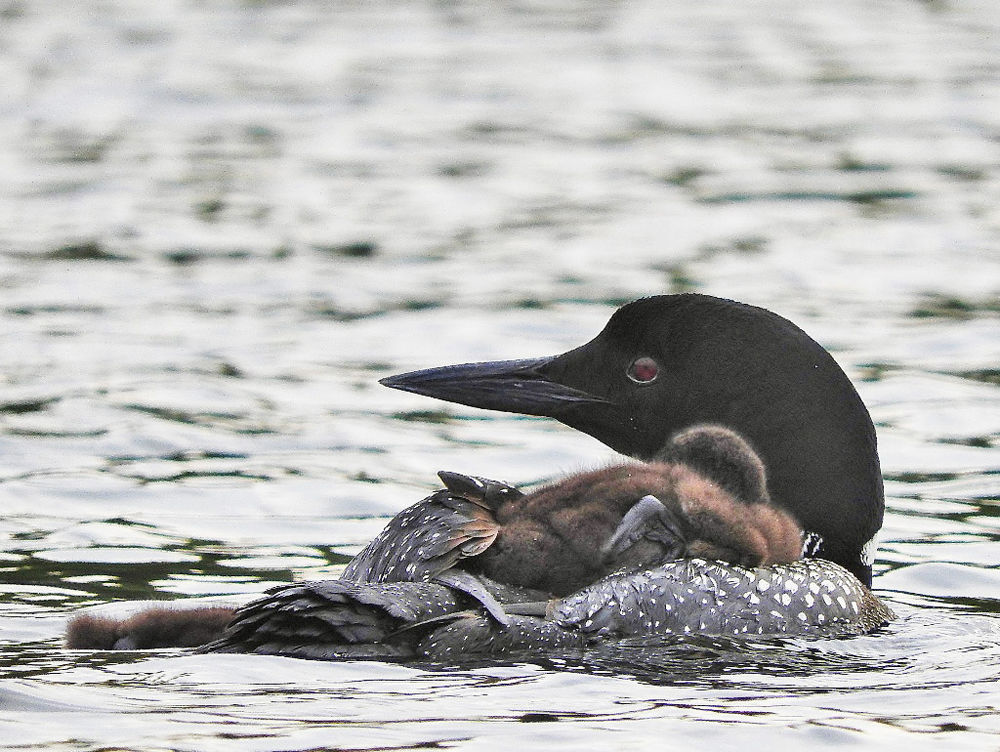 Loon chicks ride on their parents back during their first two weeks of life. It’s warm, it’s safe, and it’s dry. 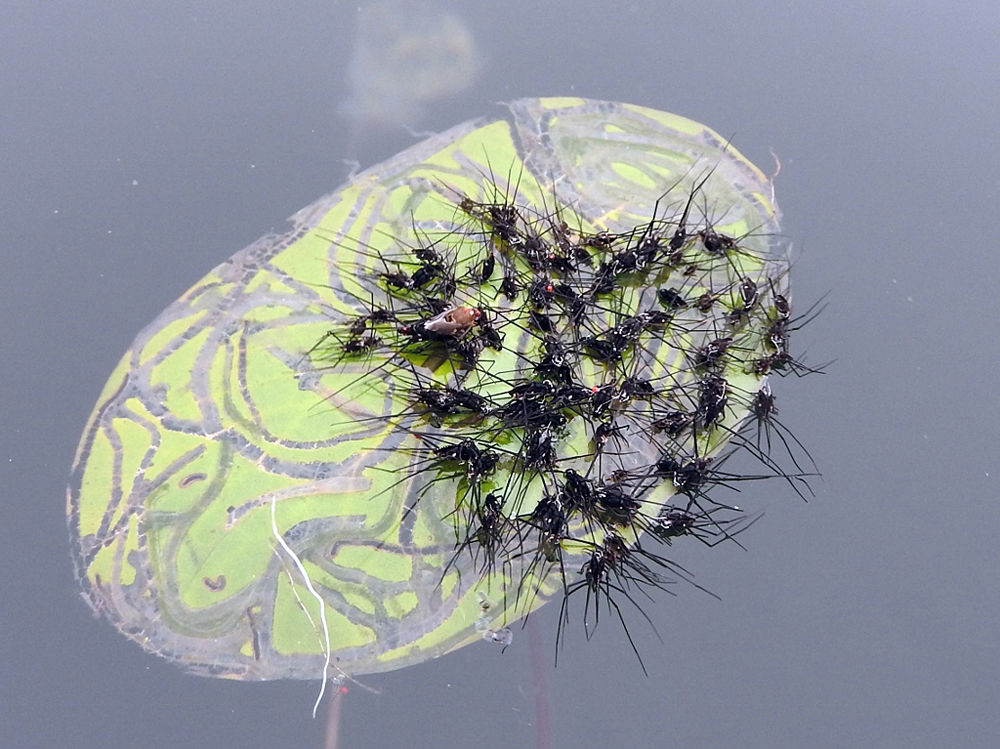 Young water striders crowd on to a water shield leaf. I wonder, are they taking a break to be warmer, and drier, and hide from underwater predators just like the loon chicks?

Loon chicks ride on their parents back during their first two weeks of life. It’s warm, it’s safe, and it’s dry.

Young water striders crowd on to a water shield leaf. I wonder, are they taking a break to be warmer, and drier, and hide from underwater predators just like the loon chicks?

The kayak rocked gently as I lowered myself in. With a few paddle strokes I was gliding away from shore, but mosquitoes still buzzed around the netting of my bug jacket. On this calm, humid morning, the bug jacket was a sanity saver.

I don’t usually get out on the water this early, but today I was on a mission. This summer is the Loon Population Survey that LoonWatch at Northland College runs every five years. During the last survey in 2015, I counted loons on a single lake on my way to work. This year, with many of the regular survey volunteers reluctant to travel to their lake homes, I’ve added two new lakes to my list. The official survey will take place between 5:00 a.m. and 10:00 a.m. on Saturday, July 18. But will I really have time to do all of that driving, loading and unloading the kayak, and still spend quality time on each lake? This trial run would help me figure that out.

On the glassy lake, which reflected an overcast sky, I noticed a thick sprinkling of tiny insects. They parted for my bow, and we both created ripples as we moved. As I nosed through a patch of water lily leaves, though, I was startled to see that some of the leaves bristled with clusters of these black critters. With a gangly pair of legs splaying out from their midsection, and a more streamlined pair of legs trailing behind, I could barely discern their short front legs from the rest of their body. Curved antennae arched like sheep horns away from the heads. Some water lily leaves only sported a fringe of these leggy critters, while other, smaller, water shield leaves were completely hidden beneath the invertebrate stubble.

Later, I would discover that these are young water strider nymphs. Unlike butterflies, who transform from egg, to caterpillar, to chrysalis, and then adult, water striders go through incomplete metamorphosis. Basically, they shed their exoskeleton five times over about two months as they grow, and look more like an adult each time. In all stages, water striders are excellent predators on mosquito larvae. The baby mosquitoes must breathe at the surface through a snorkel. Water striders can grab that snorkel, pull them up, and suck their juices. That’s poetic justice, don’t you think?

And while, from the perspective of a giant human, all those water strider legs looked like hair on the leaves, a closer look at those legs would reveal actual hairs. At a nanoscale, these microscopic hairs are covered with spiraling grooves that collect and remove water droplets. This prevents the water strider from getting soggy despite skating on surfaces with liquid below and high humidity above. Scientists hope to use this design to create water repellent surfaces through biomimicry.

I can’t zoom in to the level of those hairs, but I do love zooming in on my photos once I get them home. When I did, four tiny, red specks appeared in a cluster of striders on a water shield leaf. It took me a minute, but I finally connected the dots (so to speak) and realized that these were nymphs themselves — this time of water mites.

As tiny as adult water mites are, these spider relatives are straight-up predators. Their young, though, are parasites who attach like ticks to their hosts and sip bodily juices until they drop off and join their parents as predators. I’ve photographed dragonflies carrying the water mite nymphs around, and now these water striders, too. Before you start saying ew, or judging the mites’ lifestyle, please know that they also attach to mosquitoes. If a female mosquito has enough mites, they’ll prevent her from laying eggs. Does that change your opinion of them?

Here were mites on top of nymphs on top of leaves, with mosquitoes still buzzing around my head. But we’re not done yet. The leaves themselves held evidence of more life, in the form of squiqqly lines that looked black against the dark water. These are channels created by midge larvae as they feed. With weak mouthparts, they cut off a strip of the epidermis, scrape it clean of nutritious green cells, and then use silk to fasten the strip into a roof above their channel. This setup allows water to continuously flood the channel. The larvae breathe through gills and will die if they dry out.

When I finally looked up from that lively patch of weeds, I quickly spotted the loon I’d come for. At first it looked like a single adult, but as I coasted closer and zoomed farther, the hump on its back resolved into two fuzzy chicks. While I watched, the chicks wiggled and preened. I smiled, remembering the many times I climbed into my mom’s lap, only to be called a wiggle worm as I fidgeted between the desire to be cozy or to be active. Finally, one chick sprawled all the way across their parent’s back to take a nap, while the other chick floated nearby. These chicks must be almost two weeks old, which is the age they lose access to their private raft.

Here again, on this summer morning in the Northwoods, was life on top of life.

I found the loons. I found much more.

(And yes, even with distractions, I had plenty of time to survey all three lakes.)