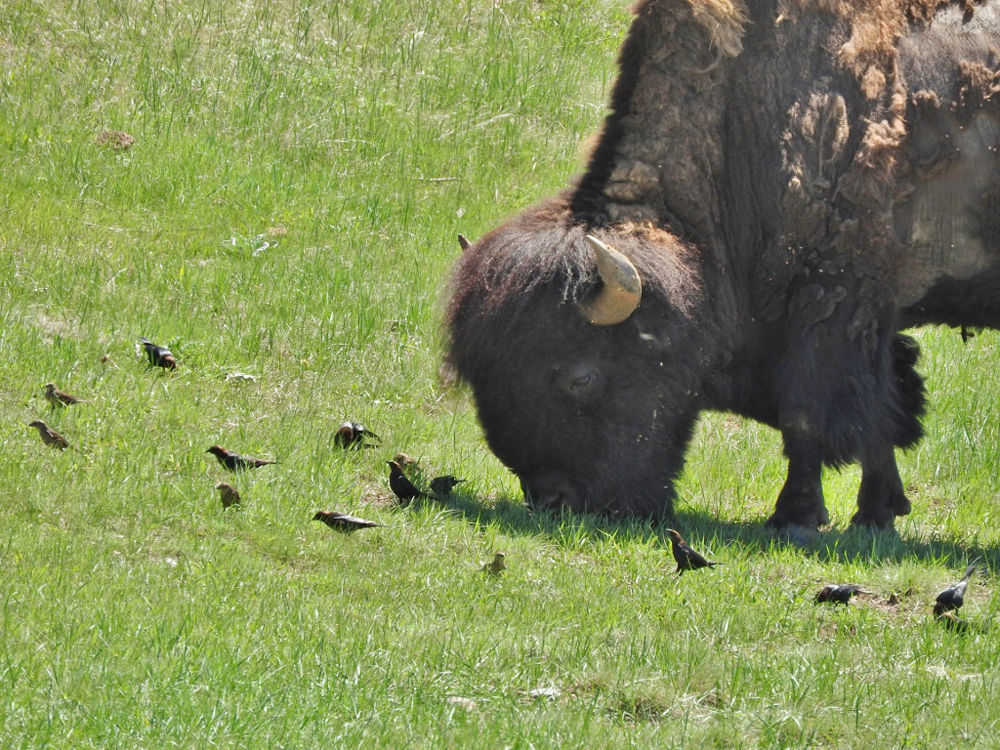 Brown-headed cowbirds feed on insects that bison stir up as they graze, as well as seeds turned up by the bison' heavy hooves. 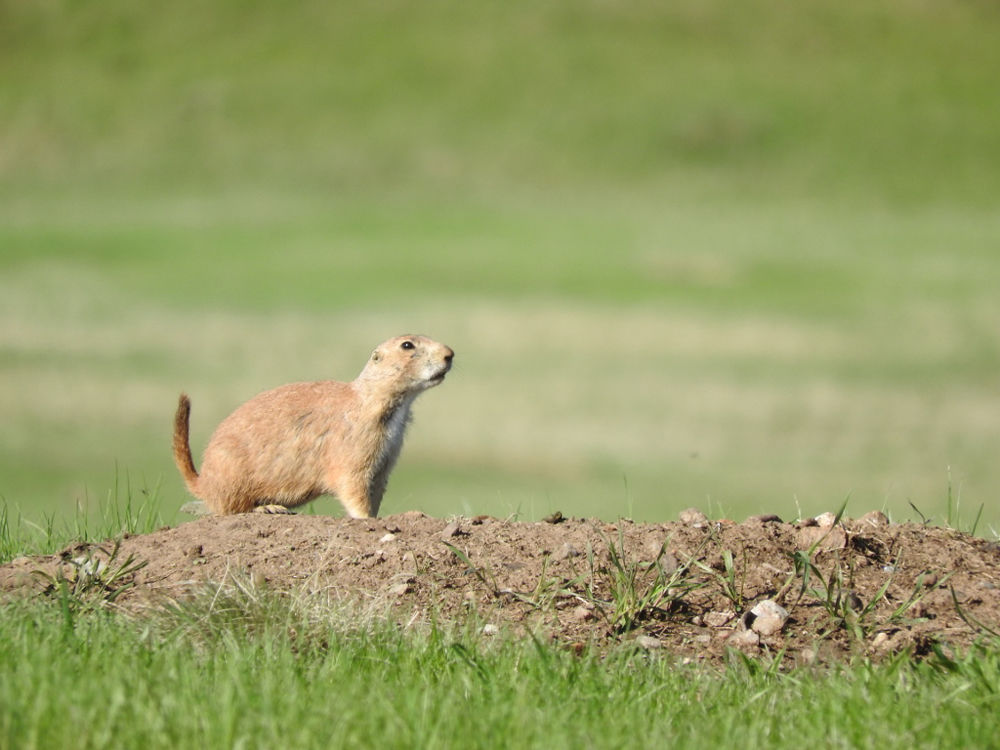 Prairie dogs shouted their alarm calls at me across the windswept prairie.

Brown-headed cowbirds feed on insects that bison stir up as they graze, as well as seeds turned up by the bison' heavy hooves.

Prairie dogs shouted their alarm calls at me across the windswept prairie.

I recently received a photo of a cowbird egg in a red-eyed vireo nest, so I'm re-sharing this article from 2018 — written when I was on my way to Alaska.

My hike on the Centennial Trail in Wind Cave National Park in western South Dakota had been wonderful. I felt like Laura Ingalls Wilder as I strolled over the rolling prairie hills, dodged buffalo chips on the trail, and photographed wildflowers taking advantage of spring. Thankfully, the hot sun was offset by a cooling breeze.

Twice the trail ran right through the center of prairie dog towns. Their alarm calls were incessant and pushed before me in a wave, with the closest little rodents chattering from out of sight inside the entrance to their burrow. The bell-like tones of meadowlark calls rang out across the prairie, and repeatedly I searched for the vocalists who sounded much closer than their actual perch. The volume of their songs was impressive.

The prairie's wide open horizon seems to encourage restlessness. Back at my car, I quickly settled in for an afternoon of driving west. Pa Ingalls would have understood the feeling.

I didn't get very far, though. Where the park road met the highway, a pair of bison grazed on the shoulder. If it was just those two great, shaggy beasts, I might not have stopped, but around their heads fluttered personal flocks of brown-headed cowbirds. The shiny black birds, with namesake brown heads, pecked at the ground right in front of the bisons' giant heads, played leapfrog over their humped backs, and generally acted just like brown-headed cowbirds are supposed to act. Glad that no one was with me to roll their eyes at my excitement, I swung onto the shoulder, rolled down a window, and picked up my camera from the passenger seat.

Now, brown-headed cowbirds are not my favorite animals. My parents and naturalist friends have always given them the evil eye. Arthur Cleveland Bent (an acclaimed ornithologist of the early 1900s) called the cowbird a "shiftless vagabond and imposter." Its scientific name, Moluthrus ater, means "dark greedy beggar." While they are native to the Great Plains, they have a bad reputation as lazy villains who parasitize the nests of more praise-worthy songbirds.

Female brown-headed cowbirds lay their eggs in the nests of smaller birds and let other parents do the hard work of feeding their hungry chicks. Cowbird eggs hatch first, and their chicks grow faster than the others. By virtue of being the tallest mouth in the nest, the cowbird babies get more food. Their gain is another's loss, and their success comes at the expense of one or more of the host mother's own young.

While most birds don't seem to recognize the cowbird eggs or chicks as alien invaders, some do. House wrens puncture cowbird eggs. Yellow warblers build a new nest right on top of the invaded one-smothering their own eggs as well. Robins, catbirds, and a few other birds with big beaks toss out the strange eggs. I feel like giving them all a high-five for not being duped.

But on a birding walk last spring with Laura Erickson-a wonderful Duluth-based birder, author, educator and scientist-I gained a whole new perspective on the cowbirds' predicament.

These maligned birds once depended on the bison's feeding to flush tasty insects, and on their heavy hooves to break up tough prairie sod, which made seeds available despite the birds' scrawny feet. The problem was that bison herds moved regularly, and the birds had to follow. That transient lifestyle wasn't conducive to settling down and raising a family. The cowbirds' only option was to deposit their eggs in the nests of birds who could find food even without the bison, and hope for the best.

Hope isn't their only strategy. A female cowbird lays about one thick-shelled egg each morning, and can lay forty or even sixty eggs in a season. Using radio-tagged birds, scientists discovered that females will spend the morning in nest-rich habitats like forests and edges. They may silently observe potential hosts in preparation for a "mission impossible"-style egg laying operation; walk around in dense ground cover looking for nests; or fly noisily through the shrubs hoping to flush a mother and home in on a target. They spend their afternoons foraging in more open habitats. Sometimes they'll even return to a parasitized nest to check on and feed their own young. Once fledged, the young cowbirds instinctively seek flocks of their own kind.

This worked out pretty well when there were still plenty of bison moving freely across the plains. Nomadic cowbirds rarely parasitized the same nest repeatedly, so their songbird hosts recovered easily from the reproductive setback. The problems came when pioneers settled the plains and replaced nomadic bison with fenced cattle, tilled farmland, and backyard feeders. The birds adapted well to the new scheme, which allowed them to spread east into new territory, where songbirds weren't used to their skullduggery-which could now be concentrated instead of scattered. Their success came at the expense of their reputation, though, and cowbirds are now an unwelcome visitor in backyards from California to Maine.

Is it really their fault? Like so many animals, they evolved to live in a world that we have changed almost beyond recognition. But there, on the side of the road surrounded by vast prairies and restored herds, they were behaving exactly like they should. They still aren't my favorite birds, but for just a moment I could really appreciate the cowbirds' place in the world.

Then-restless as ever-the two bison moved on. I put down my camera, rolled up the window, and continued west.