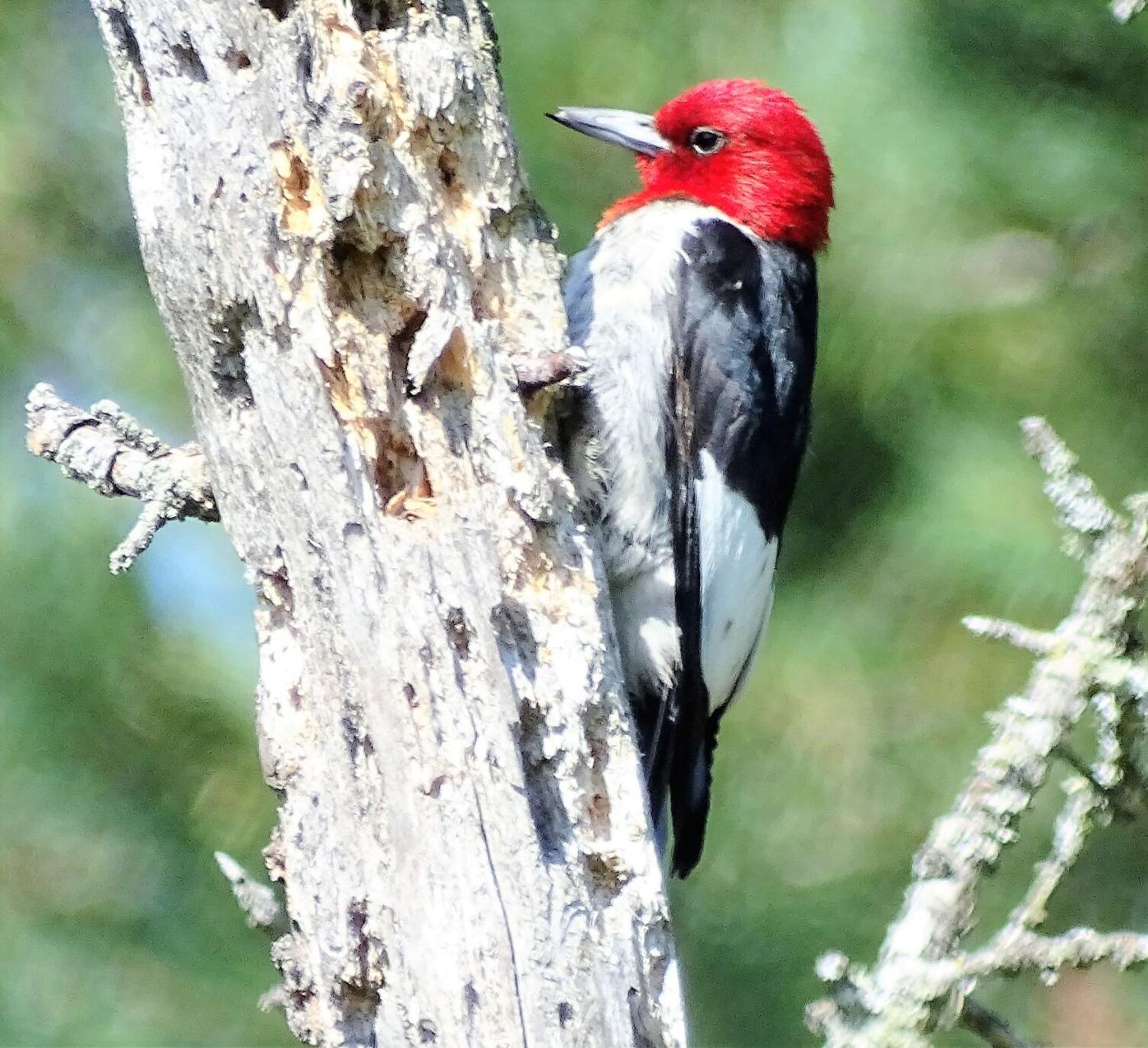 An adult red-headed woodpecker visited the Nature Education Center in Fifield for the first time, Aug. 6, 2020, since bird records were kept. 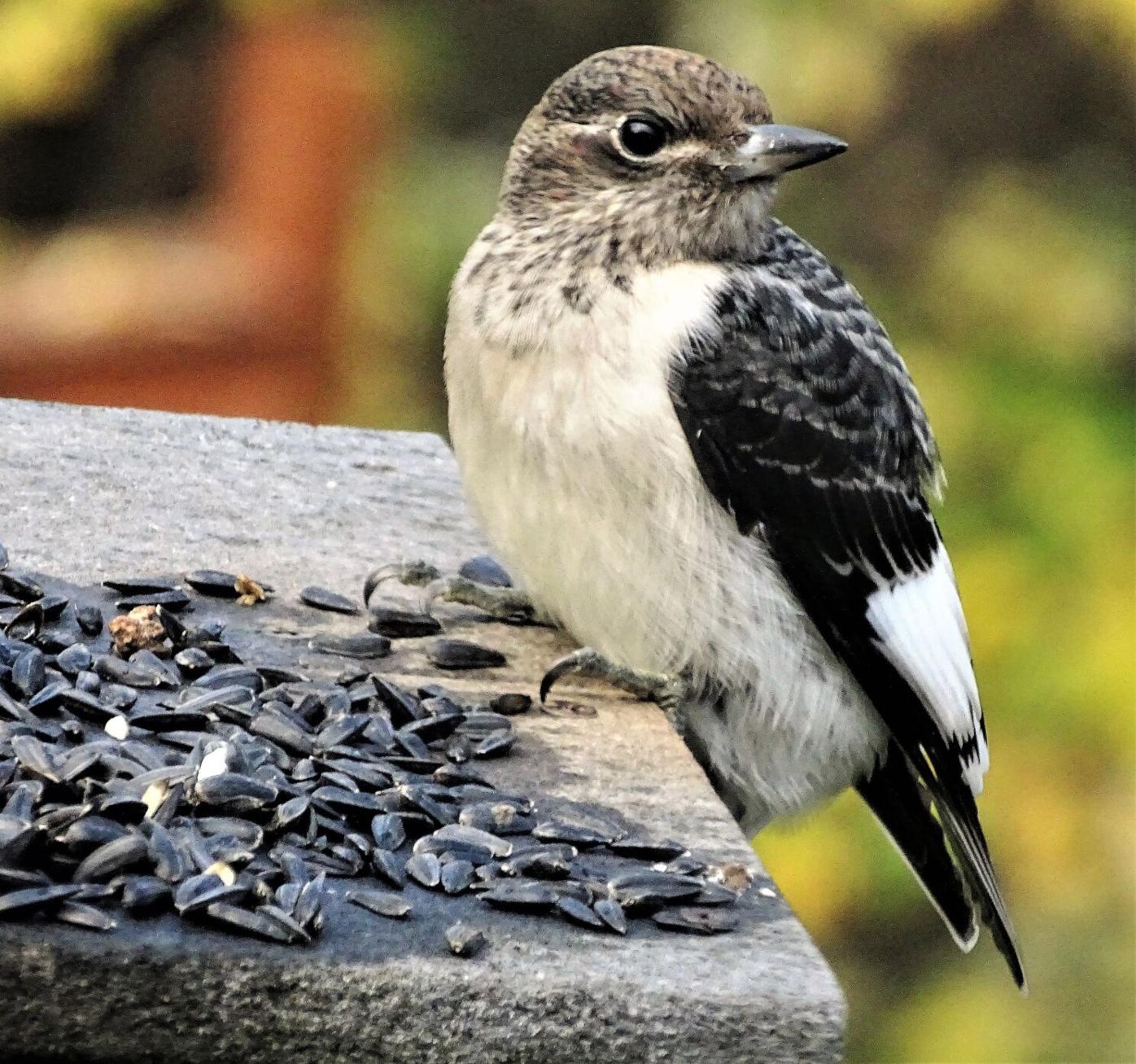 This juvenile red-headed woodpecker visited the Riel’s bird feeder in Fifield along the South Fork Flambeau River many times during the week of Sept. 27, the first time they have ever observed at their place.

An adult red-headed woodpecker visited the Nature Education Center in Fifield for the first time, Aug. 6, 2020, since bird records were kept.

This juvenile red-headed woodpecker visited the Riel’s bird feeder in Fifield along the South Fork Flambeau River many times during the week of Sept. 27, the first time they have ever observed at their place.

We were sitting at our kitchen table Aug. 6 having breakfast when we caught a fleeting glance out our window of a bird with a bright red head contrasting with a black back, white underparts and secondary wing feathers flying across our lawn to a dead larch tree at the end of our yard. I picked up the binoculars, always ready for use, to see what kind of bird it was and, sure enough, it was a red-headed woodpecker. Although I had seen them many times in southern Wisconsin, especially in dead trees found along the Wisconsin River bottoms and in mature woodlots with dead trees, it was the first time we had seen one at our Nature Education Center here in Fifield. The plumage of both sexes is identical.

I was eager to document the sighting with my camera, but I had to shoot into the sun, so the first pictures were poor, but I wanted to get some before the bird left. Fortunately for us, the bird remained most of the morning. It was so intent on feeding that I was able to sneak up on it using vegetation as a shield and I was able to take some photos in better light.

It acted like a flycatcher. It would fly up in the air to catch insects like our Eastern phoebes do and return to the dead larch numerous times to eat its quarry. Sometimes it would even fly to the ground to snatch up insects like Eastern bluebirds do and then return to the dead tree to eat them. Normally, most woodpeckers peck at dead trees in search of insect food, but this one did that only occasionally while we watched it finding it more lucrative to catch insects in the air and on the ground.

Since that event, Larry Gregg reported that he spotted an adult red-headed woodpecker at his feeder in Park Fall on May 25, a first for his yard too. During the week of Sept. 27, Mike and Becky Riel, who live along the South Fork Flambeau River in Fifield, reported a strange looking bird coming to their feeder. I rushed down to their home and found a juvenile red-headed woodpecker was enjoying sunflower seeds on their deck feeder and had been coming for several days off and on. So, to have three sightings of this uncommon woodpecker in our area was a welcome treat, so I thought I would tell you more about this interesting woodpecker.

The red-headed woodpecker isn’t just any ordinary woodpecker. It has a voracious appetite; almost anything is fair game for this active woodpecker. This omnivorous woodpecker forages in trees and on the ground, feeding on anything from small birds, bird eggs and mice to insects, fruits and seeds. They can be readily attracted to bird feeders with whole corn kernels and sunflower seeds. Its wide range of prey includes earthworms, crickets and wasps. After pecking away at dead tree bark, the bird uses its long, barbed tongue to extract insects, including beetle larvae. For larger animal prey, such as mice, the bird pounces on its victim and pecks it with its bill. Besides nuts and acorns, the woodpecker stores in shallow tree cavities for winter use, the bird also caches various fruits, including grapes, cherries, and apples.

Red-headed woodpeckers are not as common in northern Wisconsin as they are in central and southern Wisconsin where they are a common migrant and resident. Northern populations will migrate south from August to November and return north in March. During short-distant migrations, red-headed woodpeckers color the sky with a spectacular display of crimson as they travel in flocks of several hundred birds. They also display a unique bobbing style of flight in which birds appear to rise and fall several times.

Breeding bird surveys, including those in Wisconsin, show the species is declining throughout its range due to the loss of its favorite woodland habitats and dead trees. With a preference for open country where dead trees and snags are plentiful, the red-headed woodpecker frequents mature lowland forests with plenty of dead trees for nesting with some open undergrowth. Other types of habitats include various types of wooded savannas, open woodland, pine forests, villages, suburbs, orchards, and agricultural lands.

The red-headed woodpecker benefited from chestnut blight and Dutch elm disease outbreaks of the twentieth century. Though these diseases devastated host trees, they provided many nest sites and foraging opportunities for the woodpeckers in the resulting dead trees.

During the breeding season, starting in May in Wisconsin, the male red-headed woodpecker will excavate the nesting site, a cavity 8-24 inches deep in a dead tree, but will also use nest holes in artificial structures such as utility poles, fence posts and buildings as long as the nest hole is 1.75 inches in diameter. Drumming is part of the courtship activity and pairs will often perform mutual tapping with one bird inside the hole of the tree and the other tapping by the entrance hole.

The male is monogamous. The female will lay four to seven white, glossy eggs on a layer of fine woodchips, and both sexes will incubate the eggs for 11-13 days. Both parents will feed and care for the hatchlings until they are ready to leave the nest after about 30 days. If the eggs are taken or destroyed, the persistent pair will produce more and sometimes even raise a second brood. One persistent female laid 32 eggs in a season before successfully raising a brood! Juveniles have a brown head, a dingy belly, and a blackish, brown back like the one Riels reported in Fifield.

Red-headed woodpeckers can live as long as 10 years and are protected by the Federal Migratory Bird Treaty Act of 1918.

Last week’s column on the Round Lake Logging Dam said the Doering family purchased the dam and land in the early 1990s. The land was actually purchased in 1902.

The private Nature Education Center in Fifield operated by Tom & Mary Lou Nicholls is open seasonally by appointment only.