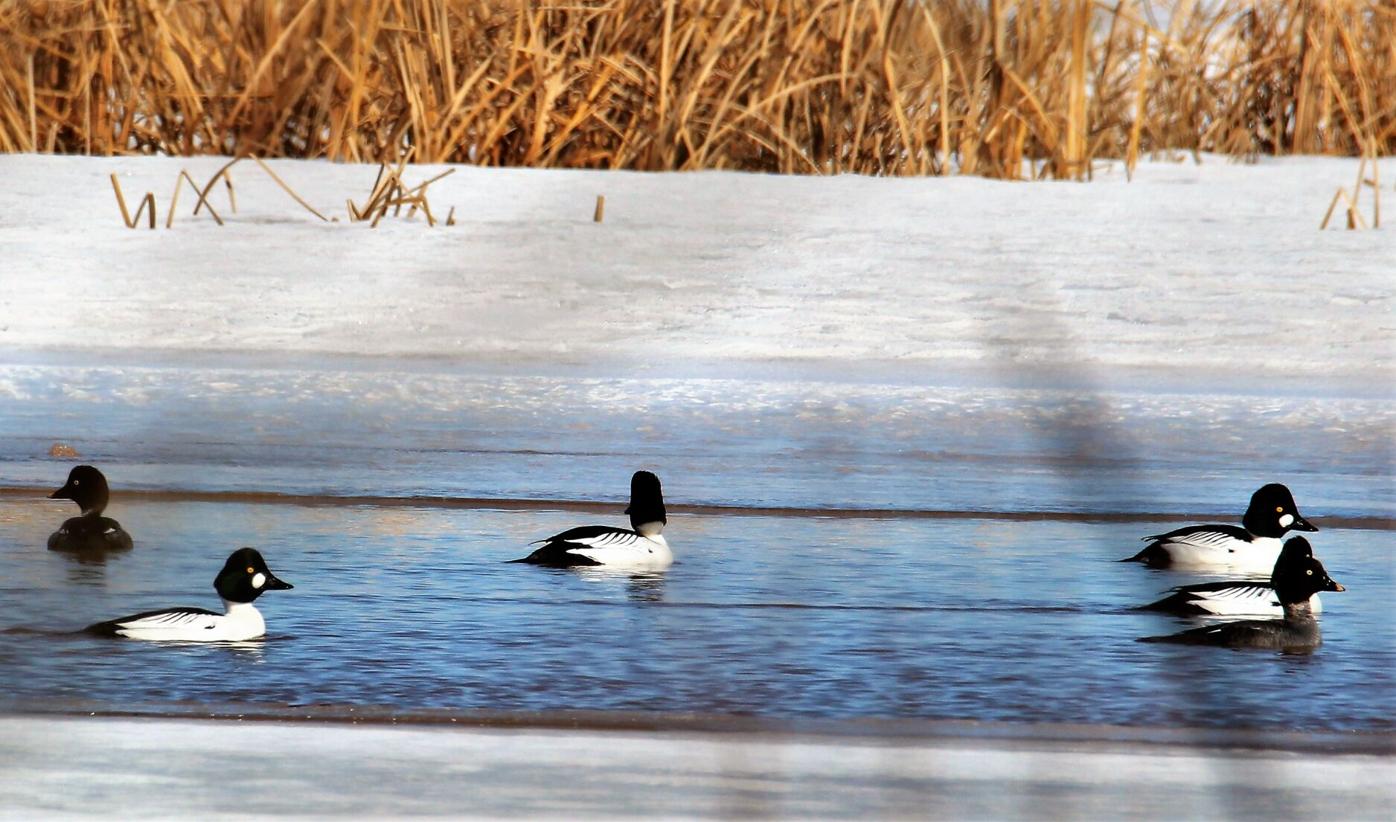 Common goldeneyes found a small patch of water near Ashland signaling that waterfowl migration will be underway as soon as more ice melts and water opens. 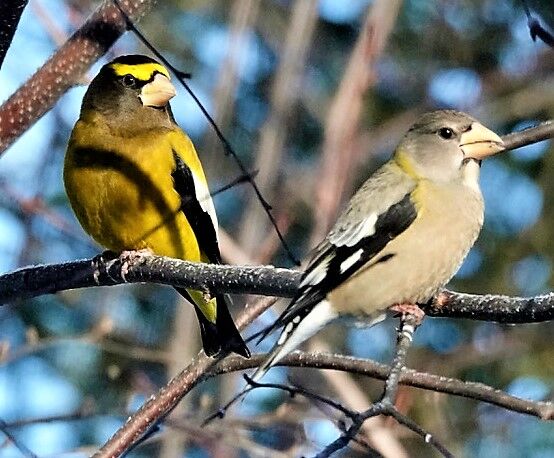 A pair of male and female evening grosbeaks at Sailor Creek Flowage near Fifield, March 6. Flocks of grosbeaks have been moving around the Northwoods this winter frequenting sunflower feeders where they eagerly gobble up lots of seeds to the delight of bird watchers who haven’t seen them in many years.

Common goldeneyes found a small patch of water near Ashland signaling that waterfowl migration will be underway as soon as more ice melts and water opens.

A pair of male and female evening grosbeaks at Sailor Creek Flowage near Fifield, March 6. Flocks of grosbeaks have been moving around the Northwoods this winter frequenting sunflower feeders where they eagerly gobble up lots of seeds to the delight of bird watchers who haven’t seen them in many years.

Spring is in the air and local birds are giving notice! Back-capped chickadees and northern cardinals are singing their spring songs. Pine grosbeaks and snow buntings are bulking up their fat supplies that will fuel them on their long return migratory journey to their far north nesting grounds in Canada. Carol Merten had a flock of pine grosbeaks last week on Burtle Rd. near Park Falls.

Sue Kartman had a flock of over 40 evening grosbeaks on and off consistently at her feeders this past week on Sailor Creek Flowage. Laura Agostini spotted two pair of trumpeter swans drop by the Flowage only to find ice and no water on March 7, so left, but I am sure they will be back when some water opens up. Sally Nez reported three tumpeter swans in Phillips as well. Sandhill cranes have been heard flying overhead. Bake Richard spotted some mallards and common goldeneyes on small patches of open water at Prentice Park in Ashland.

For more of what is happening elsewhere in the state, here is a report from Wisconsin DNR Natural Heritage Conservation Program Biologist Ryan Brady.

“Ready for spring? We have good news for you – in the bird world, it’s underway! Southeast Wisconsin always sees the first migrants, and this year is no exception as the first red-winged blackbirds, killdeer and sandhill cranes have been reported there. American robins overwintered in good numbers, but new migrants are also moving in now. Horned larks, an early migrant of open grasslands and agricultural fields, are also showing well on rural roadsides. Farther north, trumpeter swans are returning to limited areas of open water, and the first bald and golden eagles have begun to wing their way northward overhead.

Other signs of spring include increased singing activity by northern cardinals, house finches, mourning doves, American robins and black-capped chickadees. Woodpeckers are drumming to announce territories and wild turkeys are now gobbling in some areas. Some species are even nesting already, including active incubation by great horned owls and bald eagles and nest-building behavior in American crows, common ravens, house finches and others.

Waterfowl migration has been most noticeable on Lake Michigan, where goldeneyes, mergansers, scaup, redheads, bufflehead and a few dabbling ducks are being seen. Snow and ice cover have limited migration inland so far, but a few new birds are slowly moving in. Gull diversity has been excellent as herring gulls are abundant and ring-billed gull numbers begin to increase. Among them, look for glaucous, Iceland, great black-backed and lesser black-backed gulls.

Winter is far from over, of course, and many winter species remain firmly in place, including a few snowy owls, northern shrikes, rough-legged hawks, short-eared owls and “winter finches.” Common redpolls have been widespread with a few hoary redpolls among them. White-winged crossbills and pine siskins have also been present in small numbers. Flocks of evening grosbeaks continue mostly across the north woods, while pine grosbeaks are often the first to depart and will begin to do so this week if they haven’t already. Be sure to regularly clean feeders, waste seed/shells and water sources to prevent outbreaks of salmonella and other diseases among these susceptible species.

Rarities have been few of late. In the south, spotted towhees continue to be seen in numbers well above average. In the north, more great gray owls have been documented this year than any since the mid-2000s. Keep your eyes open for these unusual species and report your observations of rare and common birds alike at www.ebird.org/wi. Enjoy the birds!”