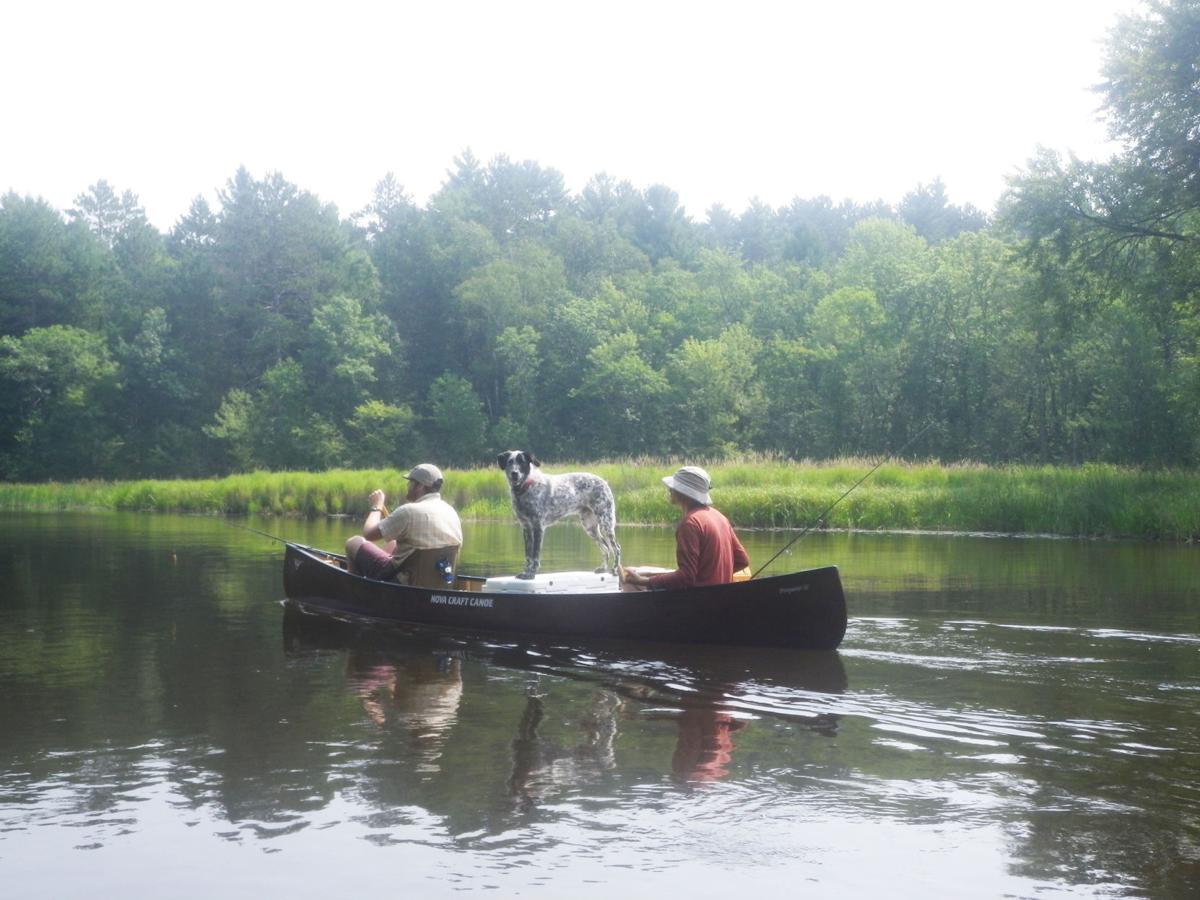 This is not Walter. This is Aldo, who clearly is very comfortable in a canoe. 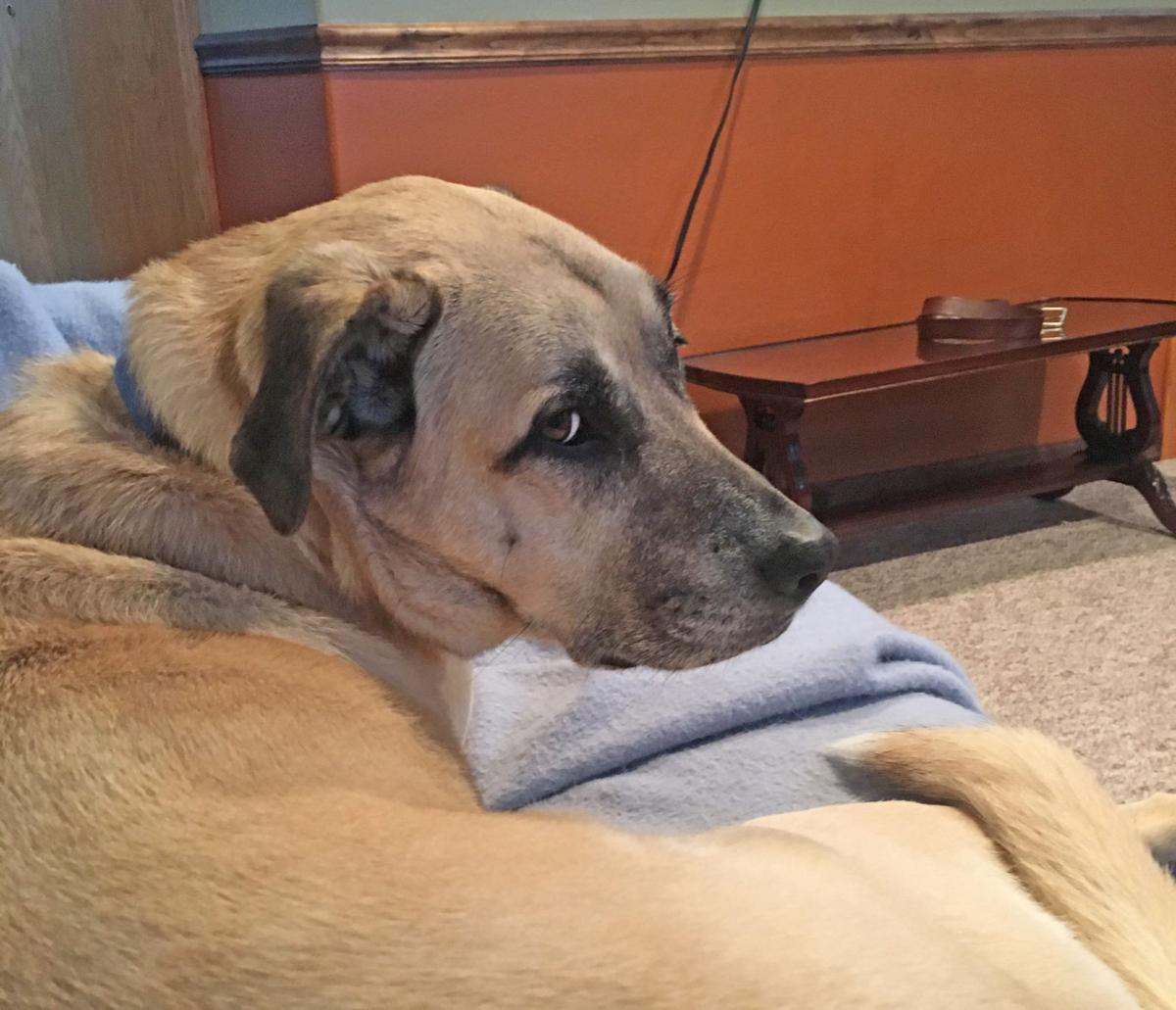 This guilty looking fellow is Walter. The photo was taken at a later date, but even here he seems to be suspicious that he’s going to be put back into a canoe.

This is not Walter. This is Aldo, who clearly is very comfortable in a canoe.

This guilty looking fellow is Walter. The photo was taken at a later date, but even here he seems to be suspicious that he’s going to be put back into a canoe.

It is an immutable fact that as we enter adulthood, life becomes more complex. For many, including myself, the progressive addition of responsibilities, like relationships, kids, full-time jobs, and homeownership, shrinks free time down to a precious tiny amount. This story is about trying to make the most of that time and having it turn into a raucously delightful disaster.

In July of 2018 my college roommates and I planned a weekend canoe trip on the Namekagon River. I had the date circled in my mental calendar for months, escaping to thoughts of fishing and comradery when work got frustrating or kids were screaming for reasons I could not understand. The group consisted of myself, Kaz, Eddie, and Nick. We assembled in Hayward and immediately picked up where we’d left off the last time we’d seen each other nearly a year ago. It was going to be a great trip. The weather was perfect. Our plan was perfect. And then it all started to fall apart.

It started with the dogs. Eddie asked if he could bring his dog Aldo along. Eddie is an avid outdoorsman, and Aldo had been on many adventures, always performing admirably. When Nick heard that dogs were coming on the trip, he asked about bringing his dog Walter. Unlike Aldo, Walter had never been on any adventure like this before, but how bad could it be?

Early Friday afternoon, we slid our gear-laden canoes into the shimmering Namekagon water. Nick and I shared a boat, with Walter in the middle. Walter started fidgeting immediately. We were no more than five minutes down the river when Walter jumped. It was not a graceful jump. It was more a careening flop over the gunnel. Nick hollered, “Walter!” as I frantically back-paddled to catch him. Eddie and Kaz laughed at the scene, while Aldo sat comfortably in their canoe, maybe even looking a little bored.

Walter jumped out of the canoe over, and over, and over. We never understood why Walter jumped. He didn’t want to go swimming, and he wasn’t trying to run away. It seemed like he just really wanted to be anywhere other than in the canoe. This was something I wish we had explored a bit before the decision was made to bring Walter on a three-day, 24-mile canoe trip.

With a large dog regularly careening into the water, it was difficult to catch fish as we floated along. I managed a smallmouth or two that first afternoon. I assured myself that the real fishing would happen in the evening, when we would find the perfect campsite along a deep hole and could put out rods while we made camp. A nightcrawler on the bottom of the lower Namekagon can catch anything from catfish to redhorse, and the action is often fast and furious.

But you have to find the right spot. And as it turned out, the bigger issue was finding any spot at all. It was a busy weekend on the river, and each campsite we encountered was already claimed. We paddled on and on as the daylight faded, hoping that around the next bend we’d see our perfect site. But the perfect site never came.

We finally settled for a very unappealing spot. It was low-lying and buggy. Worse yet, the fishing opportunities nearby were almost non-existent. My fishing dreams would have to wait for the next day. We ate a filling dinner and swatted mosquitos. Then we set up our tents and swatted mosquitos.

We turned in for the night, hoping to get a good rest to hit the river early and finally catch some fish. Then, just yards away from us, came something that sounded like a cannonball hitting the water. It was the angry slap of a beaver’s tail. It was not happy we were there, and it spent several hours trying to communicate that to us, each time startling me from slumber.

Day two brought all the hope and optimism that comes from looking forward to a full day of fishing and no other responsibilities. Walter kindly waited about 20 minutes before making his first leap of the day. “Walter!” yelled Nick. And unfortunately, once again “Walter!” became the soundtrack of the day, and not “Fish on!”

Eager to avoid a campsite debacle like the previous night, we made the controversial decision to set up camp at 2 p.m. It was an ideal spot we couldn’t pass up. There was a massive sand flat where we swam and threw a frisbee for a good chunk of the afternoon. There was also a deep hole to fish. And it was there that I made one of the most remarkable catches of my life.

I got a bite and set the hook. An 11-inch smallmouth launched out of the water. But moments later, the weight of the fish seemed to increase considerably. I kept playing the fish, but as it got closer it became clear what had happened. A 30-something-inch musky had grabbed onto the smallmouth. As I watched, the smallmouth wriggled out of the musky’s mouth, but the musky kept chasing after it and grabbed it again. The musky was so locked in on the smallmouth that it didn’t notice me standing waist-deep in the water, now just several feet away. I slowly brought the two fish towards me, and with a spearing grab I snatched the musky right out of the water with my free hand. And there I stood, beaming triumphantly, smallmouth and rod in one hand, musky in the other. It was a rare non-disastrous moment of the weekend.

But true to our style, we returned to our calamitous ways. Nick was as red as a tomato from sunburn by the end of the day. To make matters much worse, he attempted to dry out his sandals by the fire that evening, only to forget about them and have them melt! Half of each sandal curled up from the heat, making them completely unwearable.

On Sunday we limped off the river, some of us barefoot and all of us sun-crisped and tired. Walter made one of his more impressive escapes, nearly flipping our canoe and eliciting the most-angry string of “Walter!” yells of the whole weekend. We started loading the canoes onto my vehicle, only to find that the canoe carrier had broken, which felt fitting.

Another group of canoers took out shortly after us. They must have been a mile or two behind us for most of the weekend. We made small talk with them about fishing as we shuttled gear around. Walter had made his way down to the water for a drink. Nick called him back with “Come here, Walter. Let’s go!”

One of the other canoeists said excitedly, “Oh, THAT’S Walter!? We’ve heard your name a lot this weekend!”