You are the owner of this article.
Edit Article Add New Article

Frost Advisory from 2AM CDT SUN until 8AM CDT SUN

Rice Lake City Council approved a resolution Tuesday inviting businesses to reopen ahead of the May 26 timeline of the Safer At Home order issued by Gov. Tony Evers.

With the Council locked at 4-4, Mayor Mike Diercks cast a rare tie-breaking vote to allow for reopening. The decision stands in contrast to the advice of the Barron County public health officer and sheriff, who both stated during the virtual meeting that they intend to uphold state orders during the coronavirus pandemic.

The exact details and timeline of the city’s resolution to reopen businesses and public offices are not fully formed. But the resolution appears to allow all businesses to re-open, and advises city police to enforce state laws at their own discretion.

The resolution advises businesses to follow public health guidelines to determine the safest practices for reopening. Restrictions continue only for bars and restaurants, which may not open before May 11 for dine-in service.

Diercks introduced the agenda item one day prior to the meeting.

“Our local businesses need some help,” he said. “A lot of this business are sole proprietors—not big corporations. We need to do whatever we can to help these businesses go forward.”

Diercks said he had been told by several businesses that if they could not reopen soon, they risked not reopening at all.

“The problem is we are so limited in our testing capabilities,” said county public health officer Laura Sauve.

While Mayo Clinic has testing, other health care providers have not been able to obtain adequate testing supplies, she said. Sauve said she was also concerned about recent outbreaks at meat processing plants, saying Jennie-O in Barron could be susceptible to such an outbreak.

Six people in Barron County who tested positive for COVID-19 have recovered, and people are still being tested every day. More than 700 tests have come back negative for COVID-19 in the county.

Sheriff Chris Fitzgerald said, “Until we get more testing we can’t go against the governor’s order.”

When asked by Diercks if county deputies were prepared to come into the city and enforce the order, Fitzgerald said yes.

Fitzgerald said he was bound by law to follow state orders, unless a court challenge against the governor’s policies is successful.

“With a swipe of a pen I can be taken out of office if I do not abide by the governor’s orders,” he said.

Rice Lake Police Chief Steve Roux agreed that the nature of police is to enforce laws, but he said he felt there was some ambiguity about which businesses are essential or non-essential.

The City’s resolution was largely drafted by its contracted legal counsel Arnold Koehler, who questioned the legality of the governor’s order.

He said not allowing people to use their assets for the purpose of gaining income is depriving people of property without due process. He said the order also infringes on people’s right to assemble.

“We’re really not listening to what our experts are saying,” said Dorrance.

He said the state is laying a plan for easing the COVID-19 precautions, including the recent opening of more businesses and parks.

“I think we’re putting our officers in somewhat of a quandary. We just don’t know enough. I think we could be putting people in jeopardy,” said Dorrance.

Alderman Cory Schnacky said, “This is about putting the power back in people’s hands.”

The meeting was held via video conference, and was disrupted periodically by technical difficulties. No comments from the public were allowed during the meeting.

The resolution is based on a plan enacted by the City of Hartford in southeastern Wisconsin, which is allowing all of its businesses to be open.

Click the PDF below for the full wording of the Rice Lake resolution. 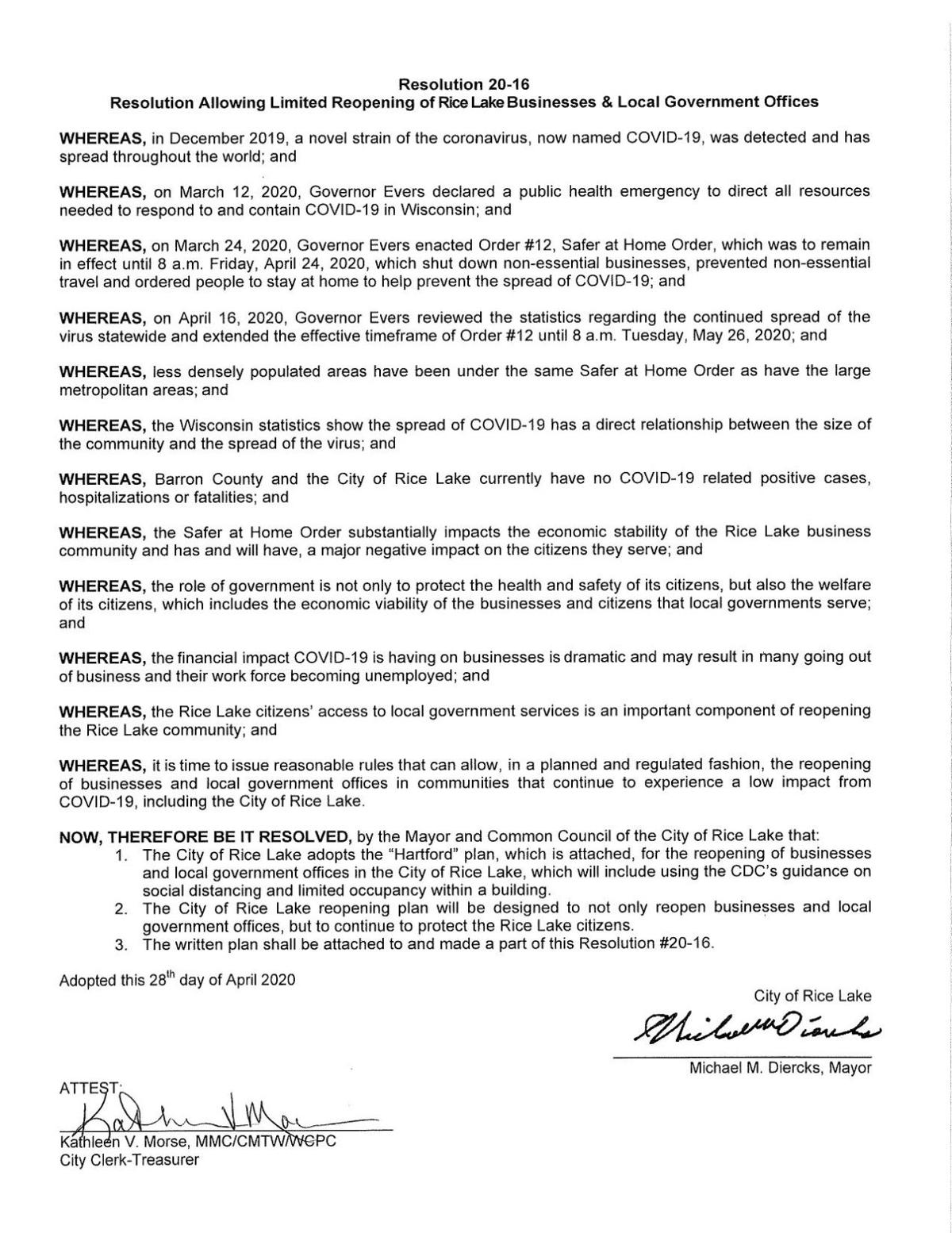 Here is the Hartford plan: https://ci.hartford.wi.us/DocumentCenter/View/4793/Planned-Rollout-of-Life-After-Panemic-updated-4292020?bidId=