You have permission to edit this article.
Edit
Home
Subscribe
Classifieds
Publications
Weekly Print Ads
Get and Submit
Advertise with Us
About APG Media of WI
Employment Opportunities
1 of 2 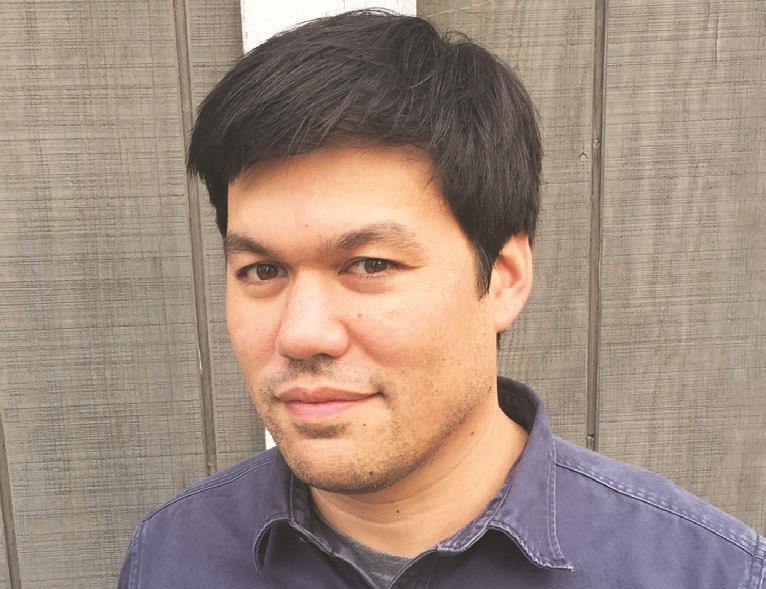 New author Keith Lesmeister, one of two writers to be hosted by the Apostle Island Booksellers at a book reading/signing on June 29 (The other author is Peter Geye). Lesmeister has relatives on Madeline Island and has been a frequent visitor to the area for years. 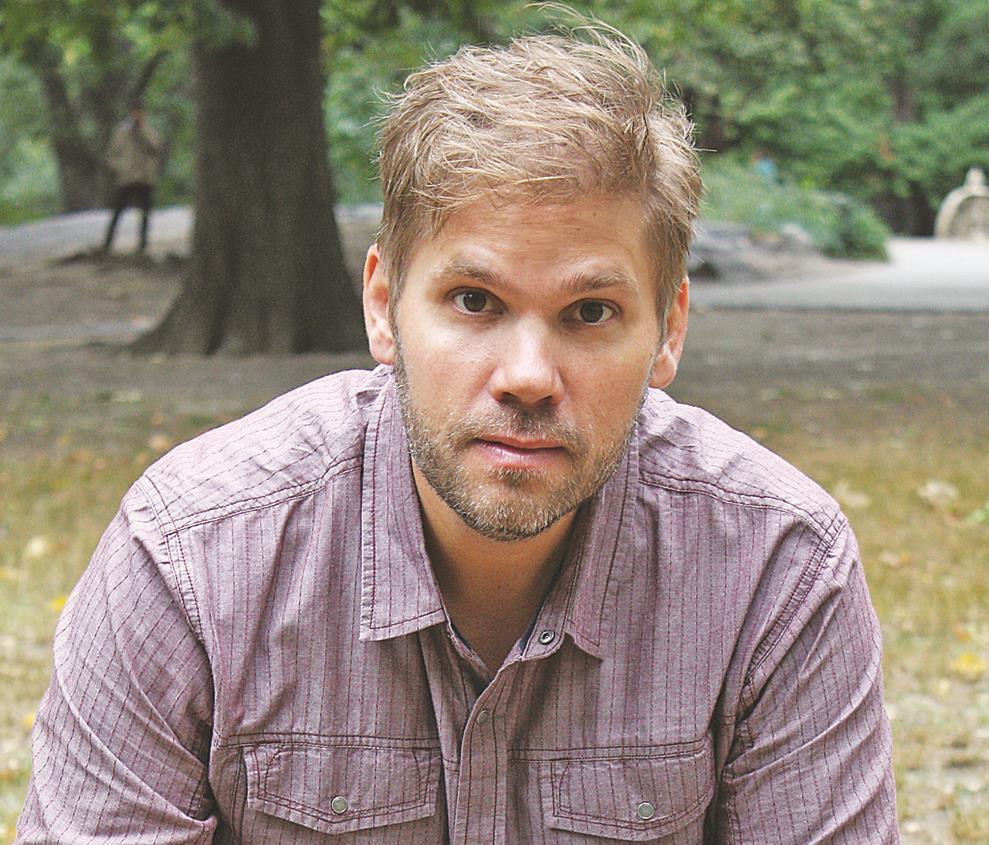 Award-winning author Peter Geye returns to Bayfield to introduce his friend Keith Lesmeister and also promote his own book, "Wintering" now in paperback.

New author Keith Lesmeister, one of two writers to be hosted by the Apostle Island Booksellers at a book reading/signing on June 29 (The other author is Peter Geye). Lesmeister has relatives on Madeline Island and has been a frequent visitor to the area for years.

Award-winning author Peter Geye returns to Bayfield to introduce his friend Keith Lesmeister and also promote his own book, "Wintering" now in paperback.

BAYFIELD â Looking for summer reading suggestions? How about "We Could've Been Happy Here," (MG Press 2017), a book of short stories by emerging author Keith Lesmeister from Iowa. Or consider Peter Geye's best selling novel, "Wintering," (Penguin Random House 2016) now released in paperback. And it just so happens both authors are in town.

On June 29, the Apostle Island Booksellers (AIB) is hosting, "An evening of fiction with award-winning Peter Geye introducing Keith Lesmeister" at 5 p.m. inside the Madeline Island Ferry Terminal. As with similar AIB events, this one includes a reading, book discussion and signing, followed by a meet-and-greet with the authors complete with refreshments and ferry horns tooting in the background.

"Keith is a fabulous writer," said Geye on June 22. "Word by word and sentence by sentence, his work shines. The cumulative effect of all that lovely writing is that the stories take on an emotional depth that is uncommon. His stories are set in the Midwest, but they deal in the lives of people who could be from anywhere."

The first story, "Nothing Prettier Than This," depicts a day-in-the-life of a recovering drug addict who's babysitting a friend's farm. A divorced father of two children, the protagonist invites his girlfriend to join him on this adventure that doesn't just involve cows getting out of the pasture. It meanders through the meadows and backroads of a troubled past, while at the same time trying to herd the missing cows back home.

"The dairy cows slipped away without my noticing," the narrator says in the story. "They were nowhere to be seen. They say animals move toward food, but they're prone to take the easiest path. It made sense to me that I should try walking the gravel driveway. It wasn't loose gravel. It was packed-down and easy to navigate."

But life isn't easy for his characters. Mothers become alcoholics and die too young. Grandmothers don't exactly act like grandmothers. They smoke cigarettes and drink whiskey while on day-passes from the nursing home. Children grapple with what it means to have a soldier for a father fighting in Iraq for six years. Hard stuff. Other than the familiar settings, which mostly take place in his home state of Iowa, everything else comes from the author's imagination.

"The common writerly advice is, 'Write what you know.' The direction I took was to write what I don't know. The joy on the page is surprise and discovery in the narrative," Lesmeister said. "That's more likely to happen if I'm writing about characters I don't know."

He gets to know them on the page. Character-led rather than plot-driven,

at a certain point, like Geppetto's Pinocchio, Lesmeister's inventions come to life and begin to think and act on their own.

"If they go to the grocery store, I'm not pointing them down the aisle. They're walking down the aisle they want to walk down," he said. "But it would be disingenuous of me to suggest this is all sheerly of the imagination."

Short stories contain mini-plots, but differ from novels in that they don't always get tied up into neat packages by story's end, especially in this book. Lesmeister often tosses the imagination-ball back to the reader, having them complete the endings.

As far as structure goes, he doesn't use outlines. Instead he employs what he calls a skimpy first draft â skeletal versions of the stories-to-be. These minimalist drafts start out as 2,000-2,500 words, which he fattens up with livelier verbs and more concrete details, weighing in at a final 4,000-5,000 words. Some of his favorite writers include Jane Smiley, Marilyn Robinson, Elizabeth McCracken, Laurie Moore, and Geye.

"I met Geye in Decorah, Iowa, which is my hometown, when he gave a reading there. The bookstore owner took us both out to dinner. We became friends and have kept in touch," Lesmeister said.

They've done a couple of events together, Geye providing continual support for this emerging author as he navigates toward a more national landscape.

Lesmeister, 38, was born and raised in Cedar Rapids, Iowa. He graduated from Luther College in Decorah with a B.A. in English and an MFA from Bennington College in Vermont. He worked at Luther College as a staff member from 2001-2015 during which time he taught three semesters of creative writing classes. Currently he is married, has three children and teaches full time (entry-level comp courses) at North Eastern Iowa Community College just south of Decorah. He's also associate director of a high school program that runs in conjunction with the Bennington writing seminars.

Lesmeister began writing professionally 10 years ago after taking a community college class called "Restarting to Write." This inspired him to attend the Iowa summer writing festival in 2011, where he began to craft his first stories. In 2012, one of his stories was published in "Western Gothic," a literary journal in Chi cago run by MG Press. A few years later he met some representatives from MG Press at AWP (Association of Authors & Writing programs) in Minneapolis. They asked him what he was working on.

"I said, 'I have this clutch of stories I've been shopping around,' and they responded, 'Send it to us,'" said Lesmeister who added that his stories were a perfect fit, because the Gothic mission is to publish Midwest authors who write about the Midwest experience.

"Since my book was published on May 16 I've been gallivanting, taking a page out of Peter Geye's playbook, which is to visit as many places as possible connecting with people at independent bookstores and libraries. It's been a wonderful eye-opening experience," he said.

Next stop Bayfield with his mentor. AIB hosted Geye in June 2016 after "Wintering" was first released in hardcover. A continuation of his second novel, "The Lighthouse Road," his newest book takes the Eide family of Gunflint, Minnesota further into the frozen depths of the American landscape and human heart.

Christine Brunkhorst said in the Minneapolis Star Tribune, "If Jack London's Yukon tales married William Faulkner's Yoknapa tawpha County's blood battles, their thematic and geographic offspring would be Peter Geye's "Wintering". . . There's a lot to love about this novel: the beauty of the wilderness, the tenderness of relationships, the craft. . . [There] is the feeling you get at the funeral of a loved oneâ how you ache to hear the stories you never knew so that you might round out the man. . . But in the sharing of stories there is healing, if not complete comprehensionâand that, it seems to me, is the point and triumph of this novel."

Confronting the darkness within and without, healing old wounds and extracting the truth at whatever cost drives this plot forward.

AIB says in its latest newsletter, "Capturing the strength and mystery of characters who seem inextricable from the landscape, Geye's novel is an unsentimental testament to the healing that's possible when we confront our bleakest places."

Geye was born and raised in Minneapolis and still lives there with his wife and children. He received his MFA from the University of New Orleans and his PhD from Western Michigan University, where he was editor of Third Coast. He is the author of multiple award-winning novels, including "Safe from the Sea," "The Lighthouse Road," and "Wintering."

Stop by to meet these authors on June 29 and pick up a signed copy of their books from AIB, one of very few independent bookstores still hosting writers and supporting the literary arts.