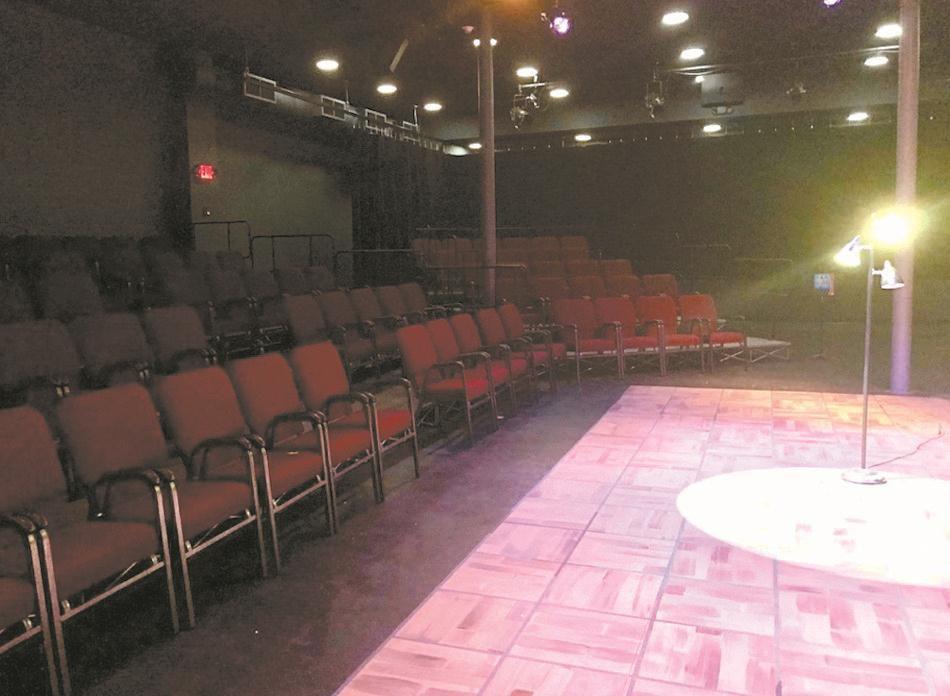 Light shines on an empty stage and empty seats at NSTC. 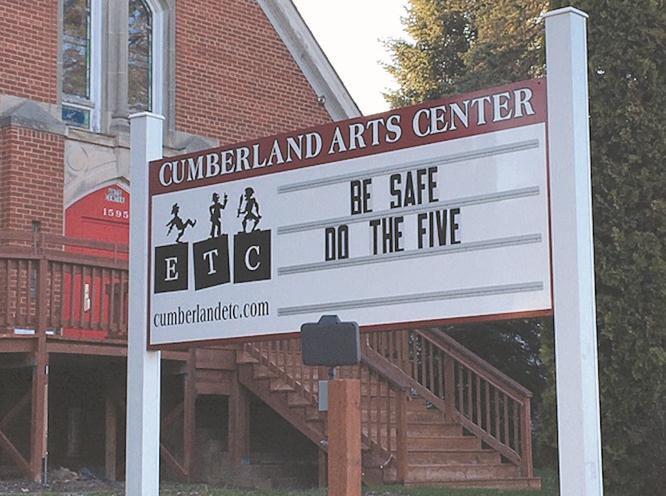 Instead of announcing shows, ETC's new sign says "Be Safe. Do the Five," a World Health Organization safety tip. 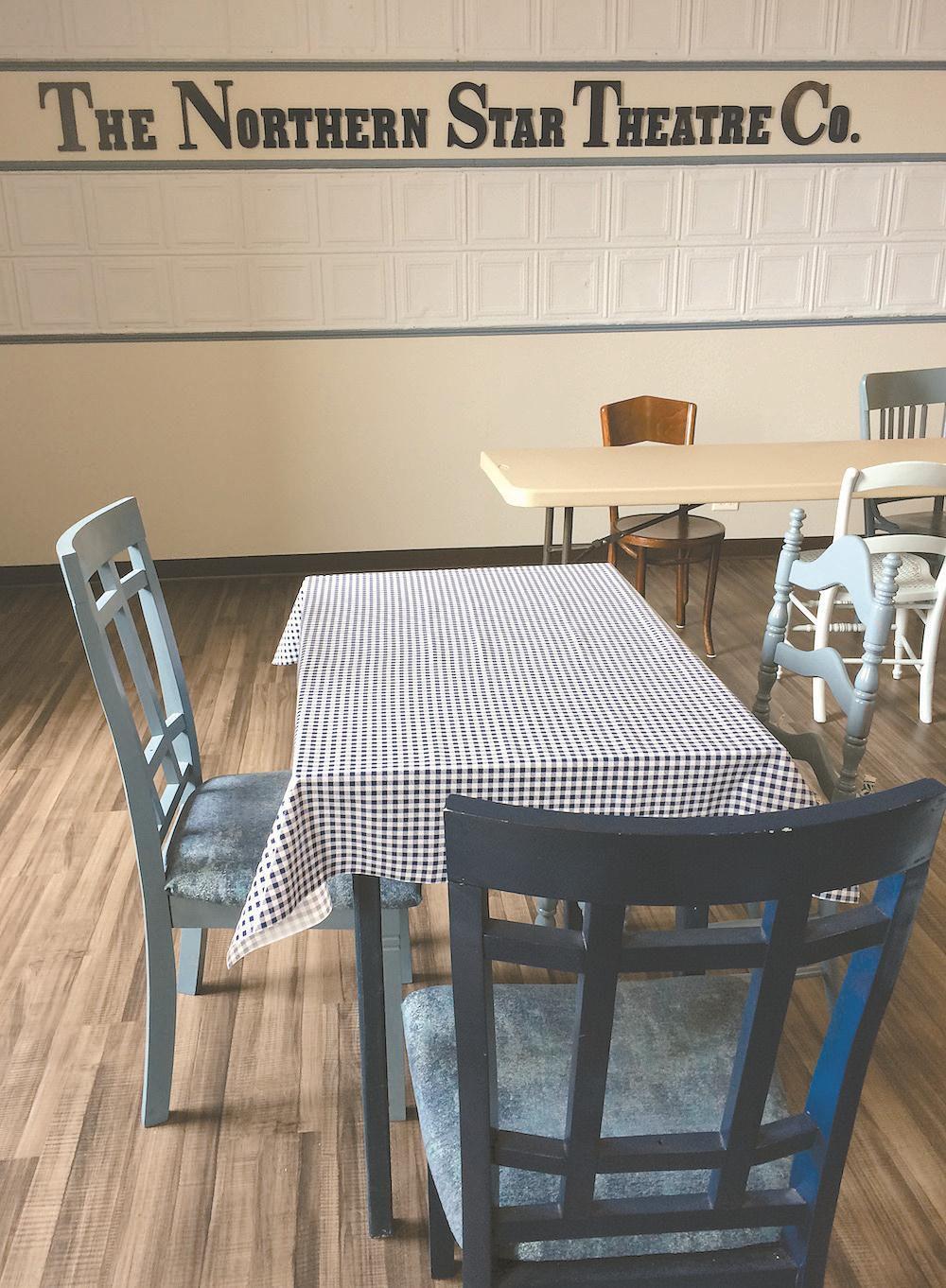 Light shines on an empty stage and empty seats at NSTC.

Instead of announcing shows, ETC's new sign says "Be Safe. Do the Five," a World Health Organization safety tip.

"The show must go on" is not just a phrase spoken by actors; it is a reality from a financial standpoint. All of the county's theater groups are feeling the pain of the coronavirus and Gov. Tony Evers' stay-at-home orders.

Most have had to cancel one or two shows already this spring, and plays and musicals scheduled for summer and fall are in limbo.

"We're dark," said Amy Myers, co-executive director of Northern Star Theatre Company in Rice Lake. "We've had to cancel two shows so far, and we're kind of waiting to see what's going to happen and how to restructure the season if we have to."

Co-executive director Nicolle Sabatke-Orson remarked, "We are missing our theater family, missing our creative outlet, missing sharing emotions of a story with our audience members, missing our community."

She added, "We are working very hard to make sure we will be there, when we are able to gather in person, and return to what we do best, entertain and share experiences—the shared moment of held breath during the perfect moment on stage when the audience is in the story and captured by the characters. The cascade of stage lighting that takes us to another place and the hint from the set that takes us to another time. And the people, the actors that bring characters to life, the costumes they wear, and the audiences that appreciate."

Because of the move from their former site by the Main Street bridge to their new home at the Marshall Twelve building, their 24th season began last June with "Newsies" as their first production at the new site and was to have ended this May with "Boeing, Boeing."

In between those first and last performances, the theater company presented "Young Frankenstein," "Blithe Spirit," "Plaid Tidings" and "Winnie the Pooh." It had to cancel the

Myers said even with the City Council's recommendation to reopen, Northern Star would need a large enough audience to pay a production's rights and royalties.

She is hopeful that Northern Star can still present some of the plays scheduled in their 2020 mini season before getting back on track with a season that follows the calendar year in 2021.

Still on the docket for this year is "The 25th Annual Putnam County Spelling Bee" in June, "The Music Man" in August, "Frozen Junior" for kids ages 8-18 in October and "Elf, the musical" in December.

The uncertainty of how many of the shows will be a go has required Northern Star's executive board to think outside the box.

"We have had to get creative in terms of finances to make up for ticket revenue," she said.

What the executive board came up with on a whim was Virtual Trivia Nights that include prizes. The first was April 25, and the next one is scheduled May 9. Those wanting to participate can find a link on Northern Star's web site at nstcricelake.org or its Facebook page. Signup details can be found both places. A minimum freewill donation of $5-10 is requested; any larger amount is appreciated.

"We had really generous donations the first time," Myers said. "As long as people are interested, we plan to keep them going."

The first Virtual Trivia Night attracted 63 participants making up 23 teams. She said the categories are theater-related but not all questions are theater specific.

"We want to make it so it is applicable to anybody," she said.

Sabatke-Orson commented, "Virtual trivia night is one way we may continue to connect with our theater family and enjoy a night together while practicing safe distancing. We are so thankful for the support from our community during these unprecedented times."

Myers said the executive board is also talking about a virtual cabaret, with players livestreamed from their homes.

As for Northern Star season tickets? "We've had a lot of people who have donated the cost of those shows which we've had to call off," Myers said. "We're appreciative of that. We will honor them in one way or another or roll them over to the next season."

Larry Werner, who serves on the board of Enrichment Through Culture arts council at Cumberland, said it has had to cancel two plays and its Celebration of the Arts fair at Tourist Park.

He added, "We don't yet know whether we will be able to hold our summer concert series on the lake—Island City Music. We are running negative year-to-date to the tune of $10,000."

Werner said, "While we don't have employees to pay, as businesses and other nonprofits do, we have expenses, such as utilities and property taxes on our building. During the past year, we've had to replace a crumbling sidewalk that had become a safety hazard and bought a sign that allows us to post our events. Now, there are no ETC events to post."

Last week he shared, "At our last board meeting, we talked about doing a fundraising concert at the Cumberland Arts Center in August to celebrate ETC's 30th anniversary. But, of course, we don't know if we'd be able to have such an event even then."

An ad running in the Cumberland newspaper states: "Dear friends, during these difficult times, Cumberland ETC has had to cancel many scheduled events, and like everyone else, we're not sure how long it will be before we can open again. When we do open, we can promise you one thing—we're going to put on one heck of a show, and you're all invited.

"Meanwhile, if you have the means to support us financially at this time, we would be so grateful to count you among our members. You can become a member, or make a donation, by going to cumberlandetc.com and clicking on 'Get involved.' Or you can send donations to ETC, P.O. Box 191, Cumberland, 54829."

The Barron Spotlighters does not do season tickets anymore but had to close the curtains in the middle of a show.

"What hurt us is the shut down came during a show," said Ann Leistikow, Spotlighters board president. "We got one weekend in but didn't do the matinee for students and nursing home people or the second weekend. That was March. Our set is still up on stage. We are hoping to get another show in."

Vice president David Blumer remarked, "Complicating matters further, the theater group has not been able to hold inperson board meetings so some of their business items, like nailing down our shows for the upcoming season, has been more difficult.

"We don't know exactly what impact this will have on our summer awards banquet. A date has not been set yet.

"We are at the mercy of whatever the BACC does as it relates to the restrictions as they own the building we perform in and are closed at least for now."

He added, "We hardly ever perform during the summer, but we were planning on having a summer theater camp for kids and have them preform for a summer theatre experience this year. Might still happen, might not."

Blumer said, "We never hold a big audition date for all our shows at once, so that has not been impacted. If for some reason the restrictions get carried into the summer and early fall, the impacts will be much greater. If they don't, our 2020-21 season should pretty much be status quo, assuming we can lock down our shows and performance dates."

"As you may know Governor Tony Evers has extended the Wisconsin Stay at Home order until May 26.

"The health and safety patrons, actors, directors and volunteers remains the theater group's first priority. The Board of Directors is carefully monitoring the rest of the season. Please check its Facebook page and website for updates.

"Unfortunately, due to the cancellation of the first two shows, it will not be accepting season tickets this year. If you already purchased certificates for season tickets you have three options: Request a full refund,. hold the ticket over until 2021 or donate the ticket to the Red Barn. Call 715-234-8301 to make arrangements; individual tickets will be sold for any shows presented."