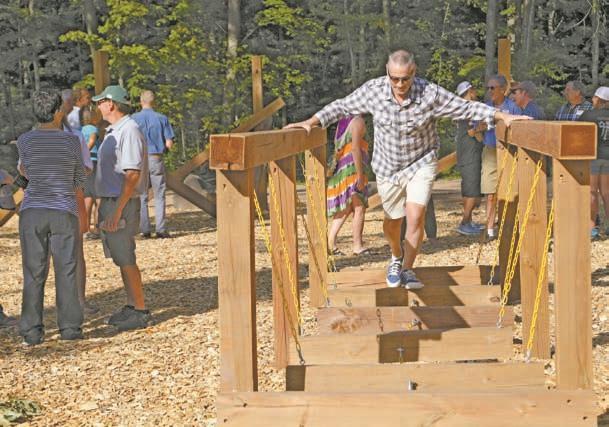 People attending the American Birkebeiner Ski Foundation's annual meeting Saturday, Aug. 10, had a chance to test their balance on the Malnourie GymRage fitness course, which is next to the Samuel C. Johnson Family Outdoor Center at the Hwy. 00 Birkie Trailhead. 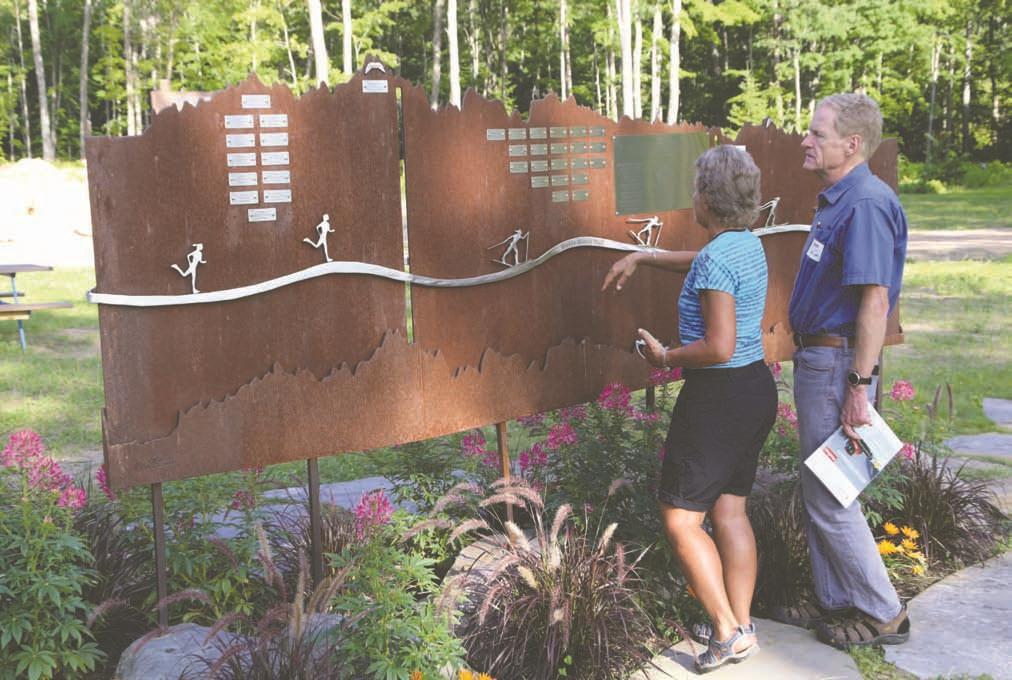 The Birkie Honor Wall, containing names of donors, is outside the Samuel C. Johnson Family Outdoor Center at the Highway 00 Birkie Trailhead.

People attending the American Birkebeiner Ski Foundation's annual meeting Saturday, Aug. 10, had a chance to test their balance on the Malnourie GymRage fitness course, which is next to the Samuel C. Johnson Family Outdoor Center at the Hwy. 00 Birkie Trailhead.

The Birkie Honor Wall, containing names of donors, is outside the Samuel C. Johnson Family Outdoor Center at the Highway 00 Birkie Trailhead.

At its annual meeting Saturday, Aug. 10, the American Birkebeiner Ski Foundation dedicated the new facilities at the Birkebeiner Highway 00 Trailhead, and members heard good news about the Foundation's finances, snow-making capabilities and advances in "going green" for the protection of the outdoor environment.

Members gave a champagne toast at the dedication to all who donated toward the new recreation center and recited a litany of dedication "for the adventure, fitness and fellowship of all who use these new facilities."

Executive Director Ben Popp paid tribute to "the almost 2,400 people who donated to make this (recreational center) happen. The Birkie Trail generates energy from all who use it," he said.

The membership heard speakers from each of the new facilities, indoors and outdoors, at the recreational touring center, which is located adjacent to the Birkie OO and Kortelopet trailheads east of Seeley, halfway between Cable and Hayward.

signed the new center, and building contractors Ben and Rex Droessler. He said almost 100,000 trail users pass through the Highway 00 trailhead each year.

Popp also acknowledged "the huge partnership we have" with land owner Sawyer County.

"This is public land. We feel it's a good partnership on both sides," he said.

Foundation members voted by ballot to fill two vacancies on the board of directors, and incumbents Charlie Dee and Jeff Tumbleson were re-elected. The other candidates were Karen Manske, Kate Constalie and Mark Ignatowski.

Board President Paul Eckerline said, "We had a great year, and a lot of good years leading up to it that made this year possible."

The annual income increased by 14 percent this year, which was "really terrific," Brown said. Expenses were up 6%.

"We're spending money both in expenses and capital. Our events are growing," Brown said. "We're asking you to support this vision. Payroll is up; we're adding staff because we have things going and we need to invest."

The Foundation had $988,333 in capital expenditures at the Highway 00 and Town of Cable start line trailheads, most of which was raised through the Phase 2 capital campaign.

The Foundation had an independent audit of its finances performed by Certified Public Accountants Anderson, Hager and Moe.

"We're living within our means," Brown said. "We should all be thankful for how you (members) and this team chooses to spend money."

Popp said there is "a likelihood" that the new Becker Law Link bridge carrying the Birkie Trail over Highway 77 two miles east of Hayward will be built this fall.

"We want not just hardcore skiers and mountain bikers, but families and people new to the sport to come out and hang out here (at Highway 00) and not feel intimidated," Popp added.

The Birkie Foundation over the past two years also has operated the Lumberjack World Championships and Lumberjack Run.

The Foundation also operates the Trail Kids and Dive for the Dirt recreational programs for youth. Currently 3,740 youth participate in Birkie programs and events and 20 Nordic clubs that are recipients of ABSF youth grants. To date, $551,000 has been awarded in grants to youth sports development.

"We feel this is an investment and time well-spent," Popp said.

This past winter the Foundation started making snow to cover more than three kilometers of trail at the Town of Cable race start area. The snow guns were fed with water via a 2,000-foot pipe from the wells at the former Telemark Resort.

"We learned a lot" from the snow-making experience last year and "we know we will do better this year," Popp said. "Knowing that we had an option (for ski races) was a huge step forward for us. We don't necessarily have to rely just on Mother Nature. We know that we can't run a Birkie on three kilometers of snow, but we can run a lot of high school races."

The Birkebeiner this year "was a really good event as a whole," he added. "Everybody made it from the start to the finish and it was safe. People love it and want to come back."

This past year, the Birkie Foundation spent $391,000 on trail grooming and maintenance, and spent 1,600 hours grooming the Birkie Trail, Popp said.

A new initiative this year is "Operating the Birkie while thinking Green," Popp said. That includes a 25% reduction in paper use, a 10-fold reduction in plastic gear bags, 9,800 reusable Birkie gear bags in use and a reduction in cups by 7,650 in 2019-20.

It also includes passive solar heating, paperless finances, an electric volt car charger at Highway 00, solar lighting and recycling, Popp said. Staff is working with a university professor on an energy audit for the Foundation. "We spend a lot of money on diesel fuel," he mentioned.

Popp added that "We challenge our vendors and sponsors to be good stewards" of energy.

He noted the Foundation this year signed a two-year lease with the owners of the Telemark property, which contains many of the trails that the Foundation uses for high school and other ski meets and snow-making. The lease includes an option to purchase.

The Highway 00 facilities were "built as a touring center. It's not a great event center," Popp said. "It's meant for people (such as the Nordic Kids program) to come and go." But the Birkie start venue off McNaught Road near the former Telemark Resort "was built to foster competition," he said. "You can bring 1,000 people there for a race and it functions really well. It could be the outdoor recreation capital. Our plan is moving forward.

"Our staff are committed; they believe in what they do and are open to input from you," Popp added.

An audience member questioned whether people could contribute money strictly toward grooming the trail. Popp responded that it's possible to have such a dedicated fund; grooming now is part of the general budget and the top priority is making sure the trail is ready for the Birkie race in February. The second priority is maximizing the trail for weekend skiing.

Questioned as to whether the former snow-making equipment at Telemark is still there, Popp said, "It's not in super great shape to be usable; there's a lot of old pipes there."

History of the Birkie

Tom Kelly, who was part of the Telemark staff in the late 1970s and early 1980s under Tony Wise, presented a slide show and talk on how the resort, the Birkebeiner and Worldloppet Series were started and developed by Wise.

John Hallett of Oconomowoc, who has been involved with logrolling at the Lumberjack World Championships since 1977, presented a pewter prototype Birkie Warrior medallion he created. The cast bronze medallions will be presented to Birkebeiner and Kortelopet race champions.