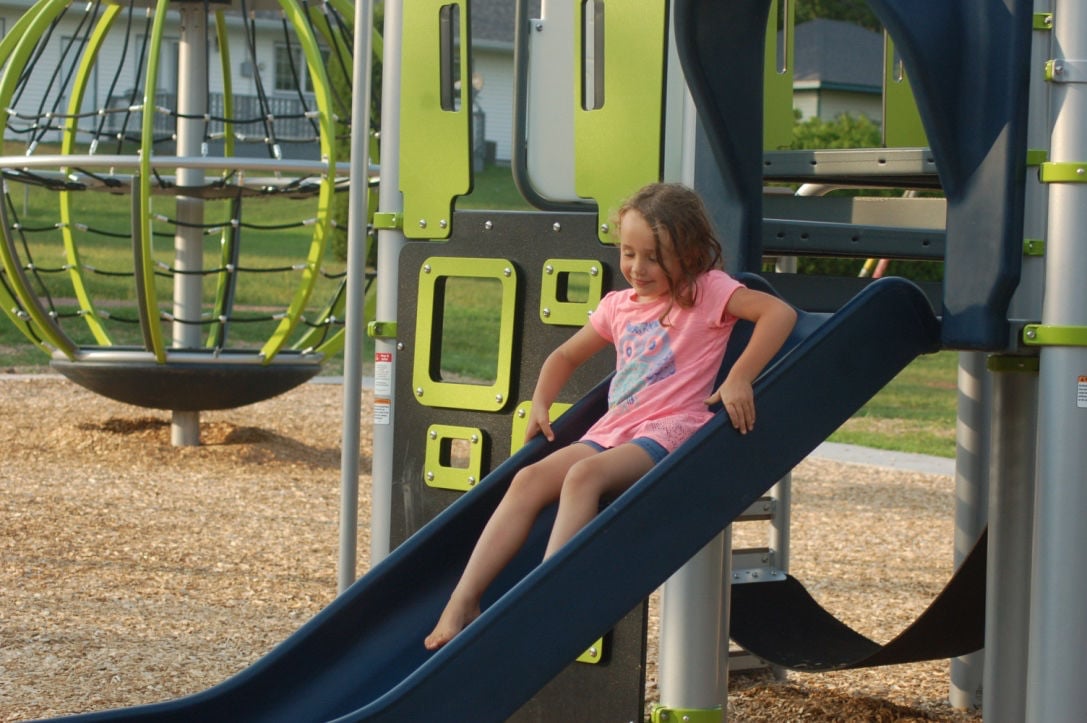 Annika Holmes, 5, enjoys some of the new playground equipment at Jackie’s Field. 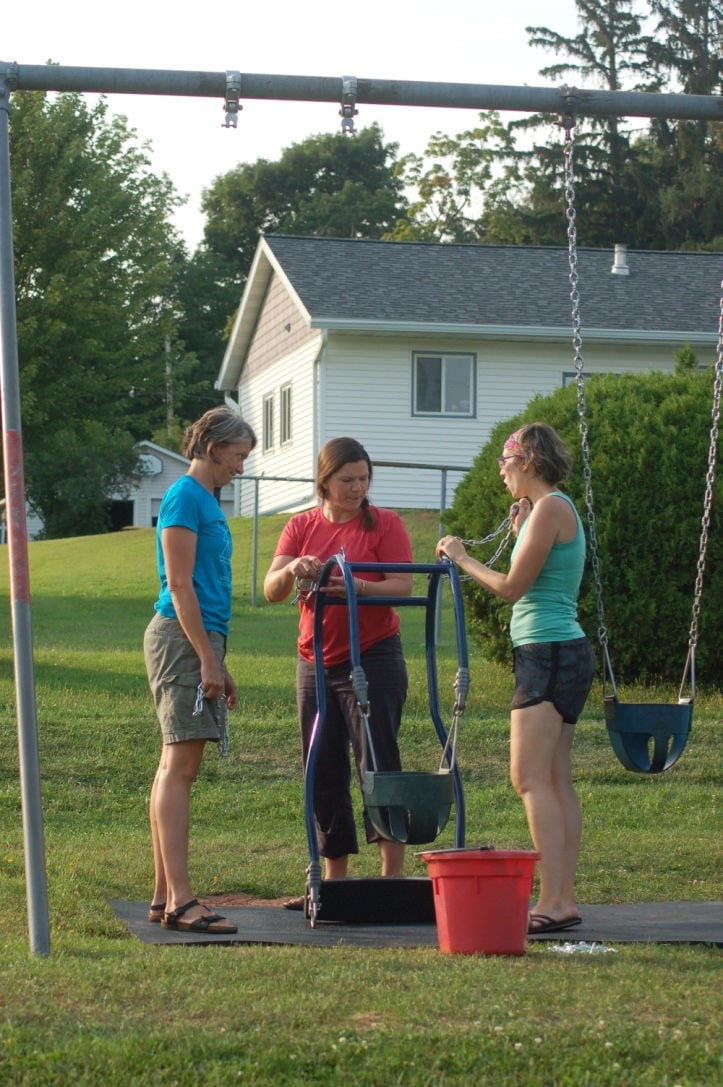 Lisa Weispfenning (from left), Laura Tulowitzky and Shawna Holmes finish up the final upgrades done at Jackie’s Field by installing a new swing that allows parents to swing with their children.

The playground at Jackie’s Field – located on the corner of Third Street and Third Avenue on the east side of Washburn – has received some major updates.

WASHBURN – A two-year effort spearheaded by a grassroots group of local moms has transformed a neighborhood park into a modern play space for kids.

Jackie’s Field playground on the corner of Third Street and Third Avenue on the east side of Washburn previously featured just a few pieces of climbing equipment, some swings and a slide.

But two years ago, Lisa Weispfenning and a number of other local moms who mostly live close by the neighborhood park — Laura Tulowitzky, Shawna Holmes, Sunny Cooper and Jamie Cook – determined that they weren’t happy with the park. Instead of complaining about it, they chose to do something about it.

Weispfenning said the group sought the guidance of Ashland Parks and Recreation Director Sara Hudson, a friend, who guided the moms on how to attack the project and fund it.

The group managed to raise $75,000 with a chili cook-off, dunk tank, spaghetti dinner and a taco fundraiser, along with grant funding and donations.

The brunt of the replacements were done in June over the course of three days with the Playground Moms of Washburn leading a group of more than 65 volunteers through the installation, all under the supervision of a representative from the company Landscape Structures, from which the moms bought new playground equipment.

The moms did a lot of research before contracting with Landscape Structures, Weispfenning said.

“Landscape Structures equipment is the top-of-the-line in the industry,” she said.

The group put in two new big pieces of equipment, one called Global Motion – a giant spinning globe with dual internal levels – and the Americans with Disabilities Act-compliant Venti, which packs 20 exciting activities into its compact size with nets, slides, belts and climbing structures designed to promote physical development and strategic thinking.

As mom’s themselves, the group chose equipment they thought would be both safe and fun for their own children.

“Things that we think would keep them occupied and busy and interacting, and lots to do in one space,” Tulowitzky said.

A cardio air walker and some balance boards have also been included for the entertainment of kids of all ages and adults, Weispfenning said.

“They’re all kind of core, strength-based, (and) really any age can get something out of these,” Tulowitzky said.

The group kept an existing slide and swing set although it did install another set of swings including an ADA model. A few of the moms gathered at the park on Tuesday evening to work on a few finishing touches.

Once everything is completed, the moms will turn over care and maintenance – along with tools – to the city.

Throughout the course of the project, the moms got plenty of help – some of it from close to home.

“It’s definitely a dads thing, too, and there are even people that came down to help that aren’t parents at all. They’re just glad it’s a benefit to the community, it’s good for the neighborhood,” Tulowitzky said. “It all started with a group of moms, that’s why it got that name. (The name) was really kind of a joke when it started because it just sounded funny, the PG Moms, and it just kind of stuck.”

The group is hosting an ice cream social Aug. 22 from 5:30 p.m. to 7:30 p.m. with the city providing ice cream sandwiches to welcome the community to the park.

And as for those for whom the playground was built, it seems they are happy with the end results.

Holmes’s 5-year-old daughter Annika Holmes expressed her delight as she played on the slide.