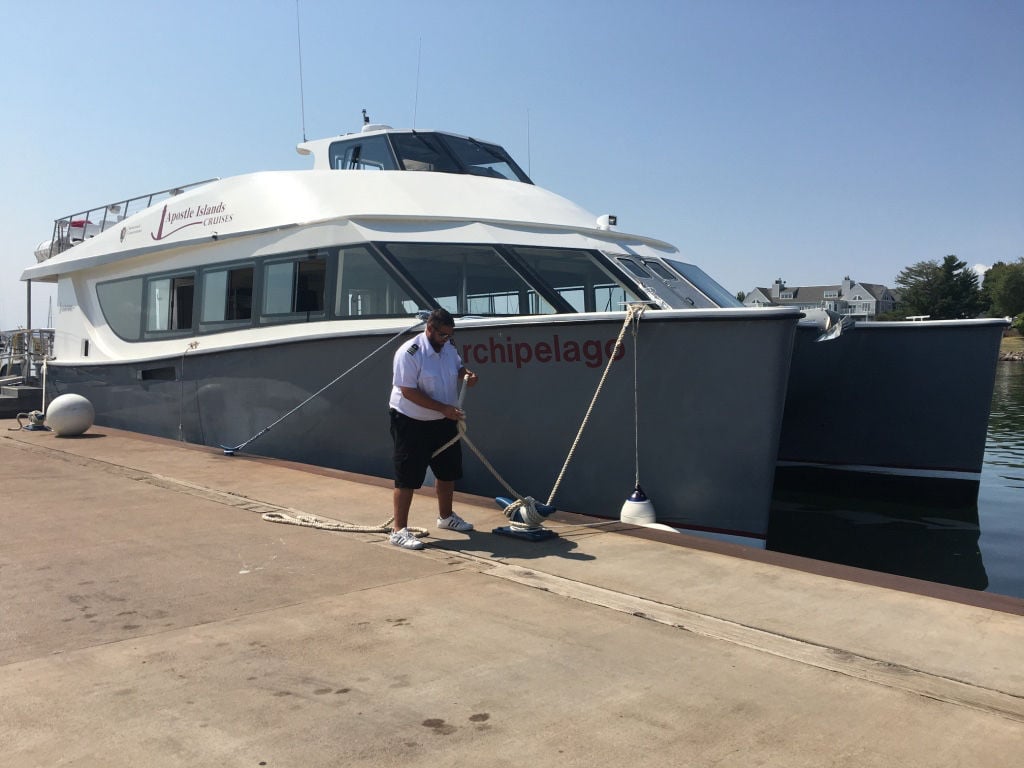 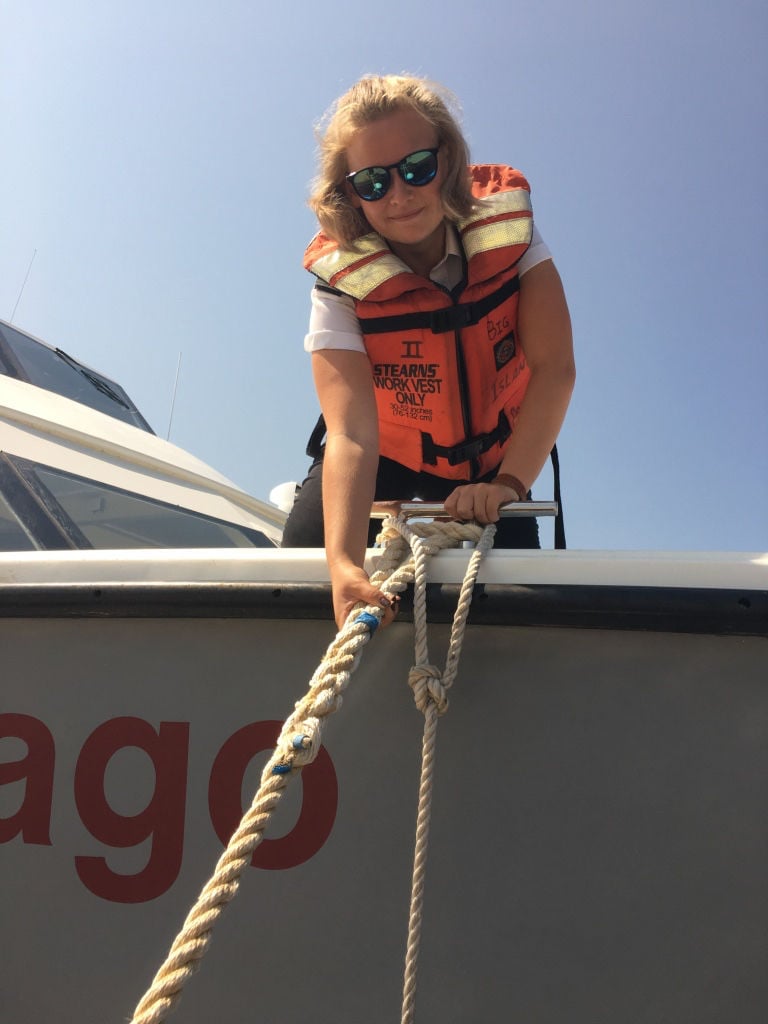 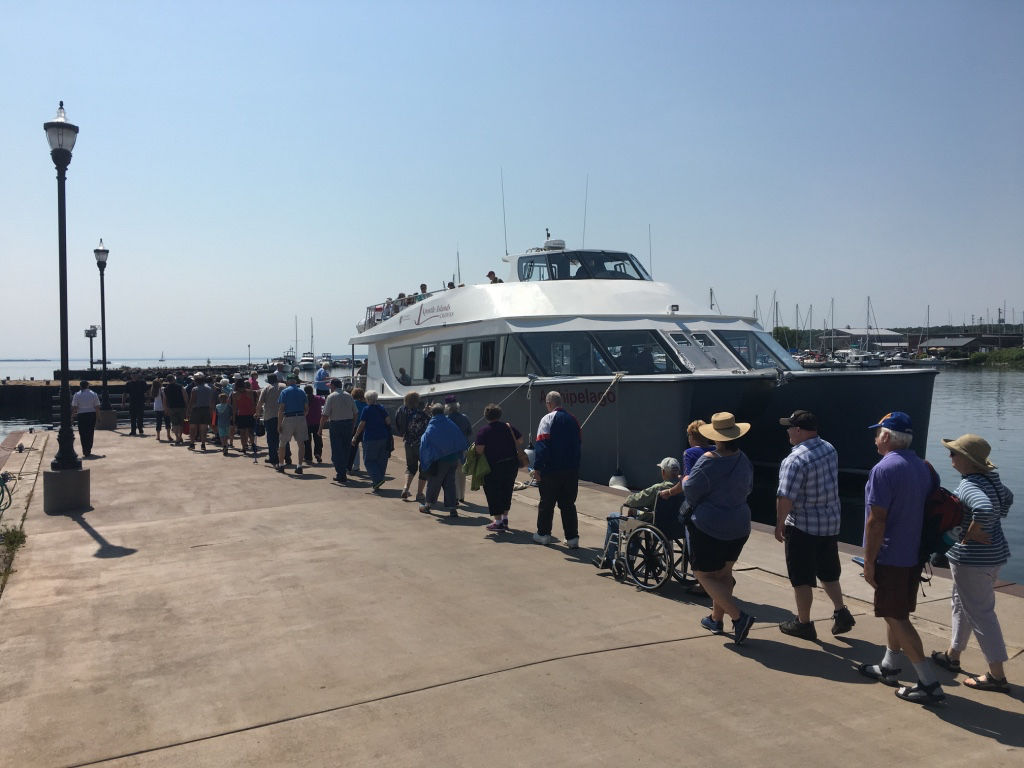 Passengers line up to board Archipelago, the Apostle Islands Cruises new boat. 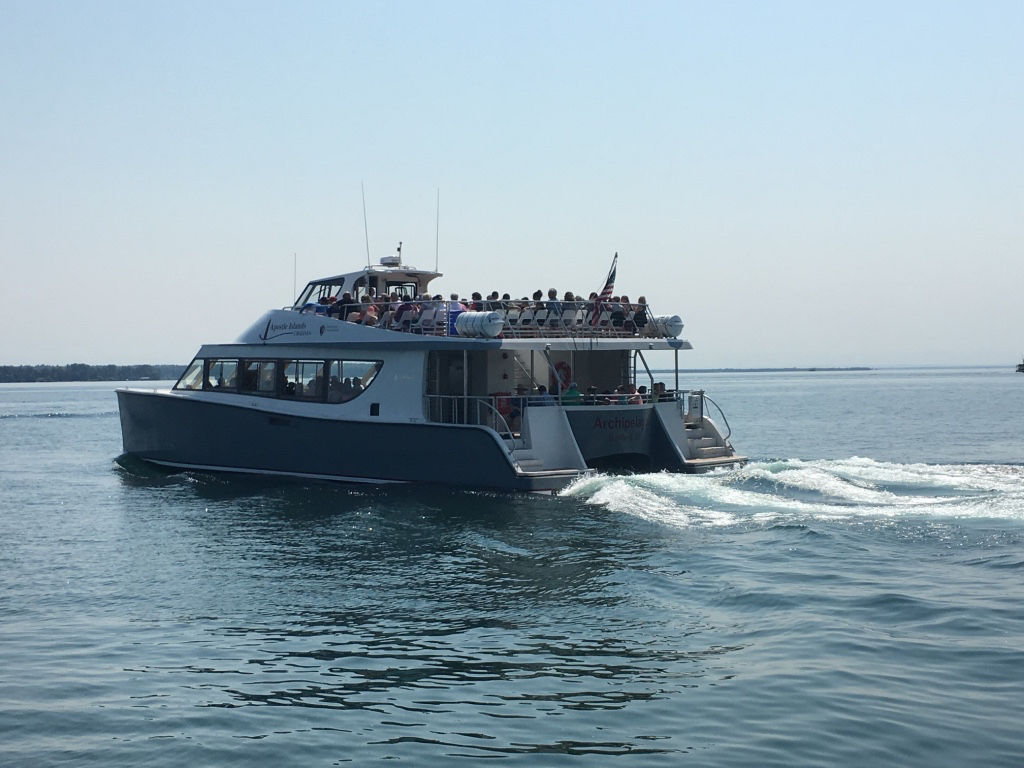 Apostle Islands Cruises new boat Archipelago cruises out of the harbor in Bayfield on a tour. 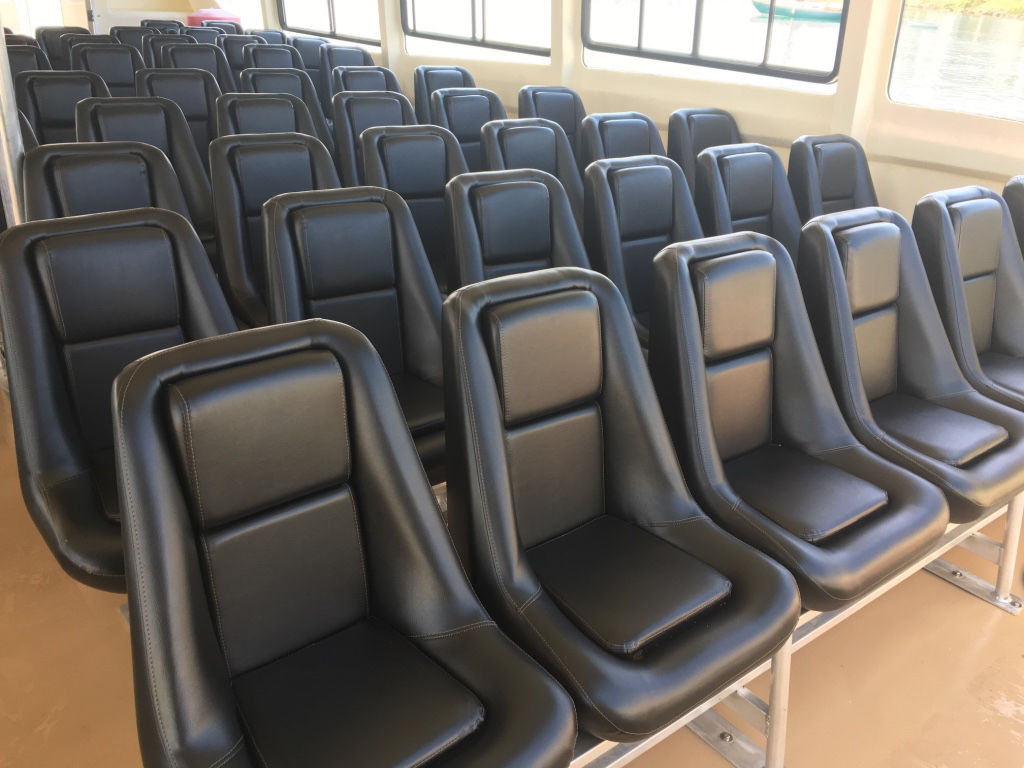 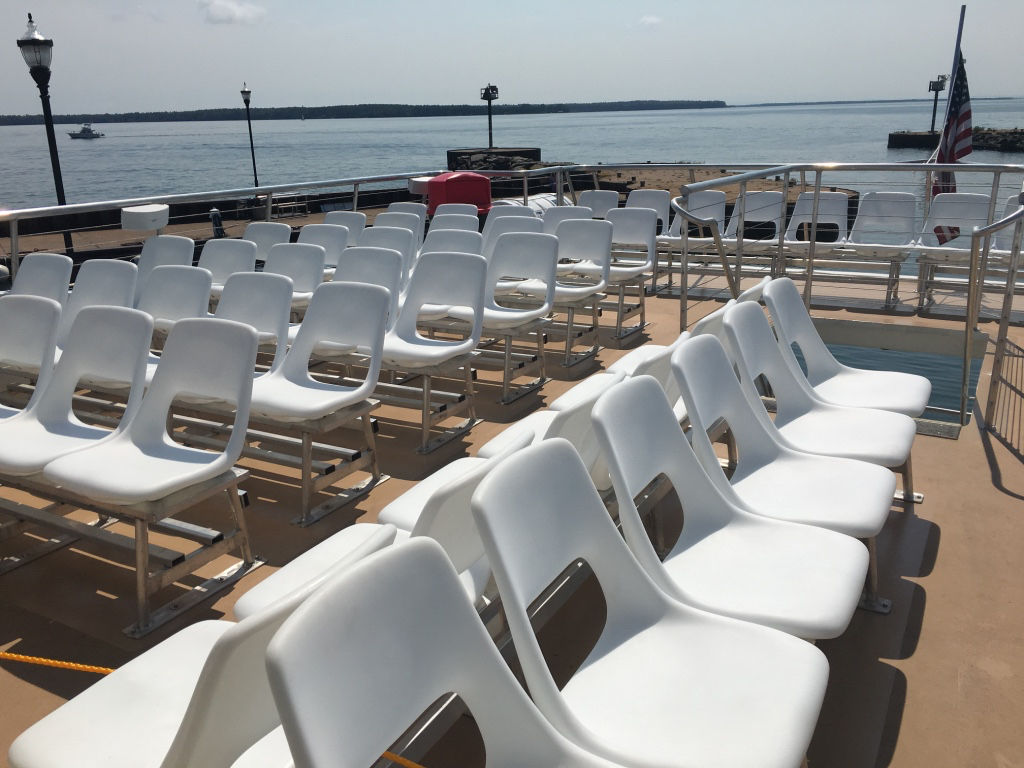 Crewmembers wait for any remaining passengers to board the Apostle Islands Cruises new boat Archipelago before the boat is scheduled to depart on an afternoon tour.

BAYFIELD – Apostle Islands Cruises has added a new vessel to its fleet that will allow it to expand tours around the islands on a ship that is larger and more comfortable than its other boats.

The Archipelago is a 65-foot-long, 28-foot-wide, catamaran-hulled craft intended for tours of 150 people, though it can carry more than 200 passengers. It was custom built by the Sentinel Boat Company before traveling approximately 2200 miles over 14 days up river from Wetumpka, Ala., to the Great Lakes and finally arriving at its home port in Bayfield on Aug. 9.

Apostle Islands Cruises assistant manager Bryce Albrecht said the U.S. Coast Guard conducted its final inspection of the boat the morning after it arrived and the company took it out on its first passenger cruise Aug. 10.

“We’ve been running test runs on it getting our crew trained on it,” he said. “All of our crew has to be able to perform man-overboard drills, fire drills, abandon-ship drills, that kind of thing.”

Albrecht said the company has averaged about one passenger trip a day, while also conducting training necessary for crewmembers.

“We haven’t been running it every day on the trips that we’ve scheduled it on, but we’ve been getting up to speed as fast as we possibly can, no pun intended,” he said.

Once the boat is fully inaugurated, Apostle Islands Cruises intends to run three trips a day on it.

“We are going to run both morning and evening grand tours on this boat and then we are running a new trip on it called the ‘sea caves and lighthouses trip,’” he said. “That one will plan to go out to the mainland sea caves out by Meyers Beach and pass by the Raspberry and Sand Island Lighthouse and will see sea caves on both Sand and the mainland.”

Archipelago is wider and faster than the company’s other main touring boat, the Superior Princess.

The catamaran hull of the Archipelago allows the ship to cruise at 25 mph, significantly faster than the company’s other boats, and it is more stable in choppy water and thus more comfortable for passengers, Albrecht said.

The boat also offers more seating with 92 seats located on the upper deck, 100 seats located inside the passenger cabin and a back row bench that fits about 20 to 25 people by the stern. That will allow the bulk of the ship’s passengers to be outdoors on nice days but indoors when the weather turns nasty – which it is bound to do during an operating season that spans from May to October.

Apostle Islands Cruises deck hand Emily Sherrard is enjoying the Archipelago, which she said still has that “new boat smell.”

“Our grand tours are normally three hours and 15 minutes and now they’re like ... two and a half, three hours so it’s really nice,” said Sherrard. The shorter cruise time allows passengers to get out and see the sights and “still have more time in town to do whatever they want.”

By the end of next week the company is hoping to be running its full schedule and making three trips a day with the Archipelago.

Sherrard encouraged anyone who’s never been out to consider scheduling a tour.

“I would recommend one of the grand tours just because you get to see most of everything, more islands, more history because that’s always fun,” she said. “Everyday is definitely an adventure.”

For more information visit Apostle Islands Cruises online at www.apostleisland.com or call them at 1-800-323-7619.